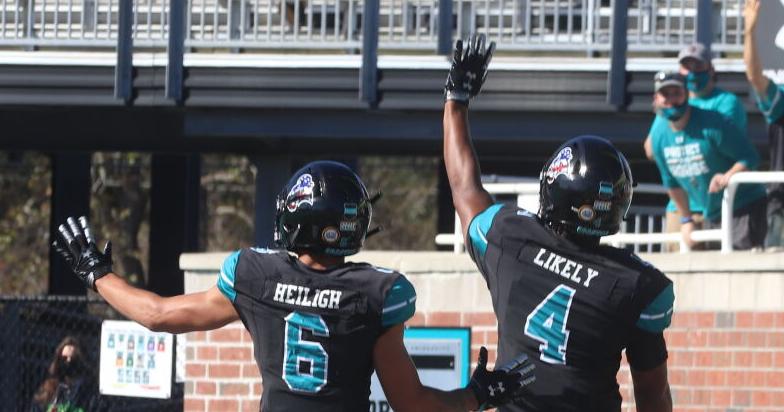 Isaiah Likely and Jaivon Heiligh celebrate a 75-yard touchdown by Likely in Coastal's 34-23 win over Appalachian State on Nov. 21. 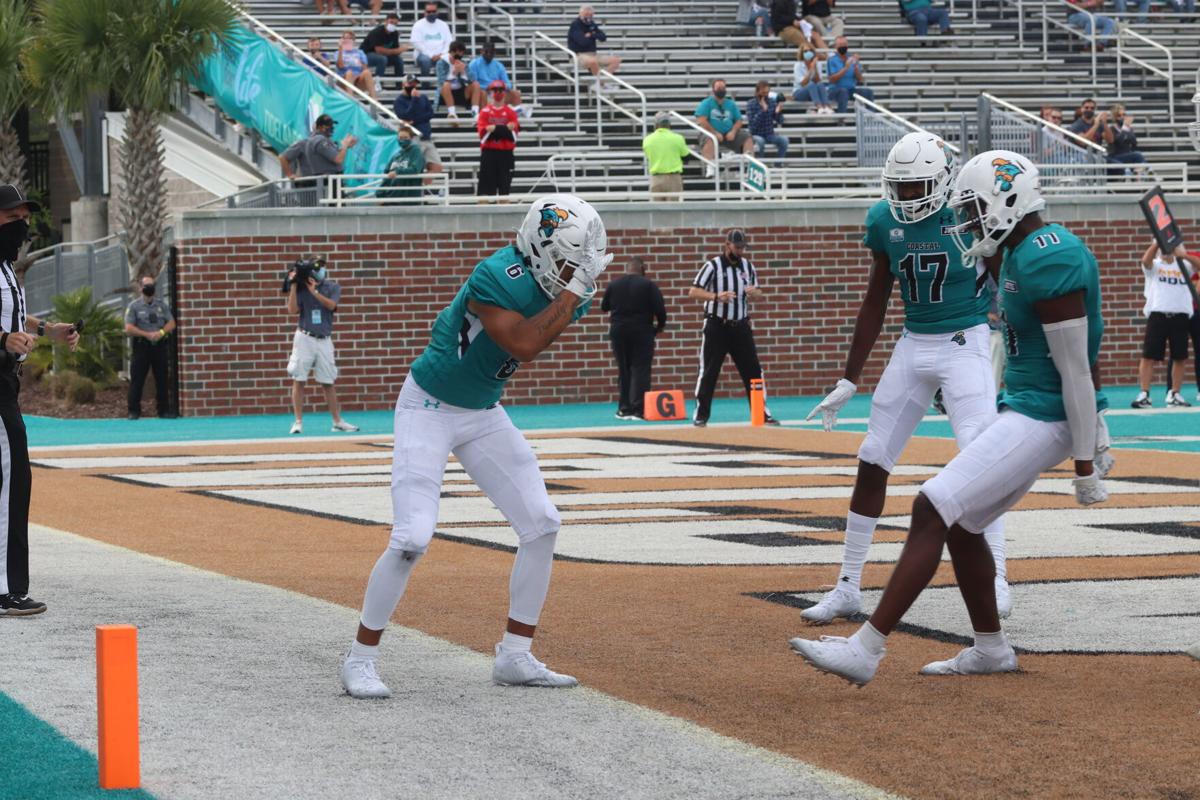 Jaivon Heiligh does a little dance following a touchdown in the Chants 52-23 win over Arkansas State on Oct. 3. 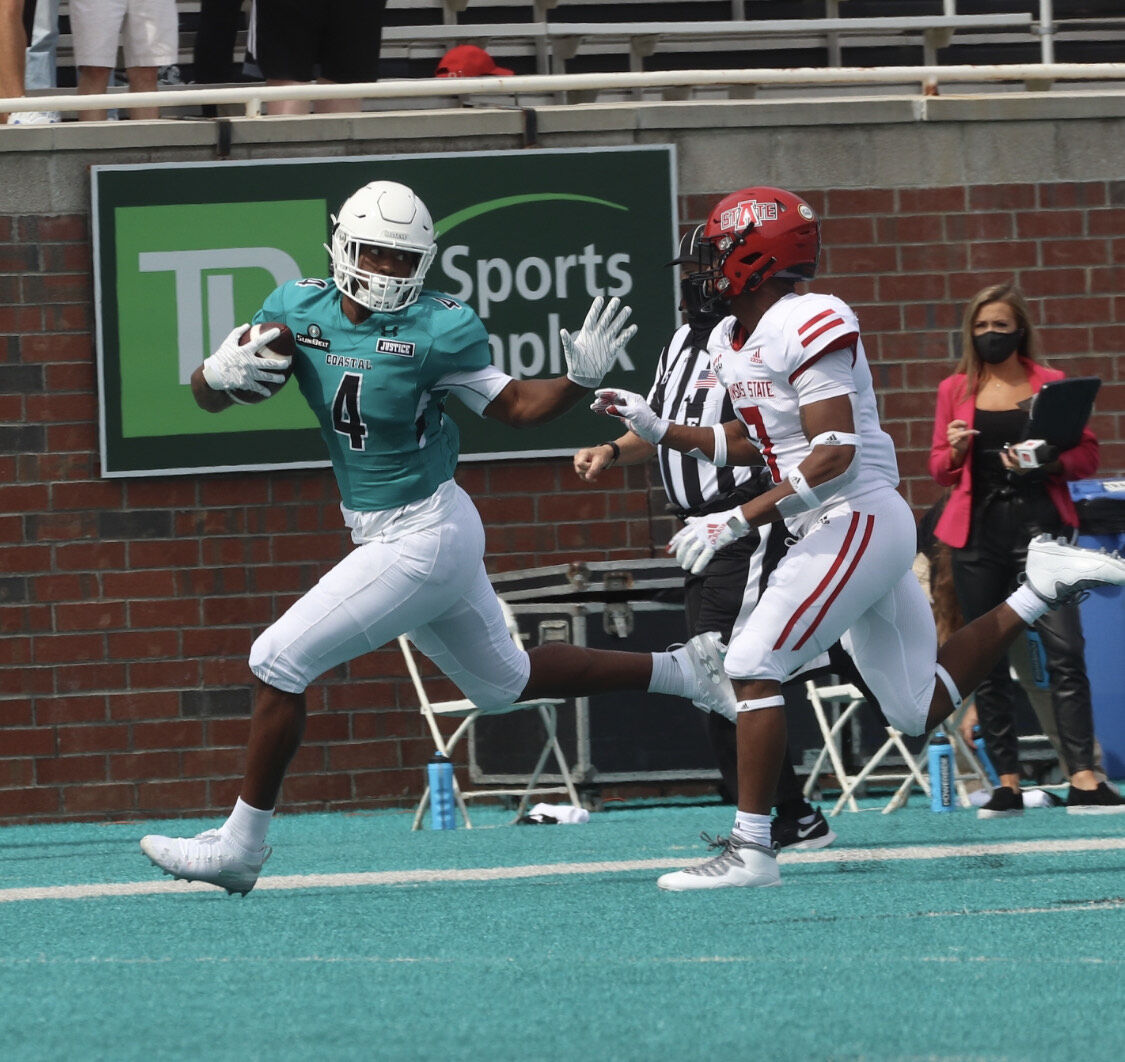 Isaiah Likely stiff arms an Arkansas State player on his way to a 72-yard touchdown in Coastal's 52-23 win over the Red Wolves.

Isaiah Likely and Jaivon Heiligh celebrate a 75-yard touchdown by Likely in Coastal's 34-23 win over Appalachian State on Nov. 21.

Jaivon Heiligh does a little dance following a touchdown in the Chants 52-23 win over Arkansas State on Oct. 3.

Isaiah Likely stiff arms an Arkansas State player on his way to a 72-yard touchdown in Coastal's 52-23 win over the Red Wolves.

In football, there are always great duos. Peyton Manning and Marvin Harrison. Montana and Rice. Bradshaw and Swann. Brady and Gronk.

At Coastal Carolina, there is a "Heiligh Likely" (yes, pronounced "highly likely") threat brewing on the Grand Strand, and it's not slowing down anytime soon.

Junior wide receiver Jaivon Heiligh and junior tight end Isaiah Likely make up the duo that has been the source of some amusing puns and memes.

"We never would've thought of it," Heiligh said. "We never even came up with it, so when it actually did come up we were like 'Wow, that's crazy.' It's funny."

Along with the memes, the duo is also responsible for 1,337 receiving yards this season. Heiligh has 820 and Likely has 517. They make up almost 62% of the team's receiving yards.

"We got weapons everywhere," Coastal quarterback Grayson McCall said. "But those two guys specifically, I have a really good relationship with them. We come off the field and we talk about the play before. We've developed a great relationship and I'm excited for the future with those guys."

The bond between Heiligh and Likely is obvious. Whenever one of them scores, the other is more than likely to be the first one there to celebrate.

"Jaivon's my guy," Isaiah Likely said. "That's really my brother on the field. I'm always like the first, if not the second, person down there when he scores. We understand the feeling that when [either of us] score, we make it feel like [the other] scored as well."

Heiligh said he and Likely have gotten closer since the two came to campus in 2018.

"Off the field, we have gotten a lot closer. We've been hanging out and things like that and I think that's helped to lead to [great play] on the field," Heiligh said, noting that coach Jamey Chadwell is working to create a culture of "brotherhood" within the program.

Heiligh added that while the two have grown closer these past three seasons, they push one another on the practice field to be better.

"We love to compete against each other," Heiligh said.

That hard work and constant battling certainly paid off as the two have helped guide the Chanticleers to an undefeated season. While Heiligh has more receiving yards, it is Likely that has been one of the most explosive players right out of the game. Three of Likely's four touchdowns this season have been for 50 yards are more. In today's game, wide receivers are typically the players that make those deep runs whereas the tight ends are used for blocking or short yardage gains.

Likely's development is something that his teammate attributes to the tight end's work ethic.

"He knows he has a really good chance of making it to the NFL and he's worked really hard to get what he deserves," Heiligh said. "He deserves everything that's going to come him."

The last two seasons have been difficult for CCU and their fans, twice missing out on bowl eligibility by one game. Likely said "trust" was a key factor in the turnaround in 2020.

"Our coaches understood that if we were going to be in crunch time situations, you have to give your weapons the ball," Likely said.

"They're all great quarterbacks," Likely said, giving credit to the three main starters in the past two seasons. "But when you have one solidified quarterback, the chemistry can build because the more little things you understand."

"It's all about timing when you play football," Heiligh said. "You can work on timing a little bit better when it's just one person back there. That's what helped us grow."

The two have certainly grown over the last year and that growth doesn't look to be taking a break. While the two do have a 12-0 season and the program's first ever bowl game on their mind, next season will be here quickly. And they already have some major aspirations.

"The spotlight is going to be on me and Jaivon. We just have to go hard in the offseason and prepare," Likely said. "Everyone is going to have to understand that the Chants are here."

"Win another Sun Belt Championship, be in a New Year's Six bowl and be undefeated all over again," Heiligh said. "That is the goal. That is the goal every year."