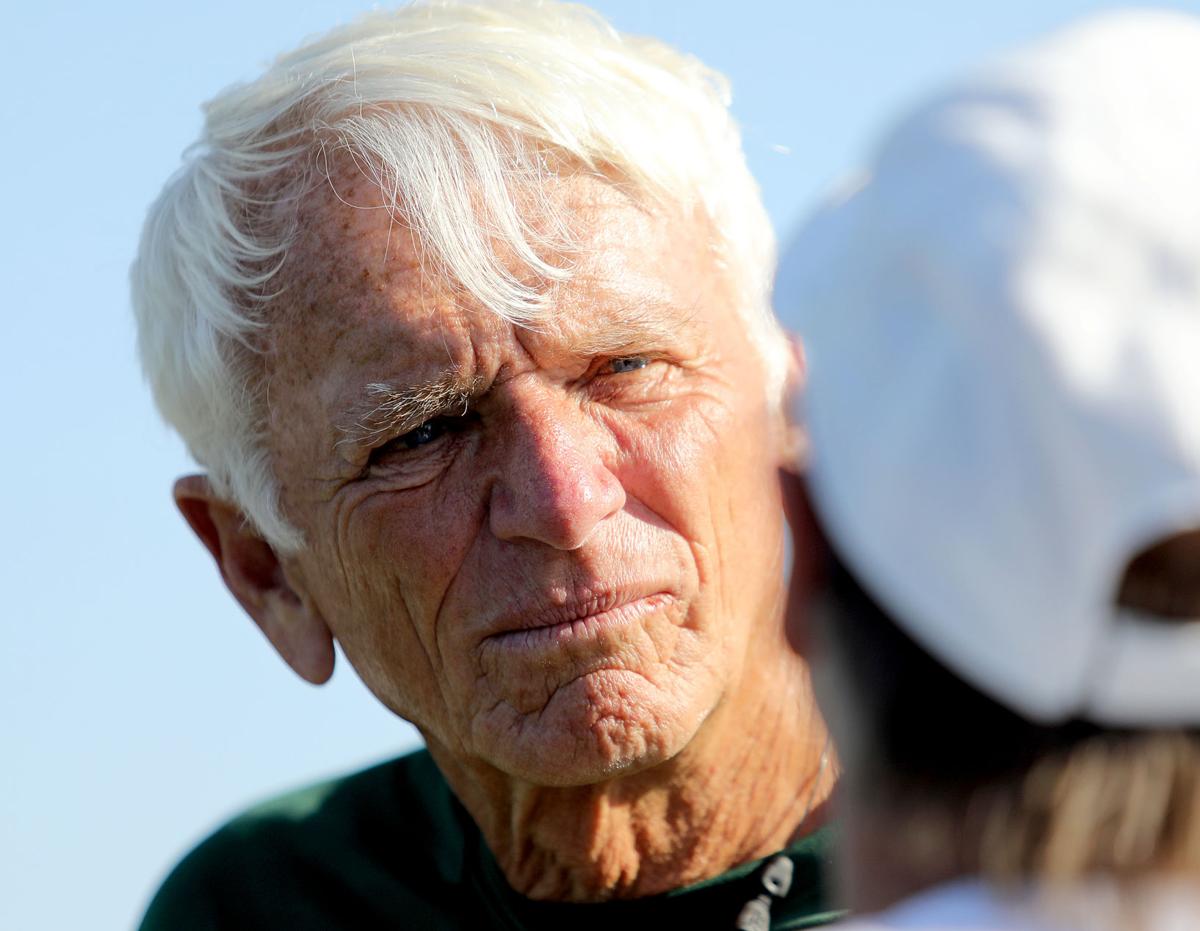 Myrtle Beach High School's tennis coach Rivers Lynch talks to an opposing coach during a match at the high school in May 2018.

Myrtle Beach High School's tennis coach Rivers Lynch talks to his grandson Rivers Cahill after a winning match at the high school in May 2018.

Myrtle Beach High School's tennis coach Rivers Lynch talks to an opposing coach during a match at the high school in May 2018.

Myrtle Beach High School's tennis coach Rivers Lynch talks to his grandson Rivers Cahill after a winning match at the high school in May 2018.

Cookie Goings was barely a teenager, an eighth grader running on the track team for Myrtle Beach High School.

She was preparing for a meet against North Myrtle Beach when the Chiefs’ coach approached her. Goings (nee Canty) will never forget the moments that followed. Or the nearly five decades that did the same.

“Here was this white-haired man and he was coaching me, giving me tips, and I was at the rival school. I have loved him ever since that day in 1973,” Goings said of Rivers Lynch. “He was a very rare individual. All he saw in me was a 13-year old little black girl who was worthy of my time and saw potential. But that was not just me. That was everybody. That was every student he had. There are people who can say that all over Horry County.”

Lynch, the longtime Myrtle Beach and North Myrtle Beach educator and legendary coach, died unexpectedly Sunday morning at the age of 72. He is survived by his wife of 50 years, Teresa, four daughters and their spouses and 12 grandchildren.

And that doesn’t count the Seahawk family that grew year by year after he transferred to Myrtle Beach in 1980. Some learned from his classes teaching driver’s education, biology or in the Graduation Enhancement Program. Still more crafted their experiences from him on the school’s athletic courts and fields.

In addition to his well-documented career leading the Seahawk tennis programs, Lynch also coached girls and boys basketball, volleyball, track and baseball — frequently pitching in wherever the school needed him on a moment’s notice. Each of those squads won more than they lost.

But tennis? Oh boy. That was something special.

Lynch took over the girls program in 1989, and within two years, the Seahawks were among South Carolina’s most dominant programs in the 1990s, regardless of sport.

They won eight state championships in the decade, including six straight from 1991-1996 and two more in 1998 and 1999. Lynch left the squad after that season, but not before amassing just shy of 300 match victories. That figure stands at No. 3 all time in South Carolina High School League recorded history.

He departed that job and served as the Myrtle Beach athletics director for five years before taking over as the boys tennis coach. Much to nobody’s surprise, that Seahawk squad thrived, too.

The Myrtle Beach boys won three consecutive state championships between 2007-2009. After that year, Lynch was forced into a retirement of sorts due to budget cuts within the district. He proved that wasn’t going to work for him, though.

Lynch remained a consistent face at Myrtle Beach sporting events and continued teaching part-time in the district when needed. In 2016, he resumed his duties as the boys tennis coach at Myrtle Beach after the departure of John Hairston. By that time, Lynch had already been a longstanding member of the South Carolina Athletics Coaches Association Hall of Fame, where he was inducted in 2007.

And yet, his coaching success seemed to pale in comparison to the one-on-one relationships he had with seemingly everyone who came in contact with him.

The Seahawks’ current athletics director, John Cahill, knows that better than most.

Lynch “facilitated” his daughter Te-Anne’s budding relationship with Cahill, then a senior at the high school. The two later married.

“He loved everybody and wanted to make a difference in everybody’s life,” Cahill said. “He always asked people what they needed, always with a smile. He cared about what was going on in their life.”

Because of that — not the 11 times his name appears on state championship banners in the gym or the countless more occurrences in various records books — Lynch embodied the Myrtle Beach High mantra. In many ways, it was patterned after him.

Sunday was a day of mourning for thousands who had crossed his path and would always remember his trademark smile and know it was genuine.

“He made each person feel as though they resided in that special place,” Goings said. “His definition of family has nothing to do with blood.”