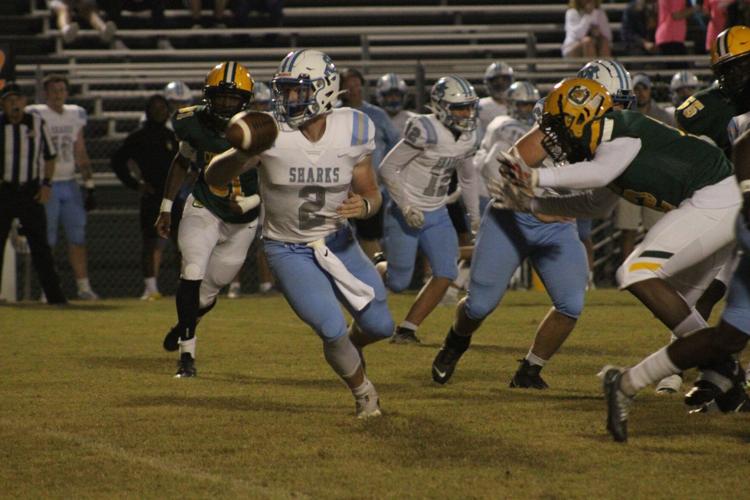 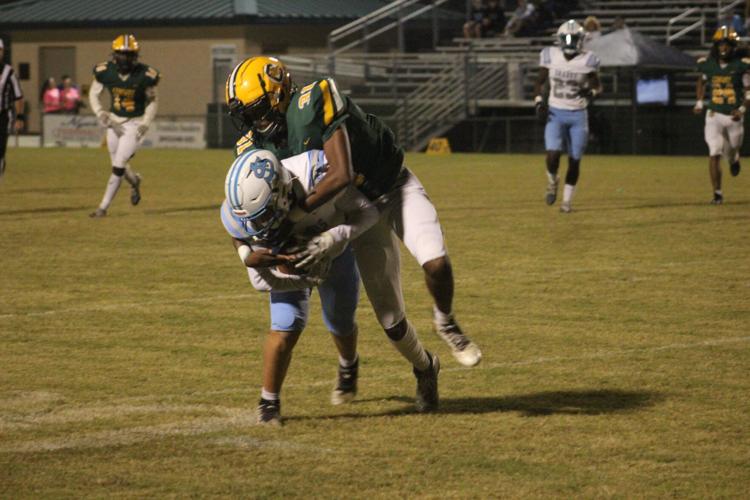 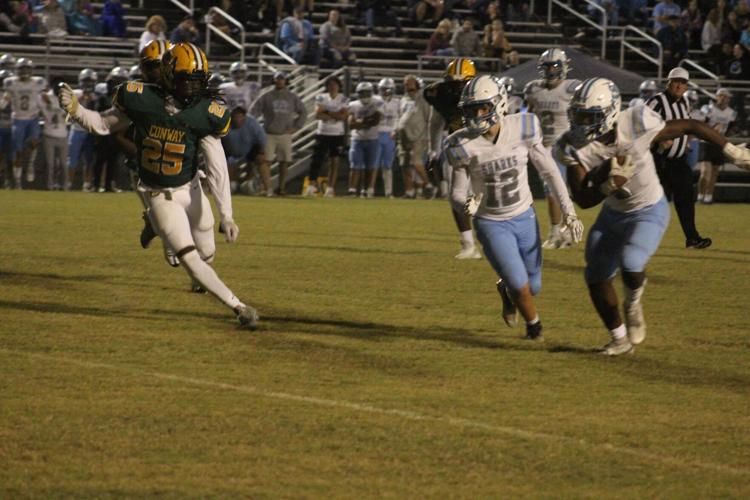 Before Wednesday’s game, Tommy Norwood noticed his team was on a streak.

It wasn’t one he was proud of.

“We played as bad eight quarters of football the previous two games as you could play,” the St. James coach said, referring to his team’s losses to Stratford and Ashley Ridge. “And tonight, we didn’t even look like the same group.”

The Sharks opened region play Wednesday by beating Conway 34-6. Despite the game being pushed up two days because of Hurricane Ian, the team looked sharp throughout the contest, scoring offensive and defensive touchdowns and largely containing the Tigers’ standout quarterback Devin Grainger.

“We just executed as good as we have ever executed in the five years I’ve been the head coach,” Norwood said. “Our kids just came to play and they did a tremendous job.”

The Tigers looked like they would start hot on their opening drive when Grainger turned a broken play into a 73-yard weave to the end zone. But a Conway personal foul negated the score and the Tigers’ drive ultimately ended in a turnover on downs at the St. James 22. The Sharks then responded with a 13-play drive punctuated by quarterback Connor Schwalm tossing a screen pass to running back Markey Faulkner, who went 15 yards to paydirt with 2:05 left in the first quarter.

The Sharks extended the lead to 14-0 on a 3-yard TD run by Scbwalm with just under 10 minutes to play in the second quarter.

St. James looked like they might pull away early when Grainger appeared to fumble the ball and the Sharks recovered, but the officials ruled that Grainger had thrown an incomplete pass. On the next play, the Conway quarterback found Derek Grant for a 27-yard touchdown. Conway missed the PAT, leaving the game at 14-6.

St. James had an opportunity to add to its lead just before halftime, but a 43-yard field goal attempt came up short as time expired.

The second half was all St. James.

On a fourth-and-3, Schwalm went to the air and found wideout Ben Sandt for a 21-yard touchdown pass with 7:26 left in the third quarter. Then came the backbreaker. Ja’Saan Faulkner stepped in front of Grainger’s pass and returned it 80 yards for a score.

“I was waiting,” Faulkner said. “I’d seen the quarterback’s eyes. I’d seen he was about to throw it. And I waited and just went up.”

Faulkner, who added an exclamation point on the night with an 18-yard TD run in the fourth quarter, praised the efforts of the defense.

For St. James (4-3, 1-0 region), this week’s win is a critical step toward breaking another unfortunate streak. The Sharks haven’t made the playoffs since 2015. Ending that run is one of Norwood’s goals, and it’s part of his efforts to change the culture of the long-struggling program.

“They’ve got to expect to win, not hope to win,” he said. “We’re getting closer. We’re not there all the way.”