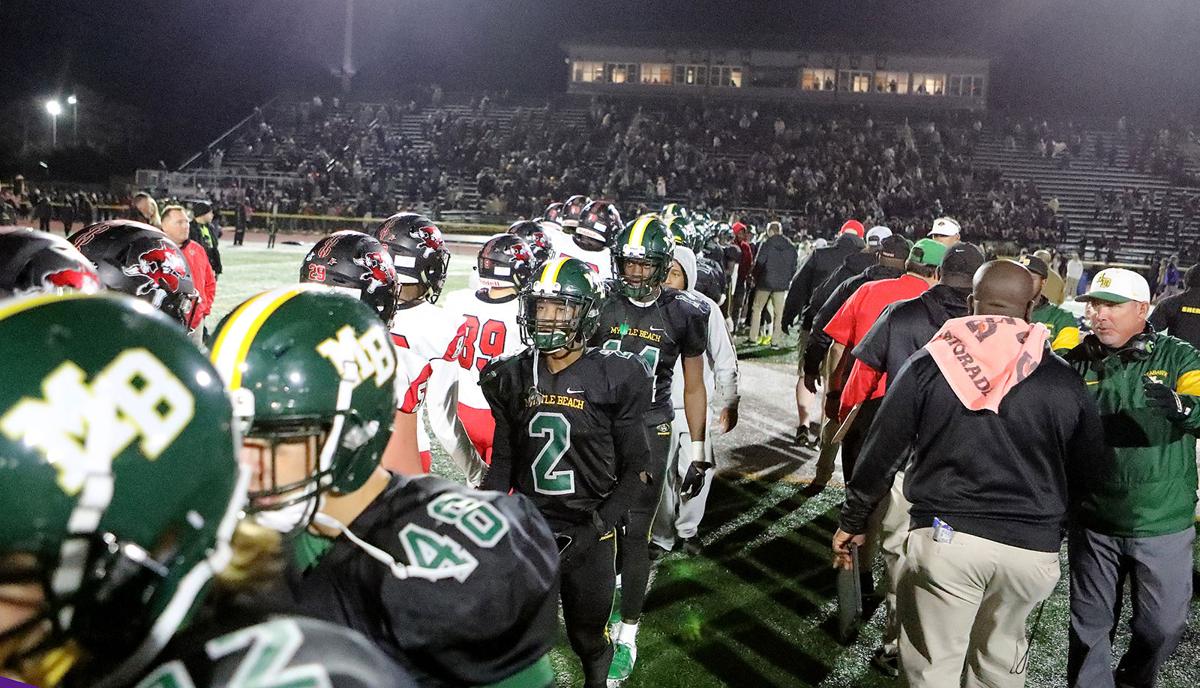 Myrtle Beach celebrates the win over Hartsville on Friday. Myrtle Beach won 28-21 and are the lower state champions. Photo by Janet Morgan/janet.morgan@myhorrynews.com 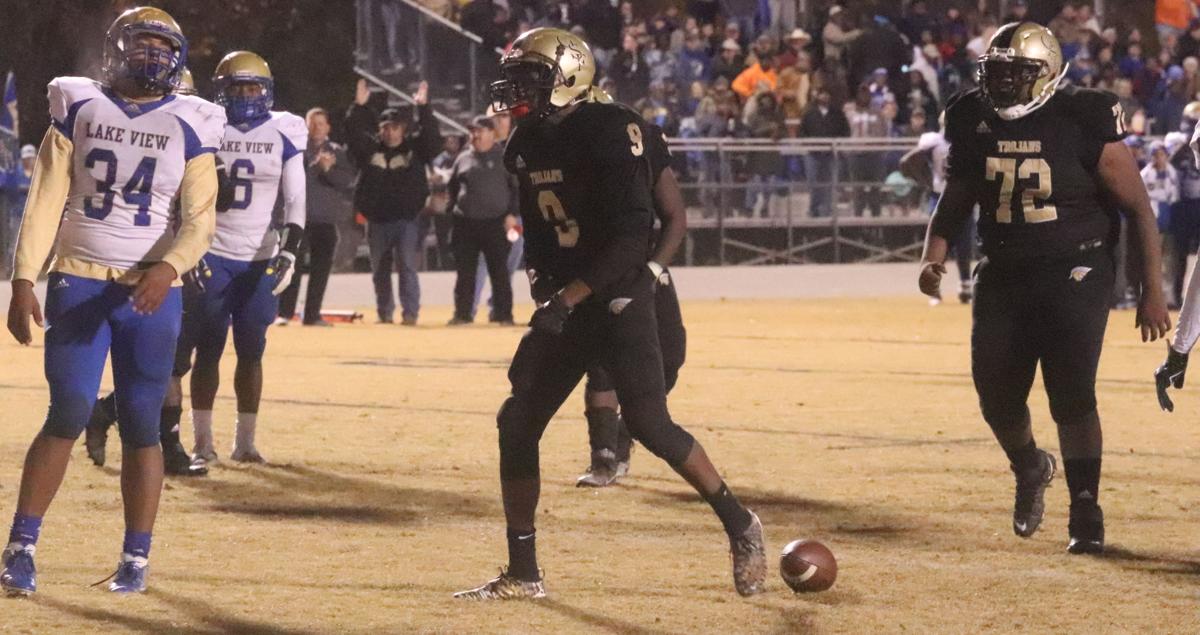 Myrtle Beach celebrates the win over Hartsville on Friday. Myrtle Beach won 28-21 and are the lower state champions. Photo by Janet Morgan/janet.morgan@myhorrynews.com

There are new faces and players in different positions.

But the locations and magnitude of the moment? That will be something that won’t catch Myrtle Beach and Green Sea Floyds off-guard.

The bulk of the two programs’ rosters are intact from a year ago, when the Seahawks and Trojans won state championships. So this week — when Green Sea Floyds takes on Ridge Spring-Monetta and Myrtle Beach plays Wren for a chance at a title — there won’t be some of the same guesswork associated with the trip to Columbia.

“You’ve got a situation where you have some seniors who know what’s going to happen this week,” Seahawks coach Mickey Wilson said. “Nothing will be a big shock or a surprise to them. They’ll be able to help our inexperienced guys. They know what to expect from a preparation standpoint. They know how to block out that outside noise. You’ll have that outside noise when you’re playing for a state championship.”

Green Sea Floyds will take on Ridge Spring-Monetta in the Class A finals at approximately 8 p.m. Friday at Benedict College’s Charlie W. Johnson Stadium. The next day, Myrtle Beach will play Wren in the Class 4A championship at University of South Carolina’s Williams-Brice Stadium.

This is the first time that Wren has qualified for a state championship in more than six decades of football. Ridge Spring-Monetta has been there before, but not since 2006, when it lost in the Class A, Division II final.

Meanwhile, so much of what the two Horry County programs will be doing this week is much of the same as it was last December, albeit with even less craziness.

South Carolina High School League officials aren’t anticipating any need to change the schedules like they did a year ago when threats of inclement weather forced the SCHSL to move up the Class 3A, 4A and 5A one day — leaving all five championships played on the same day. All of that came after the playoffs were pushed back one week due to the flooding associated with Hurricane Florence.

Both programs will offer pre-sale ticket opportunities for fans.

Regardless of purchase location (pre-sale or at Benedict/USC), tickets are $12 each. However, the schools receive $2 of each ticket sold during the advanced windows; the split disbursements after the fact - as many teams discovered last season - can be minimal and frequently don’t off-set some of the travel costs associated with playing in the game.

Members of all 10 state finals teams will be in Columbia Monday morning and afternoon for the regularly scheduled news conferences. After that, they’ll return home, and for Myrtle Beach and Green Sea Floyds, they hope to take advantage of what can be a relatively normal game week in terms of practices.

Both teams will go as scheduled Monday through Thursday.

Myrtle Beach’s super block of schools will be released from classes for a team sendoff at approximately 9 a.m. Friday morning. At that time, the Seahawks will be paraded around the grounds before boarding the buses and hitting the road.

They will stop at Schoolhouse Bar-B-Que in Scranton (outside Lake City) in what has become a tradition for the team over the last decade during extended road trips.

“It’s hard to eat there for a regular game because the kids eat too much,” Wilson said. “It’s a buffet, so we’ll let the kids pig out a little bit.”

The Seahawks will do a walk through at USC’s practice fields late afternoon and then tour Williams-Brice before getting settled at a hotel near campus and having a catered dinner there.

For Green Sea Floyds, Friday’s schedule will be a bit more clear cut. Thanks to an 8 p.m. kickoff, the team will be sent off at approximately 2 p.m.—- fans are also invited to participate — make its way to Columbia, eat a pre-game meal and then start getting ready at Johnson Stadium.

Myrtle Beach quarterback Luke Doty will be evaluated daily leading up to Saturday’s game to determine his status. He injured his right hand in the playoff opener against Lakewood and has been in a brace ever since. Wilson said that if Doty is cleared to play, he will do so, even if that means a change to a different position. … The Seahawks will be going after their ninth state championship. Currently, only six schools in the state — Gaffney (16), Summerville (12), Byrnes (11), Woodruff (10), Abbeville (10) and Lake View (nine) — have reached the figure. Each of Myrtle Beach’s first eight championships came against a different opponent. … Green Sea Floyds’ 11 wins this season are a program best. The Trojans’ previous high was 10, which they reached in 2018. … Unlike a year ago, when Green Sea Floyds was considered the upstart heading into the title game against Lamar, Donnie Kiefer’s team will be considered a heavy favorite against Ridge Spring-Monetta. Also named the Trojans, RS-M was a No. 3 seed for the playoffs and had to win four games (versus Green Sea Floyds playing just three postseason games) to reach Columbia.