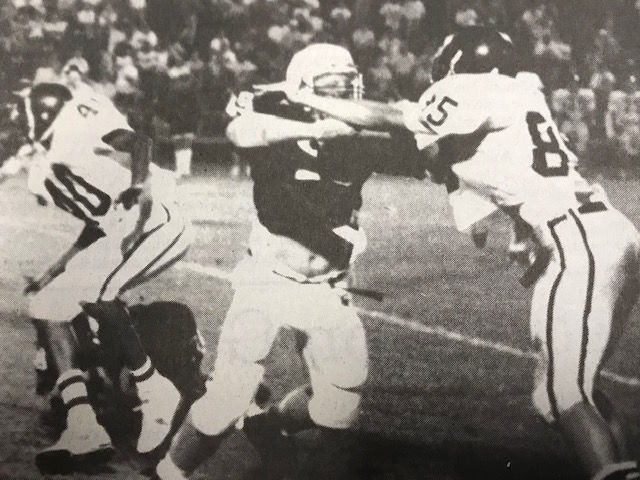 This photo was taken during the first CNB Kickoff Classic in 1990. 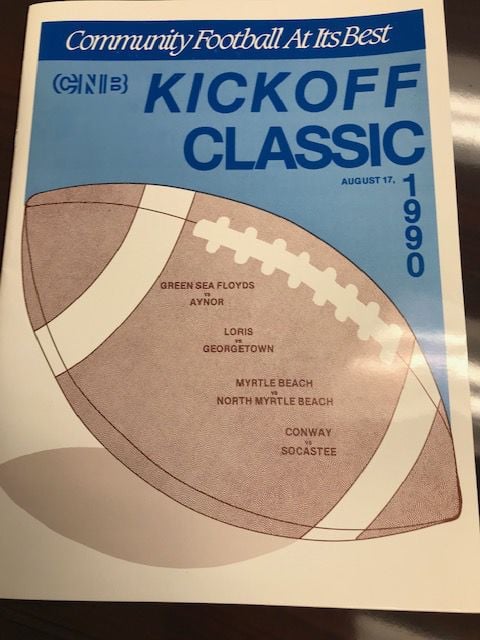 This is the program for the first CNB Kickoff Classic in 1990. 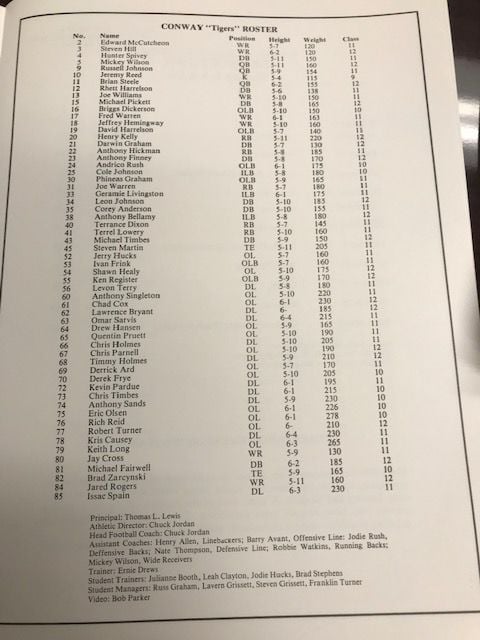 This is the Conway Tigers roster from 1990, the first year of the CNB Kickoff Classic. 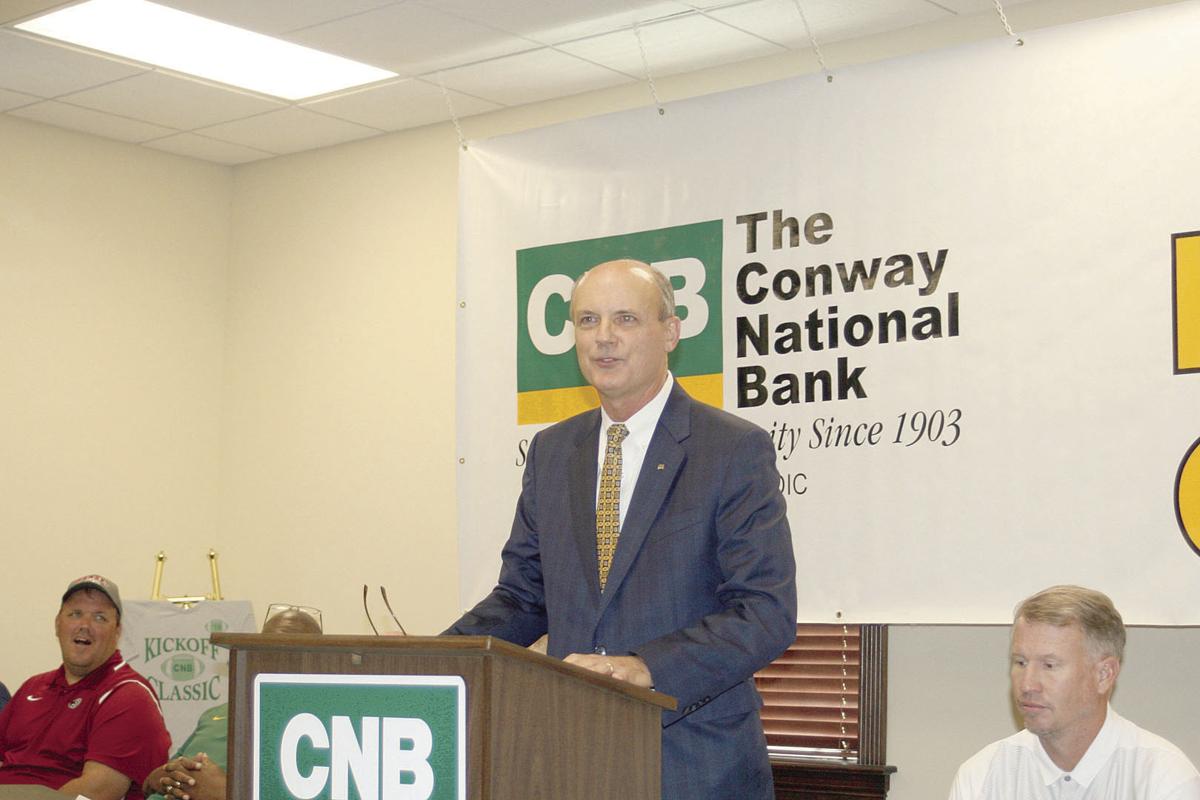 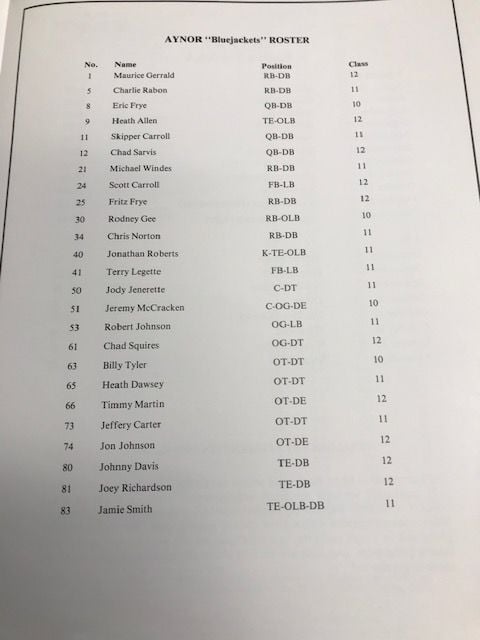 This is the Aynor Blue Jackets roster from 1990, the first year of the CNB Kickoff Classic. 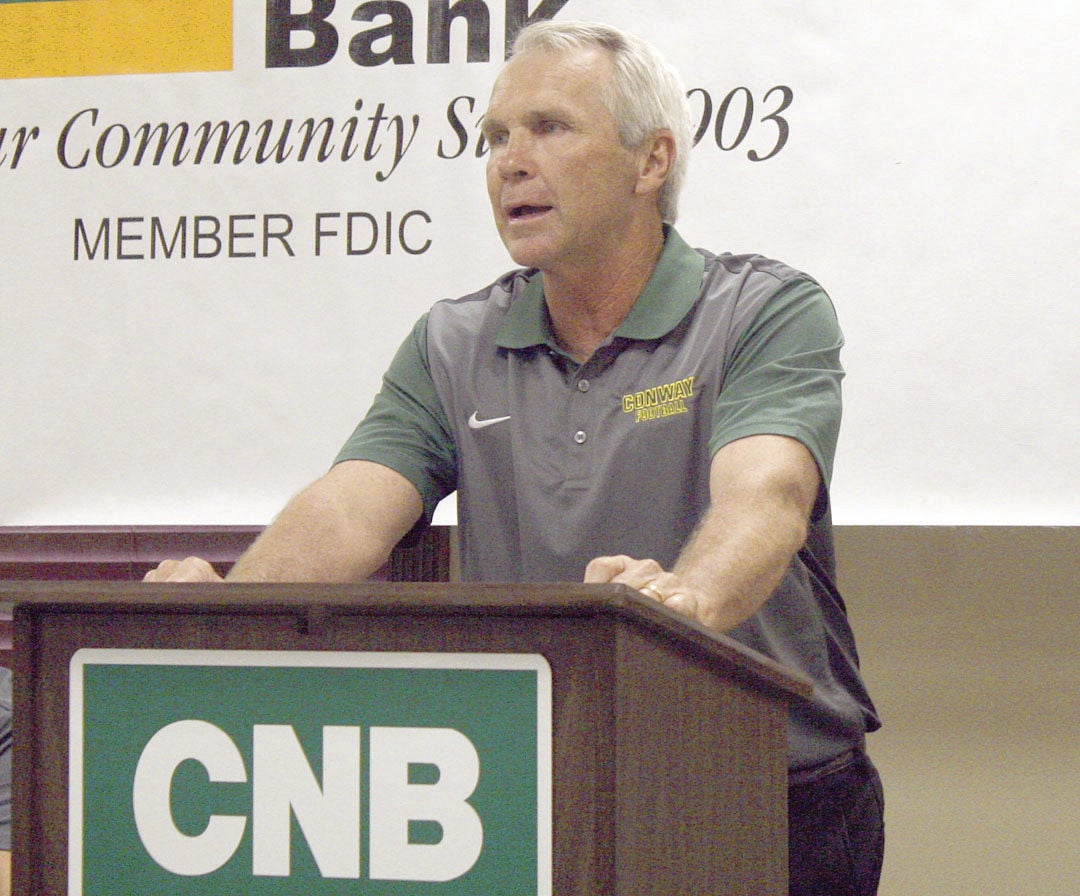 Conway's Chuck Jordan has coached in most of the Conway National Bank Kickoff Classic events. 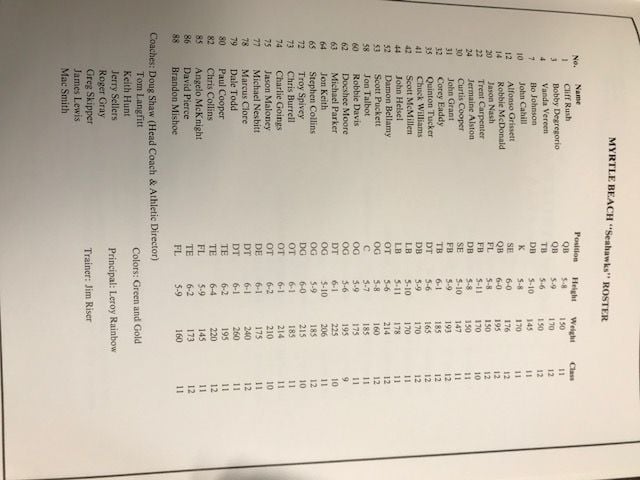 This is the Myrtle Beach Seahawks roster from 1990, the first year of the CNB Kickoff Classic. 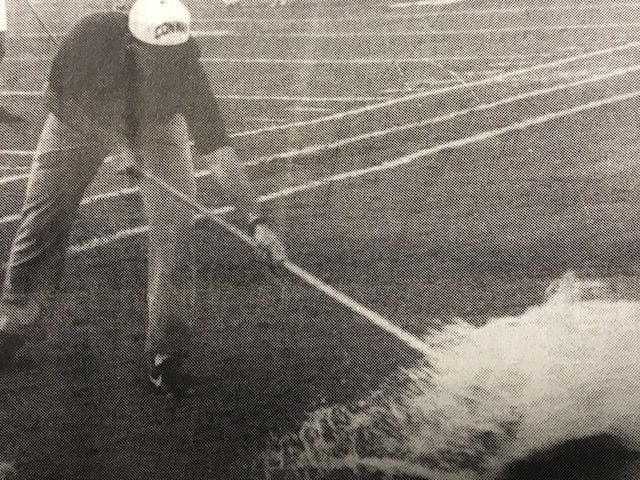 Former Conway High coach Chuck Jordan sweeps water off the field at The Graveyard, where used to Conway played its home football games, during the 1991 CNB Kickoff Classic.

During a phone call with his old high school coach a few weeks ago, Mickey Wilson had an epiphany.

“Coach, is this the 30th anniversary of the Kickoff Classic?” the Myrtle Beach High football coach asked.

“It absolutely is,” replied Chuck Jordan, the former Conway High coach who helped start the annual jamboree in 1990.

Wilson started doing the math. That would have been his senior year.

“I actually played in the first one,” he said. “That’s kind of neat.”

Sure enough, the program from the inaugural Conway National Bank Kickoff Classic lists Wilson as the Conway Tigers’ No. 5 — a 5-foot-11, 160-pound quarterback. But he wasn’t the only future coach who played in the first Classic. Myrtle Beach High athletics director John Cahill was a kicker for the Seahawks that year. And Aynor baseball coach Chad Sarvis played quarterback for the Blue Jackets while his teammate, former Aynor football coach Jody Jenerette, battled in the trenches as a lineman. Those are just a few of the recognizable names.

In a way, it’s fitting that so many participants would go on to play key roles in local sports programs. Since its inception, that’s been the purpose behind the Classic: Bringing local folks together to celebrate the start of high school football.

“I know you’re going to hear that over and over and over,” said Jenerette, who is now the football coach at West Florence High. “But it actually does because nobody cares about who’s scrimmaging until that jamboree. … The only thing they care about is ‘Who have you got in the jamboree?' That’s the first thing they are going to ask you. In 2019, that aspect of high school football is disappearing. A lot of jamborees are fading away. I’m glad it’s still intact. I’m glad they are still doing a good job with it, and nobody does a better job than Conway National.”

That’s exactly what Chuck Jordan thought when he reached out to his former Tiger teammate Jennings Duncan about the Classic some 30 years ago.

At the time, the annual preseason football event had a smaller profile. Jordan believed the bank could make it something special.

Duncan, the bank’s president, had been friends with Jordan for decades — he played quarterback for Conway when Jordan was a defensive back there — and the two men often talked at a Bible study. When Jordan mentioned the jamboree idea, Duncan told him to stop by the bank and talk it over.

“I just happened to be walking by the office,” said Mitch Godwin, the bank’s longtime compliance officer. “Jennings said, ‘Come here a minute. … Chuck’s got an idea.’ … That’s what planted the seed.”

They spent about a year traveling to other high school jamborees that were managed by banks. There was one in Hartsville and another to Wilmington, North Carolina. The bankers learned about everything from booster clubs to concession stands.

The bank’s leadership ultimately agreed to take over the Classic, but only on certain conditions.

Some of the players who were there don’t remember much about that first event. Horry Independent clippings show that Wilson was three-for-four passing that night and Sarvis threw for a touchdown.

But this was certain: that’s the day Horry County officially had a starting point for the high school football season.

“It’s bringing all the schools together in a good environment,” Duncan, the bank president, said. “It’s a cohesive event. And you see that through the eyes of the coaches. Sure, they’re competitive. But on this night, it’s a scrimmage. You’re getting better. I’m getting better. It’s a dress rehearsal.”

Over the years, the Classic has generally followed the same formula.

There’s a press conference a few days before the jamboree. It's more like a roast where the coaches pick on each other and, sometimes, the reporters in attendance. The bank provides T-shirts for the players, coaches and cheerleaders. There are no vendors and there’s limited marketing.

“We’ve worked hard to keep it that way,” said Terrance Herriott, an assistant vice president at the bank who played in the Classic as a Myrtle Beach Seahawk in the 1990s. “We wanted to keep it about the student-athletes, about the schools participating and [we wanted] all the focus to be on them.”

On the big night, there are normally dozens of bank employees volunteering to spend hours working the gates, cooking the hot dog chili and hauling ice.

“I mainly like to give out the programs because I get to talk to people,” said Carol Butler, the operations manager at CNB’s Conway office on Fourth Avenue who started volunteering at the Classic when she came to work at the bank in 1991. About 10 years ago, she watched her youngest son, Tyler, play for the Tigers in the event. “That concession [stand] is so busy, busy, you don’t get to do a lot of talking. But I like to stand at the gate and give out programs so I can greet everybody and talk a little bit. … You get to see people from area schools that you hadn’t seen in awhile. Everybody comes to this event.”

As the county’s population grew, so did the number of schools. Carolina Forest and St. James started playing in the Classic. The jamboree now includes all nine Horry County high schools and Waccamaw High. The schools come from the bank’s coverage area, which includes Horry and the Waccamaw Neck.

The games were originally played at Conway High’s former field — dubbed The Graveyard — which was on Coastal’s campus. For a few years in the middle of the last decade, it was held at Coastal’s main football stadium. There was also a rotation between Conway’s stadium and Myrtle Beach’s.

The event returns to Coastal this year. It will be played at the school’s newly renovated Brooks Stadium.

“How ironic is the 30th anniversary that it’s going to be played at Coastal, where the first one was played at the old Graveyard stadium?” Wilson said.

The bank approached Coastal about hosting the 30th edition of the Classic, but they didn’t want it to be a one-time event. For Coastal, the move was also beneficial, bringing local people to the university who otherwise might not visit.

“There’s a lot of kids that won’t be able to move on to the next level of college football that can enjoy that atmosphere in that stadium,” said Jonathan Jenerette, who works in the bank’s loan department. “It’s just a very, very neat thing to do for a high school player, especially a younger high school player going out there into that crowd, that field and that atmosphere.”

“We never have a shortage [of volunteers],” he said. “Whenever they send out that email about working, there’s not a follow-up email. They’re not having to beg people to work at it.”

But how long will it last?

The Classic hasn’t been without hiccups. A downpour in the 1991 jamboree dumped so much water on the field that the football coach and the bank president swept off puddles with brooms. There have been a few rainouts (2013 and 2017). Lightning cut some Classics short. In 1997, the arrival of the Dixie Youth World Series in Conway forced organizers to push up the date, cancel the press conference and not distribute any programs.

Those, however, were isolated incidents. Bank officials hope the partnership with Coastal succeeds.

Could the Classic last another 30 years?

“Sure, it can,” Godwin said. “The bank has been around for over 116 years. We think the Classic is just getting started.”