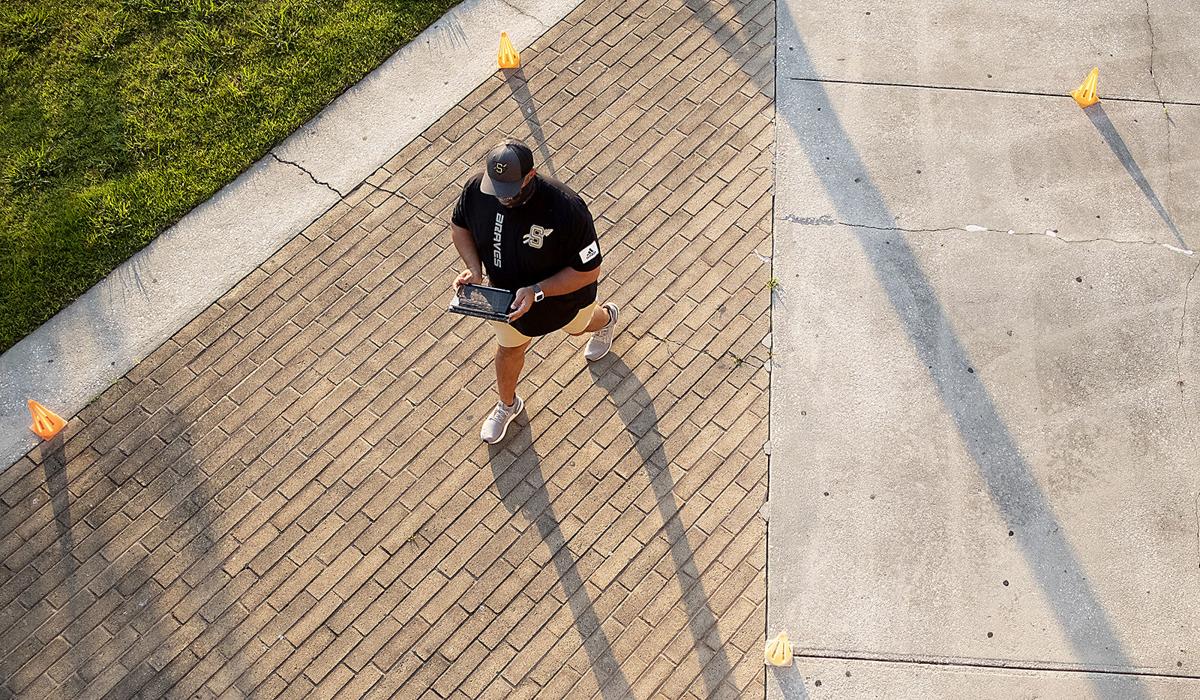 Ben Hampton, Socastee’s new coach, gets prepared to send football players through conditioning exercises in Horry County’s first phase of opening for the season last week. The phase limited groups to 10 at a time, enforced social distancing, a facemask requirement when not exercising and hand sanitizing often. Photo by Janet Morgan/janet.morgan@myhorrynews.com 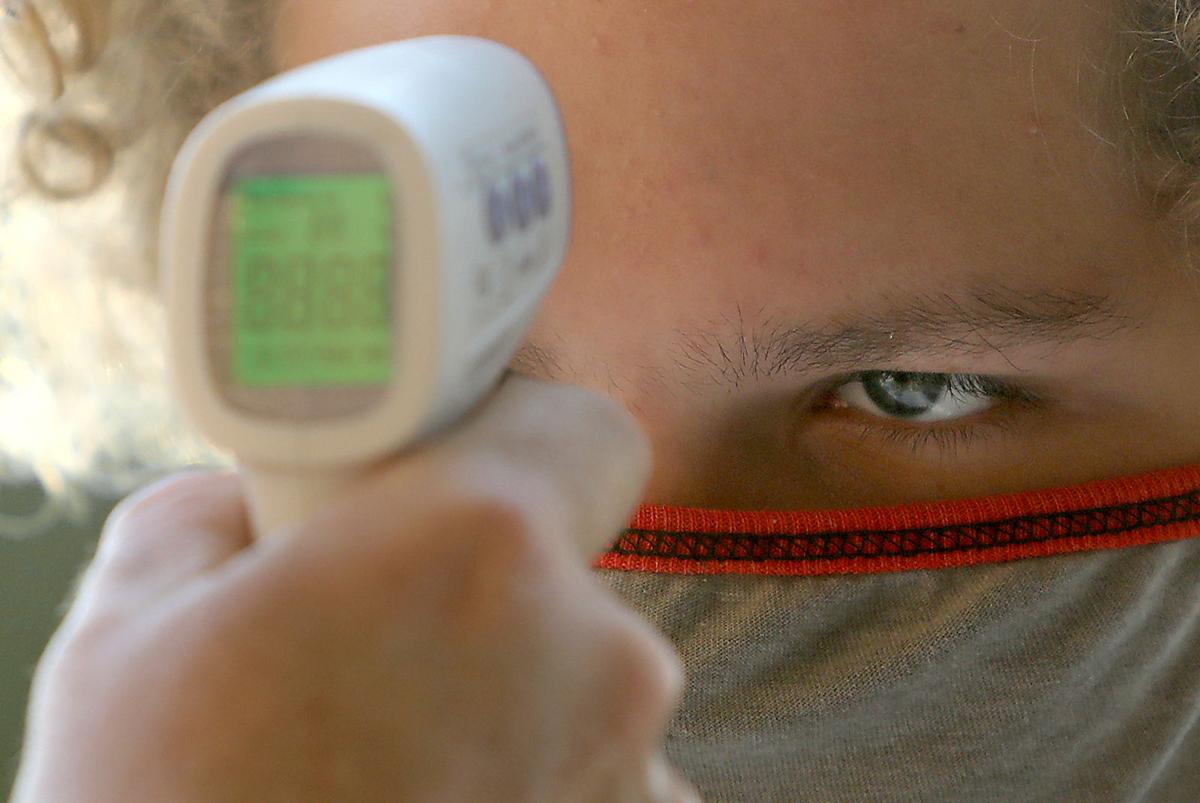 Before players hustle to conditioning stations, questions about exposure and health are asked as they have their temperature checked at Socastee High School last week. Photo by Janet Morgan/janet.morgan@myhorrynews.com

Ben Hampton, Socastee’s new coach, gets prepared to send football players through conditioning exercises in Horry County’s first phase of opening for the season last week. The phase limited groups to 10 at a time, enforced social distancing, a facemask requirement when not exercising and hand sanitizing often. Photo by Janet Morgan/janet.morgan@myhorrynews.com

Before players hustle to conditioning stations, questions about exposure and health are asked as they have their temperature checked at Socastee High School last week. Photo by Janet Morgan/janet.morgan@myhorrynews.com

When offseason football conditioning opened in Horry County last week, it was the embodiment of hope.

Maybe things were going to get better. Maybe the game as coaches knew it had a chance after all.

The cancellation of those practices is doubt in full form.

Late Monday night, Horry County Schools put the voluntary conditioning on hold, effective Thursday. As a result, the men leading those nine programs were again faced with the reality that football may not happen at all this fall — and find ways to discuss that with their players.

“What I’ve told my guys is there are a lot of questions and not a lot of answers,” Myrtle Beach coach Mickey Wilson said. “This is a pandemic. We haven’t faced one since 1918. Our goal is to play football. We don’t know if it’s going to happen in the fall, in the winter or in the spring. Nobody has those answers.”

From Murrells Inlet to Green Sea, it was a similar message across the county Tuesday morning, as teams met knowing their days were numbered. Horry County Schools informed administrators that Thursday would be the last available day for the voluntary drills. It didn’t matter that by all accounts the conditioning was being conducted with the safest possible standards or that there was only one minor incident along the way (Aynor was put on hold for one day Monday while a possible secondary exposure situation was investigated and cleared). Nor was there much solace in knowing that Horry County was one of the last large districts in the state to end voluntary conditioning.

The spread of COVID-19 in Horry County and South Carolina has changed the ultimate goal, one that for the moment doesn’t have much time for football or the rest of the high school sports that were initially scheduled to open their offseason drills next week.

“They realized this was bigger than us, bigger than Socastee, bigger than Horry County,” first-year Socastee coach Ben Hampton said. “We got good work in while we had them. Everyone was really appreciative of that. If football does come back, if we get something in the fall, I think people will not take it for granted. Even if we’re in school in the fall, people are not going to take that for granted. There will be a newfound respect for academia and extracurricular activities once we get them back.”

Hampton, who was hired just prior to the school shutdown in March and had yet to meet with his team in-person until last week, made the call after the district’s announcement on Monday evening that he was going to suspend his sessions immediately. It was a decision that he and his staff made that was felt to be “in the best interest of everybody.”

Within hours, Hampton and the district got more affirmation that putting everything on hold was the right call.

Tuesday afternoon, the state Department of Health and Environmental Control (DHEC) announced a one-day high of 1,741 new COVID-19 cases and 17 more confirmed deaths, while also releasing that more than 1,000 hospital beds statewide were being utilized by people who had tested positive or were suspected of it. In Horry County alone, there were 170 new cases and one more death.

District athletics liaison Roger Dixon previously said he expected the crowds in and around Myrtle Beach during this coming Fourth of July weekend to “blow the lid” off the COVID-19 numbers locally.

“DHEC is telling us right now that if we’re high, if you’re increasing or at a high risk, then I would think we’re not going to have school,” North Myrtle Beach athletics director Joe Quigley told MyHorryNews.com last week. “If we’re really thinking about what’s in the best interest of our kids, [even with] six feet and all that, are sports in the best interest of our children?”

Athletic trainers, coaches, athletics directors, principals and district employees have raved about the precautions that were put in place and then executed. As the news of the impending conditioning postponement made the rounds Monday and Tuesday, it was further evidence of how little the bubble of high school football could change anything. As North Myrtle Beach coach Matt Reel pointed out, this wasn’t just about those one-hour-long sessions.

The numbers associated with the game pale in comparison to those revealed by DHEC on a daily basis.

“The frustrating part is what you can’t control. As football coaches, everything is based on control — what you can do, how you do it, when you do it,” Reel said. “Everything about that hour, we can control it. The second they walk out, whether they know it or not, they’re going to be surrounded by it.

“It’s not hard to see that people are not wearing masks, that people are coming to the beach and aren’t doing what they’re supposed to do. That’s fine for them. But this is the repercussion of that.”