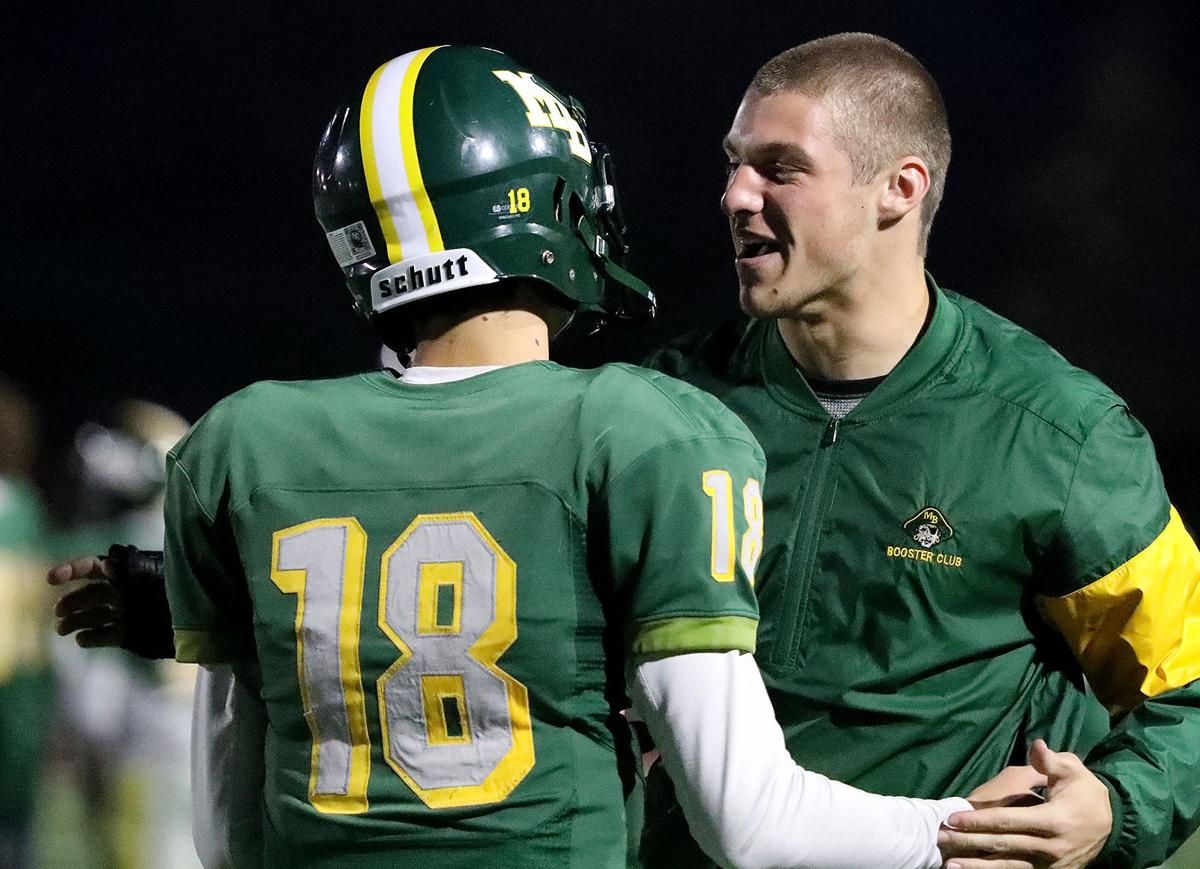 Myrtle Beach's Ryan Burger and Luke Doty celebrate the win over Airport as the Seahawks advance to the fourth round of the playoffs. Photo by Janet Morgan/janet.morgan@myhorrynews.com 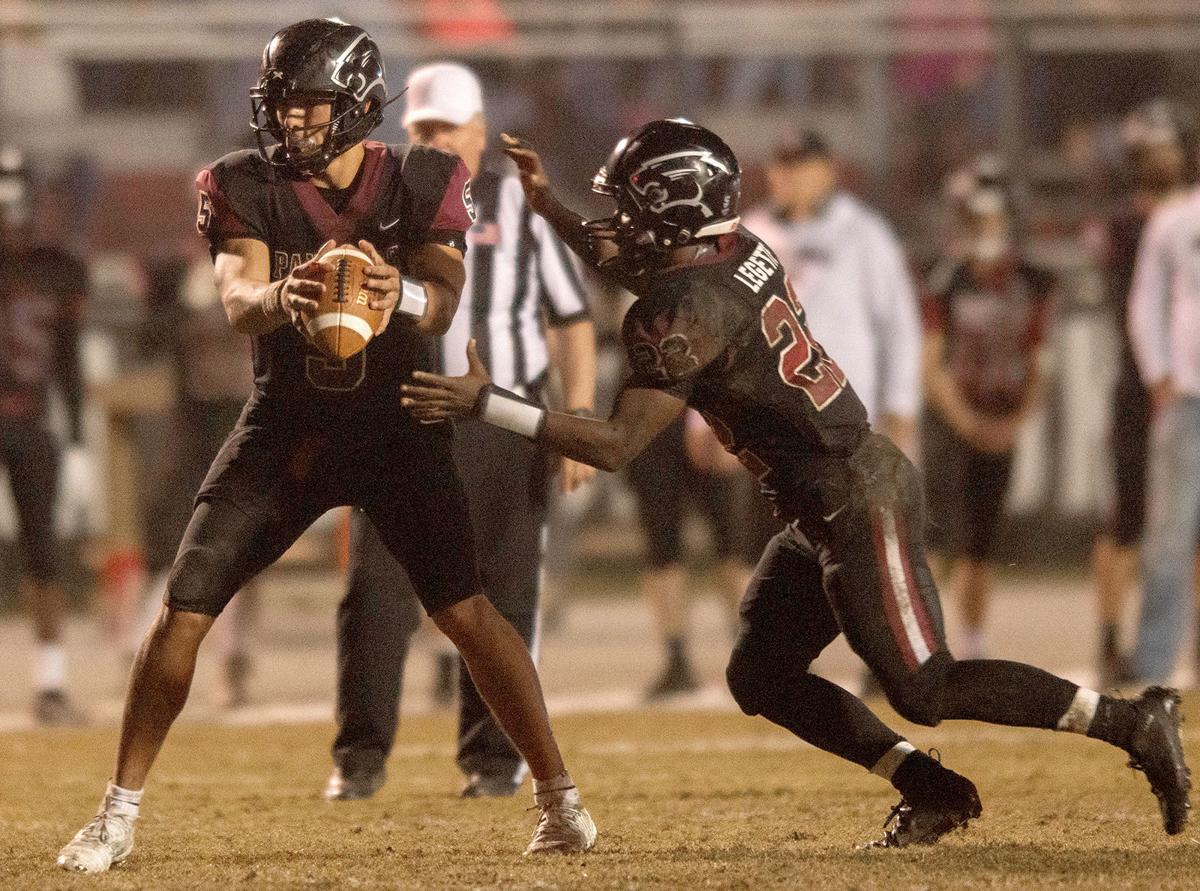 Mason Garcia make a handoff to David Legette as the Panthers defeat Goose Creek 41-14 and advance in the playoffs. Photo by Keith Alan Jacobs / info@myhorrynews.com

Myrtle Beach's Ryan Burger and Luke Doty celebrate the win over Airport as the Seahawks advance to the fourth round of the playoffs. Photo by Janet Morgan/janet.morgan@myhorrynews.com

Mason Garcia make a handoff to David Legette as the Panthers defeat Goose Creek 41-14 and advance in the playoffs. Photo by Keith Alan Jacobs / info@myhorrynews.com

Myrtle Beach is leaving open all available possibilities to get star quarterback Luke Doty back on the field for Saturday’s Class 4A state championship game, even if that means the standout senior playing another position.

The Shrine Bowl of the Carolinas doesn’t have that luxury.

Thanks to the bang-bang timeline of the state’s championship weekend and then its two largest all-star events, Shrine Bowl coach Dean Boyd said Tuesday he already has a contingency plan to replace Doty. If the Seahawks’ senior can’t play quarterback or shows no signs of being able to do so in the coming days, Carolina Forest senior Mason Garcia will be promoted from up to the Shrine Bowl from his spot in the Touchstone Energy Cooperatives Bowl.

The reasoning for it all falls back to the rosters for the two games, a chain reaction that could ultimately affect the all-star participation of three Horry County quarterbacks. And all of it starts with Doty.

Myrtle Beach coach Mickey Wilson has said repeatedly he’s holding out hope that Doty will be cleared from a hand injury that he suffered during the playoff opener. The University of South Carolina commitment hasn’t played or practiced since.

On Tuesday, Doty’s father, Bobby, also said his son’s status is still up in the air.

“That determination will be made this week for sure,” Doty’s father Bobby said Tuesday. “[He] still has some followups going into Saturday. He’s hoping to dress out and be available in anyway way he can. We’ll see.”

In recent weeks, Luke Doty has been counseling sophomore Ryan Burger, who has made significant strides throughout the playoffs and had been a crucial piece of the puzzle to making the state finals against Wren. The game will begin at 6:30 p.m. Saturday at Williams-Brice Stadium in Columbia.

However, any possibility that Doty will get a chance to contribute again at his future college playing home won’t be known until later in the week. He is being evaluated daily, and after playing receiver as a sophomore, Wilson has said he would have no issue plugging him back in there or at defensive back if he can’t grip the football enough to be productive as a quarterback.

Again, though, Boyd and the Shrine Bowl team won’t be able to wait until the Dec. 21 game in Spartanburg before making their own decision.

Doty’s possible absence would leave the Sandlappers with only Chapman’s Mikele Colasurdo at the position. Protocol is to have at least two quarterbacks on the Shrine Bowl roster. Boyd said back in September when the rosters were released and then again Tuesday that Garcia was the clear choice as an alternate.

The Carolina Forest senior led the Panthers to the lower state finals for the first time in school history, throwing for 2,149 passing yards and 19 touchdowns. He also ran for 761 yards and another 14 scores.

So, if he bumps up, that would leave a hole in the Touchstone Energy Cooperatives Bowl. Players for that game have to report to Myrtle Beach by Sunday. Dutch Fork’s Ty Olenchuck — whose team knocked Carolina Forest out of the playoffs last week — was the other primary quarterback picked for the South roster. North Myrtle Beach’s Ramsey Lewis — who was selected for that game as a running back after playing quarterback for the Chiefs this fall — could shift positions, or the South coaching staff could select another quarterback from the state’s crop of seniors.

But again, all these potential dominoes start with Doty.

The high-profile Myrtle Beach quarterback has thrown for 1,876 yards and 25 touchdowns in less than 10 full games this fall for Myrtle Beach. He’s also rushed for more than 400 yards and four touchdowns and is considered the best dual-threat quarterback in the state and one of the best in the nation by every major recruiting services.

According to Bobby Doty and Wilson, there has been a constant line of communication between the parties here and at USC, and Luke Doty still intends to sign with the Gamecocks later this month and enroll in January.