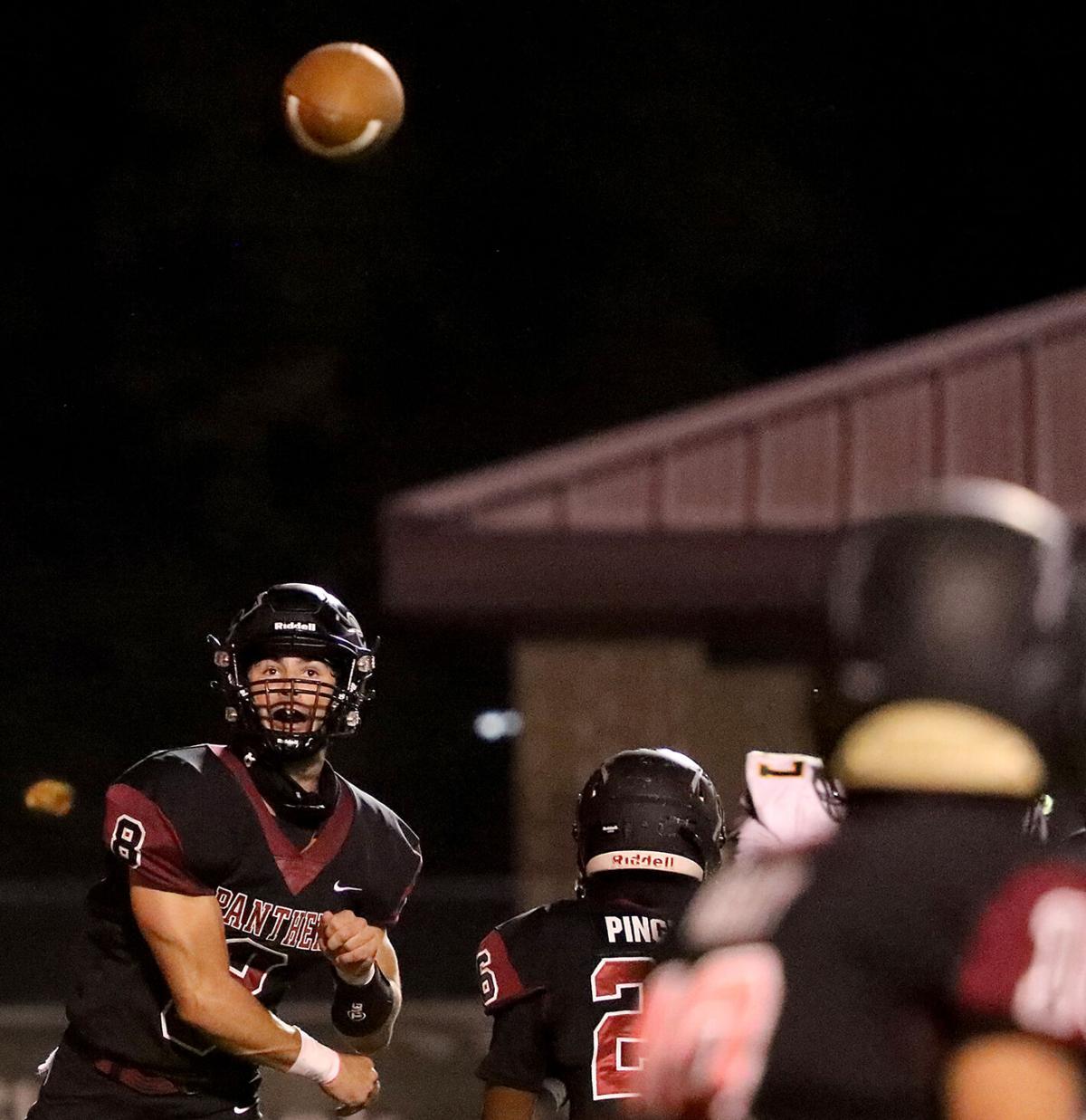 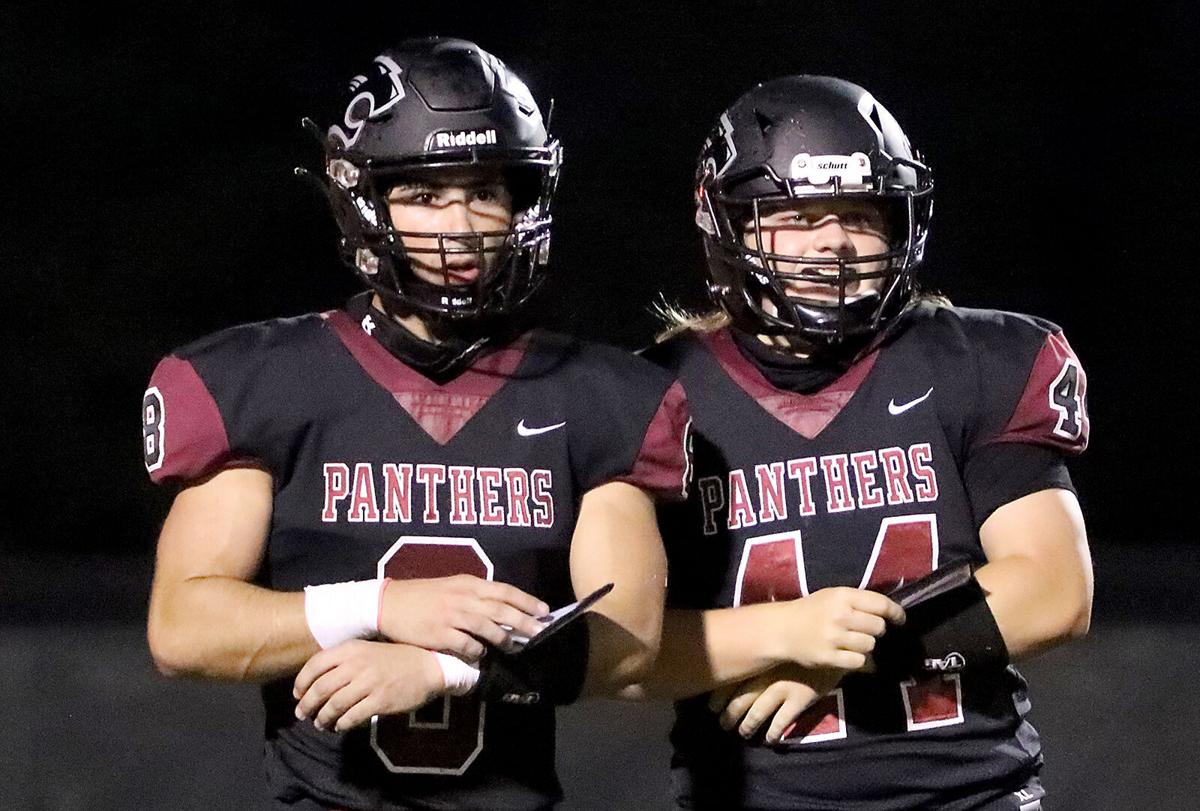 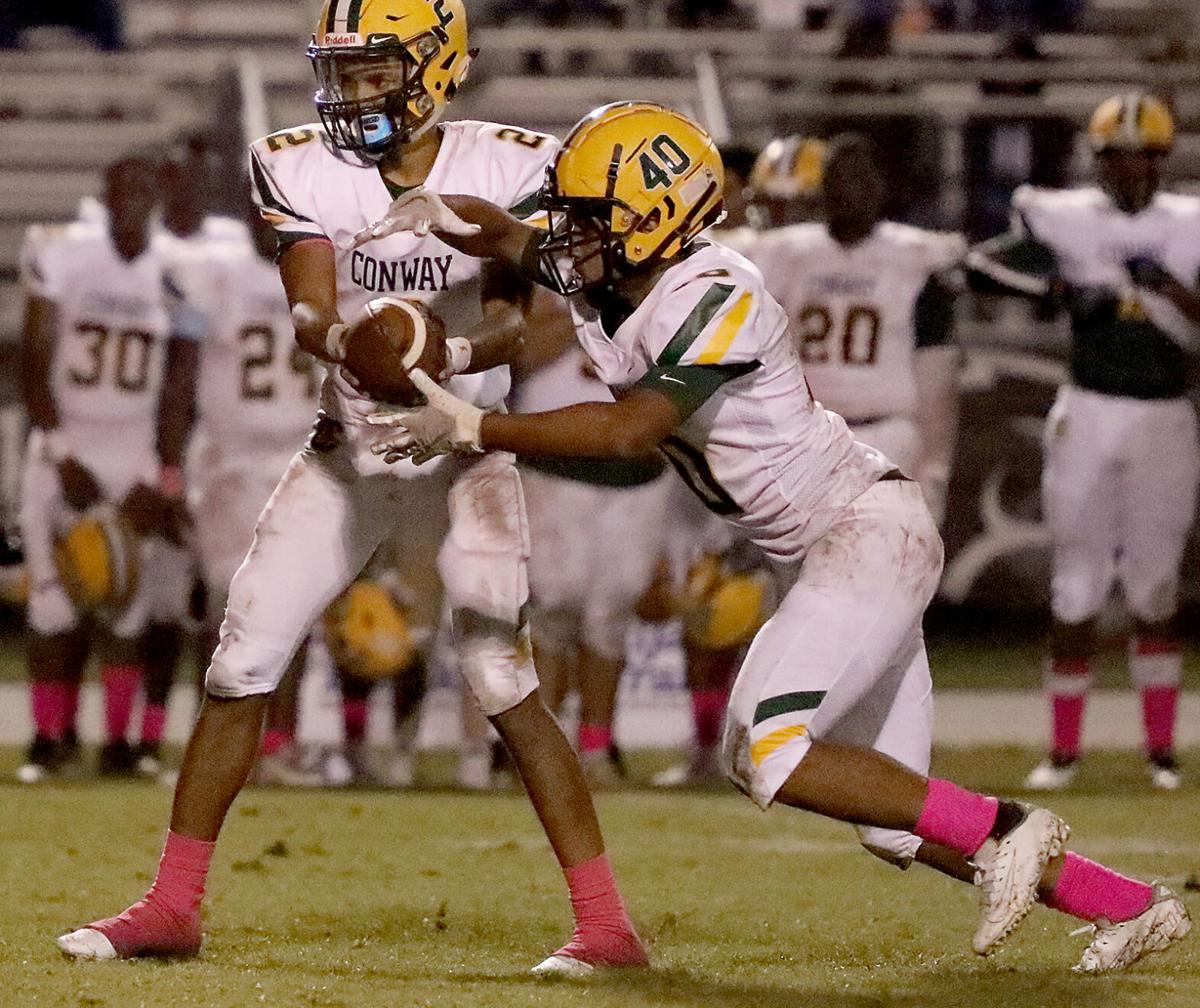 Conway’s Carlton Terry II hands off to Donavan Singleton in the 42-0 loss to Carolina Forest on Friday night. Photo by Janet Morgan/janet.morgan@myhorrynews.com 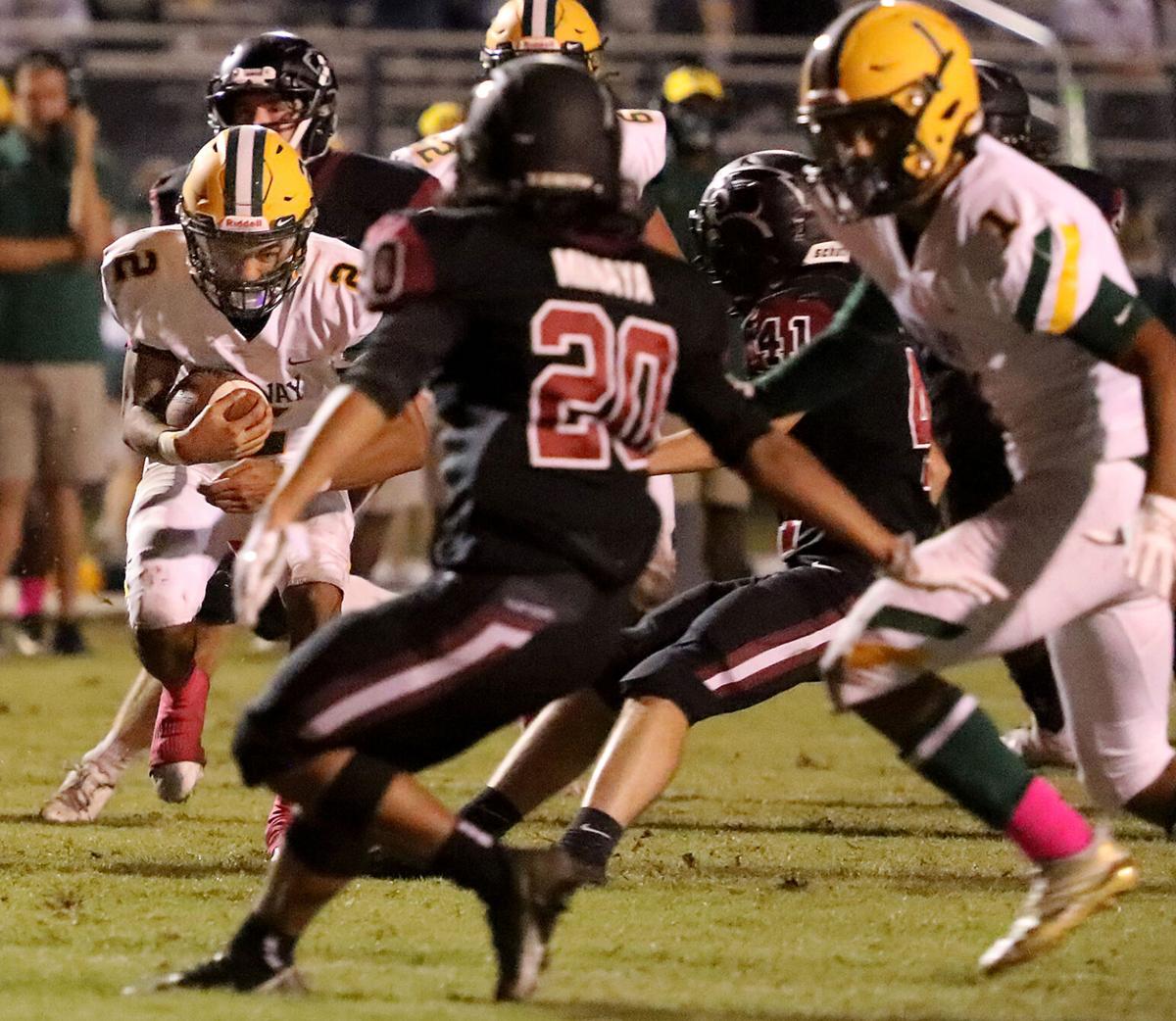 Conway’s Carlton Terry II tries for a first down in the 42-0 loss to Carolina Forest on Friday night. Photo by Janet Morgan/janet.morgan@myhorrynews.com 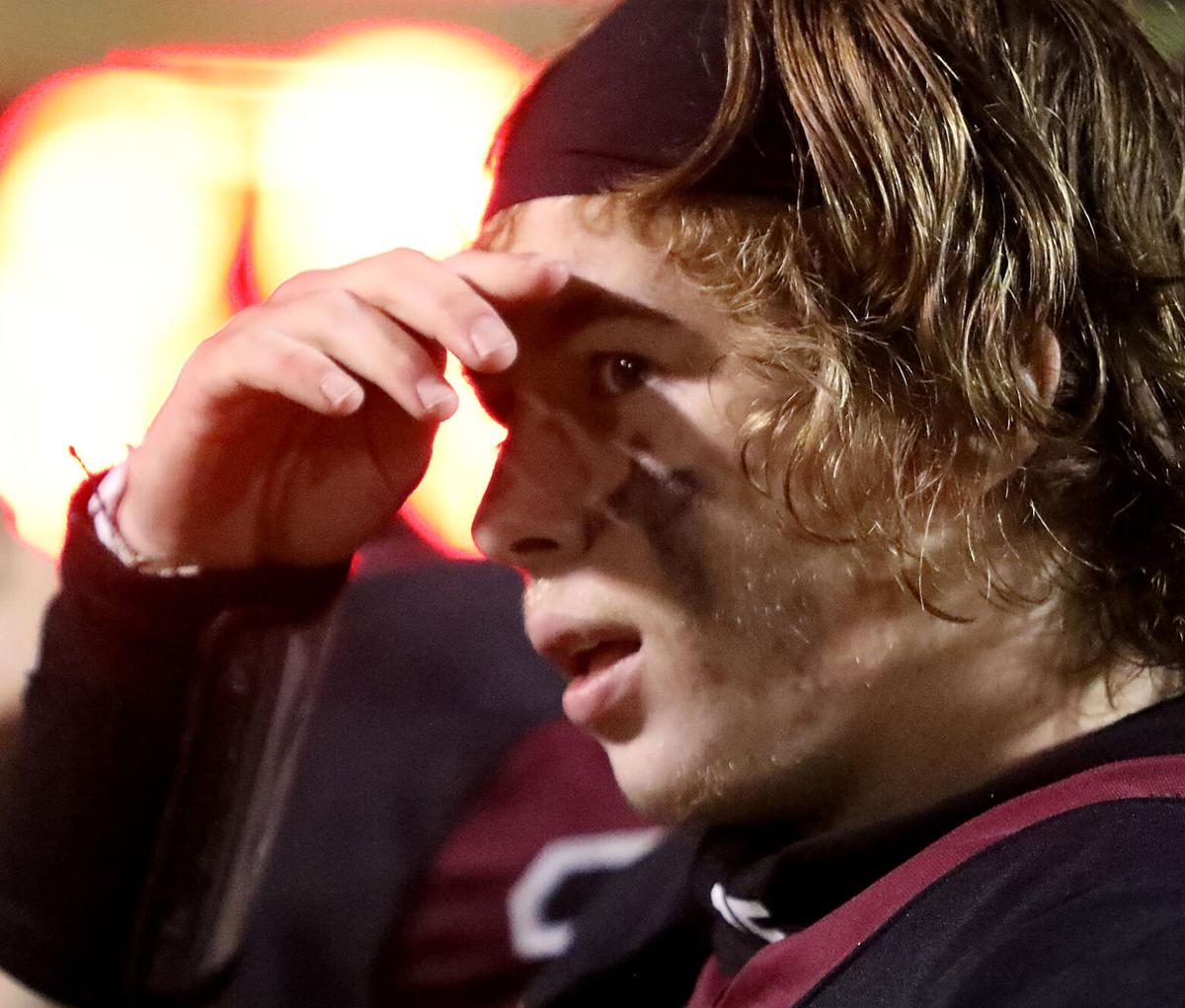 Carolina Forest’s Mikey Blanks checks the scoreboard in the 42-0 win over Conway on Friday night. Photo by Janet Morgan/janet.morgan@myhorrynews.com

Conway’s Carlton Terry II tries for a first down in the 42-0 loss to Carolina Forest on Friday night. Photo by Janet Morgan/janet.morgan@myhorrynews.com

Carolina Forest’s Mikey Blanks checks the scoreboard in the 42-0 win over Conway on Friday night. Photo by Janet Morgan/janet.morgan@myhorrynews.com

Friday night, Carolina Forest’s quarterback showcased his arm and his legs. The senior threw a pair of touchdown passes and ran for two more scores as the Panthers (2-0, 1-0 region) overpowered rival Conway 42-0.

“Being multifaceted on offense is a big thing in this day and age,” Carolina Forest coach Marc Morris said. “You just can’t go out there and just run or just throw. You’ve got to be able to do a little bit of both.”

The Panthers’ attack certainly looked balanced against the Tigers (1-1, 1-1 region). Watkins started the scoring when he torched the Conway defense for a 53-yard touchdown scamper with just under nine minutes to play in the opening quarter. Right before the end of the quarter, he found wideout DJ Admill for a 50-yard touchdown pass.

Midway through the second quarter, a long punt return from Adam Janack set the Panthers up deep in Conway territory. Carolina Forest took advantage of the field position and Watkins scored on a seven-yard run, carrying a couple of Conway tacklers with him. With under a minute before halftime, the Panthers got another big play from Watkins, who found Admill for a 30-yard touchdown pass.

It was the third time Watkins and Admill had connected for a touchdown this season.

“Me and DJ definitely have a great connection on the deep ball,” said Watkins, who finished the game with 101 passing yards and 88 yards on the ground.

Defensively, the Panthers stifled the Tigers throughout the night. Even when Conway quarterback Carlton Terry Jr. put together a drive, the Tigers couldn’t find the end zone.

“The defense is playing at a really good pace, especially for missing most of the summer practices,” senior linebacker Latrell Pitts said. “The defense is doing great overall.”

Next week, Conway will face Socastee, which is coming off a 20-14 win over St. James Friday. Both teams are 1-1 in region play (Conway defeated St. James last week).

Meanwhile, the Panthers will head to Sumter for their first road contest of the season. After leaving the region in 2018, the Gamecocks returned this year and they will easily be the strongest team the Panthers have faced.

“That’s probably the biggest game in the region,” he said.

But Morris noted that with a shortened season, every game is critical. Just the top two teams will make the playoffs, and getting a No. 2 seed means facing one of the dominant 5A programs in the first round.

“It was a playoff atmosphere tonight,” Morris said of his team's win over Conway. “This was a huge football game tonight, and our kids knew that. We kept preaching that all week. This is playoff football. This is what it’s all about.”