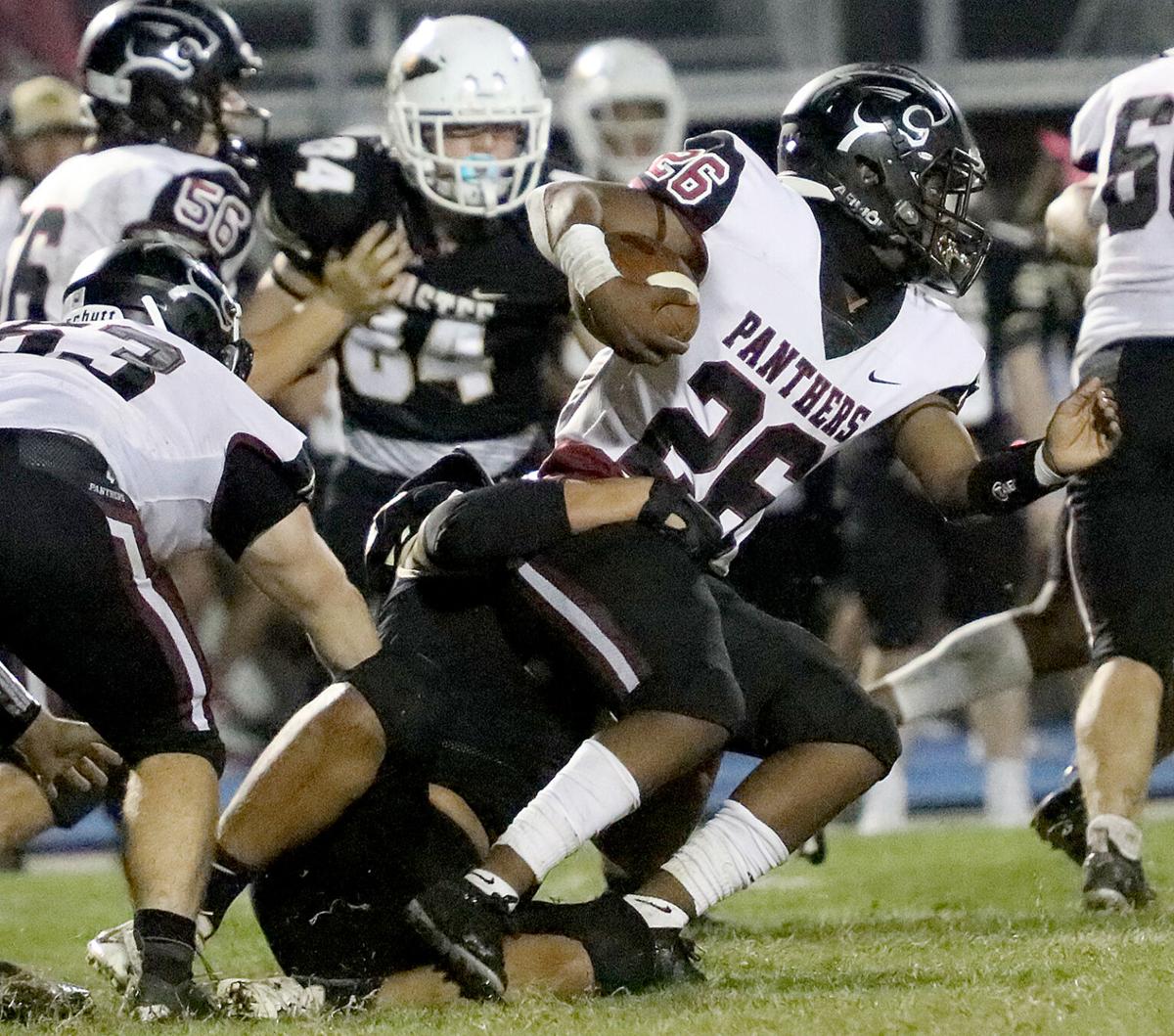 Carolina Forest’s Savion Pinckney rushes through the line in the game at Socastee on Friday. Carolina Forest won 41-6. Photo by Janet Morgan/janet.morgan@myhorrynews.com 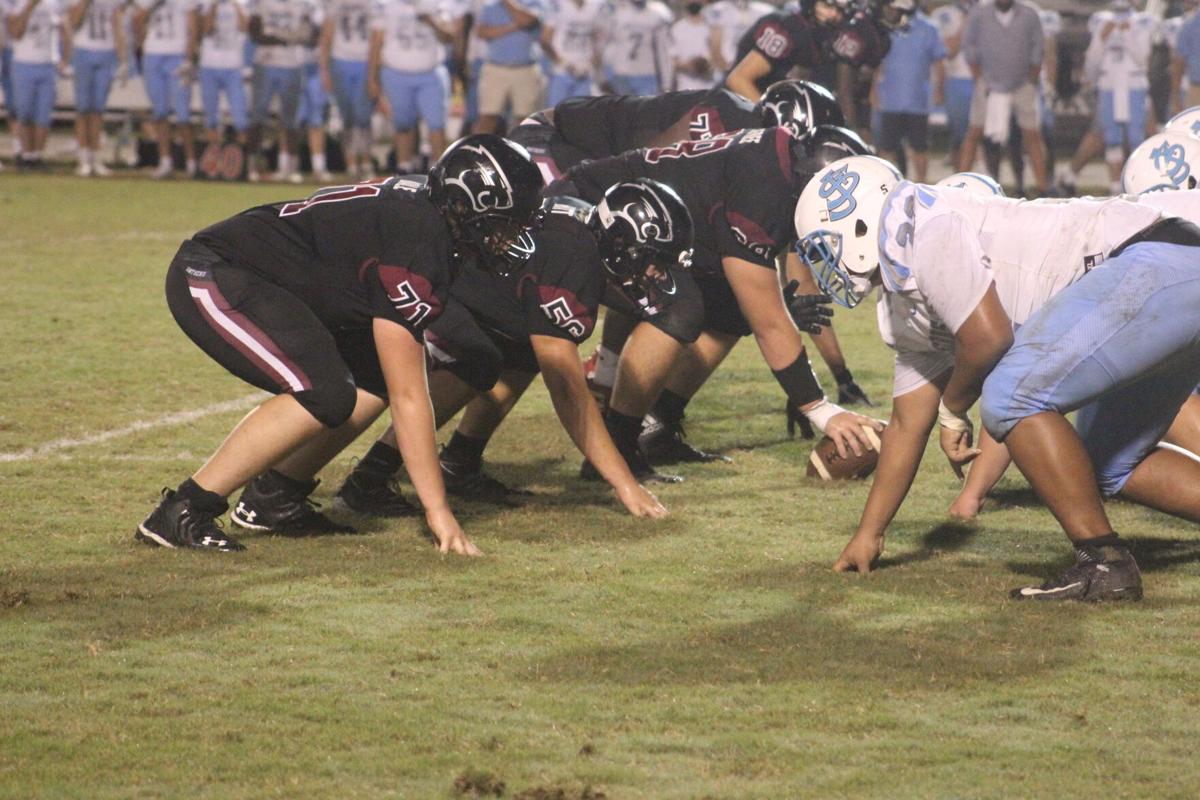 Carolina Forest’s Savion Pinckney rushes through the line in the game at Socastee on Friday. Carolina Forest won 41-6. Photo by Janet Morgan/janet.morgan@myhorrynews.com

If Carolina Forest hopes to upset Dutch Fork tonight, they will need the HOGS to go wild.

That acronym, which stands for Honor Our Great Strength, is the nickname for the Panthers’ offensive line, a stout group stacked with senior starters.

“We take pride in being the big guys,” said left guard Caleb Godfree, one of four seniors starting on the line. “We’re going to manhandle people up front. We’re going to get down and dirty and just put in the work.”

That isn’t bluster. Mention Carolina Forest’s high-powered offense, and the conversation often turns to quick quarterback Kyle Watkins or powerful running back Luke Janack, each of whom has rushed for more than 1,000 yards this fall. While those guys dominate the highlight reels, coaches know their speedsters need some muscle clearing the way.

“So often they don’t get recognition,” Panthers offensive line coach Ken Shoemaker said. “[The media] always talk about the guy that scored the touchdown, not the fact that the guy ran for 450 yards last week behind that offensive line.”

Along with Godfree, the other HOGS' seniors are Lucas Giovansanti, Logan Estep, Riley Dular, Keith Hester and Grayson Blount. The only starter who isn't a senior is right guard Manning Hitt, who is a sophomore.

Some linemen have started for three years. Most have played together since JV.

“We’ve been through everything together,” Estep, the center, said.

Shoemaker, who was previously the JV head coach, said the HOGS’ athleticism and intelligence were obvious early on.

“We knew it was a special group,” he said. “The main thing was they wanted to be great. They worked so hard. And it’s amazing. I love them. They’re like sons to me. Because I was here with them as freshmen when they came over.”

Over the years, he’s watched them grow stronger — the average bench press of the linemen is now about 305 pounds — and closer. They often eat meals and hang out together.

“They’ve got a little family group,” Shoemaker said. “And I really think that’s why we’re so successful is because they care so much about each other.”

He’s also seen them emerge victorious over and over. There was an undefeated JV run, and the three-year starters have posted a 26-5 varsity record, a mark that could have been even better had the 2018 season not been impacted by Hurricane Florence and this year not seen COVID-19 reduce the number of games.

That success is not lost on the players.

“We talk about that,” Shoemaker said. “Coach [Marc] Morris’s philosophy has always been we build from the JV up. We went undefeated with this group on JV. We always said we’re the team to beat in the state of South Carolina. So those guys have a mindset like that.”

Two years ago, the line changed its blocking scheme under former offensive line coach Norman Quick, a prep football veteran with more than three decades of coaching experience. Quick, who coined the HOGS moniker, focused on his players mastering technique and maintaining intensity. Shoemaker has tried to build on that training.

“A lot of what he did was the foundation of how successful they’ve been this year,” he said. “My job’s been very easy because of him. Coach Quick, he’s one of the best offensive line coaches in North Carolina and South Carolina.”

Looking ahead to tonight’s second-round playoff game, the HOGS understand what awaits them. Last year, Dutch Fork routed the Panthers 45-20 in the lower state title game. The Silver Foxes have taken home the last four 5A state championships and they possess a 46-game winning streak.

“The majority of teams they play, I think, are beat mentally before they even play them. [They are] expecting to lose,” Godfree said. “But our mindset’s not that way. We’ve always had the mindset going in expecting to win.”

That was great the young men deserve that thanks