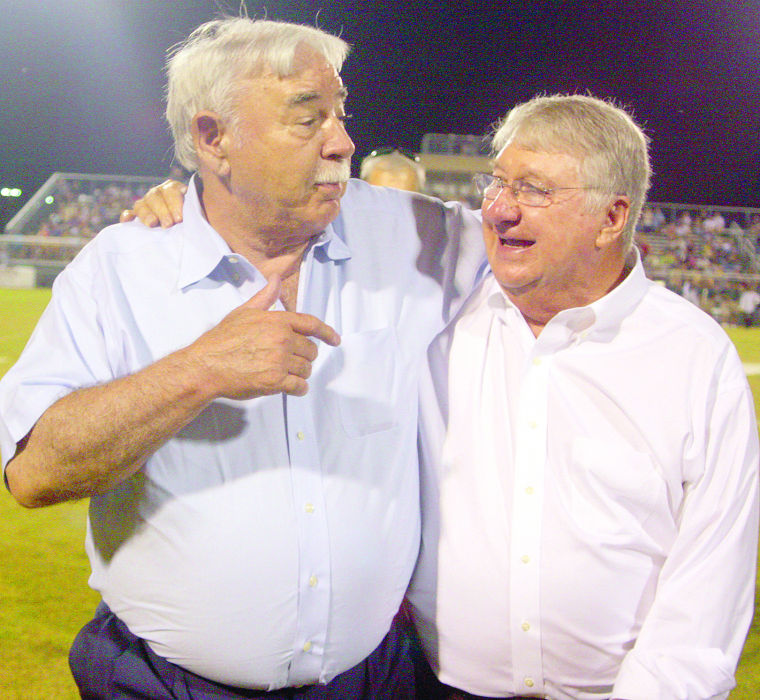 Members of the 1963 Conway High School football team were introduced during halftime festivities at Friday night’s Conway-Socastee football game. The team held a reunion prior to the game.

Members of the 1963 Conway High School football team were introduced during halftime festivities at Friday night’s Conway-Socastee football game. The team held a reunion prior to the game.

The fall of 1963 was the best of times for a group of Conway teenagers who became hometown heroes for their exploits on the football field.

The Tigers went 9-1-1 during that glorious season 50 years ago, including a 26-0 victory over AAA state champion and nationally-ranked A.C. Flora.

Conway posted six shutouts in 11 games including a 20-0 whitewashing of the Winyah Gators. Called Georgetown by most people in Conway, Winyah High School was the Tigers’ most hated rival at the time. The winner of the annual football game between the Tigers and Gators received the Golden Egg Trophy.

The team’s head coach was Buddy Sasser, who served the previous three years as an assistant coach under Bob Clark.

Sasser’s chief assistant was Julius Derrick, who became the Tigers’ head coach when Sasser accepted a college job after eight seasons as the man in charge at his alma mater. Jackie Drawdy coached the offensive backs and wide receivers.

Sasser said Conway High was an independent school in 1963, and because it wasn’t a member of a conference, the team was ineligible to compete in the state playoffs.

Conway was a AAA school, Sasser said, and was assigned to a conference that was made up predominantly of schools from the Charleston area. The problem was fans of the Charleston schools didn’t travel well for games as far away as Conway resulting in poor gate receipts.

On the other hand, games against area schools including Georgetown, Marion, Myrtle Beach and Dillon resulted in packed stands and standing room only crowds.

“I think we had around 5,000 people at the game with Georgetown,” Sasser said. “You couldn’t get a seat. I remember people were standing all around the field on both sidelines.”

Sasser can’t help but wonder how Conway might have fared had the Tigers been allowed to compete in the playoffs.

“I think we would have done very well that year,” he said. “A.C. Flora was one of the highest ranked teams in the state, and we beat them 26-0. We had a very balanced team. We were good on offense and also good on defense.”

The team was loaded with stars including Buddy Gore and Joey Branton, who served as team captains, along with Pete Peterson.

Gore and Branton both played in the Shrine Bowl Game of the Carolinas before heading off to Clemson University.

Gore, who later became one of the best running backs in Clemson history as well as ACC Player of the Year as a junior, was one of several good runners on the team.

According to Sasser, Johnny Bacot was a talented quarterback, and Sammy Lovell and Bobby Thompson were also very good running backs.

“We had three good running backs and a good quarterback,” Sasser said. “Johnny was a very good passer.”

The team featured a pair of twins in Joey and Mackey Singleton and Terry and Tommy Hunter. In addition to Gore and Branton several other players went on to college including Peterson at Newberry; Sammy Lovell at Furman; and Jerry Mishoe at West Point.

Conway played its home games at a field on Laurel Street beside the high school, and Sasser gives the 1963 Tigers a lot of credit for helping pique interest in building a new football stadium.

“In the fall of 1963 we weren’t sure we were going to get a new stadium,” he said. “The success of that team helped us create a lot of interest in getting a new stadium.”

The old stadium served as Conway’s home field until the school built a new on-campus stadium, which opened for the 2000 season.

The old stadium was torn down when the university added football and built Brooks Stadium on the site.

“The stadium used to go toward the graveyard and now it goes parallel,” Sasser said.

Friday night was a memorable one for Sasser and members of the 1963 Tigers, who enjoyed a 50-year reunion prior to the Conway-Socastee football game.

Not surprisingly, the win over A.C. Flora was the game most of the players remembered the most. Peterson recollected that Flora’s uppity attitude helped fire the Tigers up for the game.

“They came to Conway and complained about the sandspurs and our raggedy field,” Peterson said. “They wouldn’t even use our dressing room. They dressed at the motel. We were ready. We’d have torn the back wall off the gym to get to the field if we had to.”

Peterson also remembers the game the Tigers lost against North Charleston and the tie with Marion. He said the officials cost Conway victories in both.

“They gave it to ‘em both games,” he said. “We won both of those games. We had a good group of guys who played all sports.”

Derrick remembers that Flora was coached by Jim Pinkerton, who became executive director at the S.C. High School League after he retired from coaching.

“We had some good boys on that team,” Derrick said. “It was a good group.”

Conway moved up to Class 4A when Derrick became the head coach and played for the Lower State championship two years in a row, he said, losing to eventual state champions Spring Valley and Orangeburg-Wilkinson.

Bruce Dorman traveled from Lexington for Friday’s reunion and was delighted to see his former teammates and coaches.

“Those were good times,” he said. “We had some very good coaches. They taught us a lot and not just about football.”

Dorman was a junior offensive guard and linebacker on the 1963 team and a senior the following year when the Tigers went 10-1.

He remembers trying to tackle Gore during a practice session.

“I remember I was lucky enough at linebacker to grab him by his jersey,” Dorman said. “He slung me around and kept going. He was fast and strong. Buddy Gore was unbelievable. He was one tremendous athlete.”

Bacot, whose son Buck is a junior halfback at Socastee, remembers the entire town was solidly behind the Tigers.

“The whole town revolved around Friday night football,” he said. “The town would close down at 4 or 5 o’clock for some of the big games.”

Bacot also remembers that the Tigers “passed a little bit.”

“We just had a good group that came along,” he said. “There was a lot of enthusiasm in town.”