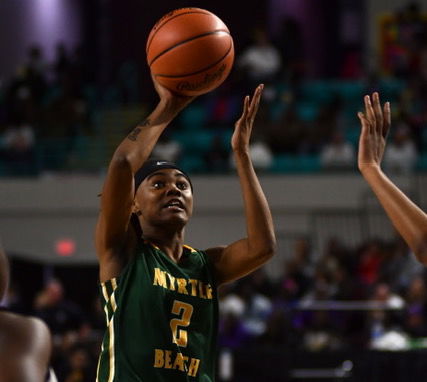 Myrtle Beach's Ajia Kelly lofts a shot toward the basket during the No. 7 Seahawks' Class AAAA Lower State championship game against No. 1 North Augusta. 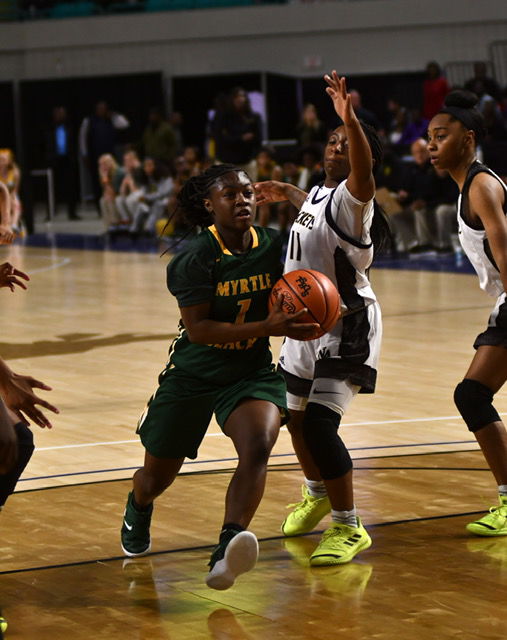 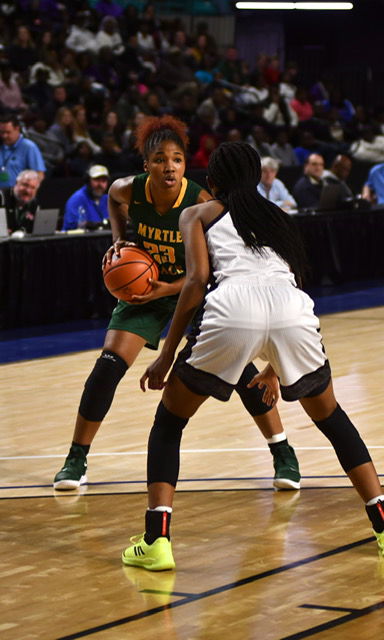 Myrtle Beach's Ajia Kelly lofts a shot toward the basket during the No. 7 Seahawks' Class AAAA Lower State championship game against No. 1 North Augusta.

Myrtle Beach held North Augusta 21 points below its season scoring average and played the Yellow Jackets about as well as any playoff opponent in the last three seasons. The Seahawks also held the Class 4A player of the year to just four points.

None of that was enough.

The Seahawks fell 44-26 to North Augusta in the Class 4A girls lower state championship game on Friday at the Florence Center. They became the latest in a long line of in-state foes to fall to the team that has become every bit of the latest South Carolina dynasty.

“We were one of the better teams, and we could have played a lot better,” senior guard Ajia Kelly said after the loss. “But we didn’t look at the score at the end of the game. It was on us to progress throughout.”

Kelly certainly wasn’t in the mood for a moral victory after the loss. However, it was clear that Myrtle Beach’s season came to an end with at least some modicum of respect, not only basketball followers who pay attention to more than just one area, but also North Augusta coach Al Young.

After all, he knows just how dominant his team can be.

The Yellow Jackets have already won back-to-back Class 4A titles and will play South Pointe next Saturday at the Colonial Life Arena in Colubmia for a chance at a third straight. The team has won 80 games since the start of the 2016-2017 season, lost only to out-of-state opponents and has beaten every playoff foe by 14 points or more.

Most will see the 18-point differential in Friday’s final and assume this was just another lopsided affair for the Yellow Jackets.

“I don’t feel like this was a blowout,” Young said. “I was nervous. They were with us the whole time. They’ve got some kids who can ball out.”

“They are very aggressive and could shut people down, especially in the playoffs. It just seemed like they were peaking. They were playing extremely well and I was concerned about that.”

He had reason to be. Myrtle Beach allowed 15 points to South Aiken in the first round of the playoffs and 12 against Hilton Head in the second. The Seahawks then chewed up a really good offense in A.C. Flora in the lower state semifinals, giving up a highly respectable 28 points to a team that was averaging more than 50 per night.

That same type of defense showed up against North Augusta.

The Yellow Jackets were only able to muster eight first-quarter points and a measly six in the fourth. Although some of the latter could be attributed to trying to run out the clock, it was evident that Myrtle Beach wasn’t going to roll over.

Indeed, it was North Augusta’s second-lowest point total of the year, and star senior Mya Burns, who is signed to continue playing at Georgia Southern, was held to four points, 14 below her season average. Her younger sister, Tyliah, picked up some of the slack by dropping 17.

What cost Myrtle Beach was a lack of offense. Senior forward Asia Smith and guard Fatima Alston each had a team-high eight points for the Seahawks, but the rest of the team scored only 10 points combined.

“We’re young, and we made young mistakes,” Seahawks coach Jennifer Dennison said. “North Augusta executed on our turnovers and that was the difference in the ball game. We have to try to get on North Augusta’s level. They were a lot stronger than us.”

Dennison pointed out that she’ll have an opportunity to do just that with her returning players. The Seahawks will lose three seniors from this year’s team — including Kelly and Smith — but Myrtle Beach only has one returning junior and plenty of experience among the sophomore and freshmen classes.

That knowledge was going to have to suffice to a program that has become accustomed to deep playoff runs and with expectations of doing so again soon.