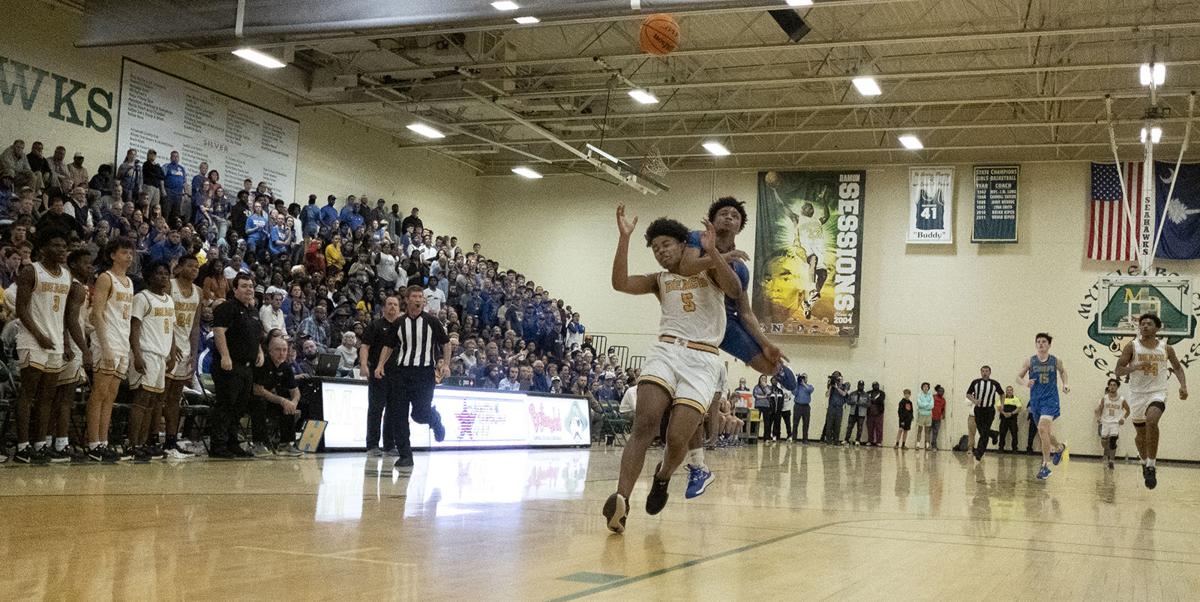 Myrtle Beach's Ayden Hickman is plowed by North Myrtle Beach's Malik Livingston as the Seahawks win 58-47 on Tuesday. Myrtle Beach will face A.C. Flora on Friday in the lower state finals at the Florence Center. Photo by Janet Morgan/janet.morgan@myhorrynews.com 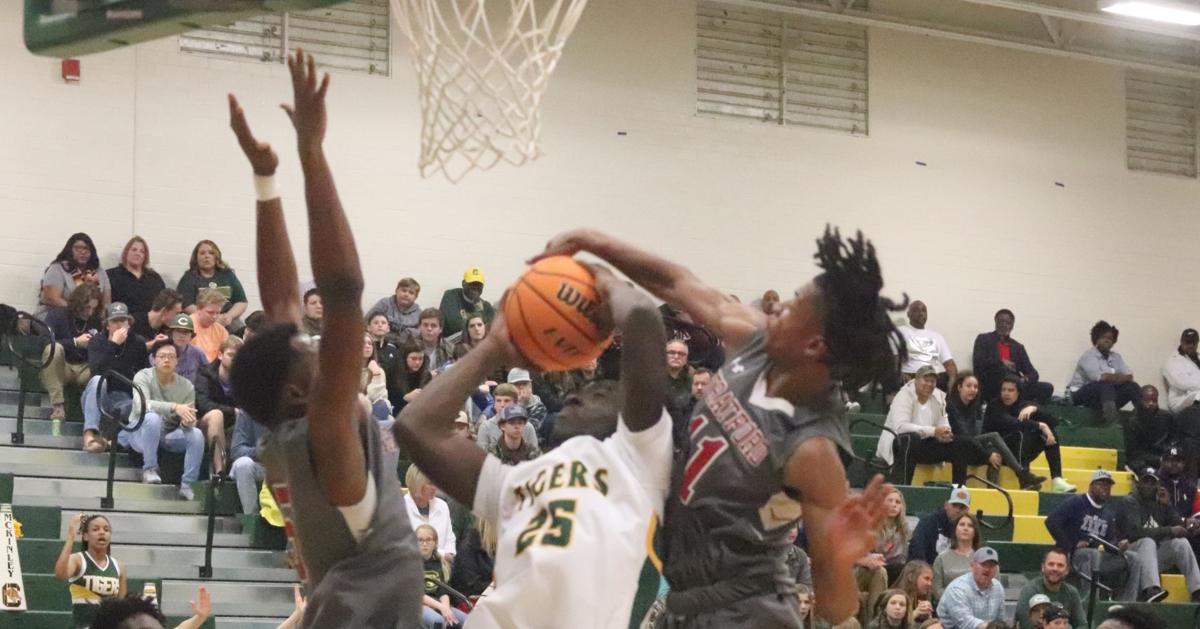 Myrtle Beach's Ayden Hickman is plowed by North Myrtle Beach's Malik Livingston as the Seahawks win 58-47 on Tuesday. Myrtle Beach will face A.C. Flora on Friday in the lower state finals at the Florence Center. Photo by Janet Morgan/janet.morgan@myhorrynews.com

What many folks didn’t understand at the time was that by that point, history had been made not once, but twice.

That’s because closer to the beach, Myrtle Beach was less than an hour away from defeating North Myrtle Beach in a game that guaranteed a second boys team from the district would also be heading to Florence. According to all available research, it’s something that hasn’t happened for Horry County in at least 30 years, if ever.

“It shows the rest of the state we can play some basketball down this way, not just football,” Conway coach Mike Hopkins said.

Proving that to be the case hasn’t always been easy.

If you count since-consolidated Green Sea High School’s Class B runner-up finish in 1961, the county has had just eight boys teams qualify for a state championship game dating back to the start of South Carolina High School League’s earliest records, the 1916-1917 season.

Records for lower state appearances aren’t as well-published, but the individual schools have had little trouble keeping track of just how relatively rare they have been. Aynor has no documented semifinal appearances since winning the Class A state championship in 1946. North Myrtle Beach, which last did so in 2007, was a regular early exit type of team between that year and the early 1990s. Official Loris records show no such appearances since that time, with none definitively in the 1980s or earlier.

On the flip side of that, Conway was previously lumped in with Carolina Forest, St. James — the district’s two newest high schools — as the only schools known to have never advanced that far.

The Tigers scratched their name off the list on Tuesday night.

They’ve reached that point by winning the Region VI-5A title and earning the accompanying No. 1 seed and three straight home games to open the postseason, and then winning them.

It pushed Conway past its own road block, the third round.

Despite making it there each of the last two years, the Tigers lost at Lexington in 2019 after falling at Blythewood the previous season. The reason why Conway was able to do something different this time around started back at the beginning of the season.

It was then that eventual two-time region player of the year Tonka Hemingway was out for several games while participating in the Shrine Bowl of the Carolinas all-star game in Spartanburg, among other absences.

The team still had fellow forward Tim Steele, but so many of its other pieces were so inexperienced that Hopkins had no choice but to tinker with lineups and playing time.

“What I tried to do is not hawk on the fact that he wasn’t there,” Hopkins said. “The game wasn’t going to be postponed or cancelled. It allowed me to be able to find out who was going to be able to play once we got to the region.”

Carlton Terry stepped into the primary point guard spot, and Xavier Kinlaw got back into his old ways after Hopkins wasn’t sure if he was going to play this season.

Freshman Jamarious Woodbury showed enough that he became a regular starter at forward. And Elijah Huffman and Devin Grainger earned some early stripes, too.

However, while the Tigers handled player absences and the exposure process early in the year, the Seahawks have been a constant evolution around the likes of Emorie Knox and James Marques through the season.

Outside of those two constant senior guards, it’s been a smorgasbord of players moving in and out of a rotation that would make even the sub-happiest of coaches cringe.

“It would be nice to have a full team,” Seahawks coach Craig Martin said. “If we had that full team, we’d be a hard match-up.”

Some would argue Myrtle Beach already is. But when it comes to this topic, Martin is understandably a glass-half empty type.

Be it injuries, football commitments, foul trouble or in-team or SCHSL-regulated suspensions, the Seahawks more often than not have been without either Ayden Hickman, J.J. Jones or Darius Hough — or some combination of them — for much of the year.

It started back in November, when Jones and Hough were playing key roles for Mickey Wilson’s football team, one that advanced all the way to the Class 4A state finals. Then, in January, Hough was sidelined for two weeks after suffering a minor injury. Around the time he returned, Hickman was dealing with two small injuries of his own and sat for the final three regular-season games. Hough was then absent for the playoff opener (coach’s decision). After getting hit with two technicals in the second-round win at Colleton County, he was automatically disqualified for the third-round game against North Myrtle Beach.

Jones, who was asked to pick up some of the slack, drew two early fouls against the Chiefs and then a couple more in the second half — each of which played a role in him getting just 18 minutes on the floor.

Still, much like Conway learned how to do back in December, the Seahawks had enough of a supporting cast to help make some history that could get even better this weekend.

Who: Myrtle Beach vs. A.C. Flora

Tickets: $12 per person (fans 5 and under free), available at box office

About: The Falcons entered the playoffs as one of the division’s No. 1 seed after making its way through Region V-4A with a 9-1 mark and an overall record of 25-3. The team won the 2016 Class 3A state title… Myrtle Beach (19-5) will be making its first trek to Florence since it fell to Darlington there back in 2014. The Seahawks finished second in Region VI-4A and entered the postseason as a No. 2 seed. They are one of only 15 schools in the state to own five or more state championships.

Tickets: $12 per person (fans 5 and under free), available at box office

About: Dutch Fork, ranked No. 7 in the state at the conclusion of the regular season, is continuing in the footsteps of its baseball and football programs, which each won state championships in the spring and fall, respectively. Head coach Bret Jones had a standout playing career at Presbyterian College. … Conway is making its first-ever appearance in the lower state finals after qualifying for the third round in each of the last two years. Coach Mike Hopkins, the former Coastal Carolina men’s coach (1994-1998) is in his 15th year leading the Tigers.