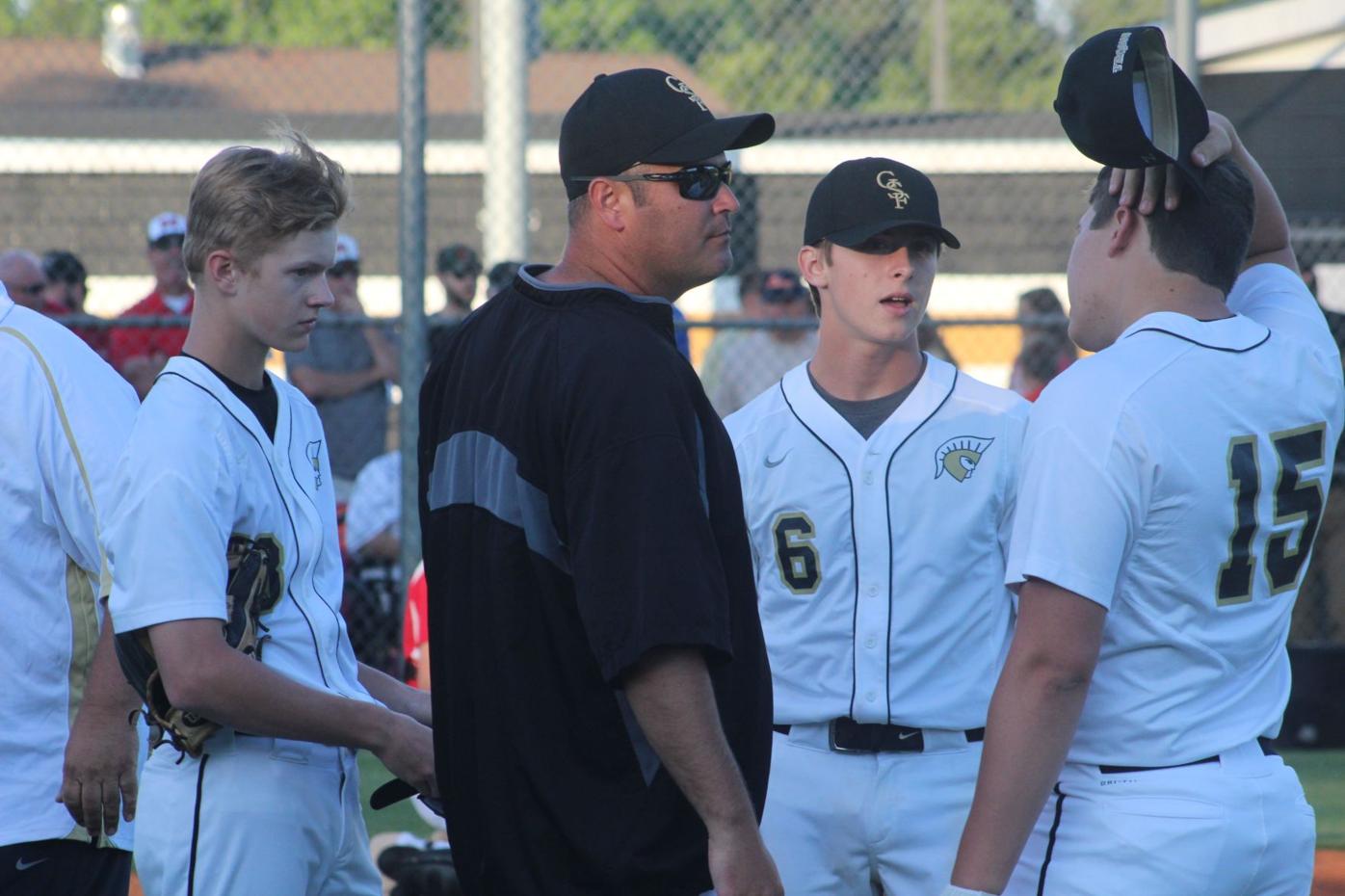 Green Sea Floyds' coach Derek Martin speaks with his players during their 7-3 loss to McBee in the Class 1A state championship series Tuesday. 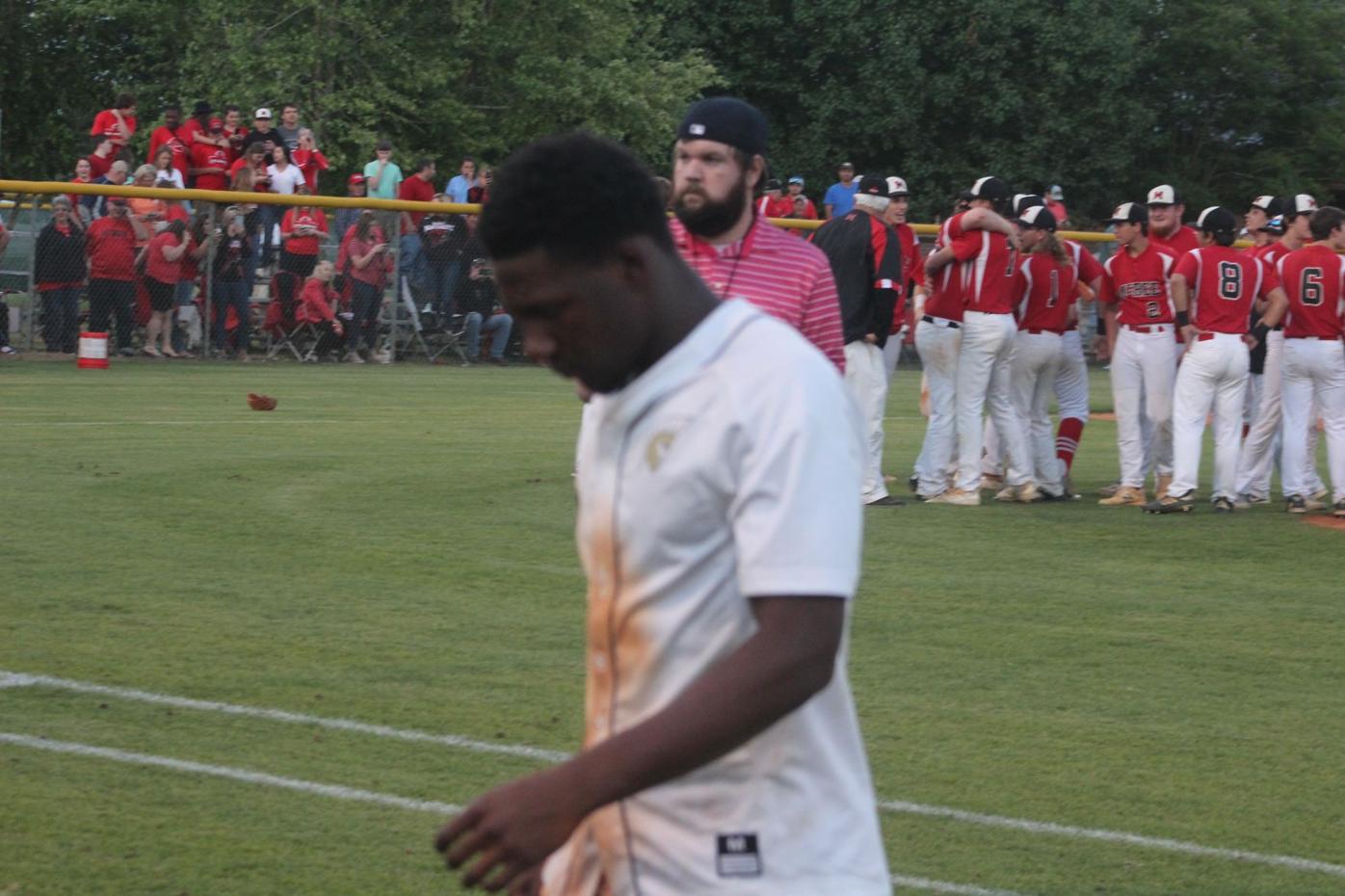 Green Sea Floyds' Jaquan Dixon walks off the field after being thrown out trying to steal second. That was the final out of the Trojans' season. They lost to McBee 7-3 Tuesday. 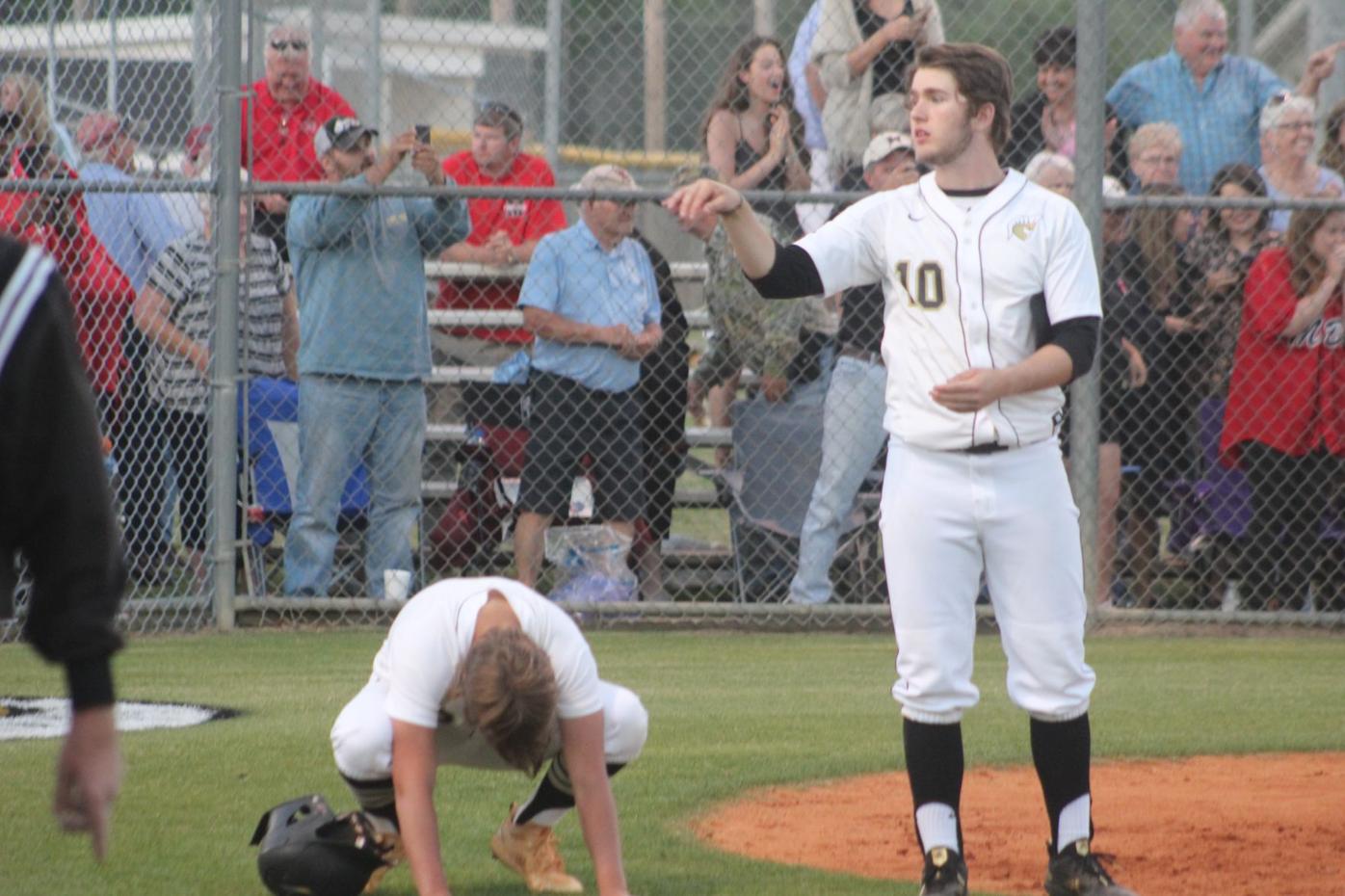 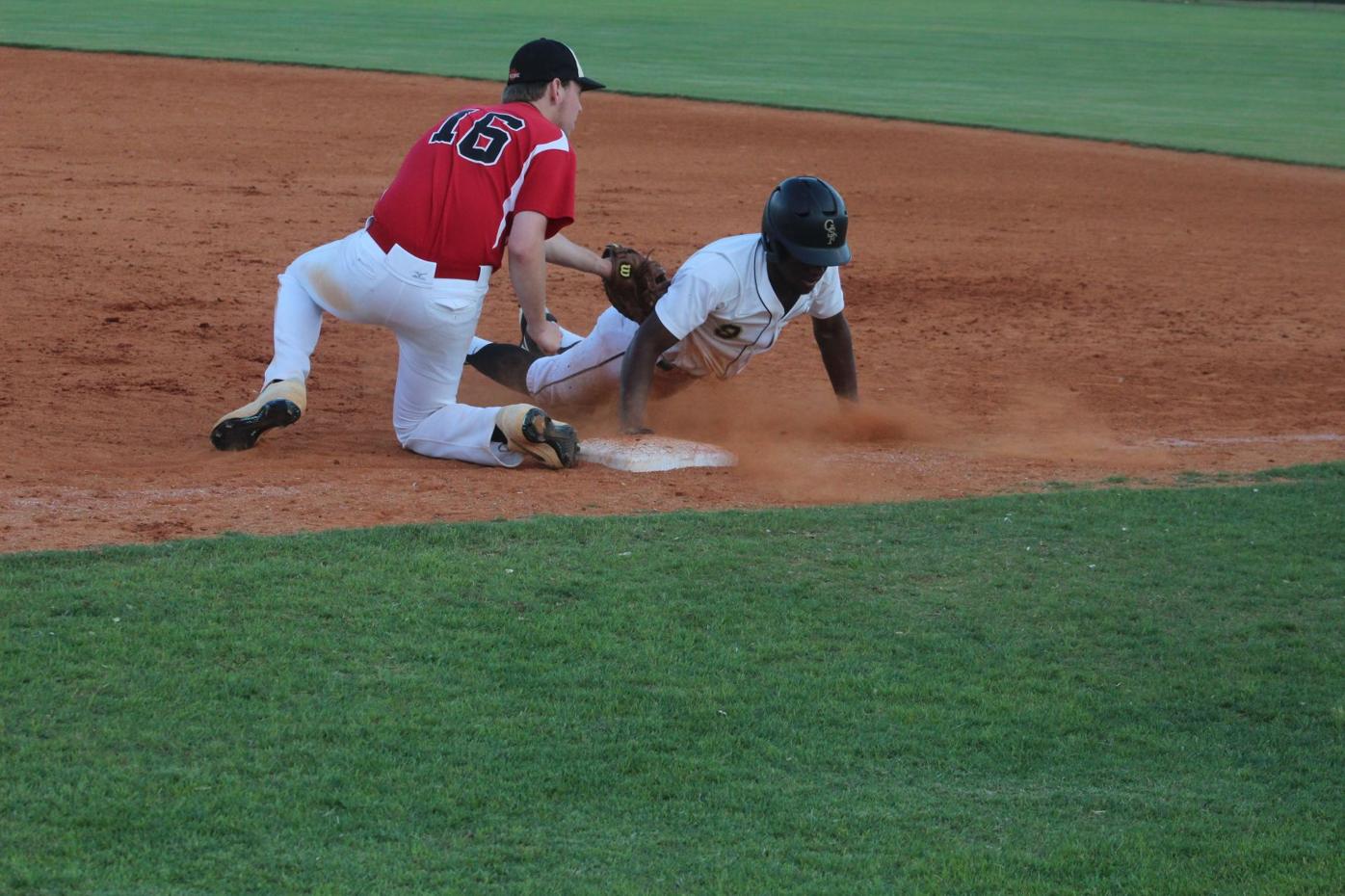 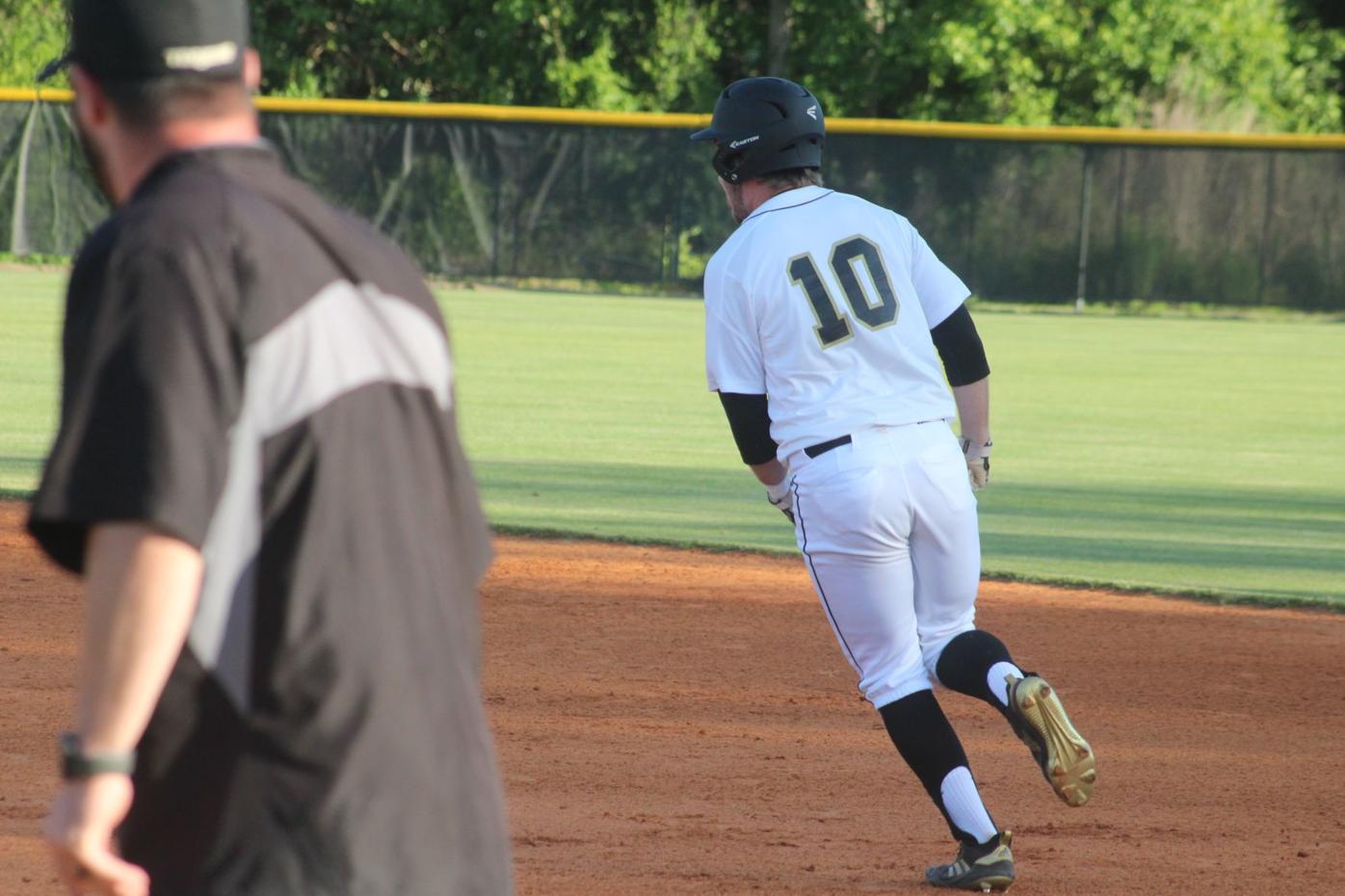 Green Sea Floyds' Lucas McDowell is pumped up after hitting a home run Tuesday in the state championship series against McBee. The Panthers won 7-3.

Green Sea Floyds' coach Derek Martin speaks with his players during their 7-3 loss to McBee in the Class 1A state championship series Tuesday.

Green Sea Floyds' Jaquan Dixon walks off the field after being thrown out trying to steal second. That was the final out of the Trojans' season. They lost to McBee 7-3 Tuesday.

Green Sea Floyds' Lucas McDowell is pumped up after hitting a home run Tuesday in the state championship series against McBee. The Panthers won 7-3.

Jaquan Dixon sat in the dust as the McBee players celebrated their state title on Green Sea Floyds’ field.

The Trojans’ right fielder had made the final out trying to steal second base. He was close, but the throw beat him. It was a somewhat appropriate finale for a season that ended just shy of the team's intended goal.

“That was a heck of a playoff run,” Trojans coach Derek Martin said. “We just ran into an experienced group, a group that’s done it before. I think the fellas understand now what it’s going to take to win one.”

Green Sea Floyds lost 7-3 Tuesday in the second game of the best-of-three series. McBee had won 2-0 on Saturday.

The Trojans (11-8) saved their best baseball for the postseason. They earned 14-0 and 17-1 wins over Palmetto Scholars in the district tournament and routed Charleston Math & Science 20-0 in the lower state round.

Even when the Trojans weren’t overpowering their opponents, they still found ways to win. They defeated Branchville 11-7 and then beat the same team 1-0 last week to clinch the lower state title.

Martin said this campaign was even more impressive considering the challenges of the regular season.

“It was an emotionally draining year,” he said. “Between rainouts and canceled games and injuries, when it came down to crunch time, the boys performed.”

In reaching the Class 1A title series, the Trojans faced a giant in McBee, the reigning state champions who also won the title in 2016.

On Tuesday, the Panthers claimed their third crown in four years using a combination of patient hitting and stellar pitching.

After McBee jumped out to a 4-0 lead, the Trojans cut the deficit in half with a two-run homer from left fielder Lucas McDowell in the second inning.

But that work was quickly erased in the third inning when the Panthers loaded the bases and watched Green Sea Floyds walk in two runs. McBee tacked on another run in the sixth, and the Trojans faced a five-run deficit heading into their final at-bat.

They started strong with a Dalton Stroud double to begin the inning. He advanced to third and scored when a McBee infielder misplayed Dixon's grounder.

But the Trojans’ title dream died when Dixon attempted to swipe second.

Despite the loss, Green Sea Floyds will be more than prepared for next spring when they return seven starters. They will lose standout pitcher and shortstop Storm Harrelson to graduation, but the team will bring back many of the contributors from this season’s run.

One of those is McDowell, who will be a senior. He pointed out that many of the key contributors to the baseball team’s playoff push won a state title in football last fall. He’s excited about another year with this group.

“We’ve been together our whole lives,” he said. “All of us. And we’ve always had each other’s backs, no matter what. We’ve got a different bond than everybody else. That’s what it takes.”