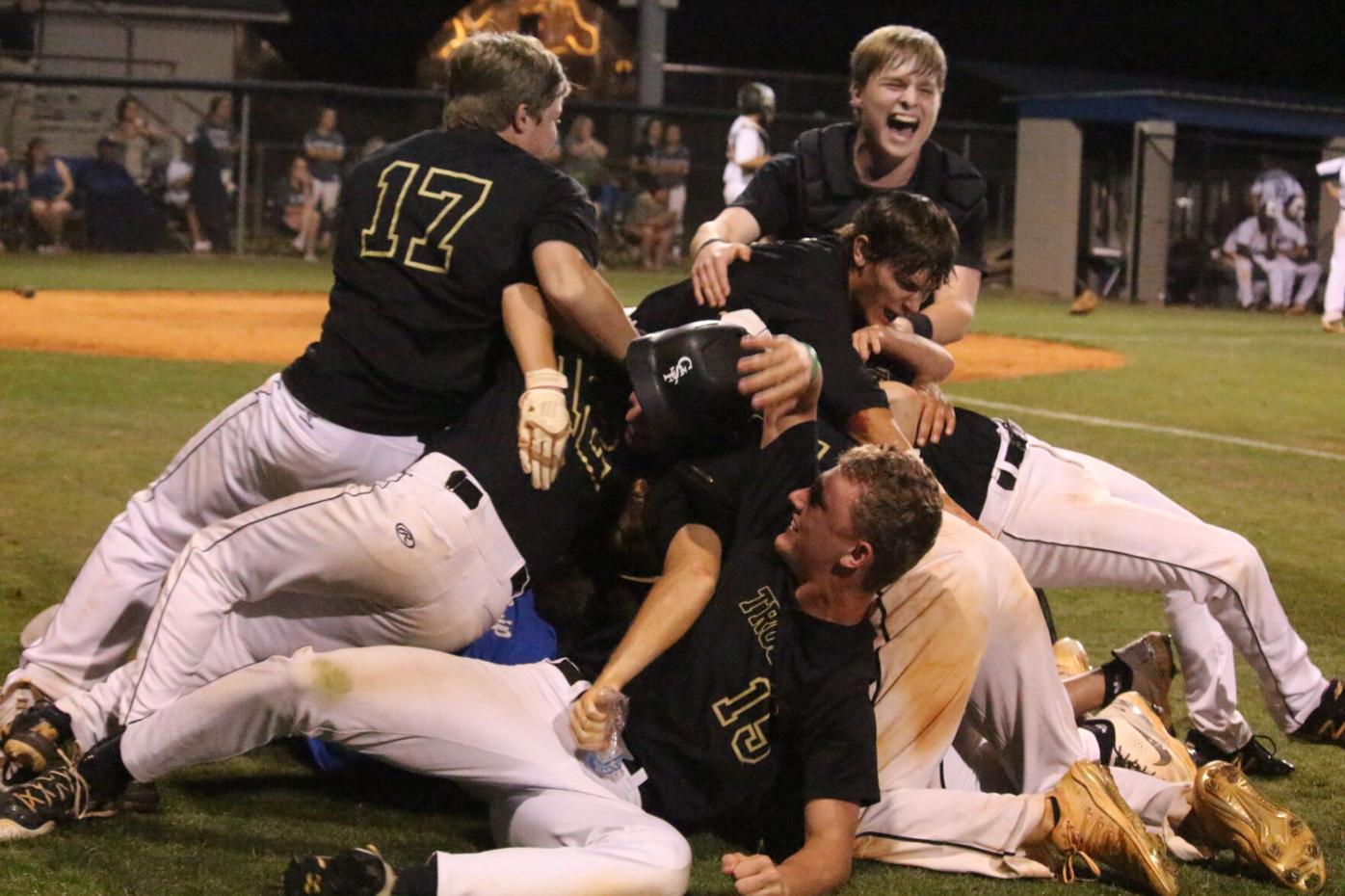 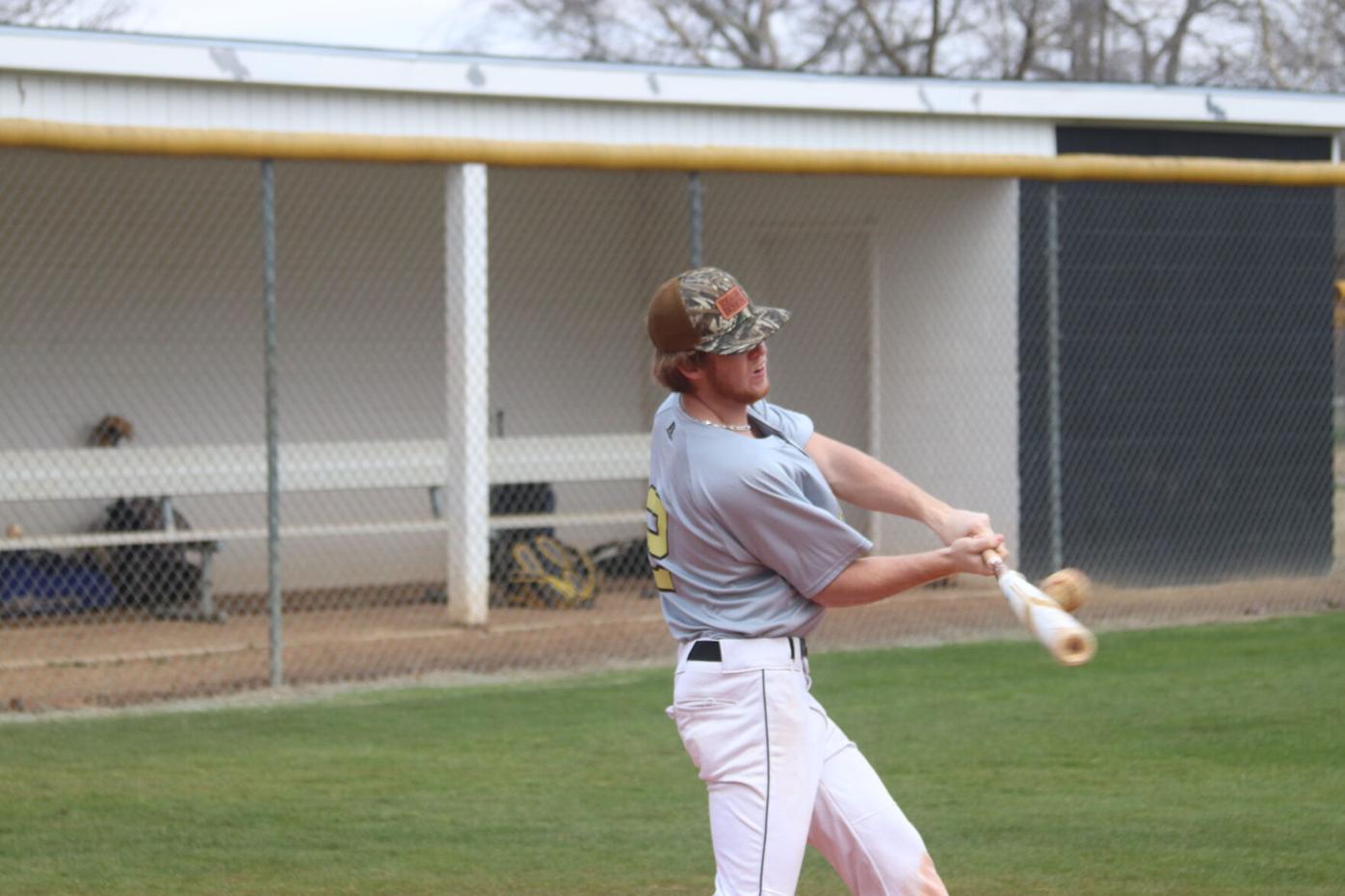 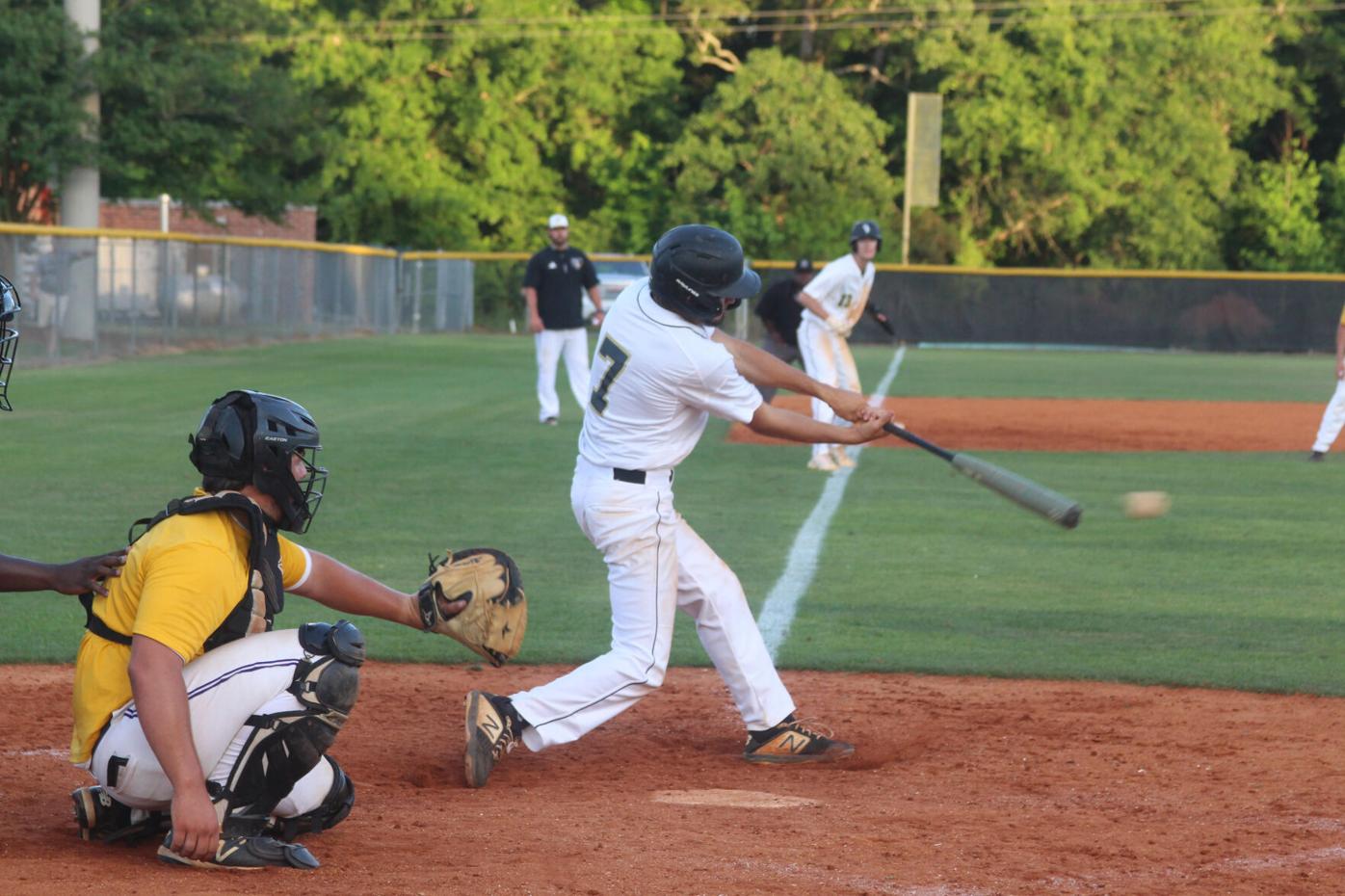 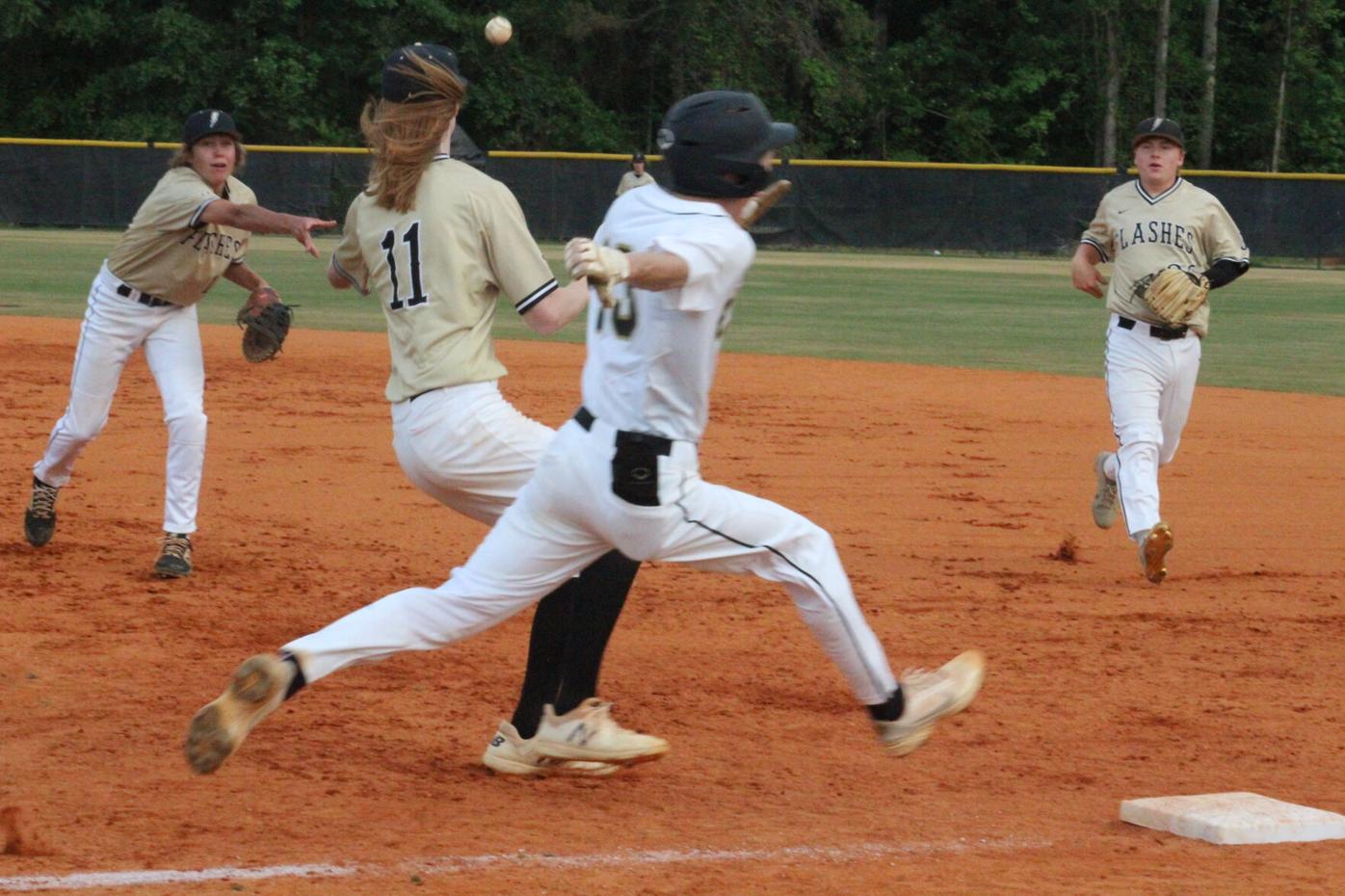 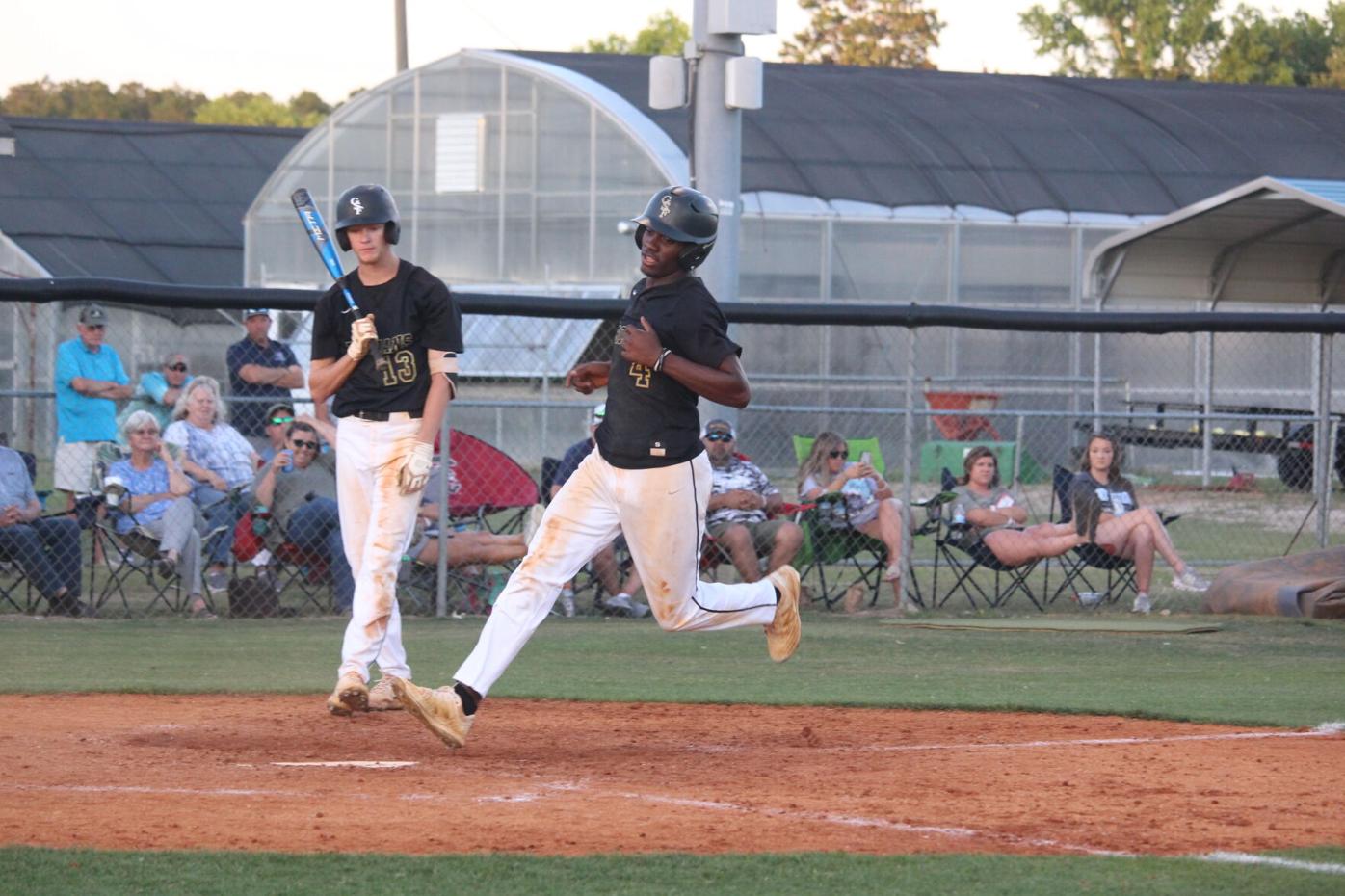 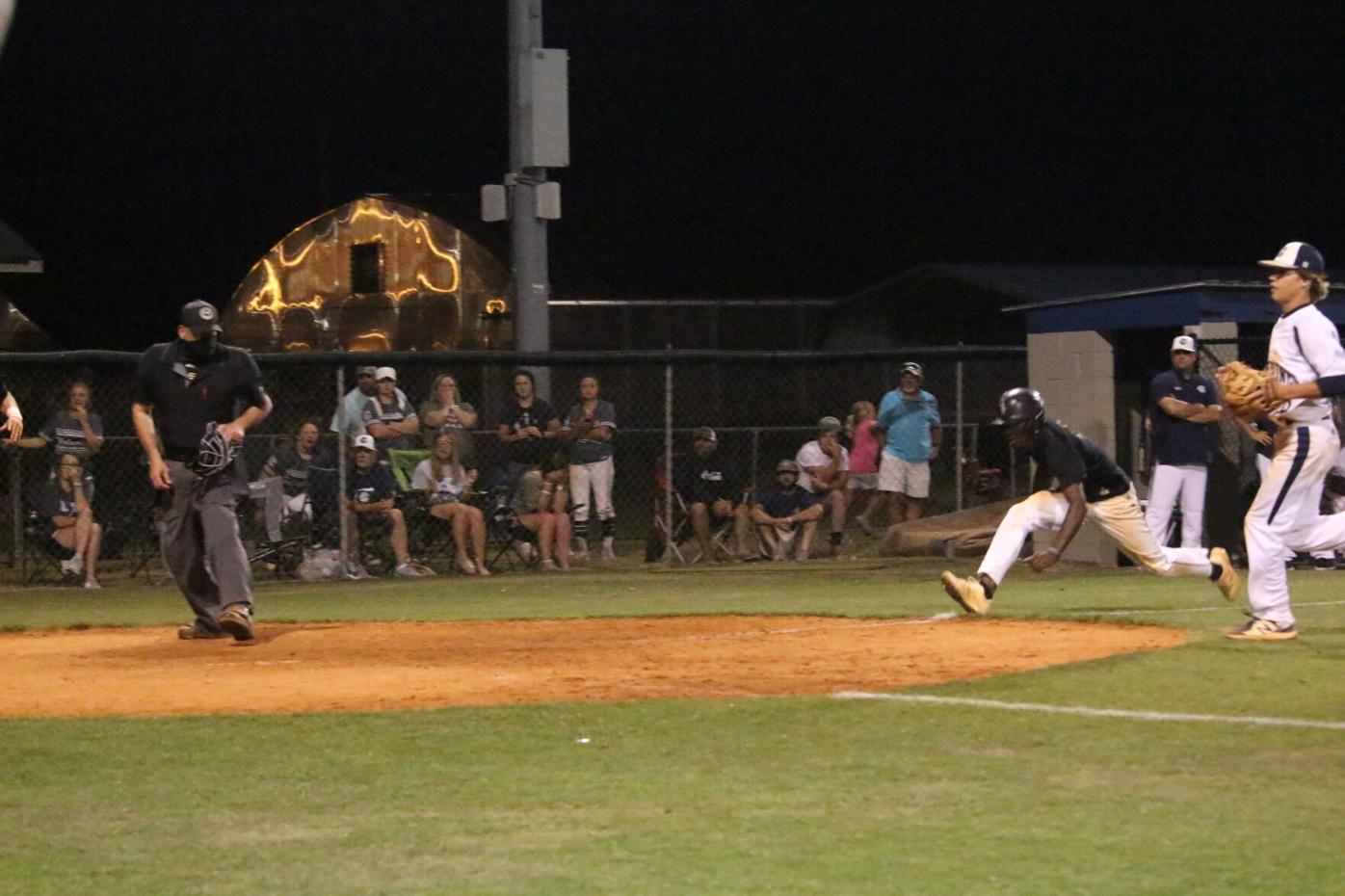 Aaron Graham steals home after a wild pitch by East Clarendon. Graham's run would send the Trojans to the Class A Lower State title game. Photo by Ian Livingston Brooking. 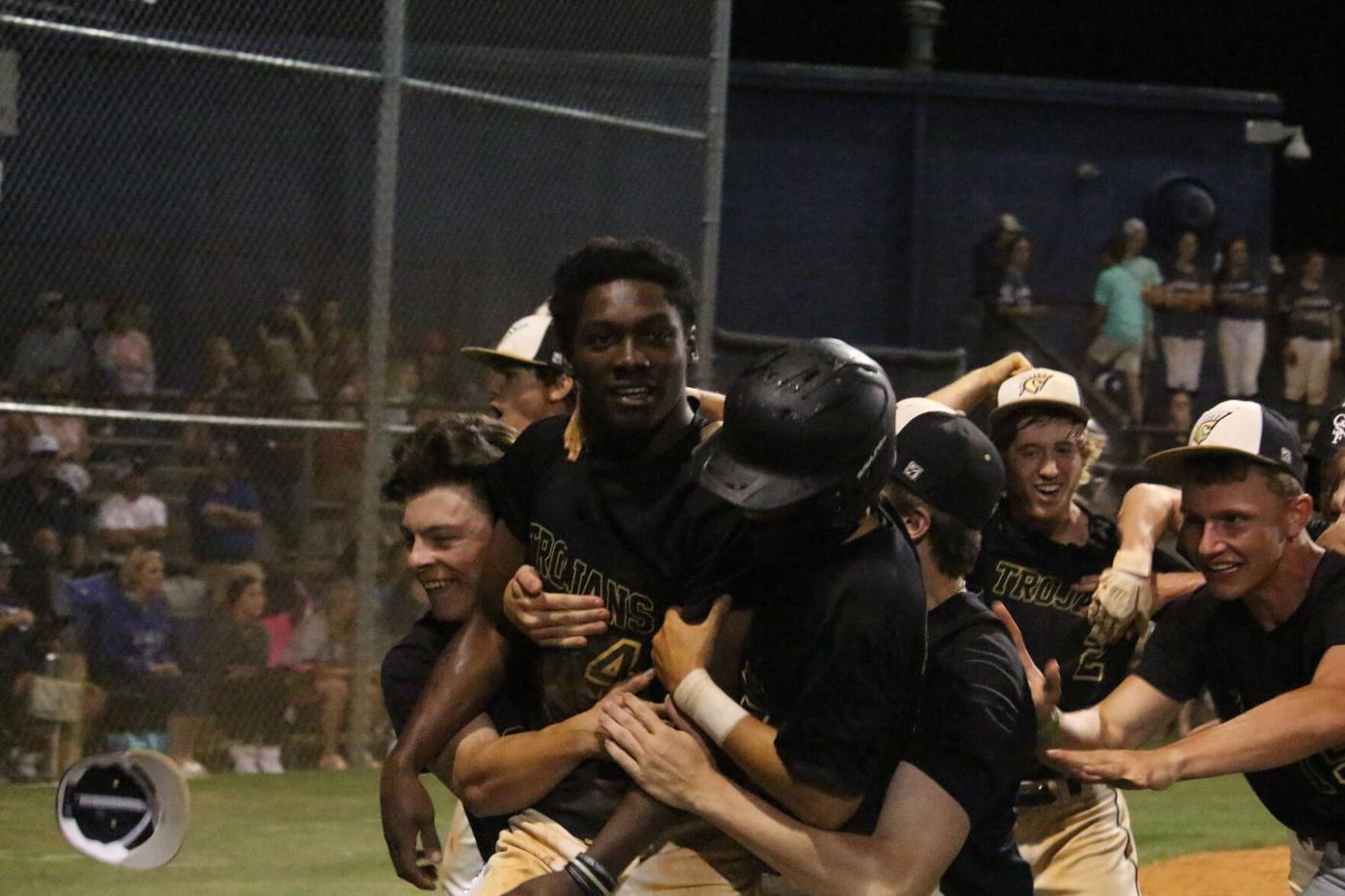 Aaron Graham gets mobbed by teammates following his wild pitch walk-off that sent Green Sea Floyds to the Class A Lower State championship series. The Trojans will face the Lake View Wild Gators in game one Monday at Green Sea Floyds. Photo by Ian Livingston Brooking. 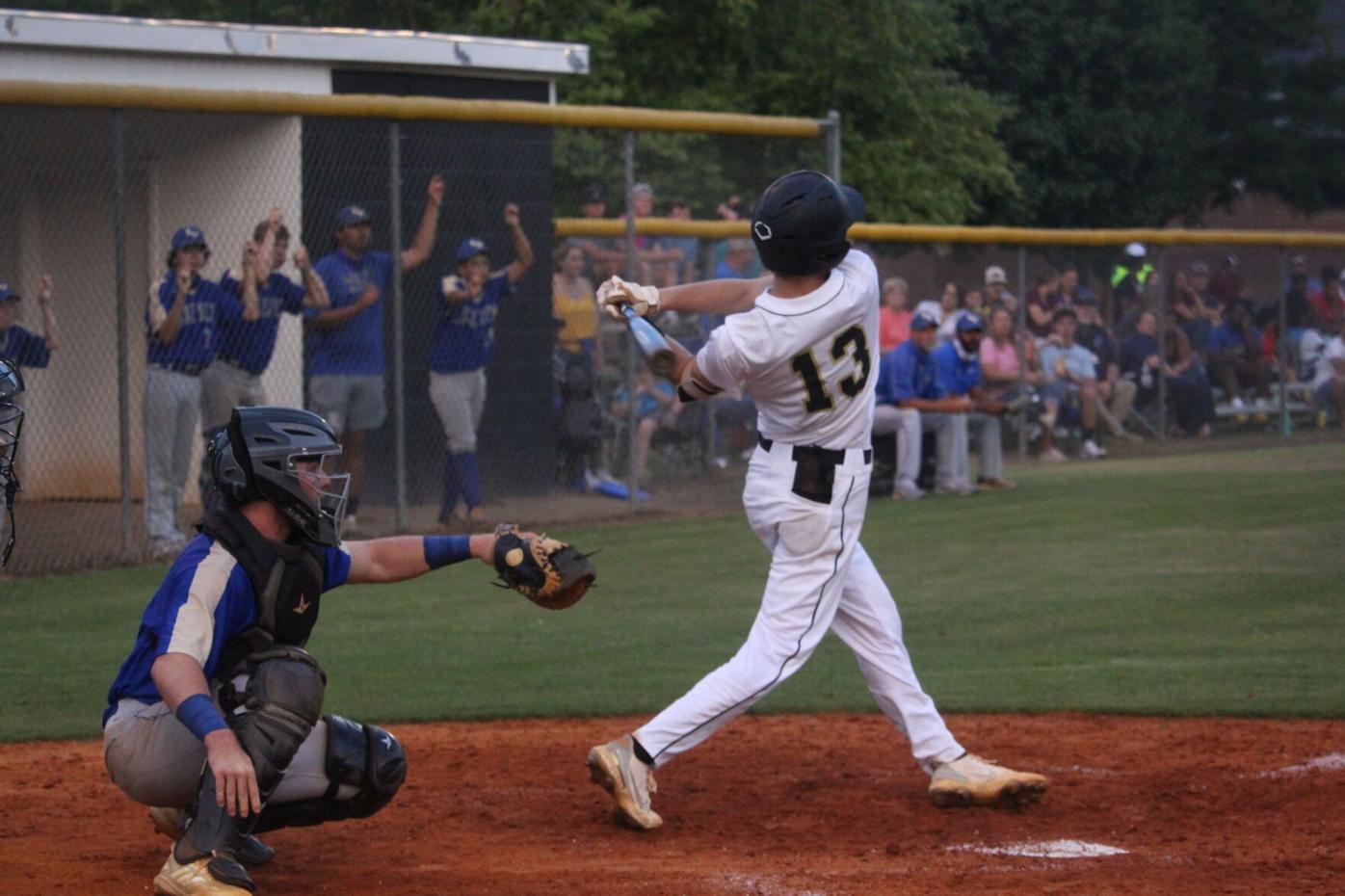 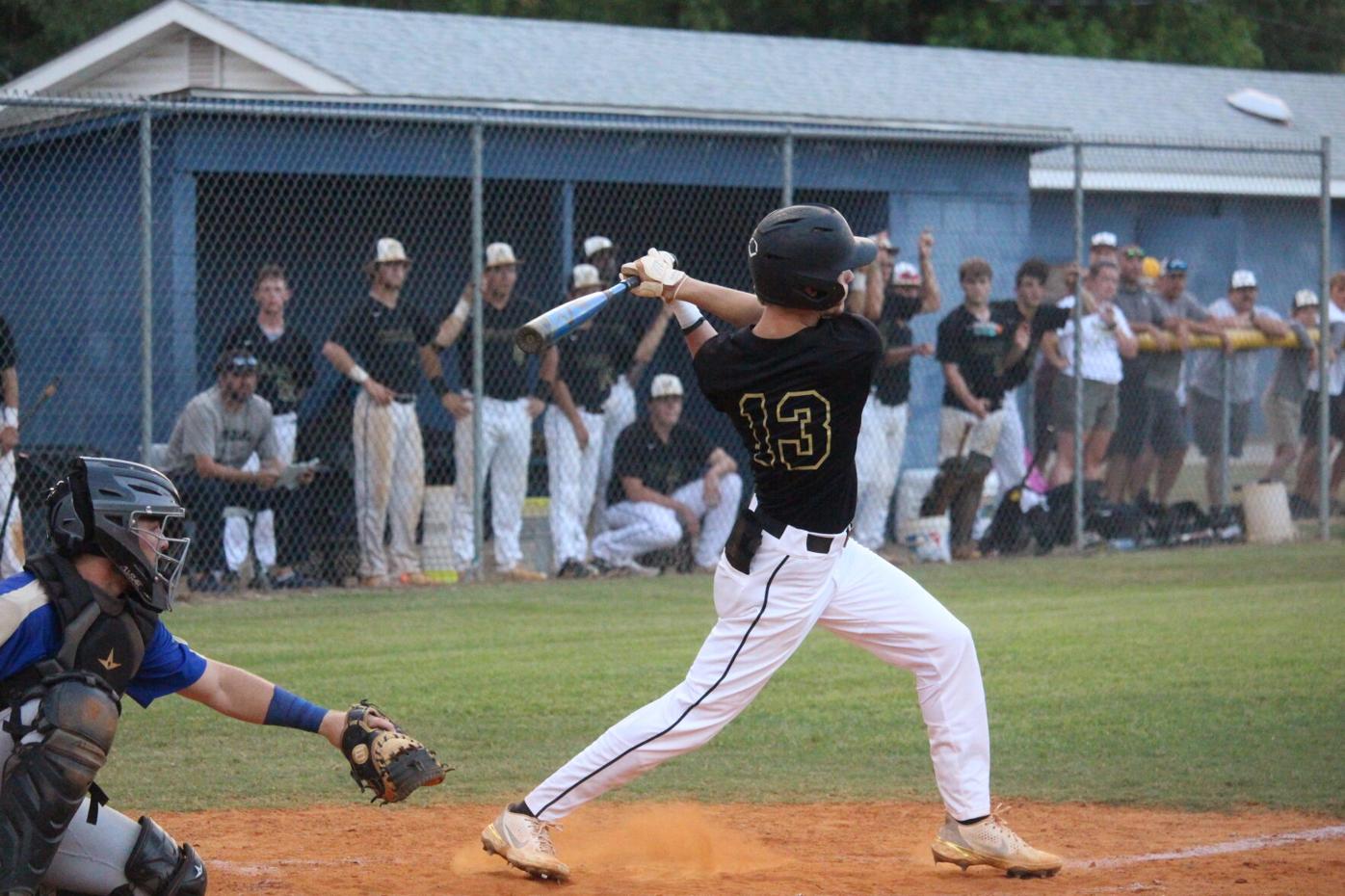 Dalton Stroud swings at a pitch in Game 2 of the Class 1A lower state championship series. The Trojans fell 10-2 to Lake View, ending their season. Photo by Ian Livingston Brooking.

Before the Green Sea Floyds Trojans made a run to the Lower State championship series, second year head coach Bradley Strickland wasn’t sure if a season was going to be happening.

“There were still restrictions on everything and all of a sudden you start hearing about more and more cases,” Strickland said. “I didn’t know what to expect, if they were going to shut us down or not.”

Despite the uncertainty, the Trojans still put the work in, getting ready for a season where some “new goals” were coming into play.

“We had a lot of stuff on our backs,” senior Jaquan Dixon said. “We had some things to get done. We wanted to try and get as far as we could.”

The team would go on to win 15 consecutive games.

Dixon said that the team had a “different mindset“ for each game.

Two of those 15 wins came against the team that would eventually knock the Trojans out of the playoffs: Lake View. While the win margins of a 6-3 and a 13-8 victory over a rival looks good on paper, Strickland described both of those games as “battles.“

“They got a good bunch,” Strickland said. “They know how to play. They’re well coached. It’s always a ball game.”

The Trojans outscored opponents 167-27 during that 15 game winning streak, including eight games where they scored double digit runs and five games where they scored 15 or more runs. The team’s 15-game winning streak came to an end on May 10, 2021 with a 2-0 loss to Aynor. That shutout loss was just a third time in the last 75 games, dating back to the start of the 2018 season that the Trojans had been held scoreless.

Seeing that Aynor is a 3A opponent, the game was more so used as a tuneup game for the postseason.

“Our regular season stopped and we tried to get ready for the playoffs,” Strickland said, adding that seeing the “bats and arms” of the Blue Jackets is what his ball club needed.

The Trojans playoff run started with a 5-3 win over Branchville. Green Sea Floyds fell 6-1 to East Clarendon on May 17, forcing them in a win-or-go-home scenario for the rest of the district playoffs.

The Trojans took care of business against Branchville on May 19, winning 12-2. Despite trailing early, Dixon just needed a little pep talk to get himself refocused.

“I told him, 'You walk one more batter, I’m done. I’m pulling you,'” Strickland said postgame.

Going into the second inning, Dixon assured his coach that he was good and then pitched five scoreless innings. Senior shortstop Grayson Carroll was a perfect 5-5 on the night, getting the walk-off hit to run rule Branchville.

“We came out swinging the bats and had a positive attitude,” Dixon said.

The runs kept on coming in game one against East Clarendon on Friday, May 21, as the Trojans won 11-1, forcing a winner-take-all game two for a spot in the lower state championship.

It was the pitching of junior Dalton Stroud that played a critical role in their success in game one. Strickland said that before the season started, Stroud was on the list by many of his teammates to be a captain. Eventually, seniors Nick Clemons, Grayson Carroll and Jaquan Dixon were selected as captains but Strickland said the votes for Stroud spoke highly of the kind of kid that Stroud is.

“I’d be surprised if he isn’t a captain next year,” Strickland said, adding that Stroud had grown tremendously throughout the season. “Since [the first Lake View game], he’s been the kid I look at and say, ‘Alright, he’s got the ball in his hands. We’re in good shape.' He’s wanted the ball in his hands. He’s never asked to be taken out. He’s never said ‘hey, I’m getting tired.’ It’s always ‘man, I feel good.’”

Following Stroud’s performance in game one, the Trojans once again had their backs against the wall, trailing East Clarendon for much of the game before tying things up to force extra innings.

With two outs in the bottom of the fifth, Carroll tied things up at three with a shot to deep center. East Clarendon was able to get out of a bases-loaded jam to keep things even.

In the top of the seventh, Aaron Graham made an incredible play in foul territory and attempted to throw an East Clarendon runner out at home. But the umpire called the Wolverine runner safe and the Trojans had to come from behind once again.

“We’re a team that can get it done,” Graham said postgame.

Trojans catcher Kaden Watson got a big hit go get on base and immediately made it a point to Strickland to “let me run.”

“I was all for it,” Strickland said postgame, regarding the confidence his catcher had.

Down to their final out, the Trojans' right fielder Hayden Enzor put one in shallow center and brought in Watson — the tying run.

Still, the Trojans could not find a way to win it in the seventh and the Wolverines were able to force extra innings. Stroud came in to relieve Williams and remained dominant on the mound. In the bottom of the eighth, it was bases-loaded once again for the Trojans, with Grayson Carroll, the walk off hero from Branchville two days earlier, at the plate. While Carroll looked locked and loaded to play the hero once again, the ball sailed over his head and off went Aaron Graham, sliding into home and sending the Trojans to the Lower State Championship.

It was a game that Strickland described as his favorite from the entire season.

“Any game you win is a fun game," Strickland said. "But to go into extra innings and it’s all or nothing right here and to watch them just never quit, that spoke volumes for me in terms of growth as a team and as a family to watch them pull together.”

Following the loss, players were overcome with emotion as many of them had played their final game of high school baseball. Strickland sympathized with his ball club and the emotions they were feeling postgame.

“The biggest thing I can tell them is I know what it feels like,” Strickland said. “I love them. Regardless of what happens after that in life, wherever they go, they know I’m here for them.”

“I’m just going to miss them,” Strickland said. “Not just what they did for me on the field but that’s just a special bunch.”

It was certainly a family atmosphere for the Trojans.

While Strickland is certainly losing many key components to the past three years of success, there are some leaders like Stroud and Watson who are returning next season. Strickland said he is excited to see that confidence that Stroud exudes on the mound back at work in 2022.

“It just shows how hard he works,” Strickland said. “You do something long enough, it becomes second nature. He’s put himself in situations to be successful.”

“[Mason] was instrumental in getting a runner on base and run bases for me,” Strickland said. “I have the utmost confidence in him to be able to step in and play defense like he’s supposed to.”

The Trojans finished the 2021 season with a record of 19-6, the class 1A lower state runners up, district champions, undefeated in region play and appeared in their third straight lower state championship series. While Strickland did fall short of a goal of a 20-win season, he's still proud of everything the team did in 2021.