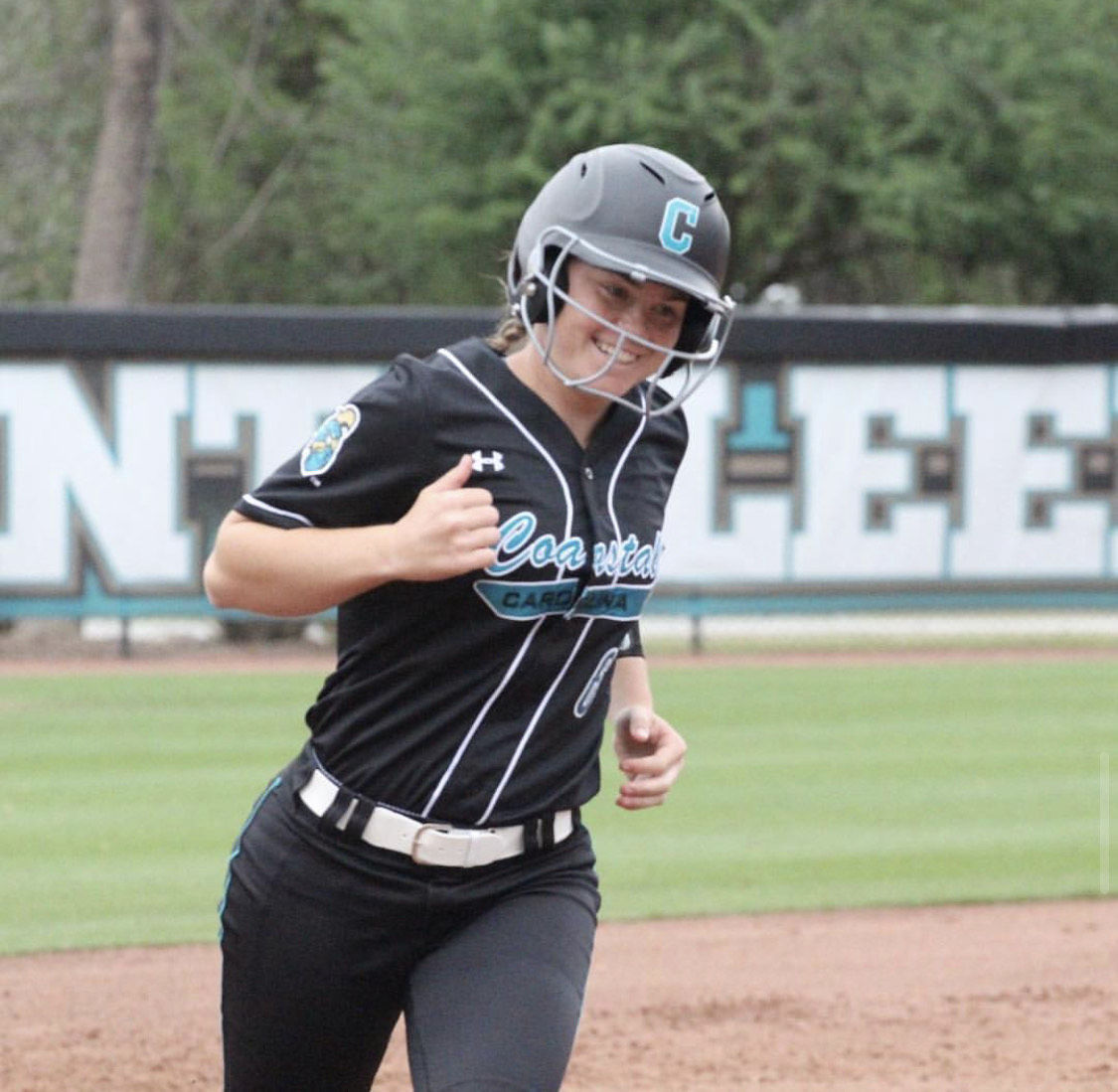 Courtney Dean is back for the Chanticleers this season. 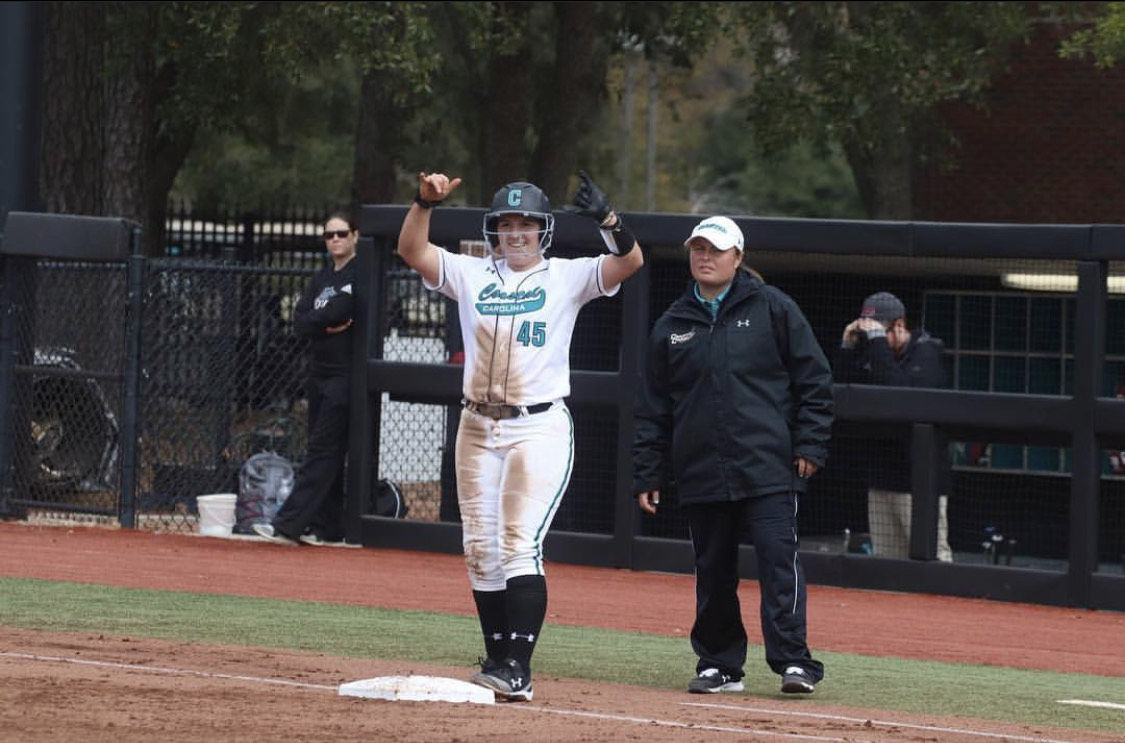 Taylor Sweigart is returning from an injury that cut her season short last year.
1 of 2

Courtney Dean is back for the Chanticleers this season.

Taylor Sweigart is returning from an injury that cut her season short last year.
Coastal Carolina's softball team begins its 2020 season this week with high expectations.
That's in large part because of two players who will be mounting comebacks this spring.
The Chanticleers lost outfielder Courtney Dean and infielder Taylor Sweigart, both juniors, at critical points last year, a season that ended one victory shy of the school's first conference championship since 2012.
Sweigart, who has started in all 79 games she has played for CCU, blew out her knee on April 14 when she tried to make a play at second in a conference matchup versus Texas State.
“I knew my season was over the second it happened,” she said.
What made things worse for Sweigart’s situation is that in her freshman year she suffered an injury to her knee that ended her season with just over three weeks to go in the regular season.
“Everyone felt so bad for her because she had previous injuries and she was working so hard getting back to peak form,” Coastal Carolina head softball coach Kelley Green said. “You definitely feel bad as a coach because one, you know what she already experienced and went through in the off-season last year and was doing really well throughout 2019. Secondly, from an offensive perspective, she was one of our best hitters and a great second baseman.”
The loss of Sweigart hit hard with Dean because the two are roommates at Coastal and the connection between the two is evident on the softball diamond.
“I saw how hard she worked to get back from the previous injury and knowing that our time playing together for the rest of the season was over was really upsetting,” Dean said.
Sweigart played in 37 games in 2019 compared to the 42 she played in 2018. Despite playing and five fewer games, she already had more hits, more homeruns and a much better batting average in her sophomore season compared to her freshman year.
Losing her forced the coaching staff to quickly rearrange lineups and ask players to step up with less than a month to go in the regular season and some big conference matchups on the horizon.
Then came May 2. Dean was attempting to beat a throw to first and then hobbled away from the base awkwardly.
“I was very confused when it happened,” she said. “I knew I had done something wrong because I didn’t feel right. I just didn’t know what I had done.”
It turned out she had torn her ACL and would miss the remaining two games of the regular season as well as the Sun Belt Conference Tournament.
Despite the critical losses, the team willed its way to the conference championship game against the Louisiana Lafayette, winners of three out of the last five Sun Belt conference tournaments, a team that was 49-4 going into the championship game and ranked No. 7 in the country.
“What made us a more cohesive team was knowing that neither of them could be there for the conference tournament,” senior infielder Kassidy Smith said. “Whether it was because of rehab or surgery, they couldn’t travel down to Texas for the tournament so that just made us fight even harder so that we could possibly bring a trophy back home to them.”
Coastal gave the Ragin’ Cajuns everything they had but ultimately fell short, losing 1-0 in the Sun Belt championship game on May 11.
“Our team handled that situation very well,” Green, the coach, said. “What a lot of people didn’t see was the work being put in before those situations even happen. We had people who weren’t getting a lot of playing time or playing in the positions they’re not used to and we had to readjust and ask those people to step up because of the situation we were put in.”
Green mentioned the outfield play of Stavi Auger. Auger had never played right field prior to the 2019 season and was making memorable catches and throws that helped Coastal win critical games down the stretch and in the conference tournament.
“After Courtney went down, we moved Stavi over to centerfield and then you see her making diving SportsCenter Top 10 plays as a centerfielder,” Green said. “You work hard all year because you never know when that opportunity or when you’re needed somewhere else.”
While both Dean and Sweigart could not make the journey to San Marcos, Texas, to see their counterparts play in the tournament, they did have each other throughout the recovery process.
“We saw each other multiple times a day and went through rehab together,” Dean said. “It definitely helped having each other.”
“We took advice from each other and learned from one another on how to get better and get better the right way,” Sweigart said.
After months of grueling rehab, the two were able to work themselves back to the first day of practice on Jan. 6.
While both Dean and Sweigart are excited for that first game against Virginia Tech on Friday, the two are quietly returning to form.
“I’m just happy to be back on the field,” Dean said.
“I’m going to take every opportunity that I get,” Sweigart said.
Coastal Carolina begins 2020 by hosting the Coastal Carolina Kickin’ Chicken Classic. The Chanticleers open the tournament and their season against the Virginia Tech Hokies, a team that made it all the way to the 2019 NCAA Lexington regional final.
First pitch between CCU and Virginia Tech is set for 5:15 p.m.