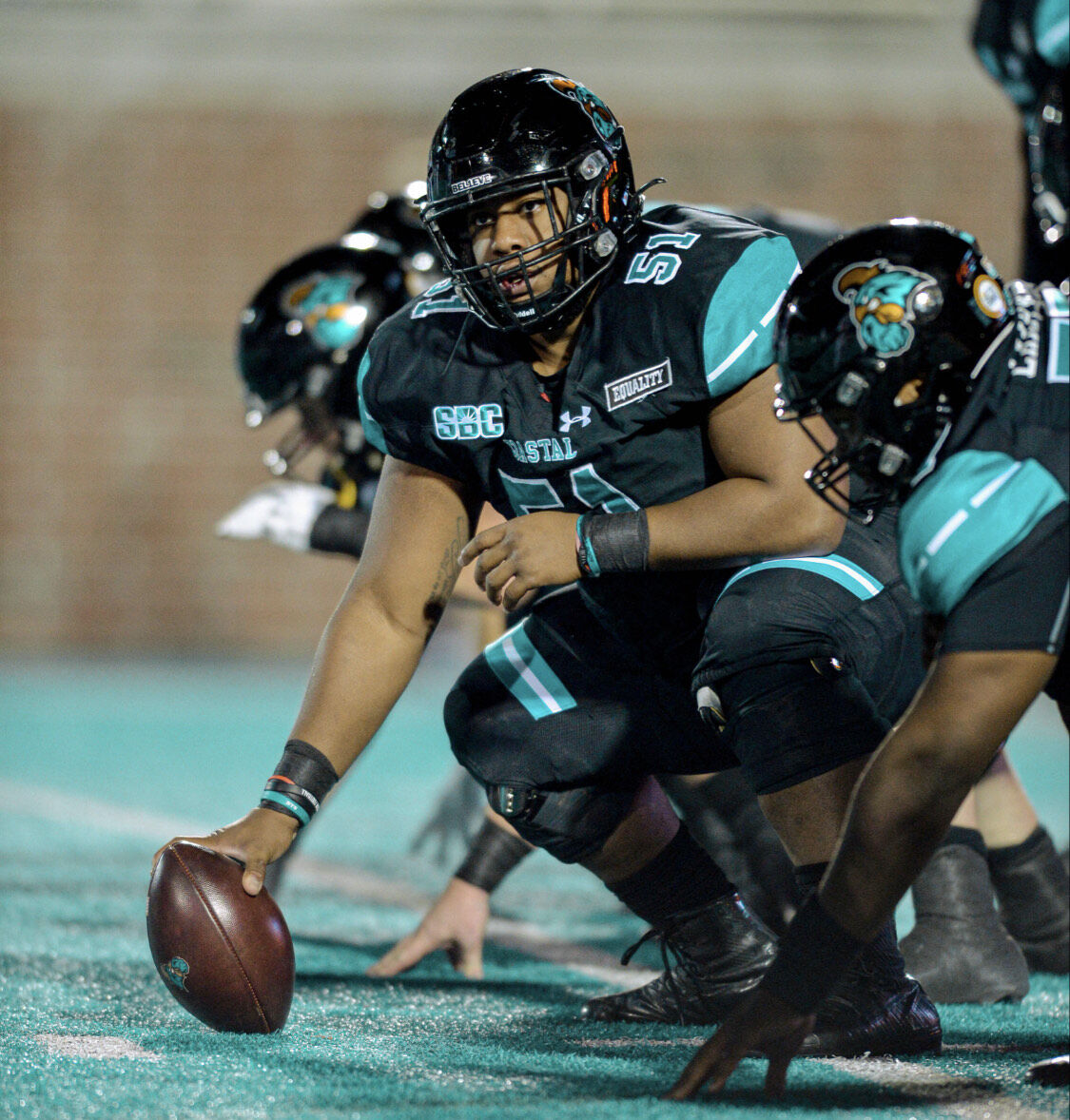 Sam Thompson started his career as a walk-on and has now become one of the best offensive lineman in college football this season. Photo courtesy to Coastal Carolina. 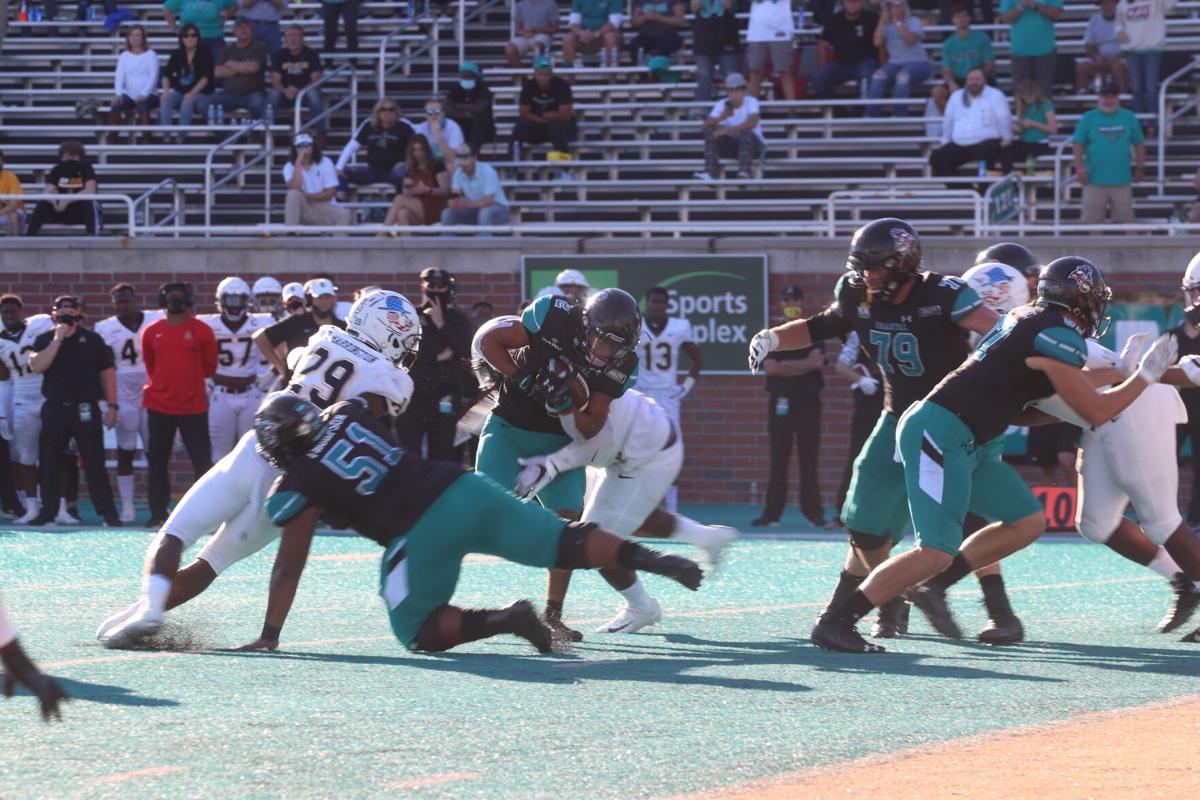 Thompson (51) clears a path for running back Reese White to score the go ahead touchdown in CCU's 34-23 win over Appalachian State on Nov. 21 at Brooks Stadium.

Sam Thompson started his career as a walk-on and has now become one of the best offensive lineman in college football this season. Photo courtesy to Coastal Carolina.

Thompson (51) clears a path for running back Reese White to score the go ahead touchdown in CCU's 34-23 win over Appalachian State on Nov. 21 at Brooks Stadium.

At 5-9, Sam Thompson is one of just two linemen standing under 6 feet in the Sun Belt Conference. He is the shortest starting offensive lineman in the country.

"Nothing is ever too big for Sammie," Coastal Carolina senior offensive lineman Trey Carter said.

Carter added that Thompson laughs at being called short, saying that because of his height, no one really views him as a football player.

"I don't think he really cares if people call him short," Carter said.

Teammates and coaches have nothing but positive things to say about Coastal's center.

"Every day when he comes to practice, it's just a pleasure," Coastal offensive line coach Bill Durkin said.

Ahead of their matchup with BYU on Dec. 5, there were many storylines aside from how the two programs managed to schedule such a high octane game within 24 hours. One of them was the offensive line of Coastal going up against the monstrosity that was the BYU front three.

However, there was some love going the way of Coastal Carolina, especially from David Pollack, a commentator on ESPN's popular show "College GameDay," which was in Conway for CCU-BYU.

“How do you not love an offensive lineman at center that’s 5-9, 300 pounds that’s running your unit?” Pollack said, referring to Thompson. “What part of that is not freaking awesome?”

Leading up to that game, all anyone heard was how much bigger BYU was over Coastal and that it was a matchup of "men versus boys."

"We took that personal," Carter said. "We didn't speak too much on it. [The offensive line] just looked at each other and grinned."

The large scale challenge of then No. 8 BYU's defense didn't phase Thompson, or the entire CCU offensive line. The shortest player on the Cougars starting defense that night was three inches taller than Thompson, while the shortest of BYU's front three was 6-3.

Thompson was matched up against BYU's Khyiris Tonga, a 6-4, 321-pound nose tackle that many envision going within the first three rounds of the 2021 NFL Draft. Tonga didn't get to CCU quarterback Grayson McCall once.

"After the game, he walked up to me and said, 'I respect you. I respect your game,'" Thompson recalled.

Despite how far he's come, Thompson said he still needs to "find a way to get better."

That's how he believes he's gotten to this point anyway.

"Being able to be coachable, that's what helped get me this far," he said.

"He's the kind of guy that in practice, if he doesn't do something right, he'll ask, 'Coach, can we do that again?'" Durkin said. "He wants to continually improve and get better."

Durkin said that while some may view team captain and fellow offensive lineman Trey Carter as the "heart and soul" of the O-line, it's Thompson who "keeps everyone together."

"He's really smart. He knows exactly what is going on," Durkin said. "He makes a ton of calls for us. He gets us all on the same page. I rely on him heavily."

Thompson's journey to becoming a center for a Top 10 program wasn't traditional by any means. He originally came to Coastal as just a regular business management student.

But former offensive line coach Patrick Covington suggested he try out as a walk-on. Thompson called the process "wild."

When he tried out, Thompson passed the evaluation process and made it to the spring roster to go through spring camp.

Thompson was on the roster for the 2018 season. Along with the ups and downs that came with the year, such as losing the last four games and coming within one game of being bowl eligible, Thompson also had his struggles. He played in just two games and had hoped to be featured more.

“I was behind a very good center and there were a few games where that center would get hurt and I thought I was potentially able to go in and kind of earn my spot and contribute,” Thompson said. “But I didn’t.”

Thompson described that period as a let down. All these questions entered his mind. Should he continue to work and see if he got anywhere or get out of the game? After the 2018 season, Joe Moglia stepped down as head coach and Jamey Chadwell was appointed to fill the vacancy. The coaching changes didn't make the decision for Thompson any clearer.

Even through all the indecisiveness, Thompson still pushed himself in practice. The tenacity that Thompson showed during those challenges was something Carter took notice of.

“That  guy just puts his head down and works, you know?” Carter said. “He has everybody in the world telling him he’s too little. He’s always got something to prove.”

Chadwell did have a place for Thompson. Since the coach took over officially in 2019, Thompson has played in 22 of Coastal's 23 games over last two seasons. Thompson has started 21 of those games.

After one practice in the spring, Thompson was called into the head coach’s office. Chadwell told him he was “needed“ in the upcoming season. Coastal was going to put a 5-9 center on scholarship.

The 2020 season has been a dream one for the Chanticleers. Undefeated regular season for the first time in program history. A share of the Sun Belt title. First trip to a bowl game.

Multiple Coastal players have been recognized for their contributions this year, including Thompson.

On Dec. 15, he was listed as a semifinalist for the 2020 Burlsworth Trophy, an award that is presented annually to the nation's top player who began his career as a walk-on. Former Socastee Brave and Clemson wide receiver Hunter Renfrow won the award in 2018. While Thompson was not among the three finalists, he was grateful to be recognized on the national stage.

"It's amazing," Thompson said. "I never expected to come into college as a normal student and then walking on and then being in the position I am now. I never ever thought that I would do all that. … It shows how much my hard work has paid off."

AYNOR: 2,3&4BR MH's with all appliances, Cent.H/A including water, grass