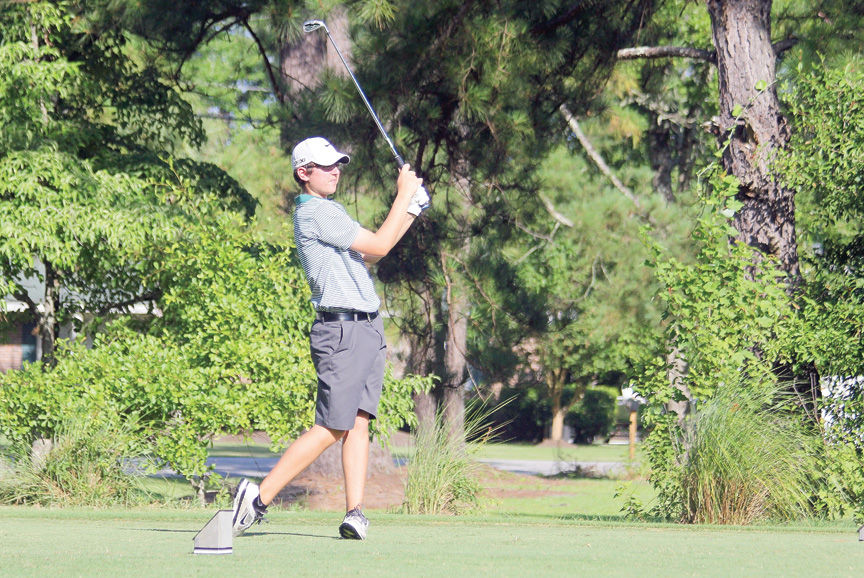 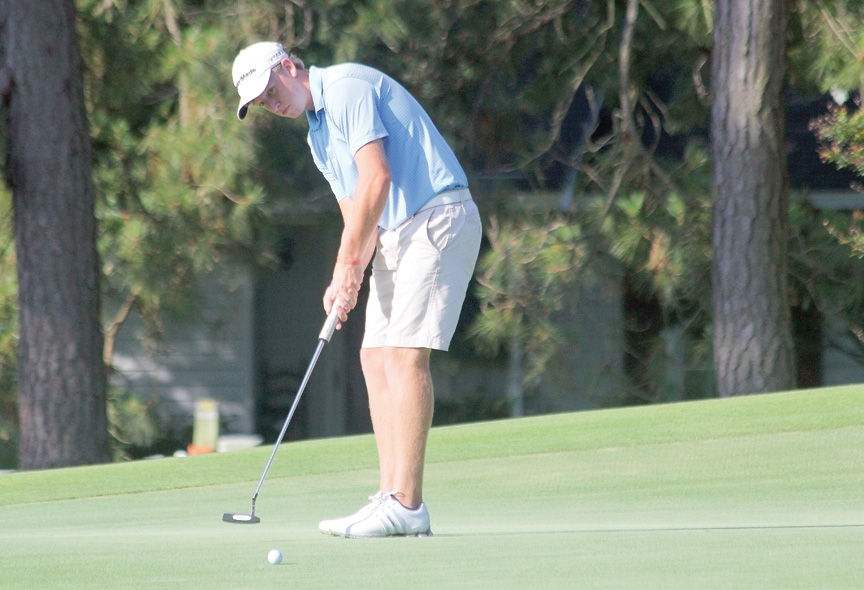 Karsten Kenley of Myrtle Beach rolls a putt in the Carolinas PGA Junior qualifier at the Hackler Course at Coastal Carolina University. 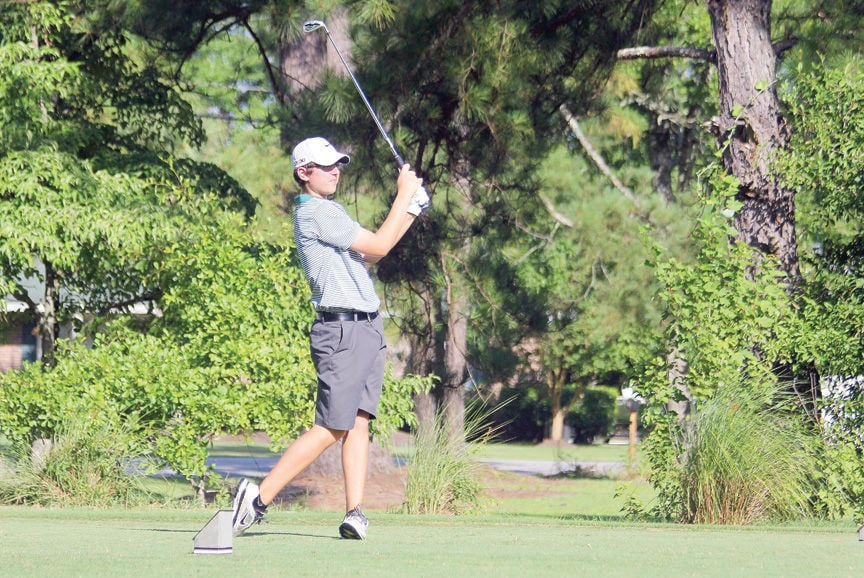 Carolina Forest golfer Tanner Smith played his final 27 holes in 3 over par during the Carolinas Junior PGA qualifier June 28-29 at the Hackler Course at Coastal Carolina University. Playing at the same course Saturday in the Panther Invitational, Smith fired a 2-over par 74, coming within five shots of the leader.

Patrick Golden was the top local player in the recent Carolinas PGA Junior qualifier at the Hackler Course at Coastal Carolina University, finishing at 5 under par after shooting 69-70—139 to tie for third. He was three shots back of medalist Blake Taylor of Aiken, who shot 68-68—136 to finish at 8 under par.

Karsten Kenley of Myrtle Beach rolls a putt in the Carolinas PGA Junior qualifier at the Hackler Course at Coastal Carolina University.

Carolina Forest golfer Tanner Smith played his final 27 holes in 3 over par during the Carolinas Junior PGA qualifier June 28-29 at the Hackler Course at Coastal Carolina University. Playing at the same course Saturday in the Panther Invitational, Smith fired a 2-over par 74, coming within five shots of the leader.

The weather seemed to realize it needed to cool down over the weekend, just in time for the Carolinas Junior PGA Tournament at Hackler Golf Course at Coastal Carolina University.

With the temperatures staying in the 80s and the sky clear and blue, the best golfers from the southeast ages 7-18 invaded the Hackler Course June 27-28.

More than 300 participants were trying their best to drive their balls clear of sand traps, lakes and the rough on Hackler’s 18-hole course. The overall boys’ and girls’ winners advance to the national championship at Miramont Country Club in Texas.

The Junior PGA Championship is open to one boy and one girl champion from each of the 41 PGA Sections.

Many past champions have gone on to careers on the PGA and LPGA Tours. Famous alumni include Tiger Woods, Michelle Wie, Hunter Mahan, Jordan Spieth, Lexi Thompson and Phil Mickelson.

Many of the participants were local golfers including Carolina Forest’s Tanner Smith, Myrtle Beach’s Karsten Kenley, and Waccamaw’s Patrick Golden.

Although there were 300 participants on the course for the three local golfers, their biggest competitors were themselves.

“I really want to do better than last year.” Kenley said before his tee time.

Kenley, Smith and Golden all placed in 2014, so expectations were high.

Golden was the top local player, finishing at 5 under par after shooting 69-70—139 to tie for third. He was three shots back of medalist Blake Taylor of Aiken, who shot 68-68—136 to finish at 8 under par.

Golden, who recorded eight birdies over two days, bogeyed No. 13 in the final round. He also carded bogeys on Nos. 2 and 3 in the opening round.

Smith and Kenley doubled bogeyed or bogeyed each of the three.

Golden, at only 15 years old, isn’t even thinking about colleges right now.

“I’m really just wanting to enjoy my time in high school right now, playing on the golf team, going out with friends and such,” he said.

He was all smiles after the tournament.

Kenley, who tied for 41st place at 7 over par, was up and down in both rounds. His opening round of 74 included three birdies, but also a bogey on the par 5 first hole and double bogey on No. 18.

Kenley closed with a 77 in a round that included three more birdies—including birdies on Nos. 1 and 18—but it also included six bogeys and a double bogey on the 12th.

“It wasn’t my best performance, but it was a fun time, with people I don’t get to play with very often,” he said. “It was a good weekend, just not my best game. Plans for next year? Basically finish up school at St. James and we’ll see.”

Smith struggled on his opening nine in round one. He triple bogeyed the second hole and bogeyed four of the next five to turn in 43.

But Smith, a rising senior at Carolina Forest High School, played the final 27 holes in 3 over par. He carded two birdies on the back nine Saturday to offset four bogeys for a 38 for an 81.

Smith is an integral part of the CFHS golf team, and because of that he has been looking at colleges both near and far. He has made multiple college visits to both Coastal Carolina and College of Charleston, but for now he is focused on his senior season.

“This was a really great way to get ready for the season with the team, we play a lot on Hackler so it was good to swing the club around here and get re-acquainted with the course,” Smith said.

Smith tied for 56th at 10 over par over two days. He says he is most looking forward to getting back on the green with his coach and teammates.

“It’s always nice to play and keep in shape and form in the summer, but to get back in the routine with my teammates and get back in the groove is definitely something I’m looking forward to happening,” he said.

Smith said he can’t promise a return to the state championship this far ahead, but he remained confident. The Panthers qualified for the Class AAAA Tournament in 2015.

“I’m sure we will make it pretty far,” he said.

Also competing from along the Grand Strand was Holden Grigg of Myrtle Beach, who finished tied for 21st, shooting 71-77—148.