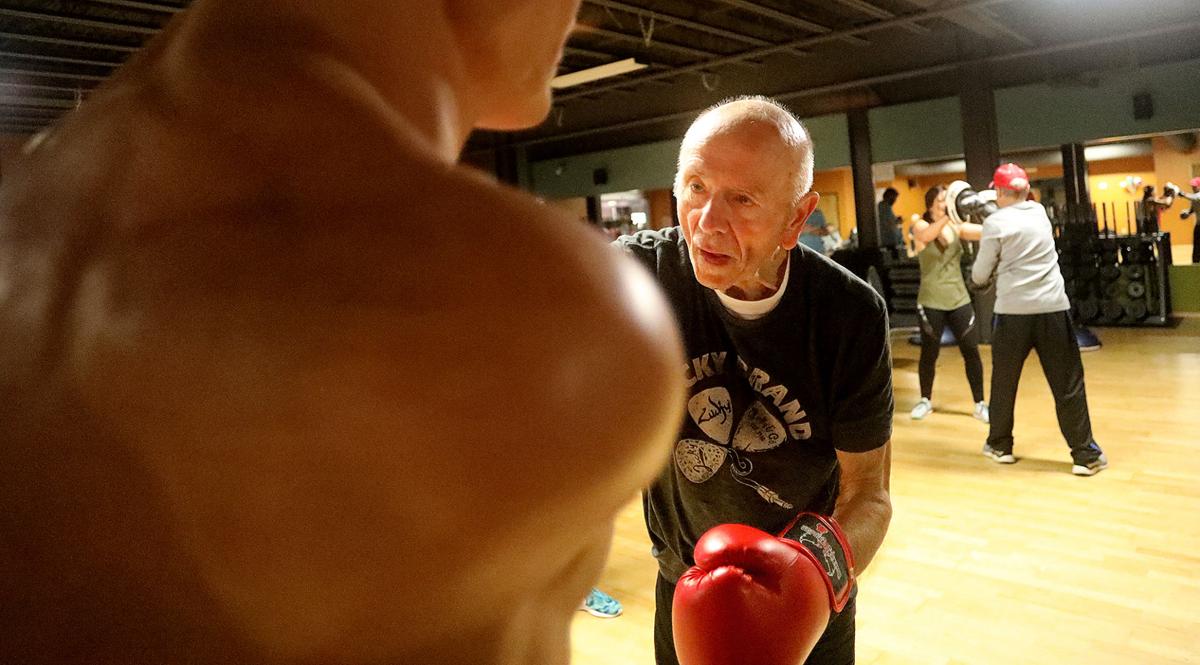 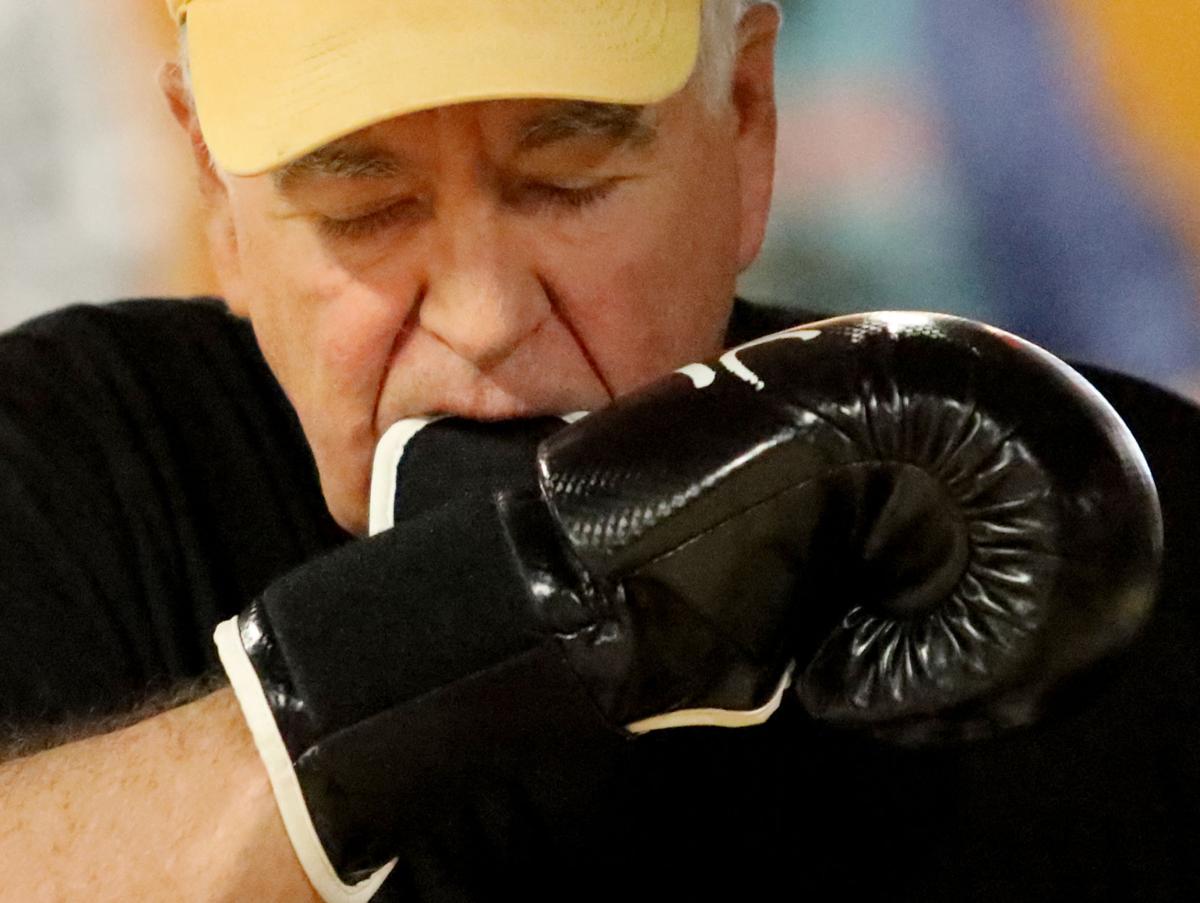 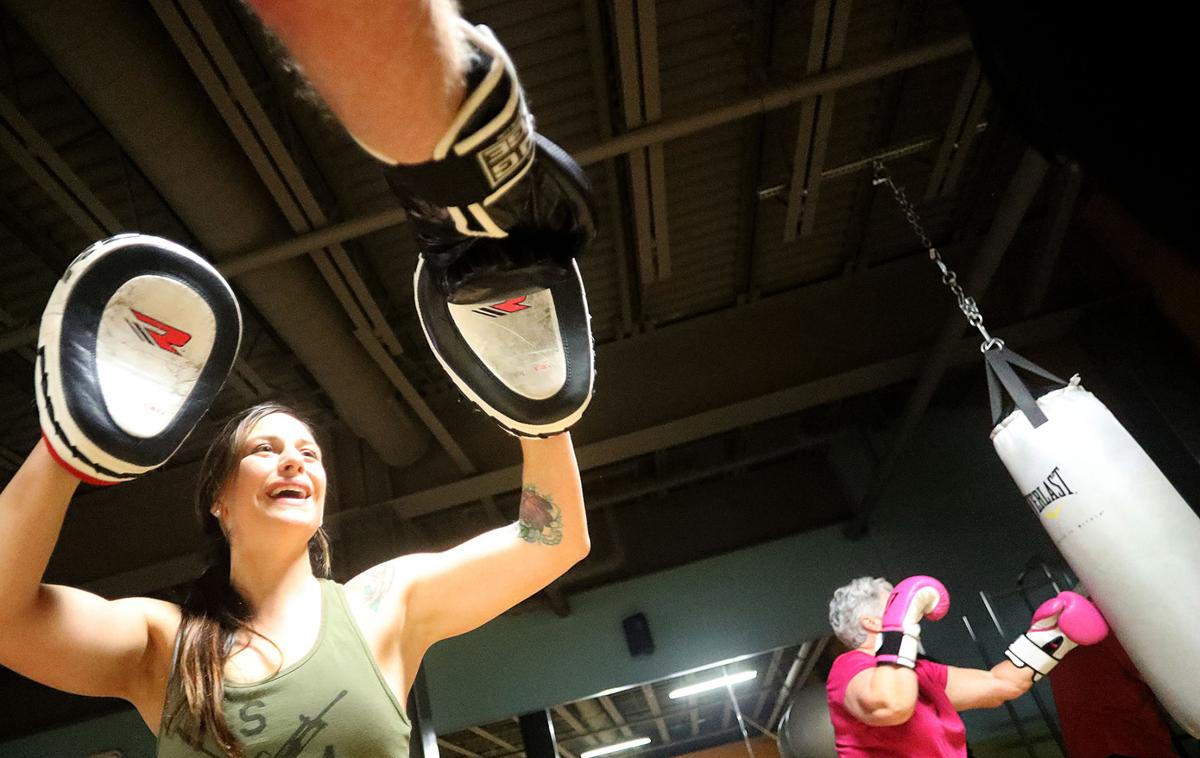 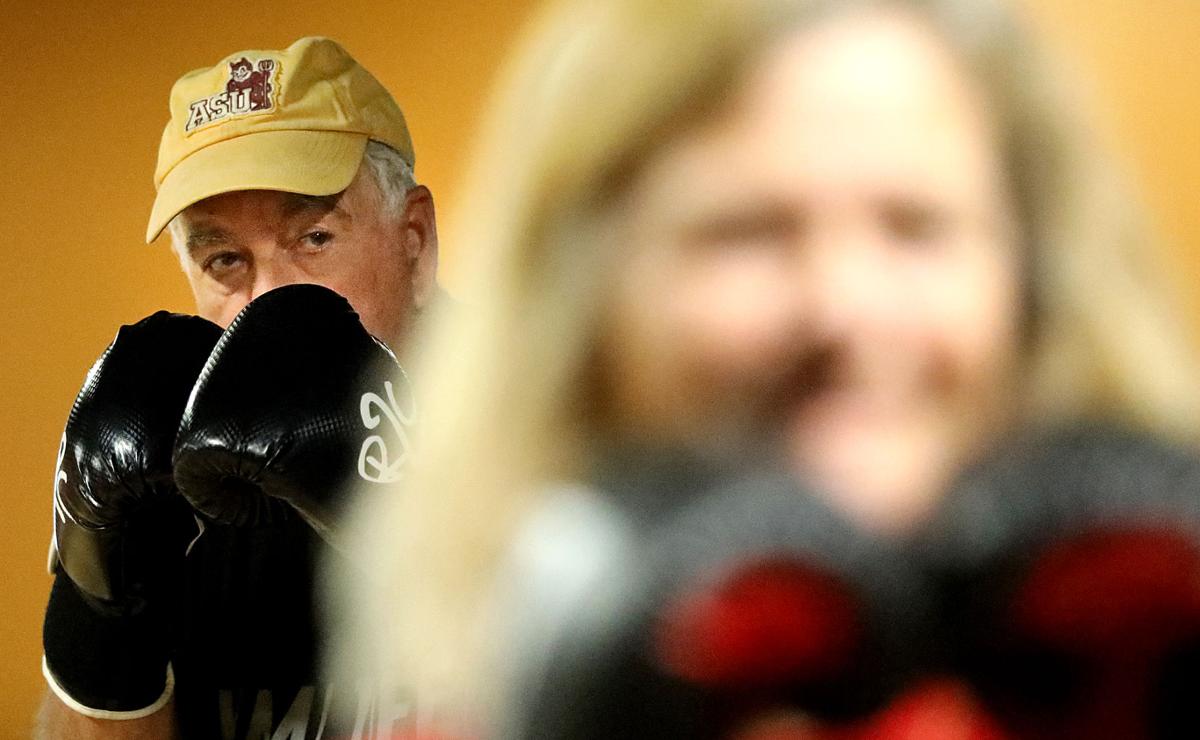 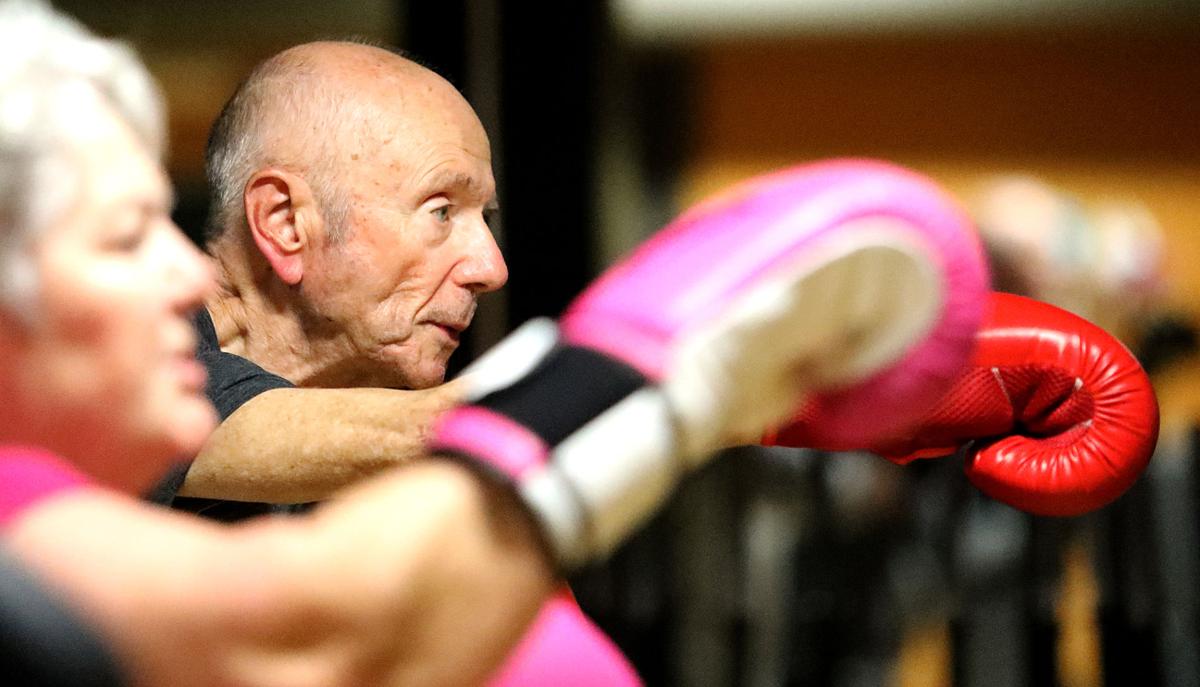 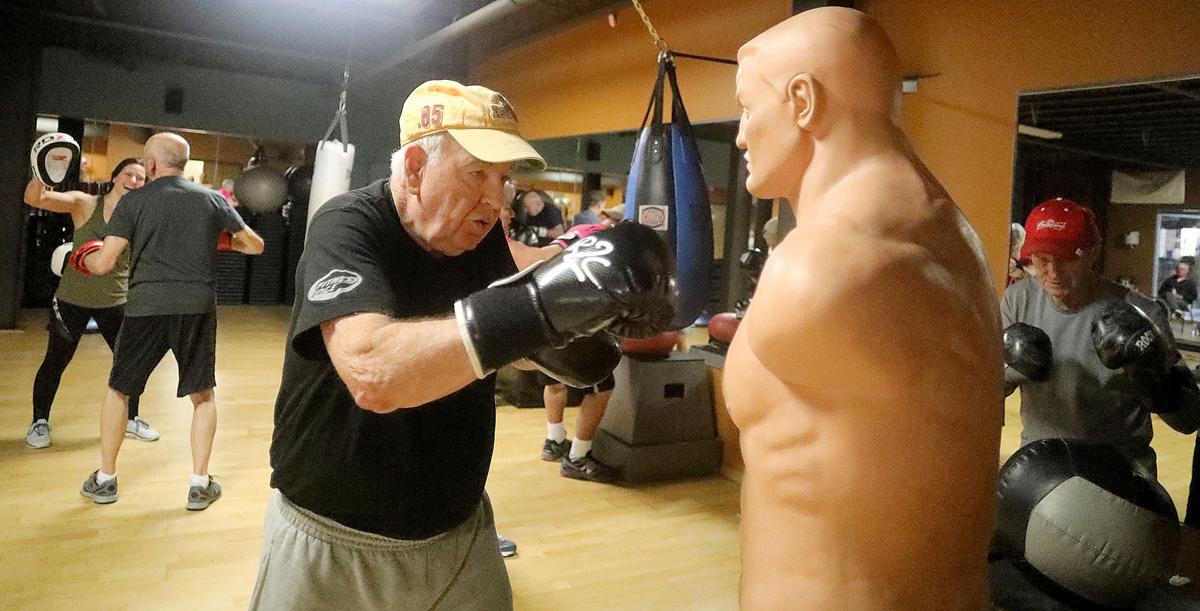 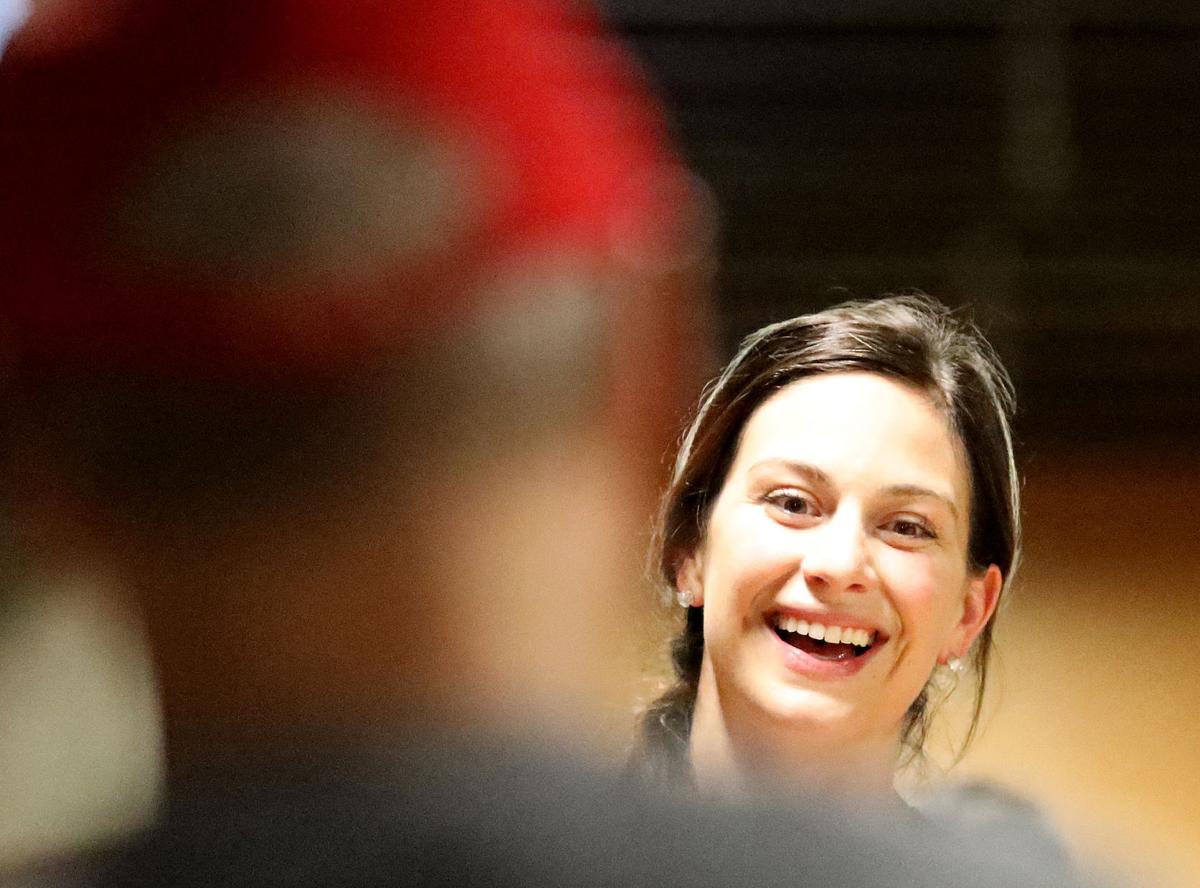 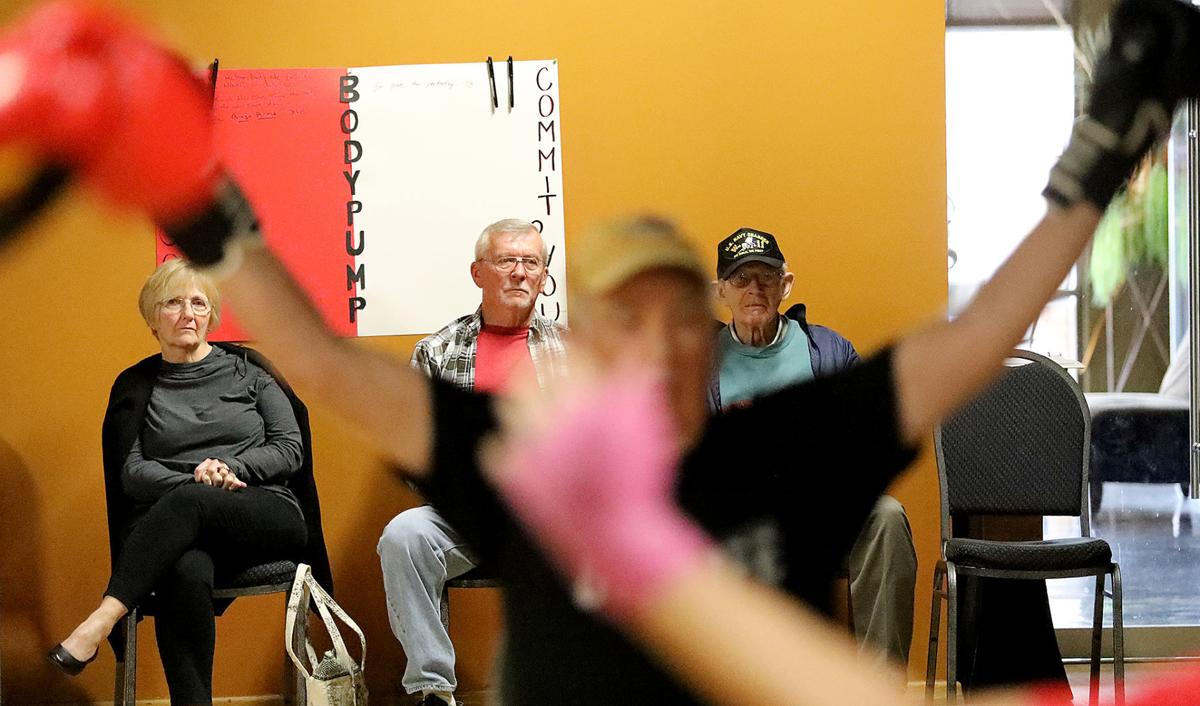 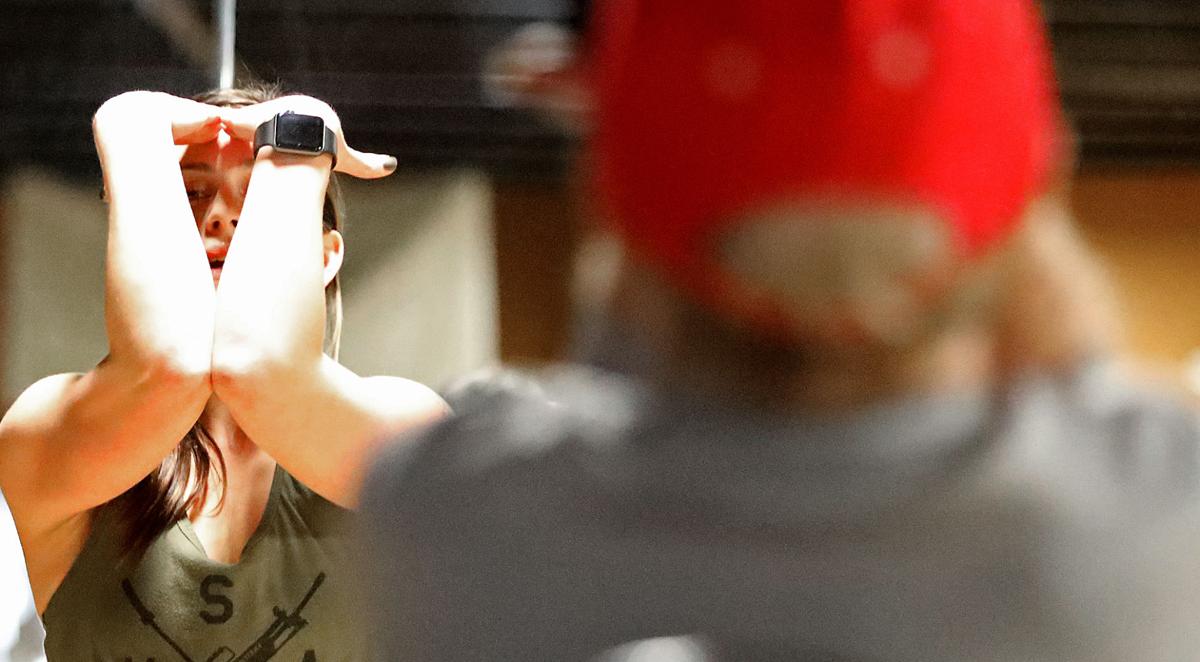 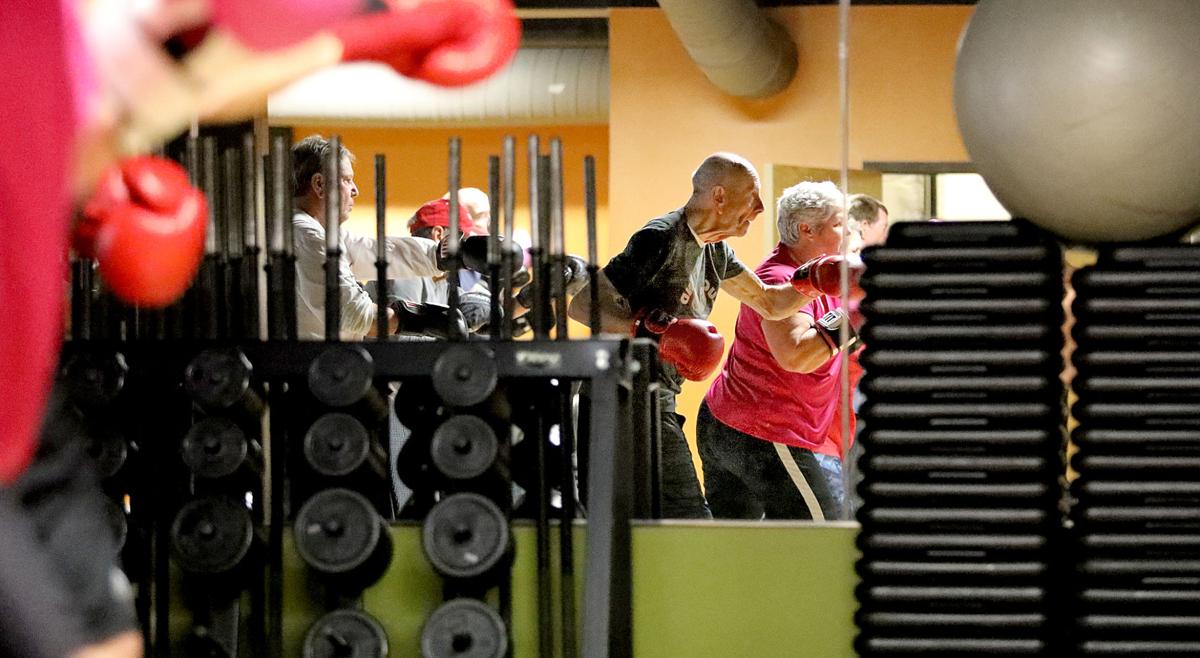 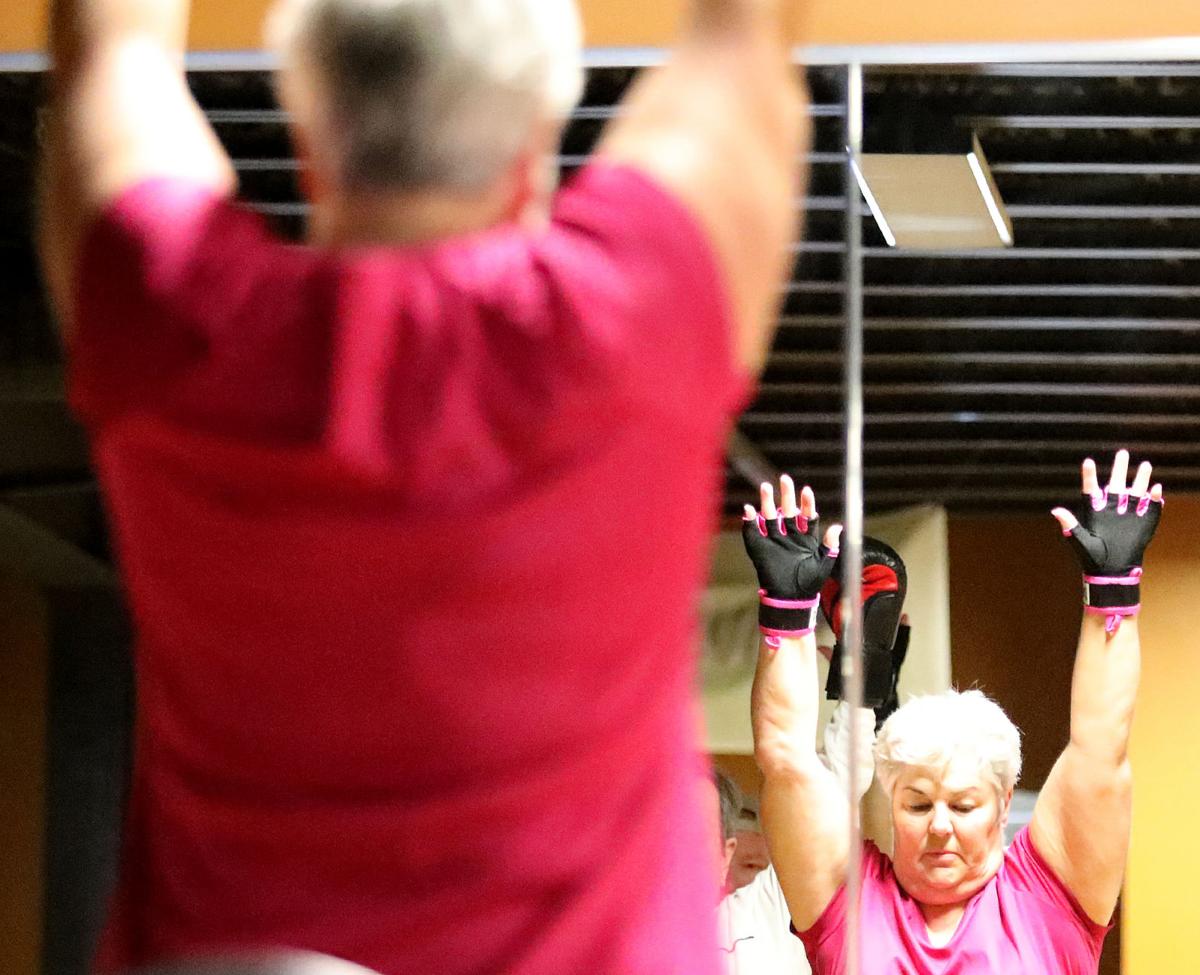 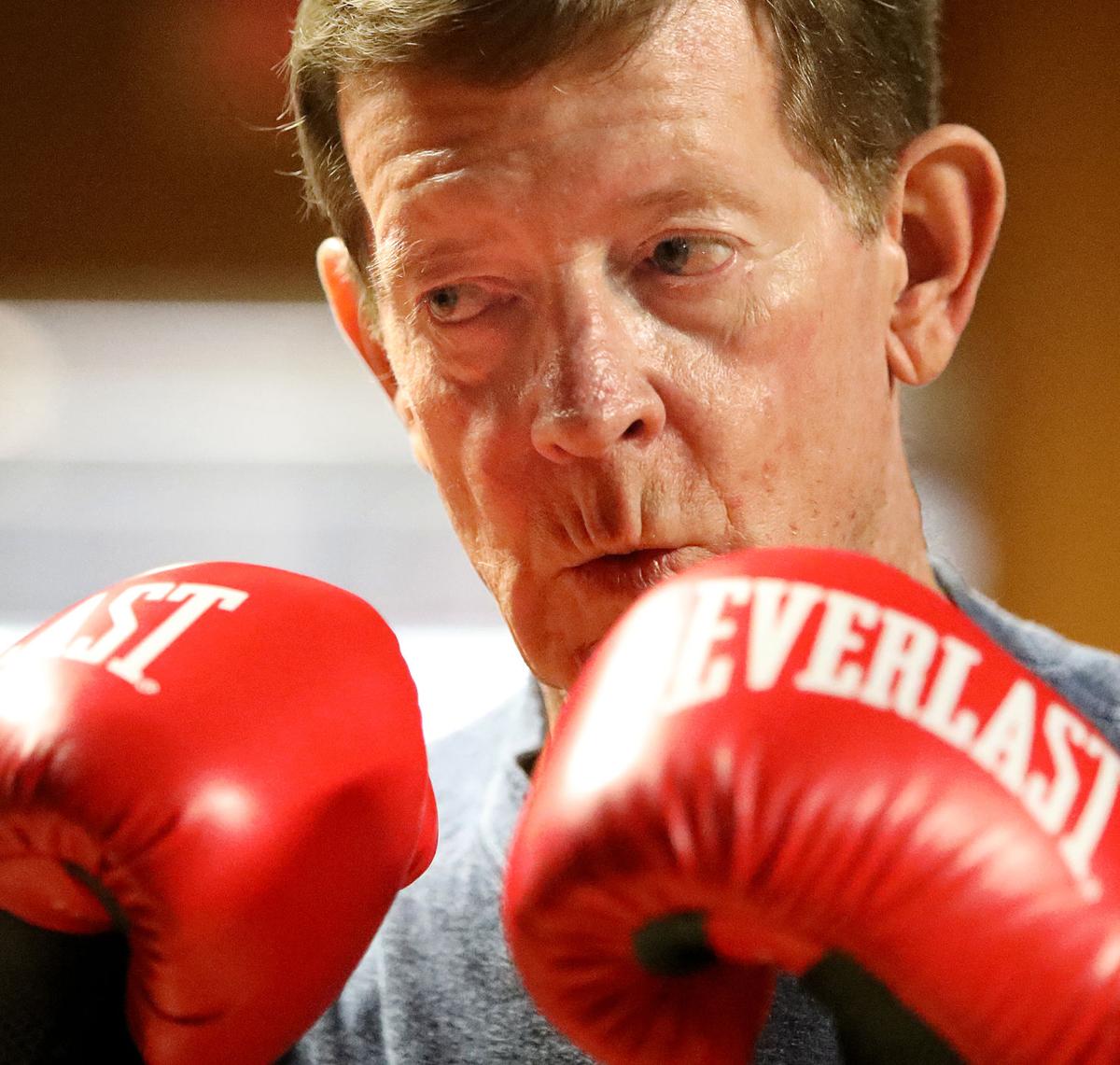 Jack McGeough focuses on the pattern.

As his trainer calls out the commands, the 75-year-old in gray sweatpants and a black “Gym Life” shirt works on his form, pulling back the invisible bow and arrow, rotating his hips and swinging his black gloves at the right time. Boxing is technical, methodical, and on Saturday afternoons, it’s what consumes his mind.

Equally important is what he’s not thinking about: the quiver in his hands, the slowing of his speech, dragging his feet on the carpet.

McGeough has Parkinson’s, a progressive neurological disease with no known cure. Symptoms often include tremors and stiffness, and they worsen over time. But research has shown intense exercise helps slow the disease, and boxing offers the kind of activity that works out both the body and mind. It’s why McGeough and his trainer, Nikki Shaffer, developed the “Punch out Parkinson’s,” class at Fitness Edge in Murrells Inlet last year.

“Now we’ve got something we can do with this disease,” he said, “instead of just sitting around waiting for it to gobble us up.”

Six years ago, McGeough received his diagnosis. His wife had noticed him shuffling his feet. His handwriting turned to scribbling. McGeough attributed the changes to old age, but after several bicycle wrecks, he sought a doctor’s opinion.

McGeough began looking at his lifestyle and changes he needed to make. He learned about the benefits of vigorous exercise, so he sought out a personal trainer.

Shaffer, who arrived at Fitness Edge in 2012, had never spent much time around anyone with Parkinson’s before taking on McGeough as a client. She studied different programs that would help him improve his strength and flexibility.

Shaffer had spent years doing boxing and kickboxing for fitness. She’d even competed in an amateur tournament and worked at an MMA gym. She attempted to persuade McGeough to try the workout, but he was initially hesitant.

“You’re not only working your body, you’re working your brain,” she said. “It’s corny, but I always say it’s almost like a crossword puzzle for your body.”

The idea of a boxing class for people with Parkinson’s came after McGeough visited his son’s gym in Rochester, New York, about a year ago.

After watching a similar class there, McGeough was convinced. He wanted to launch “Punch out Parkinson’s” in Murrells Inlet.

“We have to start this class,” he told Shaffer. “We’ve got to do this.”

Several months ago, they did. Since then, the class has grown to two Saturday sessions. More might be added.

The Pawleys Island man was diagnosed with Parkinson’s a year and a half ago. He built a schedule that included physical therapy and pain management, but he wanted another type of exercise beyond riding his bike and strength training.

“I’m a doer,” he said. “I’ve run, I’ve played tennis … I’ve biked all of my life. This is just an extension of it. Trying to make it as good as possible.”

Although there are other exercise programs for Parkinson’s patients, Shaffer said she’s been unable to find another Parkinson’s boxing class between Mount Pleasant and Wilmington, North Carolina.

The class does not involve fighting, at least not against other people.

Boxers focus on form, concentration and stamina, rotating between hitting a gray Everlast bag, a mannequin, Shaffer’s mitts or other stations. There are footwork drills, and even an end-of-class dance to wrap up on a high note.

Over the thuds of punches and the squeaking of the bags comes Shaffer’s relentless optimism. She pushes the group to keep going, to continue pounding as she counts down to the end of each set of reps.

Watching the class inspires her.

“They are literally fighting every day,” Shaffer said. “That’s what’s so insane and that’s what’s hit me so hard. … I couldn’t imagine every day knowing that my body is revolting almost against me.”

When he was drafted into the U.S. Army during Vietnam, he was exposed to Agent Orange and he suspects that contributed to his Parkinson’s.

Since he was diagnosed in 2008, he’s lost his sense of smell, his voice softened and he can no longer wrestle on the floor with his grandchildren.

“It just attacks you from all sides,” the 70-year-old said.

But while the former baseball coach and basketball referee can’t do some of activities he once loved, he can pound the bag with the best of them. The boxing training has helped his reach, flexibility and concentration.

“I’m not standing there hitting that bag feeling sorry for myself and [thinking] ‘Why do I have Parkinson’s?’” he said. “That’s never in my mind. It’s always, ‘What’s the right punch? What’s the right combination?’”

Those in the class say there’s a sense of camaraderie among the boxers, and a shared knowledge about how hard it can be to button a shirt or speak above a whisper. Sometimes there’s laughter, not in mockery but in understanding.

“They see other people with the same thing and struggling the way they’re struggling,” said Regina Herman, whose husband Tony travels from Conway to take the class. “That’s a big thing.”

McGeough said boxers’ wives have gushed about the class reviving their husbands, getting them off the couch and throwing punches.

He swears the training has helped his symptoms stabilize, though he knows that ultimately the disease can’t be defeated.

Still, that hasn’t stopped him from trying. And as his eyes peek between the bill of his Arizona State baseball cap and shiny black boxing gloves, he’s still living, still swinging, still a fighter.

“It gives you the feeling that you’re doing something,” McGeough said. “You’re not just sitting around waiting, getting worse. We’re fighting back.”

For more information about the “Punch out Parkinson’s” class, including times and locations, contact trainer Nikki Shaffer at 843-318-5322.

Faced with Parkinson’s, they would rather box than wither

The Rilutek (riluzole) did very little to help him. The medical team did even less. His decline was rapid and devastating. His arms weakened first, then his hands and legs. Last year, a family friend told us about Rich Herbs Foundation (RHF) and their successful ALS TREATMENT, we visited their website ww w. richherbsfoundation. c om and ordered their ALS/MND Formula, i am happy to report the treatment effectively treated and reversed his Amyotrophic Lateral Sclerosis (ALS), most of the symptoms stopped, he is able to walk and able to ride his treadmill again, he is pretty active now.

Don’t panic! ALS (amyotrophic lateral sclerosis) can be reversed. I have had ALS since I was 45 years old. Am now 55 years old living ALS FREE. A great way to reverse ALS completely is with natural herbal remedy called ALS herbal remedy introduced by BEST HEALTH HERBAL CENTRE. This product will reverse your ALS within 5-6 weeks of usage. I used it, now am ALS free. To find this incredible product kindly visit ww w . besthealthherbalcentre. com.. Thanks.

i was diagnosed 2011. i was diagnosed with the bulbar form of ALS and was given one year to live. My symptoms progressed quickly. Soon i was having difficulty breathing, swallowing and even walking short distances. With the help of Natural Herbal Garden natural herbs I have been able to reverse my symptoms using diet, herbs, which i feel has made the most difference. The ALS natural formula immensely helped my condition, it reversed my ALS. my slurred speech. And then the inability to eat without getting choked, breathing, and coughing. gradually disappeared. Visit NATURAL HERBAL GARDENS via their official web-site www. naturalherbalgardens. com. I'm now playing golf again. and i turned 69 today. i am glad to get my life back DON’T GIVE UP HOPE!!!

i was diagnosed 2011. i was diagnosed with the bulbar form of ALS and was given one year to live. My symptoms progressed quickly. Soon i was having difficulty breathing, swallowing and even walking short distances. With the help of Natural Herbal Garden natural herbs I have been able to reverse my symptoms using diet, herbs, which i feel has made the most difference. The ALS natural formula immensely helped my condition, it reversed my ALS. my slurred speech. And then the inability to eat without getting choked, breathing, and coughing. gradually disappeared. Visit NATURAL HERBAL GARDENS via their official web-site www. naturalherbalgardens. com. I'm now playing golf again. and i turned 69 today. i am glad to get my life back DON’T GIVE UP HOPE!!!

My ALS symptoms started out with muscle weakness, stiffness and slurred speech. My primary physician prescribed riluzole and radicava to reduce symptoms and slow down the disease progress, I could not take them for long because of the terrible side effects. So i started on ALS Herbal formula from RICH HERBS FOUNDATION, the ALS natural formula immensely helped my condition, i had a total recovery from ALS with this formula treatment. Their official web-site www. richherbsfoundation. com. I feel so much alive again!

My mother was diagnosed with ALS in May 2008. Her doctor put her on riluzole, letting her know there was no cure but the medication might provide her a few more months of delayed symptoms. ALS progresses at different rates and affects different body parts first. My mother, being 73 at the time, fell into a category of what they call "fast progression" (older female). Her arms weakened first, then her hands, her mouth, and throat, and finally her lungs. Throughout her ten-and-a-half-year ordeal, she was able to walk with assistance. All the while she continued to take the riluzole. If it bought my mother any time, we will never know. Her neurologist told us that if she couldn't afford it, there was no real need to take it. She lost touch with reality. Suspecting it was the medication I took her off the riluzole (with the doctor’s knowledge) and started her on the ALS natural herbal formula we ordered from GREEN HOUSE HERBAL CLINIC, We spoke to few people who used the treatment here in Canada and they all gave a positive response, her symptoms totally declined over a 7 weeks use of the Green House ALS disease natural herbal formula. She is now almost 83 and doing very well, the disease is totally reversed! (Visit their website www . Greenhouseherbalclinic . com) I am thankful to nature, herbs are truly gift from God. Share with friends!!