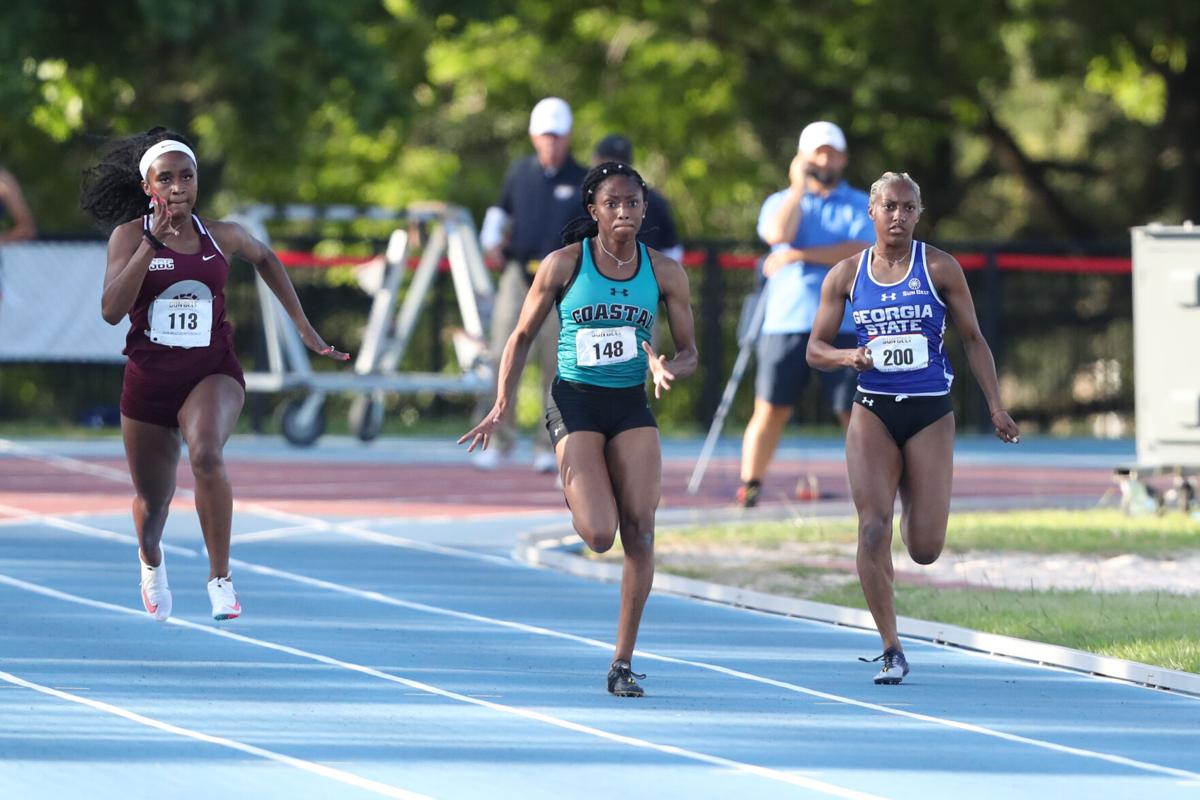 CCU sophomore Melissa Jefferson competes in the Sun Belt Track and Field Championship on May 14 in Mobile, Alabama. She will compete in the 100m and 200m at the NCAA Outdoor Track and Field National Championships in Eugene, Oregon from June 9 to June 12. Photo by Scott Donaldson and provided by Coastal Carolina athletics. 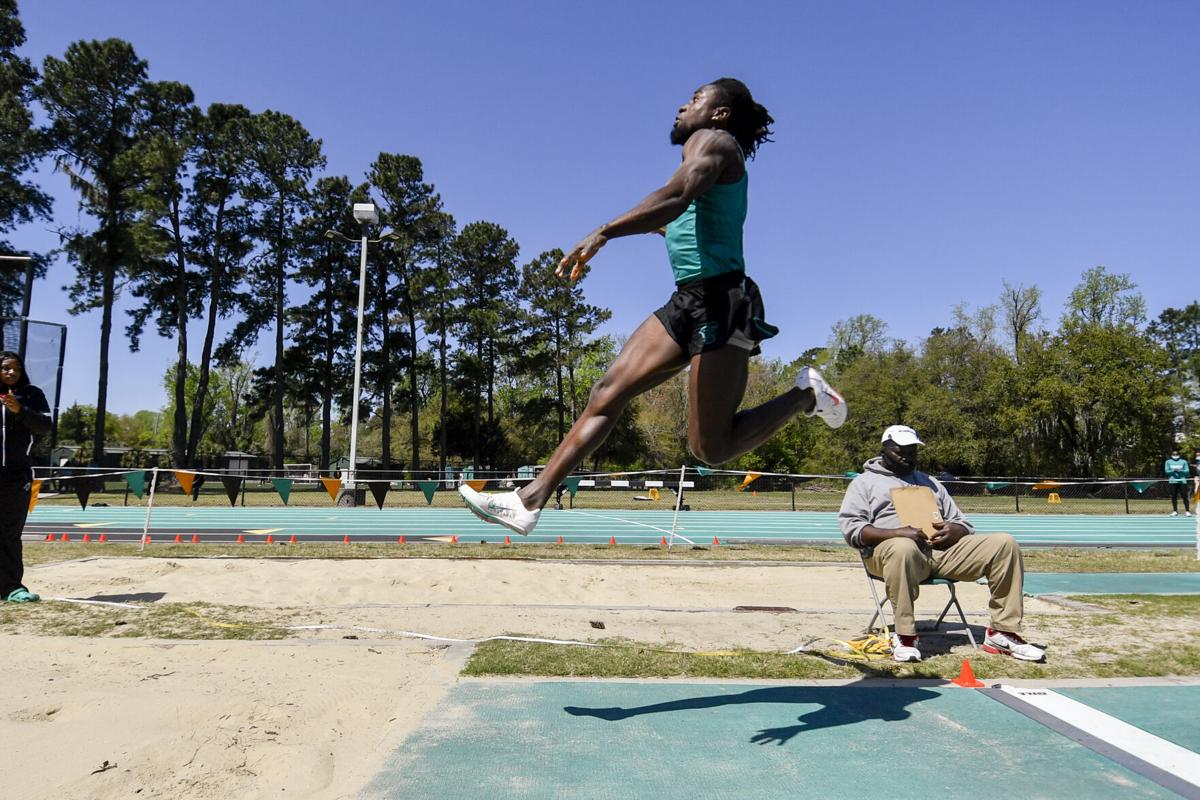 David Ejumeta will become the second ever Chanticleer to compete in the long jump at the NCAA Outdoor Track and Field Championships from June 9 to June 12. Photo provided by Coastal Carolina Athletics.

CCU sophomore Melissa Jefferson competes in the Sun Belt Track and Field Championship on May 14 in Mobile, Alabama. She will compete in the 100m and 200m at the NCAA Outdoor Track and Field National Championships in Eugene, Oregon from June 9 to June 12. Photo by Scott Donaldson and provided by Coastal Carolina athletics.

David Ejumeta will become the second ever Chanticleer to compete in the long jump at the NCAA Outdoor Track and Field Championships from June 9 to June 12. Photo provided by Coastal Carolina Athletics.

Fifth-year senior jumper David Ejumeta and sophomore sprinter Melissa Jefferson qualified for the national championships after standout performances in the 2021 NCAA Track and Field East Preliminaries during the final week of May.

Ejumeta qualified on May 26 after using his final jump to nab the final spot in the long jump, becoming the second ever Chanticleer to qualify for the national championships in the long jump competition.

The two will compete in the championships, which is scheduled for Wednesday through Saturday.

While Ejumeta and Jefferson are making strides for Teal Nation, the obstacles both athletes have had to overcome in their careers have shaped them to be the champions they are today. From season-ending injuries to family illnesses and a global pandemic, the two have pushed themselves over the hurdles placed in their lives and are now one step closer to adding to their legacies.

These are their stories.

The last two years of David Ejumeta’s career have been nothing short of a roller coaster. Following his transfer from Iowa Western Community College in 2019, Ejumeta tore his Achilles, forcing him to miss his junior season in 2019. During the road to recovery, Ejumeta faced another hurdle: depression.

“I had heard so many stories when I was down,” Ejumeta recalled. “When you’re down like that, you start hearing negative stories about Achilles [injuries]. You hear people say ‘oh, I know someone who had Achilles surgery and was done.’ Every single time, that is what I was hearing.”

It was following that surgery that graduate assistant coach Karl Goodman met Ejumeta. Goodman said Ejumeta was in his worst state when the two first met.

“He was depressed. He was not in shape at all,” Goodman said. “I said we got to get to work because you’re not looking good right now athletically.”

Along with Ejumeta’s jump coach and teammates, Goodman, who specializes with CCU’s sprinters, helped Ejumeta get back on track. Ejumeta said that the teammates and coaching staff that he has surrounded himself with is family.

“They encouraged me,” Ejumeta said.

Ejumeta also added that he was grateful for God when it came to battling obstacles that were placed in front of him these past two years.

“If it wasn’t for God, I don’t know if I would be competing,” Ejumeta said.

That work ethic Ejumeta has and overcoming the adversity he’s faced has helped Ejumenta become one of the more well-respected members of the team.

“He’s another guy that athletes look to across the team because of his dedication and the little things that he does so well,” Goodman said. “People look at him and are like, ‘Man, that’s impressive.’”

For Ejumeta, the opportunity ahead of him in being just the second long jumper in Coastal Carolina's history to make it to nationals is something he could only describe as a blessing.

“I just wake up day by day and see how it plays,” Ejumeta said. “I just try and be dedicated, listen to the coaches.

“Coming from an Achilles injury to this moment, I’m just zoned in,” Ejumeta said.

When his moment comes on Wednesday in Eugene, Ejumeta will be ready.

“We’ve done everything we’ve had to do to get to this point,” Ejumeta said. “The thing we have to do now is tweak the muscles and make the muscles more reactive and more explosive.”

Ejumeta will begin his long jump event at 9:30 p.m. Eastern Time on Wednesday.

Following an impressive 2020 Indoor Track and Field season that saw sophomore Melissa Jefferson pick up the 2020 Sun Belt Newcomer of the Year and Freshman of the Year, Jefferson continued her dominance and showed why she is not just one of the best in the Sun Belt, but in the entire country.

“It’s very rare that an athlete can double,” Goodman said.

Goodman said that he had originally planned to pull her from the 200m in the regional meet. Then came Jefferson’s performance in the Sun Belt Championship meet.

“She ran the tenth best time in the country so it was like ‘Well, now I have to put her in.’ That was really impressive,” Goodman said.

Her work ethic and what she brings overall to the team makes her “an invaluable member of Coastal Carolina athletics.”

“She has an energy and a smile which is contagious,” Goodman said. “She has a work ethic that has rubbed off on not just the women but the men on the team.”

During the indoor track and field season, Jefferson came in second in both the 60m and the 200m and it was at that point that Goodman saw the unlimited potential within Jefferson.

“After that, that was when I found out who Melissa Jefferson was,” Goodman said.

Jefferson pushed herself to become not just the 2021 Sun Belt Newcomer of the Year for Outdoor Track and Field but also picked up Most Outstanding Track Athlete (Outdoor) and Most Outstanding Freshman (Outdoor).

But before she was breaking records and putting on for her college, she was a student-athlete at Carvers Bay High School in Georgetown. Jefferson made a name for herself on the track in Class 2A Track and Field, placing 2nd in the 200m in 2017, 2018 and 2019. In her sophomore year in 2017, she finished fourth in the 100m. The following year she jumped up to second before finally capturing the state title during her senior year in 2019.

While she was racking up records and bringing home medals, Jefferson was making an impact within her own home. In early 2018, Jefferson’s father Melvin was diagnosed with myelodysplastic syndrome (MDS), a blood disorder where the body cannot make healthy red blood cells in the bone marrow and can possibly lead to leukemia.

Once the diagnosis became known, the search was on for donors in an effort to combat the disorder. Despite coming close numerous times, the right donor seemed to elude Jefferson’s father. Doctors started testing family members but since Jefferson was underage at the time, she couldn’t be tested unless a parent gave consent. After half-matches being found in Melvin Jefferson’s sister and two other daughters, Melissa was able to get parent consent and found out that she was a preferred match.

From there, the testing began.

“They drew a lot of blood,” Jefferson said.

After two days of testing, Jefferson returned home. However, with her mother being her father’s caregiver during this process, her parents stayed in Charleston for 100 days while her father received treatment.

“It was worth it,” Jefferson said.

The ordeal that she and her family had to go through taught Jefferson that the opportunity that is right in front of her with nationals “shouldn’t be taken for granted.”

“To say that I am here today, about to go to Oregon and compete for nationals, you couldn’t tell me two years ago that this is where I would be right now,” Jefferson said. “At that point in time, it was all about making sure my dad was okay because it was a point in time where things could have gotten really, really bad for him. He possibly wouldn’t have been here today and that is enough to keep me going.”

Going into the week’s competition, Jefferson is “living in the moment.”

“It’s a blessing to make it this far,” Jefferson said. “I don’t want to overthink the process of the moment. I’m just trying to stay calm about it. I’m excited.”

Jefferson will begin her quest to gold a day after Ejumeta’s event with the 100m event taking place at 7:46 p.m. Eastern time and the 200m happening at 8:44 Eastern on Thursday.