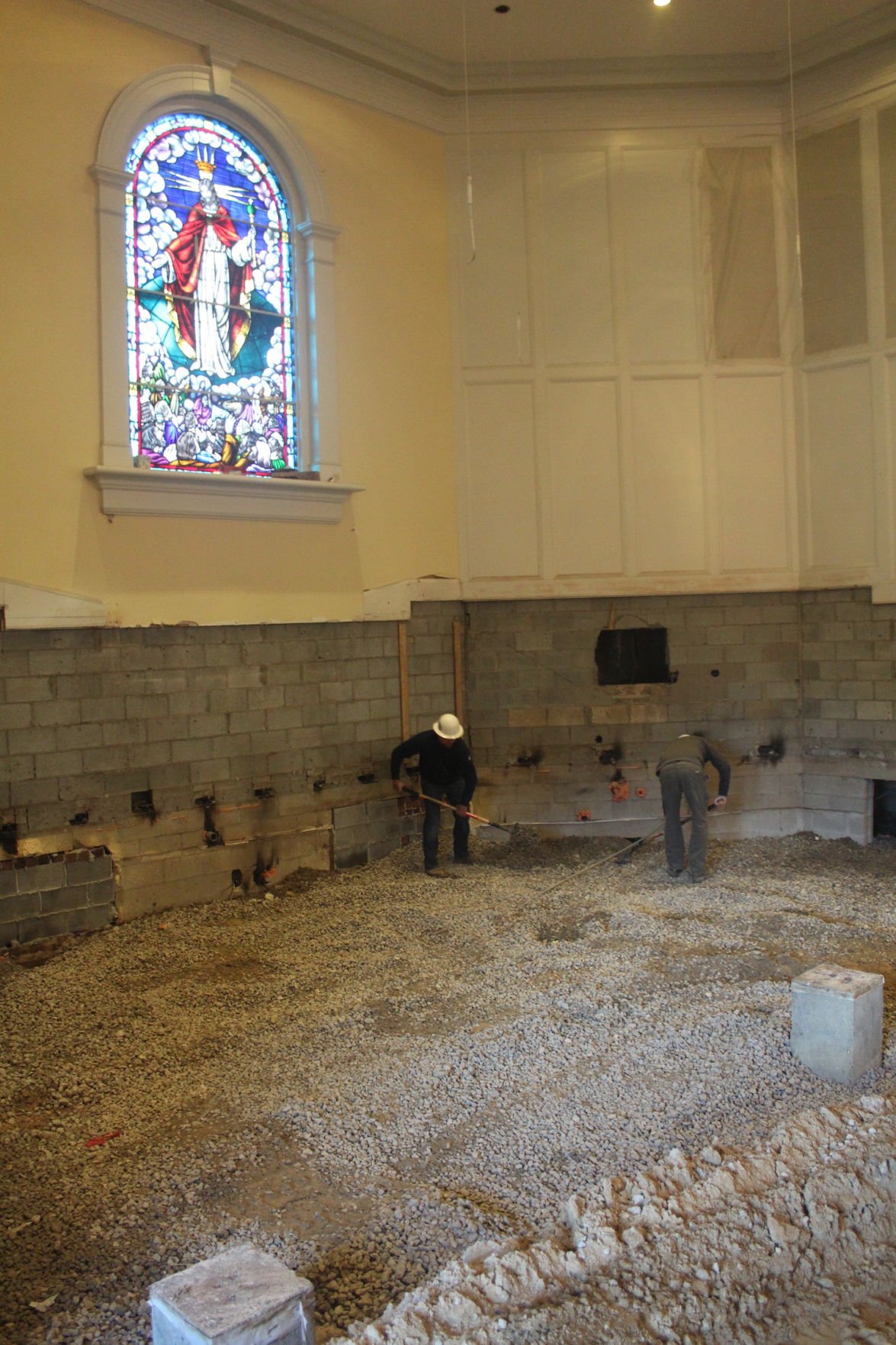 Workers begin the task of filling in the previous crawlspace to build up the floor level to above the flood line. 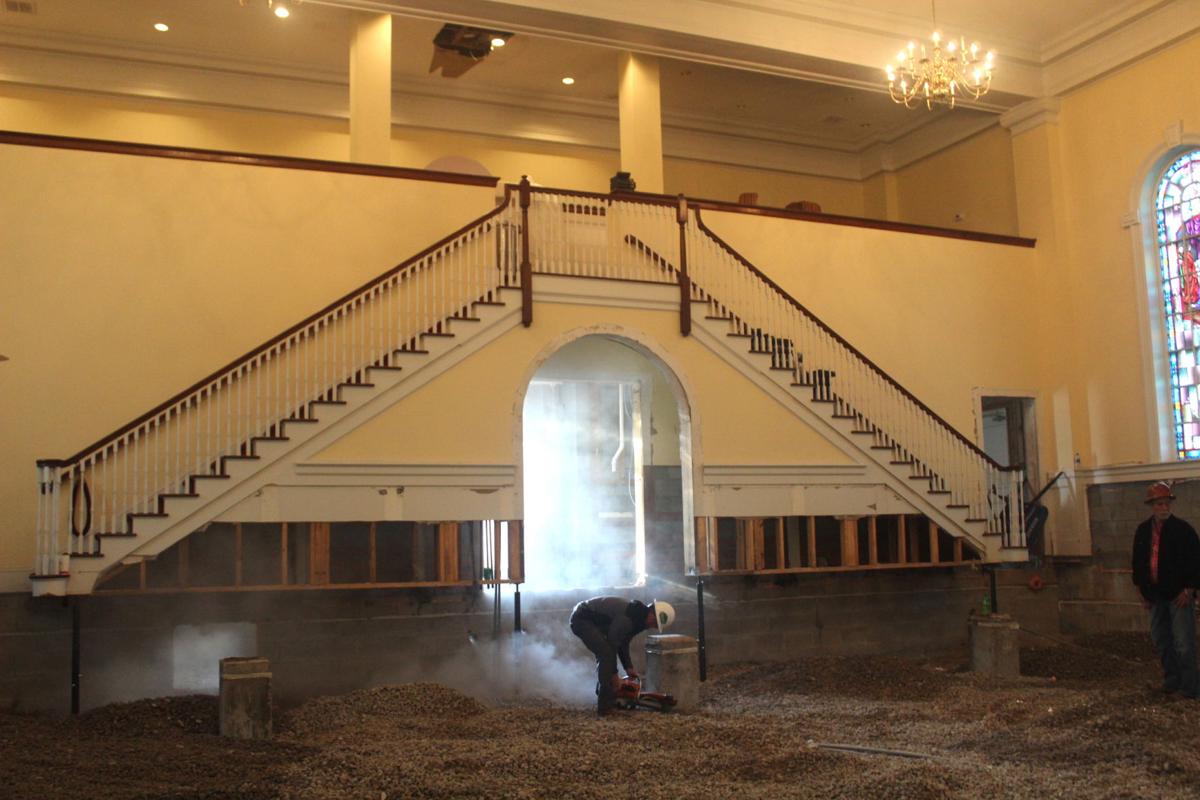 A worker removes a pylon to make room for equipment to come and fill the sanctuary floor with gravel, sand, and cement to raise it to above flood level.

Workers begin the task of filling in the previous crawlspace to build up the floor level to above the flood line.

A worker removes a pylon to make room for equipment to come and fill the sanctuary floor with gravel, sand, and cement to raise it to above flood level.

One iconic image from Hurricane Florence will live in the memories of Conwayites for decades to come.

That’s the image of Trinity United Methodist Church totally engulfed in enough water for people to paddle kayaks across the front yard and around the building.

“We were absolutely heartbroken when it flooded,” said longtime member Saundra Palmer. “I look at it now and wonder how all that water was there, it was an enormous amount of water.”

But a year has passed and things have changed. By mid-year 2020, TUMC hopes to open back up to its congregation and the community, with its Sherwood Drive campus buildings much more resistant to future flooding.

As for the repairs and reconstruction beginning, Palmer said she heard what the plans were and hopes for the best.

“I just have to trust that they know what they are doing,” she said.

Member Sid Blackwelder said that after the flooding, at first everyone [the congregation] felt really down.

“We’ve been through flooding before…but this last flood was devastating,” Blackwelder said.

He is confident in the work being done on his church.

“You know what though? This is going to be a blessing for our church,” Blackwelder said. “We are going to fix what was damaged, and make it even better than it was before. Trinity will come out of this stronger than ever.”

Although work has already begun on the church’s restoration, it hasn’t been decided yet exactly what all will be included in the final plan.

Part of their wishes are to add a Family Life Center that would include a gym facility and small basketball court, a big multiuse room, small dining area and a commercial-type kitchen with restrooms and storage, according to the building committee chairman Dale Grunsky.

“That area is under question, and how much debt the church wants to take on to be able to build that structure. FEMA would not be doing it,” he said.

Plans are still being submitted to FEMA for approval, so construction costs aren’t known just yet. Chancel Builders was hired as the “construction manager at risk”, Grunsky said, which means that they helped TUMC during the planning stage and in determining exactly the best method to do the reconstruction.

“They’re on our side, helping us determine what is best, and the least cost method of doing it,” Grunsky said.

Once that is determined, he said, they will arrive at a price to do the construction and that will be a guaranteed maximum price.

“At that point they become the general contractor,” Grunsky said.

Pastor Kim Strong said the church, with a membership roll of 750, has an average weekly attendance of around 220-250. The congregation has been meeting at Conway Christian School since the flood.

About 90 percent of the congregation has hung in there during the transition time, he said.

A congregational meeting will be held the week following Thanksgiving to decide exactly what will be included in the church’s final campus. The congregation will have a series of informational meetings in a smaller setting to help give them all the details needed to make an informed decision about the buildings so they’ll be ready to vote on Dec. 8.

“We’re going to bring the sanctuary up, raise the floor to above the flood level,” Grunsky said.

The original floor, he said, was on bar joists and plywood with a crawlspace.

“It was really a swimming pool during the storm,” he said.

The sanctuary was stripped wall to wall, and it will be filled with dirt, then a level concrete floor poured, including a chancel area that will be almost two feet above that. The previous sanctuary had a bit of a slope to it, he said, but this will be a flat platform with a ramp up to it.

“A little more modern look than it was before,” Grunsky said.

The Education Building that was awash with three feet of water from Hurricane Florence, has a second story with load-bearing walls, so the building physically couldn’t be raised.

Grunsky said they are waterproofing the exterior walls up to the floodline.

“It’s waterproofing that you roll onto the wall and it sets up like a membrane,” Grunsky said. “To protect that, we’ll put a new brick wainscoting up just above the material.”

The exterior doors will be raised to above flood level.

“You’ll actually walk up to a platform, go into the building on a platform and walk down steps to the first floor, or up steps to the second floor,” he said.

Between the Education Building and the sanctuary on the front of the building, they hope to build what they are calling a “concourse” area, which will be an open space, “meeting and greeting” type of area with a coffee bar, as well as a new office area, two restrooms, a new nursery area and an elevator, including ADA access to the building.

Strong said they are looking at getting back into the buildings in a timely fashion, and providing flood mitigation to prevent things from happening again.

“We decided to stay in that location, with a long history of flooding and the floods had gotten worse and worse as time has gone on,” Strong said. “The local folks seem to think the building and housing going on in that area has taken away from potential draining areas for the Crabtree Swamp. We expect with more building that future floods will be worse.”

Strong said they hope to be finished with the reconstruction before next hurricane season begins.

He also said a wall will be constructed around the back of the property in addition to the other building modifications that they hope will prevent future flooding.

“We’re also have a different drainage system put in…we can’t keep the area from flooding, all we can do is keep the buildings from flooding,” Strong said.

Grunsky said they have been working with the Federal Emergency Management Agency (FEMA) since a month after the storm hit.

They worked with FEMA to determine a value of each one of the buildings in terms of the cost to put it back to preflood condition, as well as the cost to bring it up to building codes and to make it ADA-compatible. They also factored in the contents damaged inside the buildings.

Grunsky said they also had to go through a mitigation process regarding what it would take to keep the same catastrophe from happening again. FEMA transfers its donation to the S.C. Emergency Management Division, who processes the funds to TUMC and oversees repairs, Grunsky said.

Including a Family Life Center would require the church to go into some debt. After that meeting, more will be known about what financial situation TUMC will be facing in 2020.

On multiple occasions, Horry County Council and North Myrtle Beach City Council have convened secret emergency meetings to approve policies in response to the coronavirus outbreak. Local officials insist there is nothing wrong with such secrecy, but their actions stand in stark contrast to what Myrtle Beach City Council and Conway City Council have done. Those councils announced their emergency meetings and allowed the public to listen to council members' discussions. Should local governments be holding secret meetings?

EARN $100 BY SHARING YOUR OPINION BY PHONE.