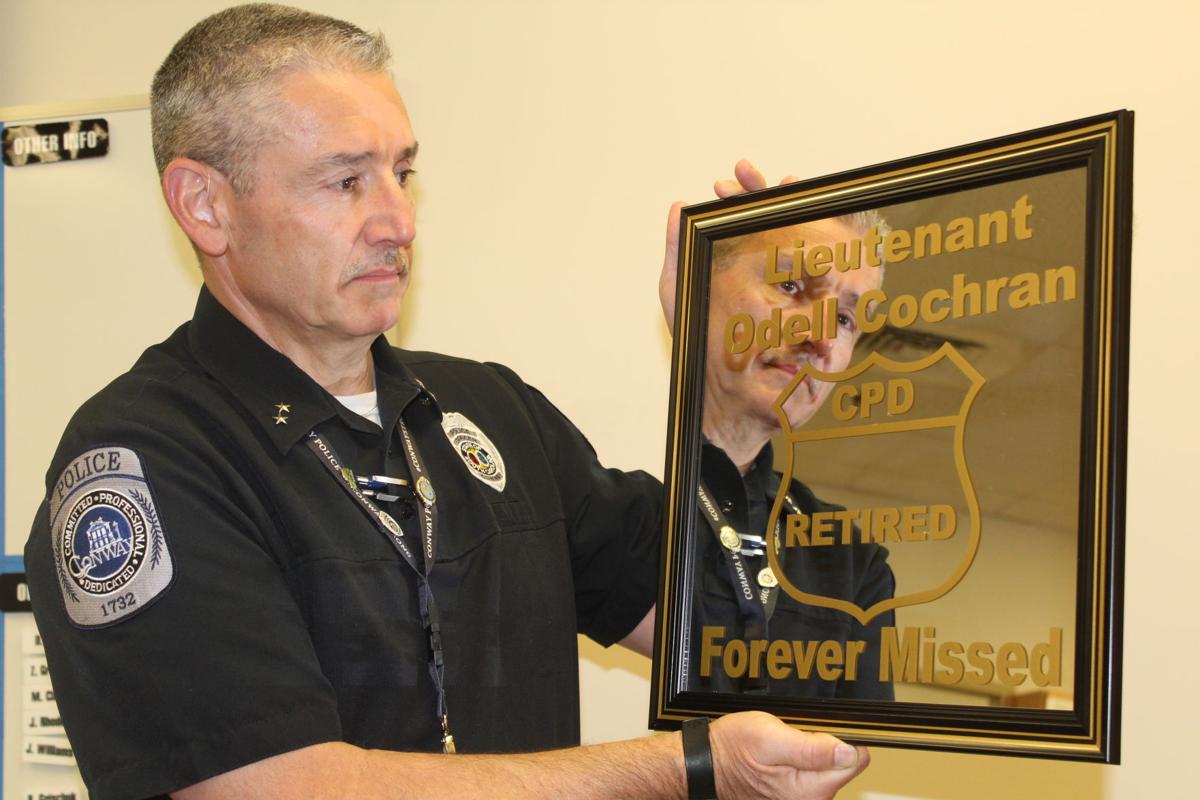 Conway Police Chief Dale Long put this plaque in his department’s briefing room as still another way for the department to honor and remember slain police lieutenant Odell Cochran. 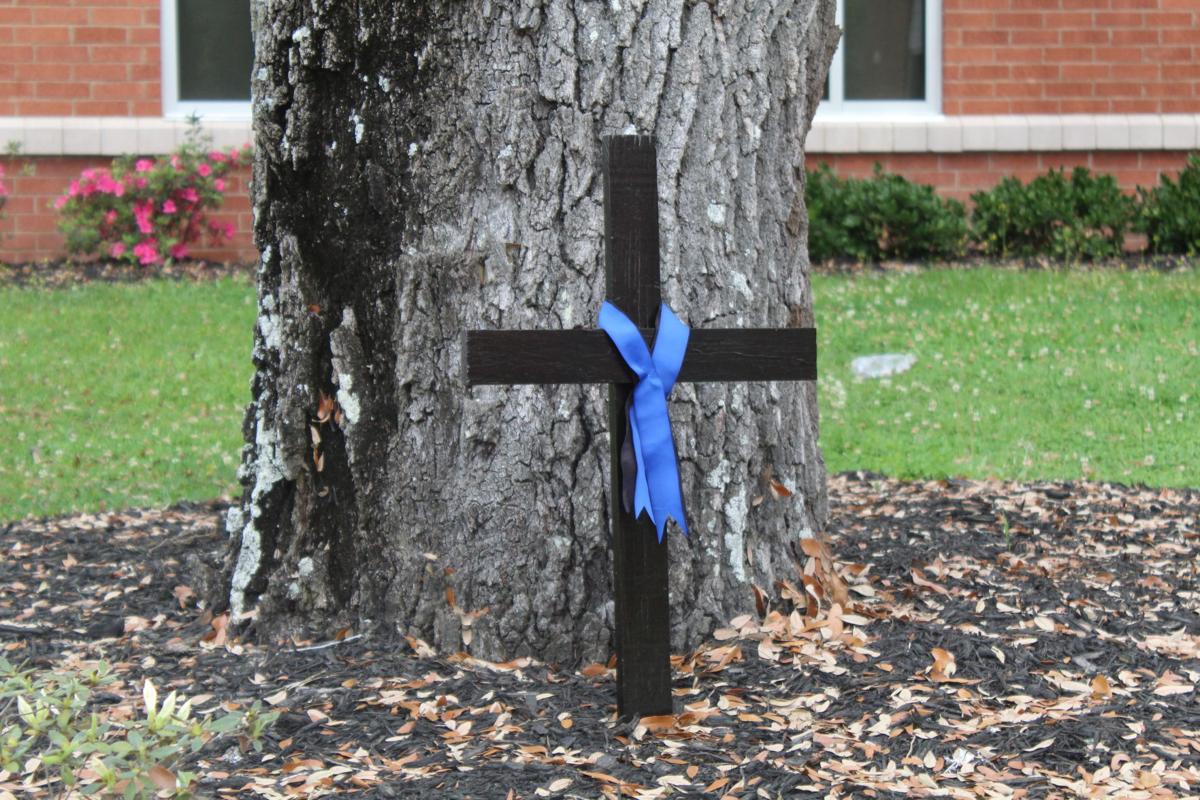 Friends and family of Odell Cochran placed this cross in front of Conway’s Public Safety building in memory of the 38-year veteran of the CPD. They are all anxious for police to find the person wanted in connection with Cochran’s death.

Conway Police Chief Dale Long put this plaque in his department’s briefing room as still another way for the department to honor and remember slain police lieutenant Odell Cochran.

Friends and family of Odell Cochran placed this cross in front of Conway’s Public Safety building in memory of the 38-year veteran of the CPD. They are all anxious for police to find the person wanted in connection with Cochran’s death.

The cross was placed there by members of the community, who wanted to use it to help people remember slain police lieutenant Odell Cochran.

It isn’t the only thing in the building that has become a shrine of sorts to Cochran and his memory. There’s a portrait of him in the lobby directly under the City of Conway seal, a mirror in a briefing room that bears the words Lieutenant Odell Cochran and, in a police shield the words, CPD retired, and below that, Forever missed.

On a table in the same room are newspaper clippings from as far back as 1979 when, after only one year with the department, and at age 24, Cochran was named the Police Officer of the Year, another marked his promotion to patrolman first class, and there are pictures of him all along his 38-year career with the Conway Police Department. In 2020, he was named the City of Conway’s Public Safety Employee of the Year.

Not only members of the department, but also his family and the entire community were stunned March 5 when Cochran was killed.

Now that the shock is beginning to fade, the pain is digging in, and knowing that the person who is being sought in connection with his death hasn’t been caught is making things even worse. Conway Police Chief Dale Long also worries that the coronavirus scare has taken attention away from this issue.

“We’re kind of victims as well because we’ve lost somebody…We want to see that closure as well,” Long said.

People who worked with Cochran say he got along with people from all socioeconomic levels from legislators to public housing residents. They all knew that he cared about them and wasn’t there just to arrest or scold them, he was there to help them and to work out their problems, according to Long.

His influence went far beyond his police duties because he worked part-time painting houses for people all over the area.

“I loved Odell. He was kind of like a father figure and his name always resonated with me because by grandfather was an Odell,” she said.

Todd says it was a big enough shock to have Cochran gone, but the manner in which he was taken from them is “just unbearable.”

She said he was the only person she knew who could get away with wearing overalls and look as adorable as her children did when they were young and wore them. But when he was in uniform, he was always square, she said, professional to a T and always with shoes properly shined.

His office was right across the hall from hers and that made it easy for her to walk over and ask him all of her questions, and he always helped, she said.

In her early days as an officer, he taught her how to direct traffic, and traveling to and from their traffic assignments they often stopped for a snack.

“I keep his funeral program in my car just so we don’t forget because the virus has kind of put things on the back burner. We don’t want anybody to forget about him,” Todd said.

CPD victims advocate Gloria Wilson worked with Cochran at the police department, but knew him even before that when she worked for S.C. Probation, Parole and Pardon Services. She always found him jovial, inviting and approachable.

While she was at SCPPP, she said, he often wanted to know how things were going and offered the assistance of Conway police.

“I always felt if I needed his assistance for any matter…I felt he would be more than willing to assist,” she said.

Theresa Tyler, executive assistant at the CPD, knew Cochran for 42 years. She said he played the role of brother to her.

“The part that bothers me is now we’ve got to offer a reward for somebody who’s done so much for the community,” she said.

It’s been hard for Tyler to believe that someone might want to harm her friend.

“Anything I needed done, he would do it for me,” she said.

Tyler said Cochran’s family had t-shirts printed with Cochran’s picture on them.

Every Friday when they have dress-down day at the CPS, she wears hers.

Faulk has a previous charge of weapons/carrying or displaying firearms in a public building or adjacent area from Orangeburg County dating back to October of 2019. He was released from jail on a $3,500 cash bond. He was scheduled to appear in court Jan. 10, 2020, but Orangeburg court records show that he failed to appear.

He has been found guilty in his absence in Conway Municipal Court for minor in possession of beer and wine; in Horry County Magistrate’s Court for breach/obtaining signature or property under false pretenses and receiving stolen goods; and in North Myrtle Beach Municipal Court for third-degree assault and battery and larceny.

The Bureau of Alcohol Tobacco and Firearms has offered a $5,000 reward for information about Faulk’s whereabouts. The City of Conway added $1,000 to that and the ATF was expected to add even more this week.

Long is quick to point out that this is not a city police case. Cochran died in Horry County’s jurisdiction and that agency is working the case.

“We’re interested in following this as closely as we can,” the Conway chief said. “We’re not going to overstep our boundaries.”

In other words his officers won’t be interfering in the investigation; they just want people not to forget Cochran.

Editor's note: This story was written just before Faulk was taken into custody in Green Sea Wednesday.