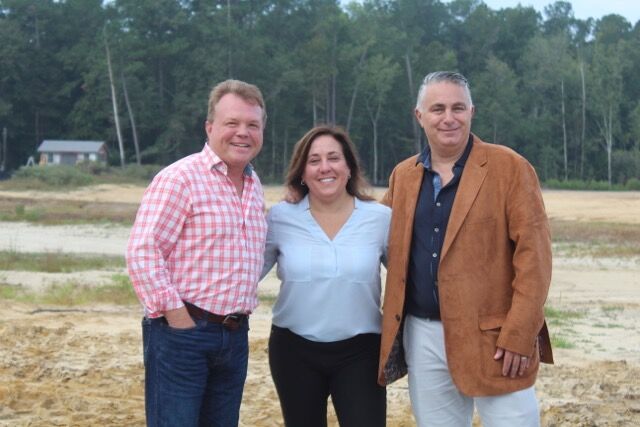 Builder Jimmy Edwards and Skutchi Designs owners, Jamie and Joe Ferraro, announced the expansion and planned move to Conway of the office furniture manufacturing plant. The business was celebrated at a groundbreaking ceremony Wednesday morning. 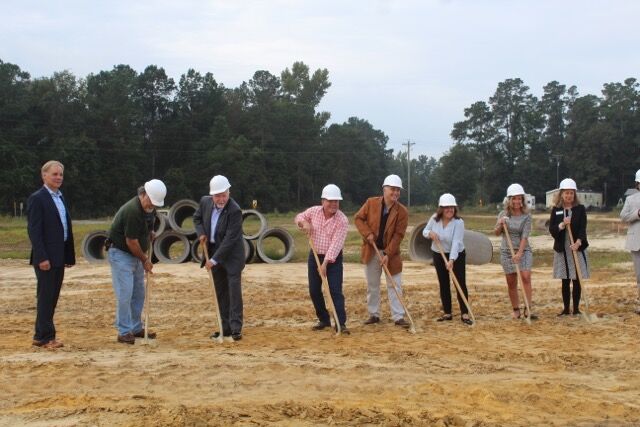 Owners and dignitaries turned shovels of dirt as they announce the planned move of Skutchi Designs to the Ascott Valley Industrial Park on the Adrian Highway.

Builder Jimmy Edwards and Skutchi Designs owners, Jamie and Joe Ferraro, announced the expansion and planned move to Conway of the office furniture manufacturing plant. The business was celebrated at a groundbreaking ceremony Wednesday morning.

Owners and dignitaries turned shovels of dirt as they announce the planned move of Skutchi Designs to the Ascott Valley Industrial Park on the Adrian Highway.

Justin Stanley began working at an entry-level job for Skutchi Designs in Carolina Forest about eight years ago.

Since then he’s worked his way up to being the shop manager.

It’s a good company filled throughout with good people, he said, adding that he likes everybody there.

“They’re really dedicated to their work, everybody, but especially the Ferraros,” he said.

Warehouse manger Tim Purkey agreed, “I love my job. The employees are all great…It's a fast-paced job, but we get done everyday. We’re never late on anything.”

He says they pride themselves on having a quick turnaround.

Actually, that’s what Wednesday’s gathering at the Ascott Valley Industrial Park, under construction on Adrian Highway at the location of the old Conway Mill, was all about.

Five parcels have been sold at the new park; four of them to the same company, B&B Cranes.

Skutchi owner Jamie Ferraro expects construction on the new 60,000-square-foot building to begin in November and be complete by November of 2022 representing a total investment of about $3 million.

Skutchi Designs crafts office furniture. They offer cubicles, conference tables and modular wall panels that can be configured and reconfigured by office workers to be used the exact way they want. They sell to governments, universities, schools, corporations and smaller customers. In the new facility, they plan to add millwork.

The business began in 2005 in New York, but moved to Carolina Forest 13 years ago. The problem now is a good one; they’ve been so successful they need more room and more employees.

Mrs. Ferraro says the company has been working with 23 employees. They had planned to add 41 more when they move, but they’ve already added a few of those.

The Ferraros started working toward a larger facility about three years ago, but have been held up waiting for the new park to be ready.

Joe Ferraro admits that he has been persistent in his push for the new location.

Johnny Vaught, who represents District 8 on the council, lamented that Skutchi Designs is located now in his district, but will be in District 10, represented by Danny Hardee, when it moves.

Still, he said, “I’m glad to see the growth, I really am. We’ve been wanting to see things happen out here for a very long time…There’s so much good land out here that’s getting away from small farmers.”

He also mentioned Gov. Henry McMaster’s recent proclamation that the money for I-73 might be on the way.

“It’ll come right by here and that will help you grow out tremendously,” he said.

He also talked about how important it is for Horry County’s economy to become more diversified, so there’s not so much dependence on the tourist industry that can be strangled in a minute by severe weather.

Berry said there are not many problems that jobs can’t positively impact. He mentioned food, poverty, education and healthcare.

The good things jobs develop are pride, identity and hope, he said.

It was also pointed out that the salaries at Skutchi Designs are above the area average and the company provides health insurance.

Joe Ferraro said they are excited to bring more people into their company, and he’s pleased that they offer good paying jobs.

Stanley, the shop manager, and the other employees are excited about the move.

“It’s going to be a change, definitely a change, but hopefully a change for the better,” he said. “I’m sure we can handle it. We need the space. We really do.”