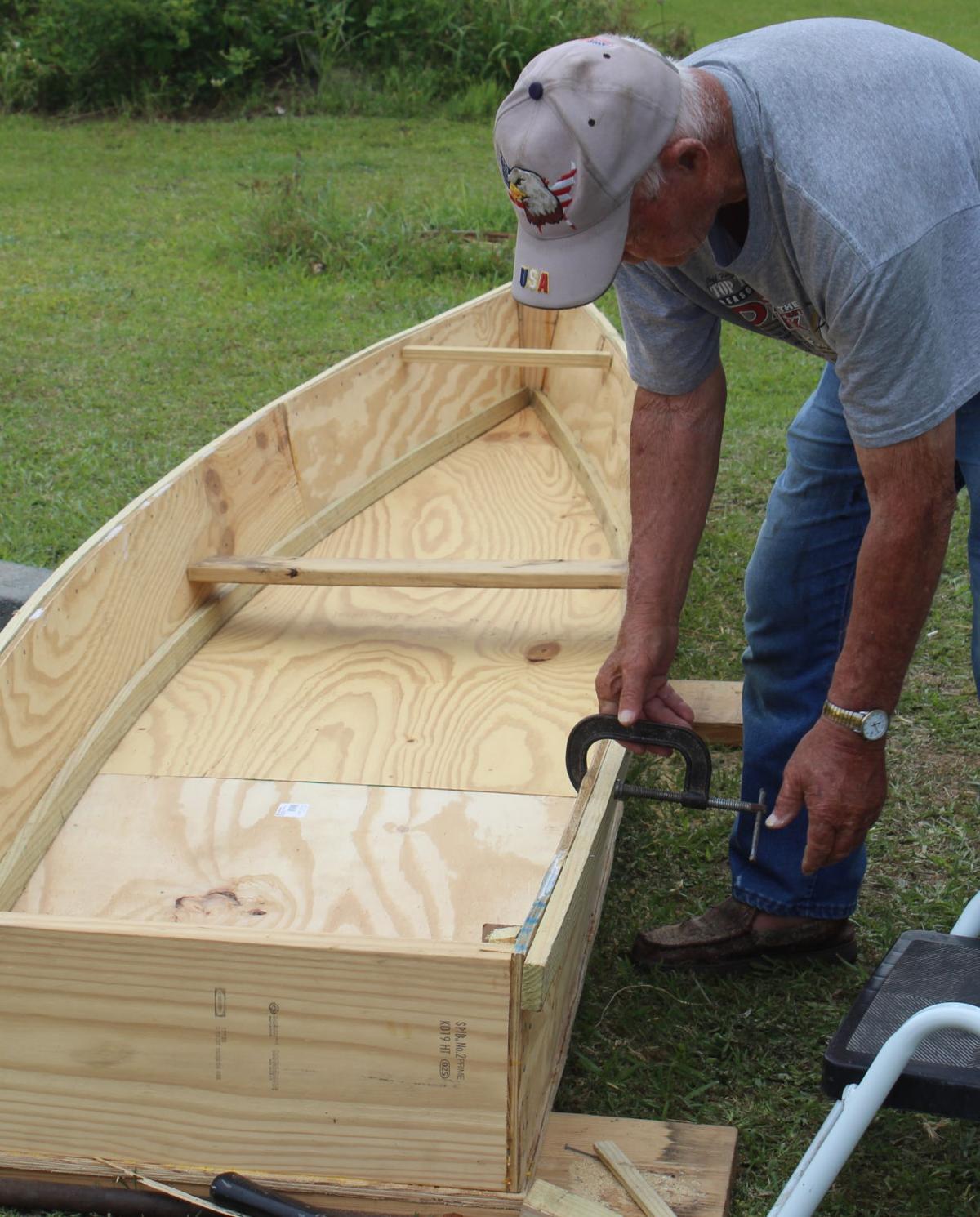 Henry Roberts demonstrates how he got his boat into the right shape. He hopes to catch lots of fish when his boat is ready. 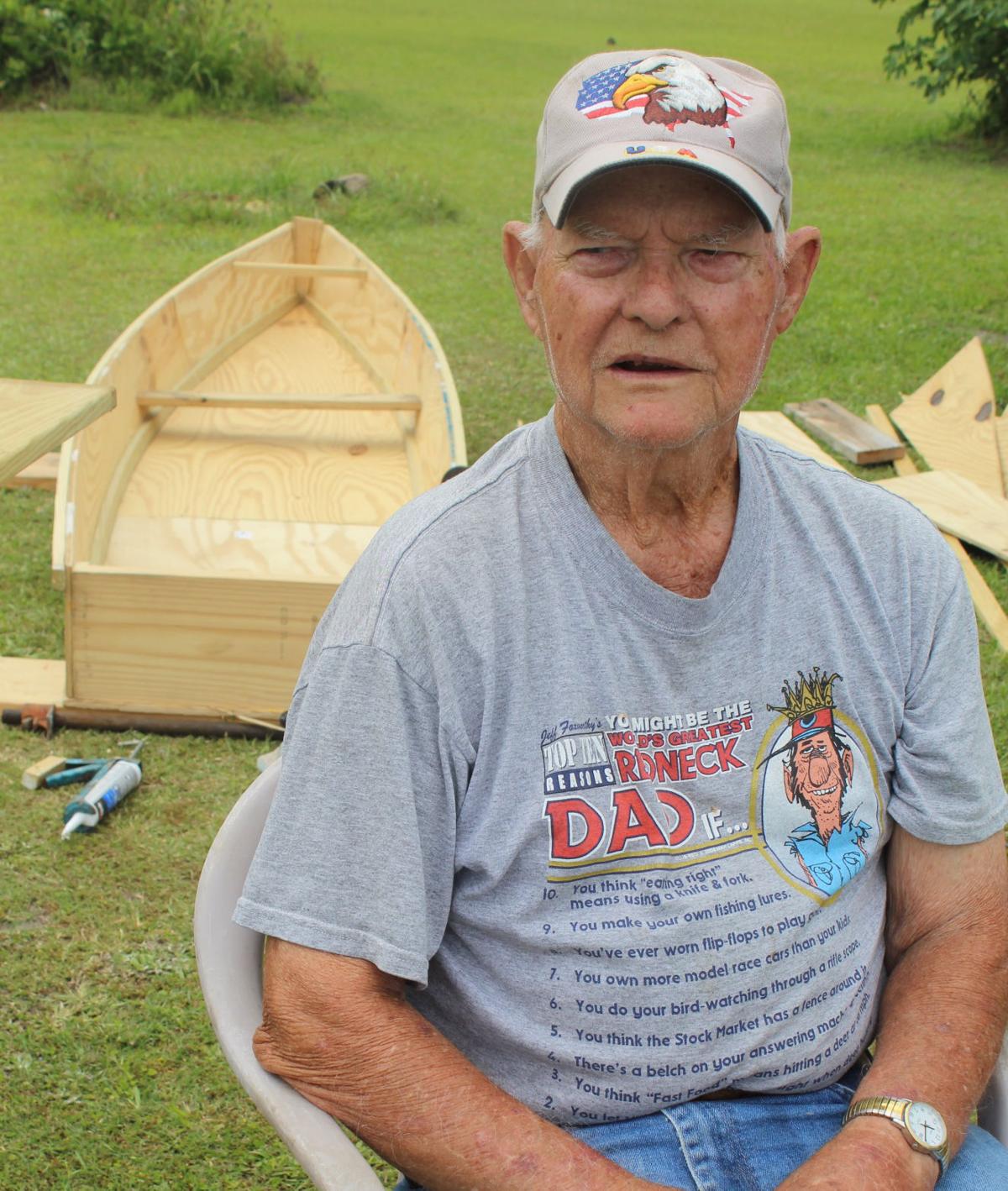 88-year-old Henry Roberts takes a break from his work on a fishing boat that he is building in his yard.

Henry Roberts demonstrates how he got his boat into the right shape. He hopes to catch lots of fish when his boat is ready.

88-year-old Henry Roberts takes a break from his work on a fishing boat that he is building in his yard.

Common sense: That’s all it takes to build your own 12-foot fishing boat, according to 88-year-old Henry Roberts, who has one in his yard now almost ready to launch.

Although Roberts has built two or three boats in the past, he had no immediate plans to build another one, but when someone took his Warrior, one-man boat, motor and all, from his yard, he was pressed back into action.

He uses his boat for fishing only, and likes best to launch in the Little Pee Dee River at Huggins Landing near Galivants Ferry. Bream are the Conway native’s primary target.

“The best handling boat that I’ve ever had was the one that I built myself 50 years ago, and I’m trying to build this just like that one,” he said. “I just love to fish. I’ve always loved to fish all my life, and hunt until I got so old I was afraid to go into the woods by myself,” he said.

Roberts says it’s hard to find a one-man factory-built boat these days. Primarily what he’s found in stores are kayaks that he declared not good for fishing.

He prefers to fish alone.

“I like to get down the river where it’s quiet, right by myself and enjoy my fishing,” he said.

Roberts’ three daughters, who all live close by, are not big fans of his fishing alone.

When he talks about building his boat, Roberts always returns to simplicity and common sense.

“Well, you just figure out what you need to make it, go get that material and start working with it. You got to make up your mind what kind of boat you want and just go from there,” he said.

Building isn’t foreign to Roberts, who, in 1973, built by himself the home he lives in now. He said he did it all – plumbing, electricity, everything – but he points out that rules about building are different now than they were then.

He retired at age 62 from New South Lumber Company, where he worked as a saw filer keeping the saws sharp.

“Lord, I’ve been cut. You couldn’t stick a pin in my hand or thumb without sticking it in a place I’ve been cut,” he said. “There are a lot of people who file saws that have lost a finger. I’m lucky that I’ve still got all mine. They got some scars, but I’ve still got them all.”

He spent 45 years working at sawmills.

“…and when I got 62, I figured I was pretty well set for retirement and I said, ‘well when I retire I can fish and hunt and do what I want to do,’” he said.

After he retired, he stuck around his home about two weeks completing all the odd jobs that needed doing. After sitting down with nothing to do for a short time, he told his wife that had to change.

About being idle, he said, “That was the hardest thing I ever tried to do.”

He was back in action when he got a part-time job with the Hadwin White automobile dealership near Myrtle Beach picking up and returning cars that needed repairs.

Then, also with Hadwin White, he began picking up and delivering cars all over South and North Carolina, Florida and Georgia and he even went as far as Virginia and West Virginia once or twice.

“I’ve been all over the place. I enjoyed it. It give me something to do and I enjoyed what I was doing,” he said.

Even after his years at New South, Roberts declares that he’s not a carpenter.

“When you start building something, a boat or a house or anything, you just have to use a little common sense. Go step by step, it’ll all come out somehow,” he said.

When he was younger it took him about two to three days to build a boat, but he estimated he’d need about a week and a half to finish his present project.

His problem now is a pain in his leg that doctors think is caused by a nerve in his back. He’s tried shots in his back and is now considering surgery to fix the problem.

After about two hours of work this past Friday, he announced, “It’s time for me to sit down and rest a while.”

He works a while, rests a while, then works more and rests more.

He is building his boat on the ground elevated only by a few boards.

“I crawl around and sit around here and yonder, until I get things working,” he said.

His daughter Sandra Lewis, who lives right beside him, helps take care of him.

“I can’t do anything with him,” she said. “He’s hardheaded.”

She says he waits until she leaves home before he heads into his yard and his boatbuilding project.

“When he does something he goes full force, can’t slow him down,” she said.

After pondering a little more, she said, “He’ll usually do what I tell him to do.”

One thing he likes to do is eat Sunday dinner at her house because she cooks like her mom used to.

“I can tell you dad’s secret. He loves anything green – collards, cabbage – and he could eat fish three times a day, so I reckon he deserves his boat,” she said.