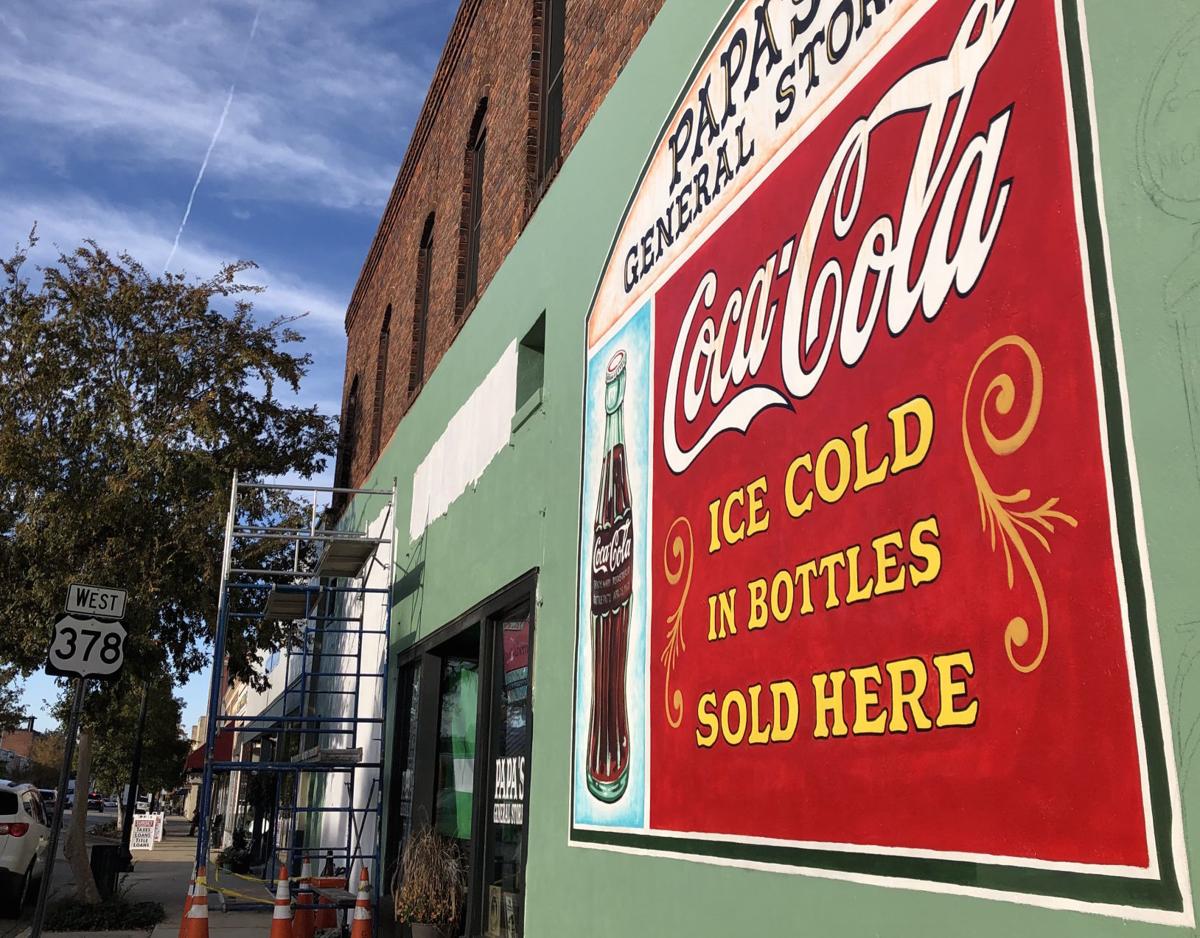 The same artist that painted the mural on the wall in the new Kingston Park is busy painting this mural on the side of Papa's General Store. 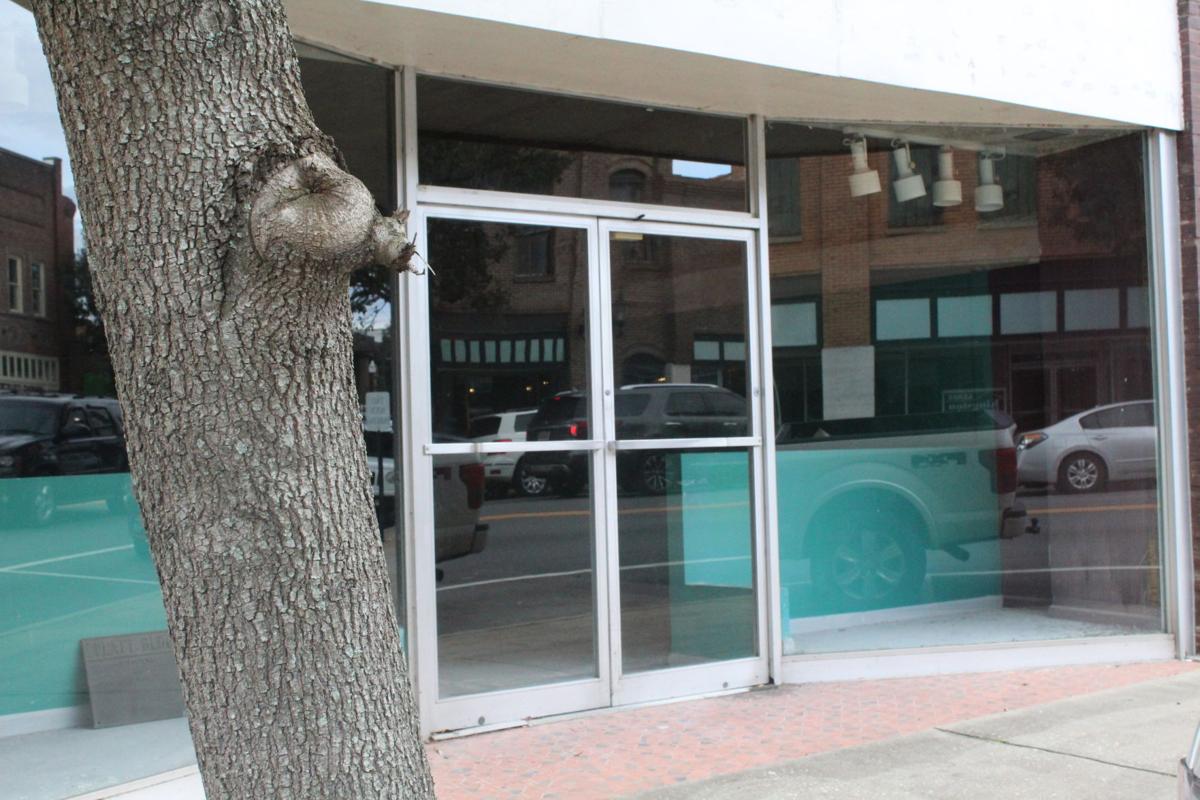 This vacant building at 317 Main Street has been purchased and is slated for renovations soon. 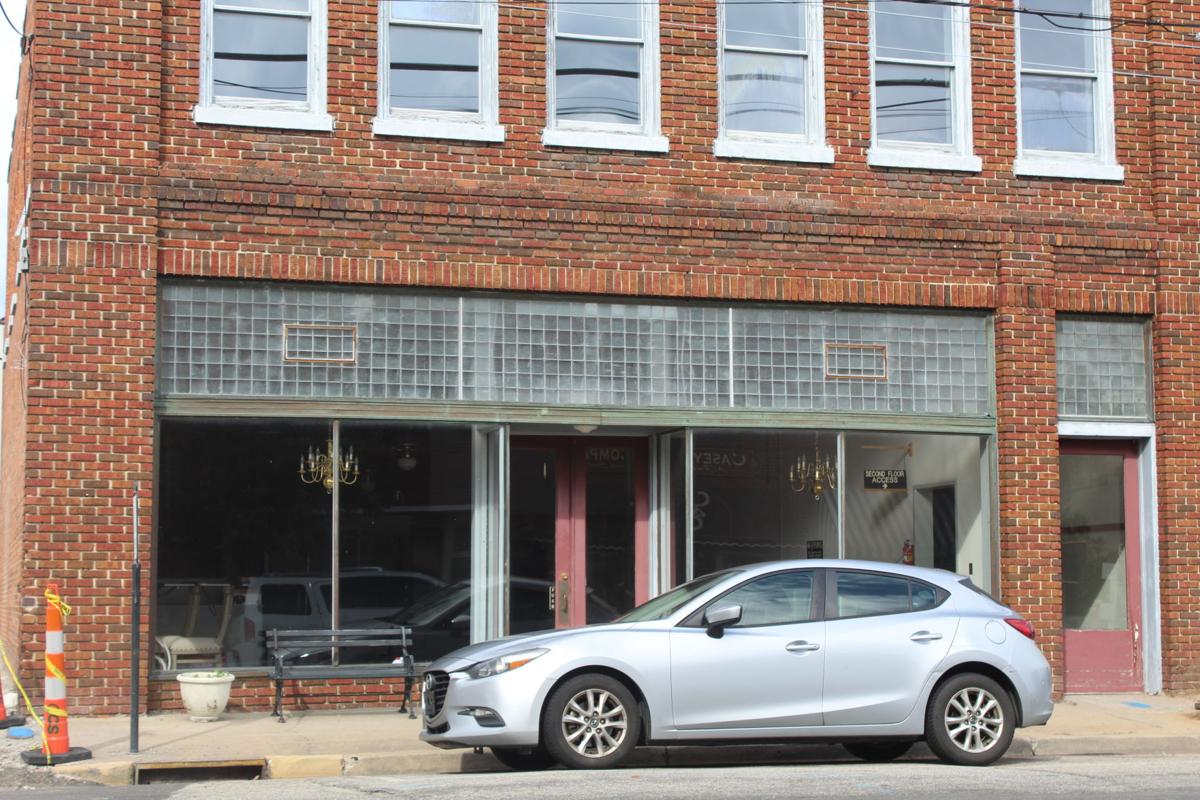 This building that once housed an antique store has been bought and is about to be renovated after years of sitting idle.The new owners says he'd like to see more things for kids to do in Downtown Conway. 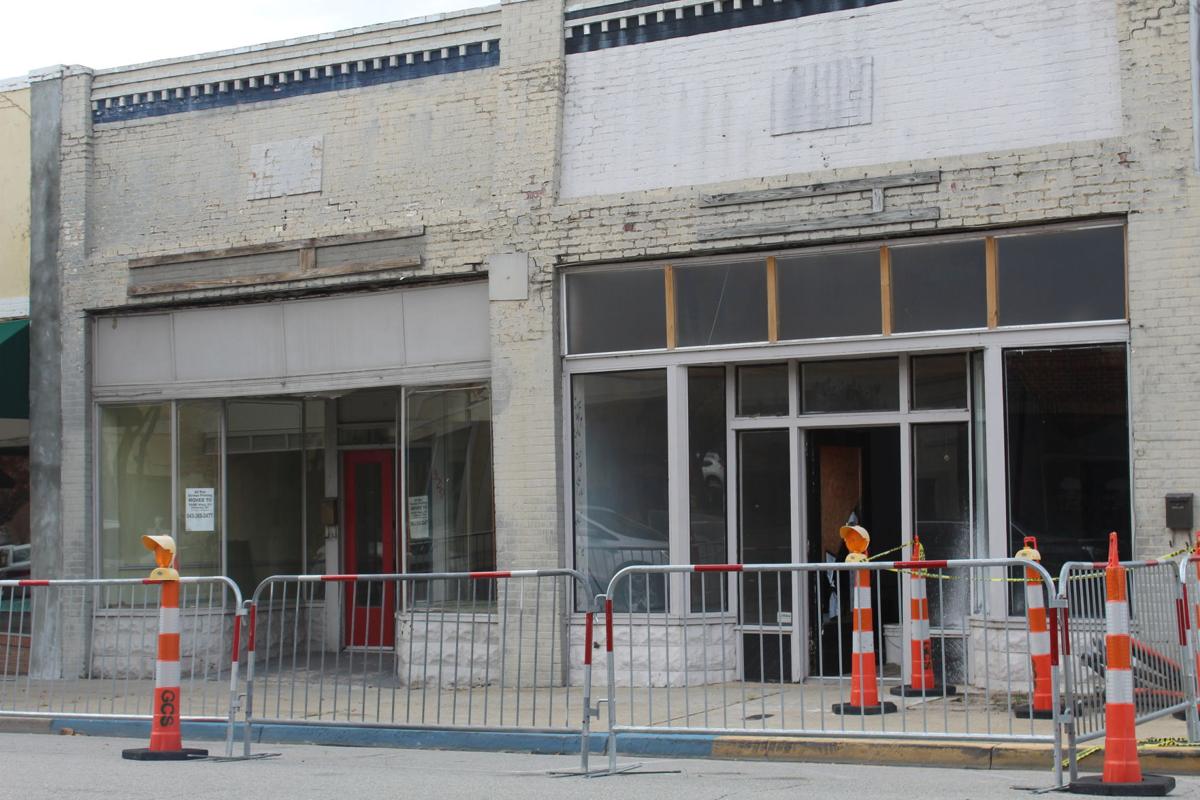 This bady-deteriorating building is set for renovations that will include an energy efficient roof.

The same artist that painted the mural on the wall in the new Kingston Park is busy painting this mural on the side of Papa's General Store.

This vacant building at 317 Main Street has been purchased and is slated for renovations soon.

This building that once housed an antique store has been bought and is about to be renovated after years of sitting idle.The new owners says he'd like to see more things for kids to do in Downtown Conway.

This bady-deteriorating building is set for renovations that will include an energy efficient roof.

A Coca Cola mural on the side of Papa’s General Store and fresh green paint soon to be applied on the Main Street side of the old Jerry Cox building are signs of a burst of sales and improvements in Downtown Conway.

Conway Downtown Alive director Hillary Howard says for years she’s had only two properties to show people who wanted to start businesses in the area, but new owners of several of the buildings are ready to renovate their buildings and bring in new restaurants, retail stores and offices.

He said he was prompted to buy the building because he knew that if it wasn’t repaired soon, city official were going to require the former owner to demolish it, and he didn’t want that.

“My concern about it is we’d have another bare spot in the city,” he said, adding that he didn’t want another open space like the one on the other side of Laurel Street.

He concedes that his new building needs much work.

“Basically all I bought was two exterior walls. I’ve got to tear the roof off and take down the storefront and start putting it back together,” he said.

Green thinks it will likely be about March before the renovations are complete.

Although he doesn’t have a specific business in mind he just wants, “anybody that wants to stay open late.”

“My hope, I’d love to see any business that stays open after 5 or 6 o’clock.”

Green says he and his wife love to go downtown to eat dinner and then hang out there with their friends.

If someone wants to make a deal with him now, he is willing to custom design the building for the renter’s needs.

Green already has experience in the area. His company renovates historic houses. He chairs Conway’s Planning Commission and is a partner in Trademark Home Interiors in Downtown Conway.

One of the unique ideas he has for the old building is to put in a super efficient heating and cooling unit and a structural insulated panel that is a roof and an insulated panel all in one. He said it eases construction and is energy efficient.

“Part of what drove me to do this is the changes that we have seen in downtown, especially since Adam (Emrick) and Mary Catherine (Hyman) have been involved. It’s been very nice working with the city,” he said, also mentioning building inspector Robert Cooper.

Teague Hopkins, who bought the building at 317 Main St., this past summer, says he’s noticed that other downtown buildings have been bought and are set for renovations.

“I tell you what I think, it’s amazing. I think Downtown Conway is a gem and I don’t know why it’s not more of a destination and a night destination as well. There are a lot of downtowns in South Carolina that have been revitalized and are prospering,” he said.

He points to Greenville where his parents live.

“It’s so alive. I think Conway can be the same thing,” he said.

Hopkins says he just likes old buildings and is familiar with Conway because his office on S.C. 90 is not far from Downtown Conway.

‘I think Conway could rival the beach as far as a destination for where people can go, especially eating and shopping at night,” he said. ”I don’t understand everything just shutting down at 5 p.m. I think it could be a nightly destination as well.”

The owner of DCH Construction said he plans to renovate his new building with hopes of renting it. He is looking at a retail business downstairs and offices upstairs, and thinks he has someone interested in it.

David Nye, owner of Kingston Properties, has the task of figuring what Susan and Marshall McMillan should do with their fairly-recent purchase, the old Jerry Cox building.

Mrs. McMillan appeared before Conway’s Community Appearance Board briefly this past week when she got permission to paint panels on the front of the building.

“We’re trying to put in some retail up on Main Street and we’ve been all around downtown and talked to the other retailers downtown to see what they would like to have in there, so we’ve gone out looking for people to bring into town or local people to come into town,” Nye said.

Renovations will likely begin on the back of the building where Nye envisions possibly two restaurants. One would be pretty large and one something like a tap room or sports bar situation, he said.

Adding the portion of the building that opens onto Norman’s Alley grows the area to 10,000-square-feet. That area could be divided up. He is looking to “do something really nice in there and have something like some outside seating…on Norman Alley,” he said.

He hopes to make Conway a destination place for diners. People could come walk around Downtown Conway and then decide where they want to eat.

The property also includes six stores on Main Street. Three are vacant and three have businesses that are doing really well, according to Nye.

He’d like to see something come in that will complement those businesses in the front. Altogether, the building is about 30,000-square-feet, so it’s a pretty big building, Nye said.

“The McMillans are really excited about it and so are we,” Nye said. “It gives us a chance to hopefully breathe some new life in downtown,” he said.

Nye said he envisions a restaurant where people go to have a glass of wine or a beer or something. It should work really well,” he said.

He points to Conway’s retired population that likes to go out to restaurants, especially in conjunction with theatre performances.

Conwayite Kevin McHugh is also ready to become a downtown businessman with the purchase of 1014 Fourth Ave. He is still deciding what to do with the building, but can’t start his renovations until he is approved by the city and, he hopes, gets a listing on the historical registry. The building dates back to 1925, so he believes he’ll get his listing within about one month.

McHugh had an office on Third Avenue in Downtown Conway for seven years when he worked with Embrace Hospice. He even bought a house in Conway, but it was destroyed by Hurricane Florence. Despite that, he decided to stay in Conway, he said.

He said his purchase of the Fourth Avenue building was an effort to help the City of Conway grow and do something different. He also sees it as an investment for him, his wife and family.

His building renovations will include a new roof, new electrical system, an elevator and sprinkler system, for starters.

He is interested in expanding the offerings of Downtown Conway and the hours that its businesses are open. He says now the area is good for women to shop and eat, but there’s not much else for other members of the family. He’s especially interested in children. He says there’s nothing for them to do downtown now – just eat and go home.

“We need to grow Conway to take care of Conway. I think some of the old guard stands in the way of some of that. Somebody’s going to have to break that 5 o’clock wall to get people all to do it, so they understand it’s great for business, great for the community,” he said.

One idea he likes is making Laurel and Elm streets one way between Second and Fourth avenues so parking can be changed to “wing” style instead of parallel. He thinks that will triple the number of parking spaces while making parking easier for large vehicles.

He’d also like to see some easing of the rules for businesses locating in Downtown Conway so it’s easier to start a business and not so expensive.

He is also complimentary of City Administrator Adam Emrick and thinks the two new additions to Conway City Council will make a nice difference.

“The two new members are very proactive and forward thinking. People that want to see Conway grow and not turn back the pages, so I think it’s all good stuff. We have a pretty good town council now,” he said.

“What’s ironic is, a lot of people don’t understand, a lot of the buildings that you and I are discussing were not available for rent…I have two things to show now. That has been the case for several years,” Howard said.

Now she thinks people’s confidence in downtown is growing, and that’s fueling the sales.

She says they have a list of people waiting for the renovations to be completed and she is excited to be able to show them new opportunities in the next six to 12 months.

With renovations already underway, she’s expecting new life in the downtown area in the very near future.