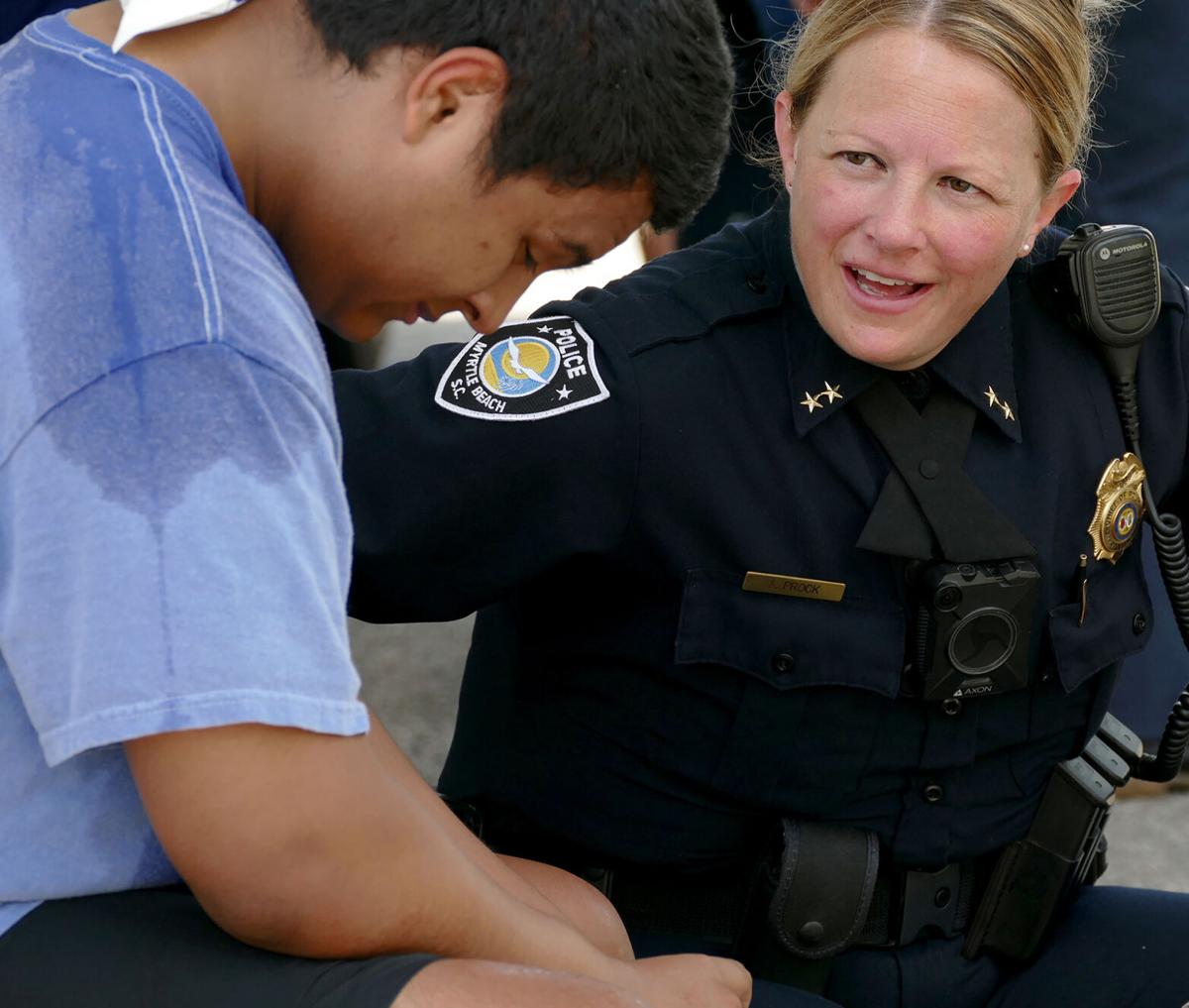 Myrtle Beach Police Chief Amy Prock talks with Willy Brizuela after the 21-year-old Hartsville man completed the obstacle course on Saturday, July 17, 2021. Brizuela finished at 1:52 in the course. The state requirement for recruits is 2:06, MBPD’s Thomas Vest said. On Friday, six new police officers and one new detention officer were sworn in after graduating from the South Carolina Criminal Justice Academy. Vest said the department is currently hiring. Photo by Janet Morgan/janet.morgan@myhorrynews.com 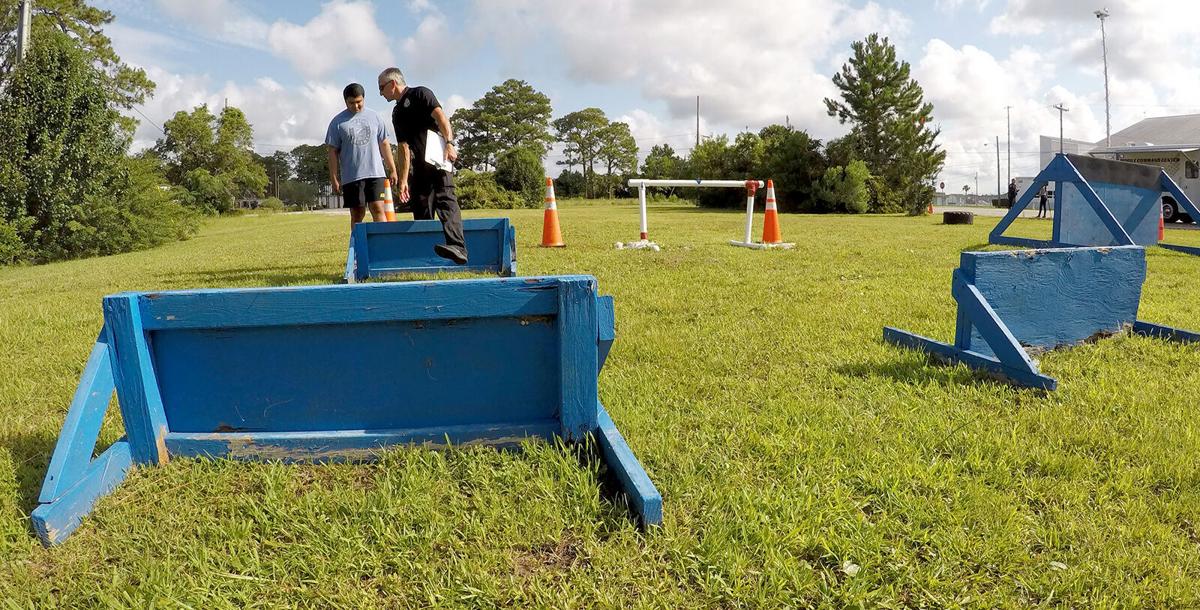 Willy Brizuela, 21, of Hartsville listens as Myrtle Beach Police Department’s Tony Klimas walks him through an obstacle course on Saturday, July 17, 2021. Klimas clocked Brizuela in at 1:52 in the course. The state requirement for recruits is 2:06, MBPD’s Thomas Vest said. On Friday, six new police officers and one new detention officer were sworn in after graduating from the South Carolina Criminal Justice Academy. Vest said the department is currently hiring. Photo by Janet Morgan/janet.morgan@myhorrynews.com 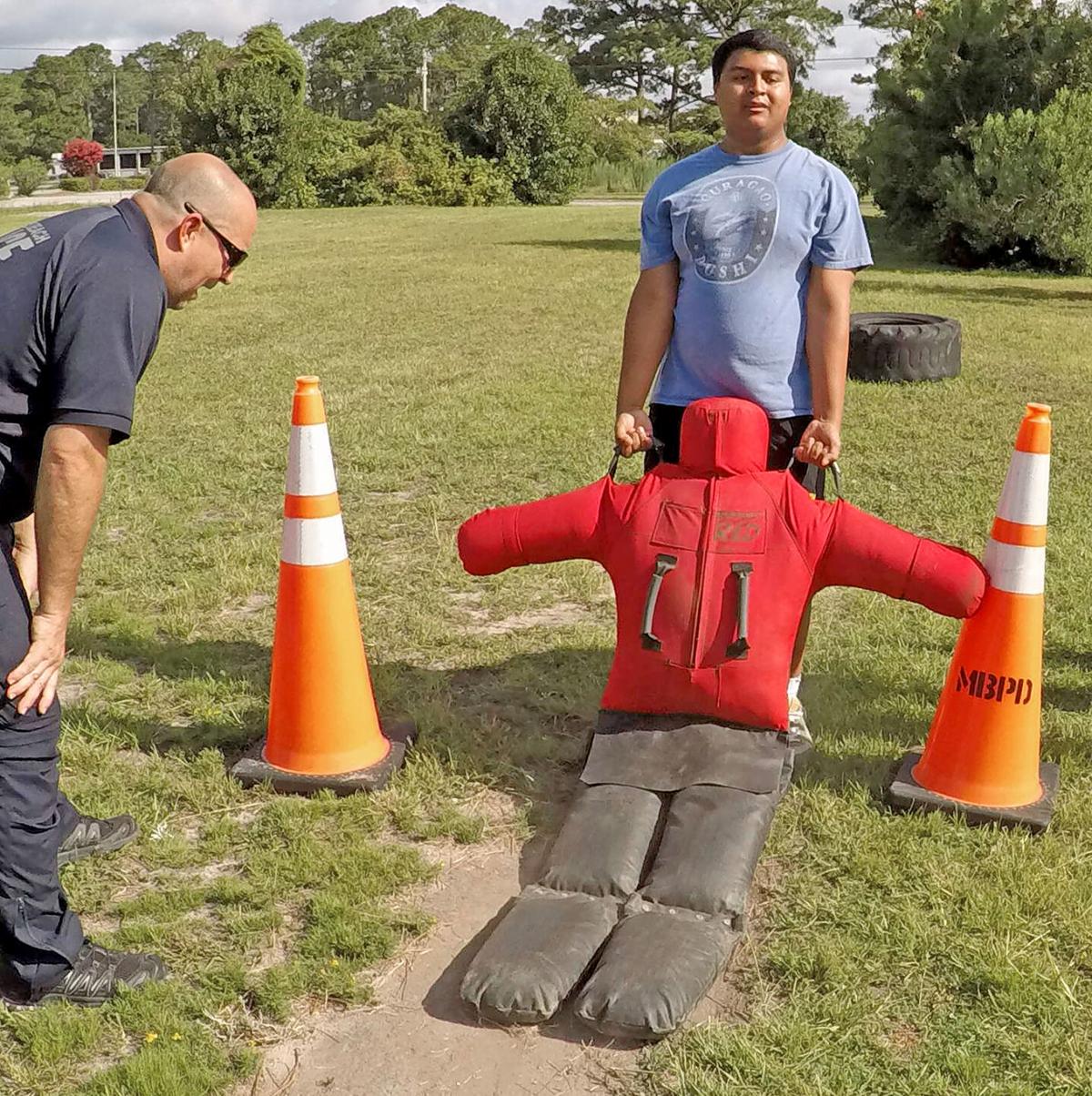 Willy Brizuela, 21, of Hartsville pulls a 166-pound dummy for 20 feet in the Myrtle Beach Police Department obstacle course on Saturday, July 17, 2021. Brizuela finished at 1:52 in the course. The state requirement for recruits is 2:06, MBPD’s Thomas Vest said. On Friday, six new police officers and one new detention officer were sworn in after graduating from the South Carolina Criminal Justice Academy. Vest said the department is currently hiring. Photo by Janet Morgan/janet.morgan@myhorrynews.com

For an unofficial practice round, it set up an obstacle course Saturday near the Warren S. Gall Police Annex in Market Common, complete with hurdles, traffic cones and a 166-pound dummy participants had to drag several yards before completion.

“We’re putting faces with names,” said MBPD Spokesman Cpl. Tom Vest. People can “get to know everyone who’s part of this hiring process” and “try this out so it takes (off) some of the pressure.”

Vest added that people who finished within the qualifying time of two minutes and six seconds may use the test run in their application.

MBPD currently has 45 open slots, Vest said, adding that they will be divided into groups of 15 during training to ensure all members can fit in a van.

Vest said the open slots resulted from voluntary severance as well as retirements.

"We have seen more turnover in the last two years than in previous years including 16 retirements in 2020 as part of the city's voluntary severance program and more officers leaving the law enforcement profession than in the past," he explained. "Ten of the positions are new on a grant, and the rest are to fill openings from employee separations."

He added that MBPD "also continued to partner with other law enforcement agencies during the demanding summer season to provide additional coverage just like we have for the past several years."

The department has received 103 applicants so far, which according to Vest is a strong showing.

Around 15 people turned out Saturday morning, among them former firefighter James Holland.

“I resigned from the fire department for cancer, but I’ve been cleared to go back,” said Holland, 43, adding that his “love and passion for law” inspired him to try out. “It’s God's time. He told me this was my moment.”

DeShawn Kuhl is pursuing law enforcement as an alternative to his family’s history of military service.

“With me and my family, we grew up with serving,” said Kuhl, 21, adding that his grandfather served in the Air Force and Navy. “When I was in the gym I was doing core and upper body, but majority of the course was leg work, lower body, center of gravity. Definitely an eye-opener.”

Shooting off fireworks in Myrtle Beach? It might earn you a trip to jail

According to Vest, the COVID-19 pandemic challenged recruitment in 2020.

“We were on hiring freeze for a while so that definitely affected us,” he said. “A lot of our applicants come from out of state and it wasn’t possible for many to come visit.”

Vest said the same of nationwide protests against police violence and systemic racism last summer, as well as the general nature of policing.

“We had a lot of Facebook comments that were really brutal,” he said, adding that policing entails "long hours, you’re never going to get rich doing this.”

“One of my biggest goals is to help change the stigma around law enforcement,” Holland said. “It’s been frowned upon by society. I want people to know that we’re not all bad.”

“If you want change in law enforcement, you need to step up and be that change,” he said. "It’s our job to make sure the good apples outweigh the bad.”

Prospective officers have until July 31 to apply.

The Myrtle Beach Police Department has been borrowing high-powered weaponry from the Pentagon through an obscure program that provides surplus military equipment to law enforcement.