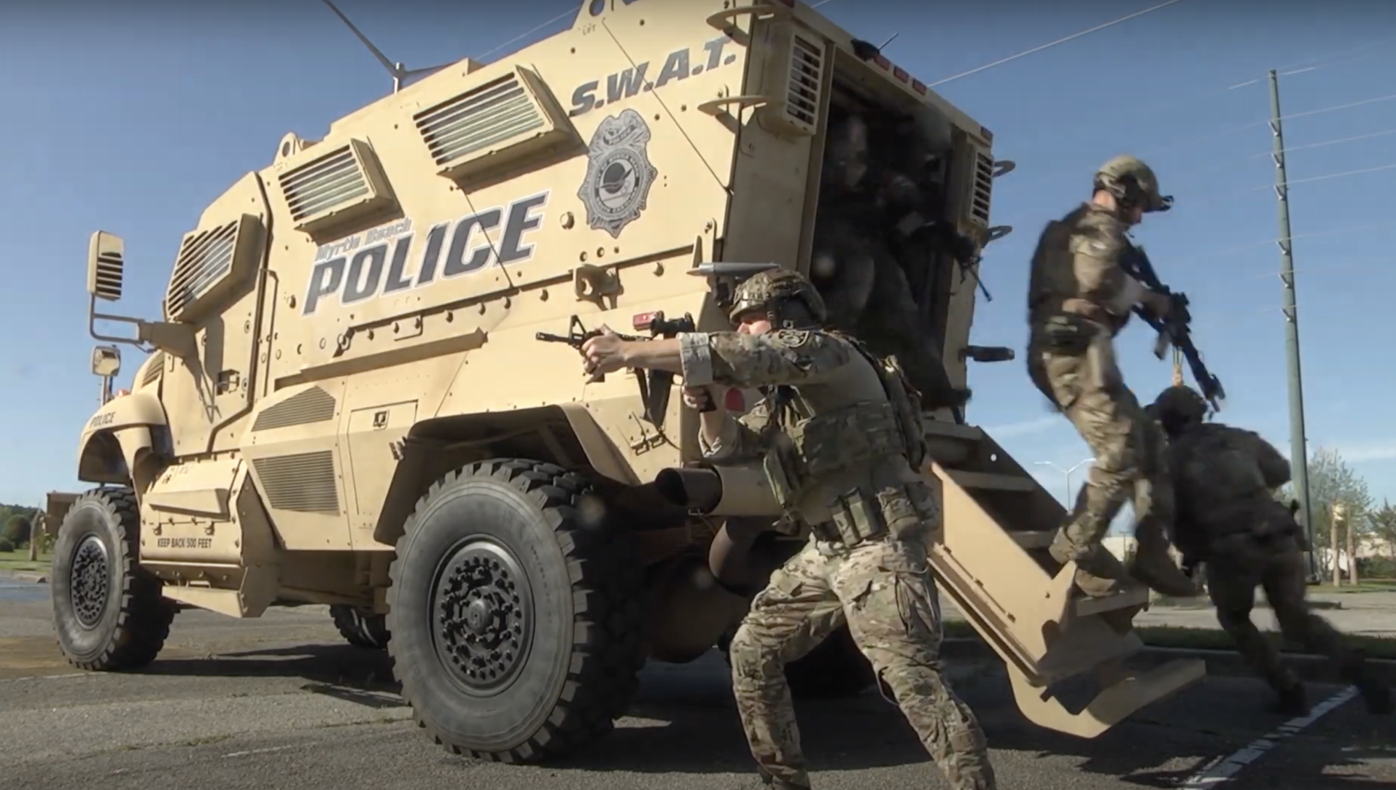 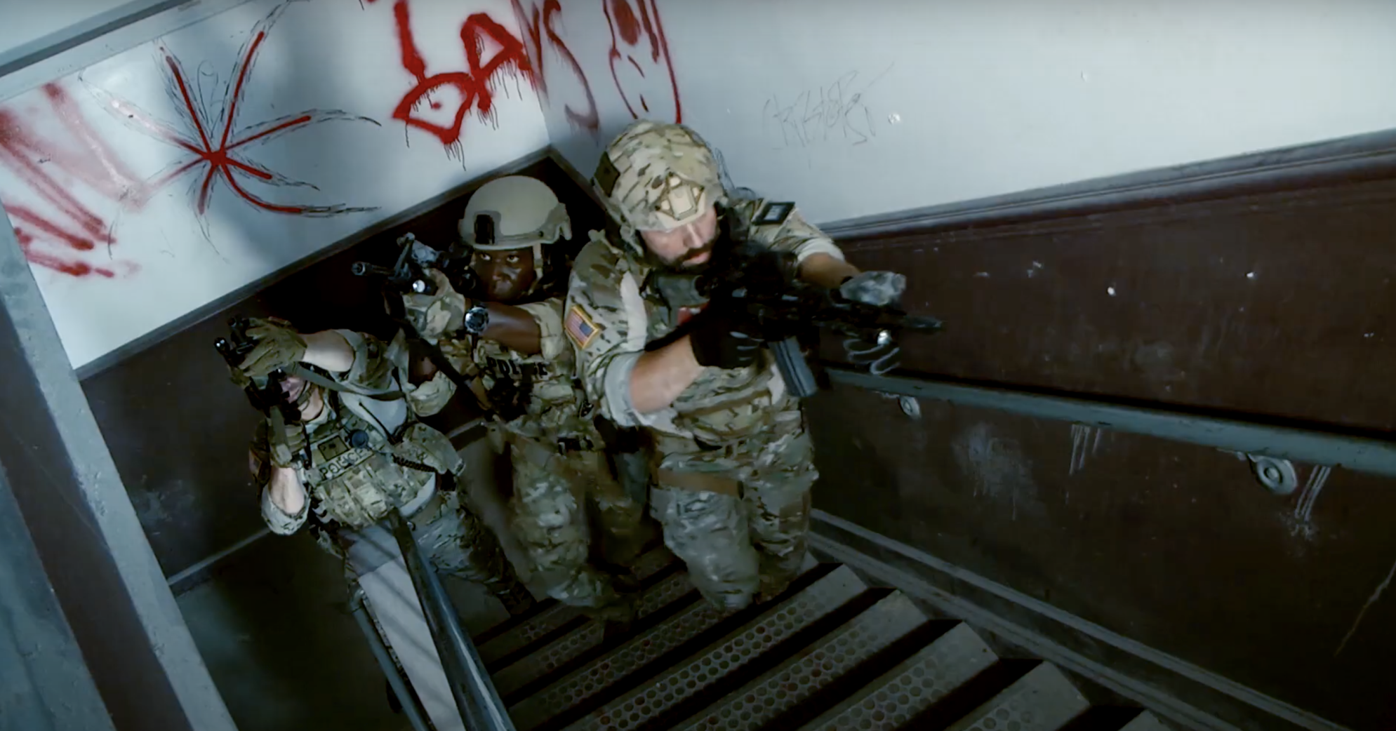 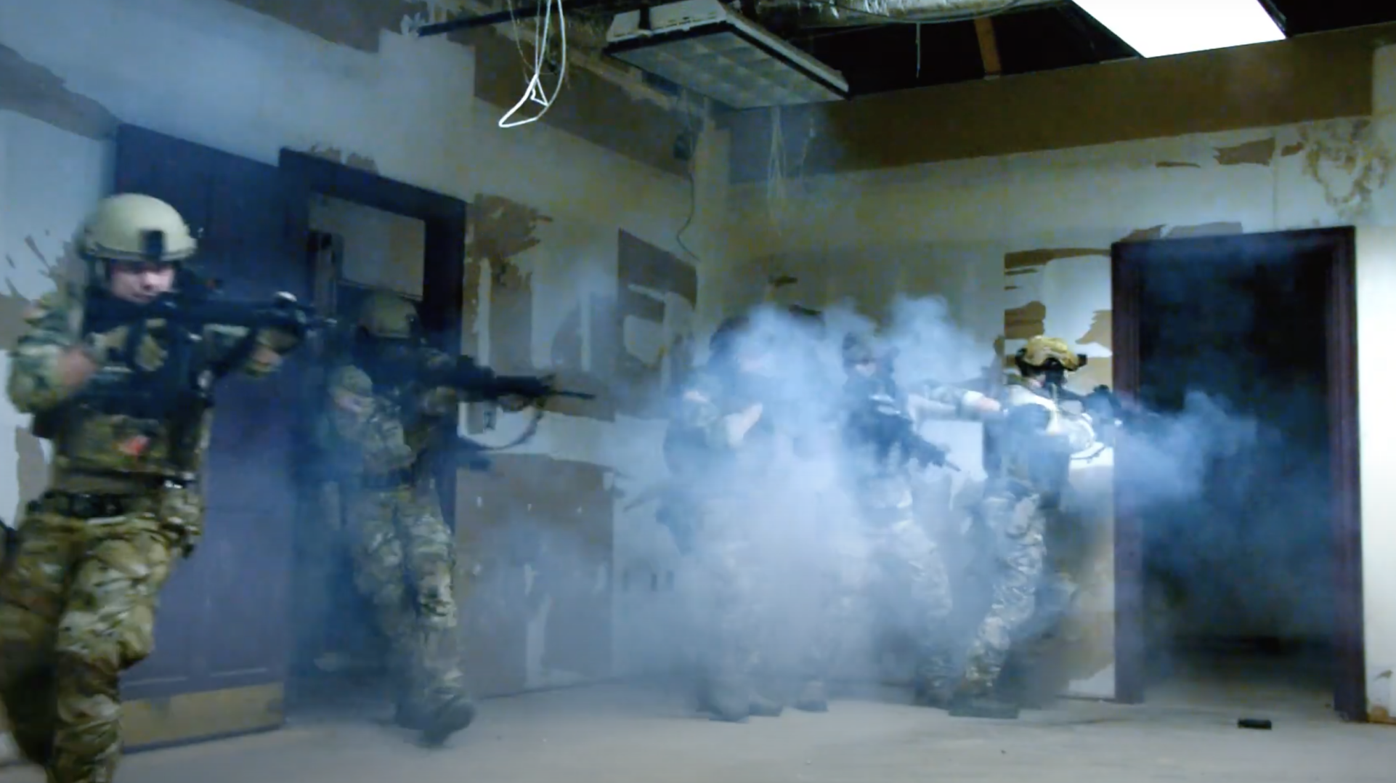 MBPD S.W.A.T. dramatizing use of flashbang during a raid.

Although officers maintain the program is essential for meeting threats on the ground, critics say it contributes to the militarization of the police at a time when many are asking for more restraint from law enforcement.

“Patrol rifles are rifles carried in cars for Patrol Rifle-certified officers,” said Cpl. Tom Vest, spokesperson for MBPD. “If an officer is describing a threat that is bigger than the pistol can handle, then they can be used.”

To obtain the equipment, MBPD submits applications to the S.C. Law Enforcement Support Office (LESO), which determines whether the agency meets the right criteria.

Since the equipment is already paid for, MBPD is only responsible for covering the cost of transportation and maintenance.

Controlled items — like the the Mine-resistant Ambush Protected (MRAP) military tactical vehicle and the 18 AR-15s — are audited by LESO every year. Other controlled items include infrared scopes and medical supplies.

Over its decade-long participation in the program, the department has acquired nearly 150 controlled items collectively worth over $2.7 million.

Uncontrolled items only have to be tracked through the first year.

“Things like boots, t-shirts, multi-tools, sunglasses, watches, etc., are not controlled items and were issued to officers, and are no longer tracked based on the time frame,” Vest said in an email.

Frank Knaack, executive director of the ACLU of South Carolina, said the department's participation in the program was a doubling down on the same aggressive tactics that sparked nationwide protests last year.

“In the last year and half there’s been a reckoning on police violence, particularly toward Black and brown Americans, and there’s a movement to reorient toward de-escalation and think of alternatives to using police,” Knaack said. “It’s deeply concerning to see police departments digging down on the militarization of the police.”

To some, an MBPD recruitment video from 2019 showcasing some of the equipment plays into that criticism.

In the clip, posted to the department’s YouTube page, officers wearing camo fatigues file out of an MRAP and brandish AR15s as they carry out a raid of a dilapidated warehouse, throwing a flash bang before storming a room on the top floor. An action movie score plays in the background.

Several in the comments section call out the militaristic image put forth by the department.

“This makes your department look like a military assault unit,” wrote Michael Ferrini.

Vest said this was intentional.

Jonny McCoy, a Myrtle Beach-based civil rights attorney, said strict standards should be in place for the weaponry.

“The concern is with these kinds of weaponry, you’re going to start murkying the waters between police and an occupying force,” he said. “I’m concerned that a proven commando force is not making corrective changes to their policies but continuing to add guns and munitions. I’m not against guns and munitions, so long as they change their policies.”

Vest defended the program, saying that police don’t get to turn down assignments where they may be outmatched on the street.

“The big thing for us is we don’t get to back away, and we don’t always get to ask for help,” Vest said. “We don’t get to say we can’t go to a call, so we need to have the equipment to stabilize a situation.”

Vest cited the case of deceased MBPD Officer Jacob Hancher, who was killed by rifle fire in Oct. 2020.

“Police departments are facing more threats from active shooters and just well-armed people,” Vest said, adding that the MRAP can assist in these situations "if something required us to put an armored truck as a barricade between officers and suspects."

Julinna Oxley, co-founder of the social justice nonprofit Grand Strand Action Together, similarly tied the program to the widespread availability of guns.

“I’m of the opinion that citizens shouldn’t be having high-powered rifles,” Oxley said. “It seems like all we’re doing is an arms race between citizens and law enforcement. Where is this going to lead? If citizens are carrying assault rifles, so now police do, where does this end.”

The department is one of more than 8,200 law enforcement agencies across the country that use the program.

While programs to offload surplus military equipment have existed in some form since World War II, transfers to law enforcement were established by the National Defense Authorization Act of 1990 to assist drug interdiction efforts on the federal and state level. Transfers were extended to local law enforcement agencies in 1997.

"We've seen how militarized gear can sometimes give people a feeling like they're an occupying force, as opposed to a force that's part of the community that's protecting them and serving them," Obama said in a 2015 speech in Camden, New Jersey. “So we're going to prohibit some equipment made for the battlefield that is not appropriate for local police departments.”

But in August 2017, then-President Donald Trump repealed the ban.

“We will not put superficial concerns above public safety,” then-Attorney General Jeff Sessions told the Fraternal Order of Police at a conference. “We have your back and you have our thanks.”

The Trump Justice Department argued that concerns around the program were cosmetic and that the program deterred crime and protected officers.

At the time, nearly $5.5 billion in military equipment had been transferred to law enforcement agencies across the country.

Two lawsuits alleging lawlessness and retaliation in the Horry County Police Department may shed light on a discrimination case that resulted in two terminations.