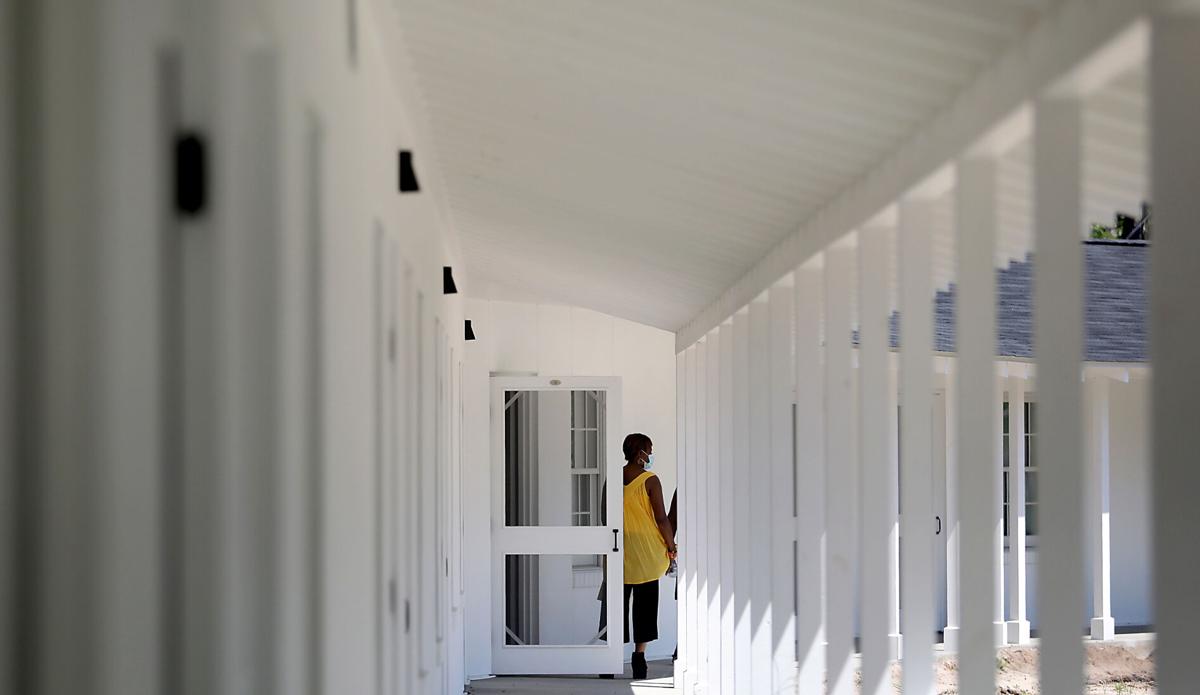 Cookie Goings looks at the motel rooms at the freshly painted Whispering Pines Motel beside what had once been Charlie’s Place in Myrtle Beach. The city-owned property has several of the rooms for a museum to represent the 1940s to the 1960s. The project also has the renovated and restored home of Charles and Sarah Fitzgerald that can be used as community gathering spots and meeting spaces. The motel side of the project includes four incubator spaces for start up businesses. Photo by Janet Morgan/janet.morgan@myhorrynews.com 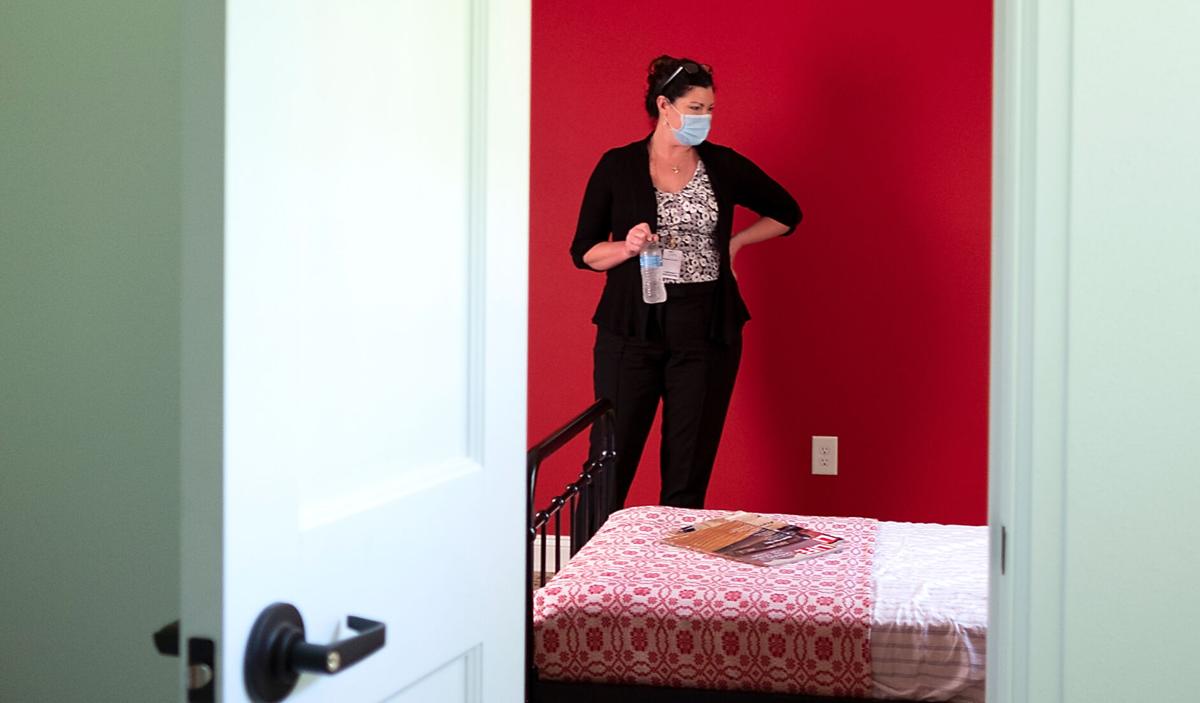 Lisa Wallace, Myrtle Beach’s assistant city manager, tours the Whispering Pines Motel beside what had once been Charlie’s Place in Myrtle Beach. The city-owned property has several of the rooms for a museum to represent the 1940s to the 1960s. The project also has the renovated and restored home of Charles and Sarah Fitzgerald that can be used as community gathering spots and meeting spaces. The motel side of the project includes four incubator spaces for start up businesses. Photo by Janet Morgan/janet.morgan@myhorrynews.com 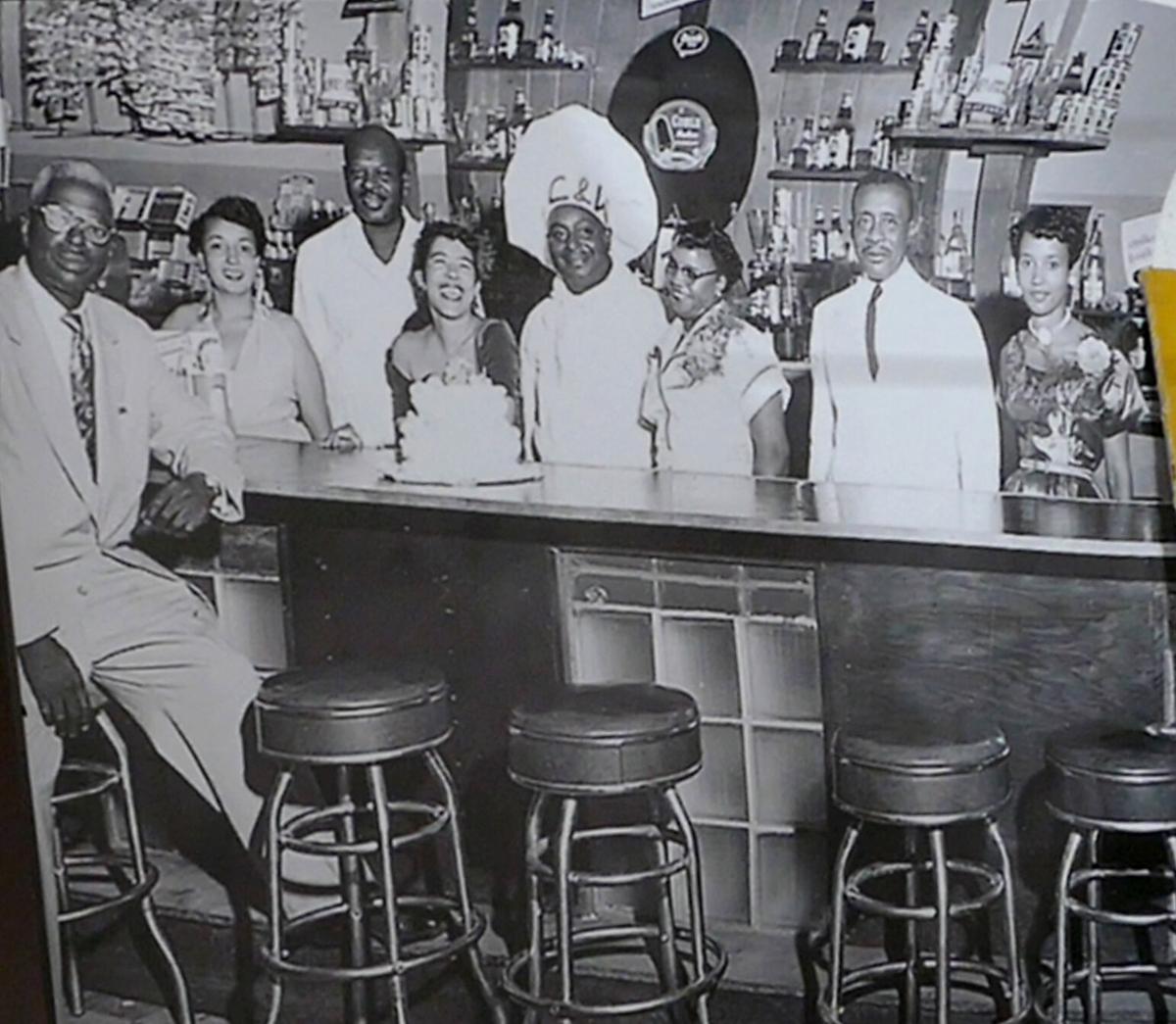 The staff at Charlie’s Place is featured in one of the many photographs at the city-owned property in Myrtle Beach.

People tour the freshly painted rooms at the Whispering Pines Motel beside what had once been Charlie’s Place in Myrtle Beach. The city-owned property has several of the rooms for a museum to represent the 1940s to the 1960s. The project also has the renovated and restored home of Charles and Sarah Fitzgerald that can be used as community gathering spots and meeting spaces. The motel side of the project includes four incubator spaces for start up businesses. Photo by Janet Morgan/janet.morgan@myhorrynews.com

Soon there will be more than echoes of Charlie’s Place in Myrtle Beach.

The city-owned property off Carver Street had included Charles and Sarah Fitzgerald’s home in the center of a pair of low-slung motel buildings spanning out like angel wings. As the years passed and the buildings sat empty, the right wing of the motel crumbled and was eventually demolished. The left wing was little more than a cluster of rooms that have since been used to recreate the motel setting.

To the right of the home, past the footprint of the broken motel wing, sits a vacant lot thick with grass.

That lot held Charlie’s Place. That place was where Ray Charles, Billie Holiday, Lena Horne, Little Richard and Duke Ellington performed. That place was a dance hall, music venue and chunk of Myrtle Beach history. That place had a manager named Cynthia “Shag” Williams who taught club goers how to blend rhythm and blues swing dance steps into a unique dance.

Since then the Carver Street Renaissance Group gathered stories, collected memorabilia and was instrumental in the production of the Emmy-award winning documentary “Charlie’s Place.”

The city received about $500,000 in community development block grants to rehabilitate the structures and spur development in the Booker T. Washington neighborhood, which is tucked between Mr. Joe White Avenue and 21st Avenue North. The grant money was used to preserve the 1,264-square-foot Fitzgerald home with an additional 240 square feet of a screened porch, reconstruct the four rooms remaining at the motel as well as add eight more rooms in the same footprint of what has been called the Fitzgerald Tourist Court motel or the Whispering Pines Motel.

Roddy Brown’s eyes followed a line of porch beams outside of the motel rooms as he talked about being a teenager when Charlie’s Place was thriving. He said he lost a job at a nearby laundromat because he skipped work on a chance he could catch a performance at the club.

“I didn’t get in,” he said nodding. “It was James Brown. I had to take a chance. James Brown.”

Vinyl record jackets of passed performers are propped on the window sills in the freshly painted motel rooms.

The rooms are representational of the 1940s through the 1960s when the motel and club thrived. Each is decorated for the decade it represents with beds, lamps, blankets, suitcases and even a few items left in the bathrooms from the assigned decade.

There’s also a room dedicated as the Green Book room to show visitors what could have awaited them in the days of segregation.

Slipped on the end of the motel rooms are meeting rooms and four incubator spaces.

Now, a city advisory committee is in the beginning stages of deciding what types of businesses are allowed in the incubator spaces, which neighborhood residents get preference when applying for spaces and how the application will look for those applying.

The motel and adjoining vacant lot are zoned mixed use medium density, according to the city’s zoning department.

Alfreda Funnye of the city’s neighborhood services department said since the rooms don’t have running water the committee would not be able to allow barbershops or beauty shops in the incubator spaces. Restaurants would also be prohibited.

Funnye said it would be a perfect space for a graphic art startup business, but the committee is set to meet again in August to make decisions about the allowable businesses.

In addition to the incubator spaces, the city is also making the meeting spaces in the home and outside area available for rent by the hour.

As the committee discussed the particulars of what an incubator space application should look like, Cookie Goings sat on the edge of the room taking notes and sipping bottled water.

She wasn’t skipping work to see James Brown back in the day. She was more likely skipping home.

“I was a kid, so I wasn’t allowed to come dance rock ’n’ roll here,” the director of the city’s neighborhood services department said. “But I do have vivid memories of the place and I did have a relationship with Mr. Charlie’s wife, Mrs. Sarah.”

So vivid, she said, it makes her smile.

“It was the hub. It was the hub of the entertainment district of Myrtle Beach,” Goings said. “It is the one place that I remember hearing the conversations about, where even during segregation, where it was Blacks and whites who came together for the common good, the common cause of just enjoying music.

“I guess that’s one of the true testaments that music is the universal language written in the key of love.”

Interviews and photographs of different races dancing are peppered throughout the Emmy-award winning documentary.

It was an anomaly, but it wasn’t utopia.

The Fitzgeralds opened the club in 1937 and booked it as a stop on the Chitlin’ Circuit for Black performers. They offered the club and its stage while the motel was available for rest and shelter.

Racial tensions bubbled over on Aug. 26, 1950, when the Ku Klux Klan cruised through the neighborhood with the Myrtle Beach Police chief and the Klan’s grand dragon in the lead car, according to the documentary film.

Fitzgerald called the police department warning if the Klan returned there would be trouble. They returned and there was trouble.

Shots were fired, and a Klansman died. He was Conway police officer James D. Johnson.

Fitzgerald was beaten that night, and his earlobes were cut, according to Dino Thompson, a local author, historian and dancer at Charlie’s Place.

Several Klansmen, including the grand dragon, were arrested as a result of the shooting. But the charges were all dropped. An FBI investigation was initiated, but nothing came of it.

Fitzgerald died of cancer five years later leaving his wife Sarah to operate the club, motel and several other businesses until she closed the club, stopping the music in 1965.

But the music will live on through a $5,000 music education grant from fans of the jam band Phish. The funding is earmarked for buying instruments and providing music education classes for youth at the Charlie’s Place project.

“It’s moving along,” said Lisa Wallace, Myrtle Beach’s assistant city manager. “I’d say we still have the last phase, paving the parking area. The application process is still being worked on, but I’d say in a few months, late fall. Late fall 2020 we should be going.”