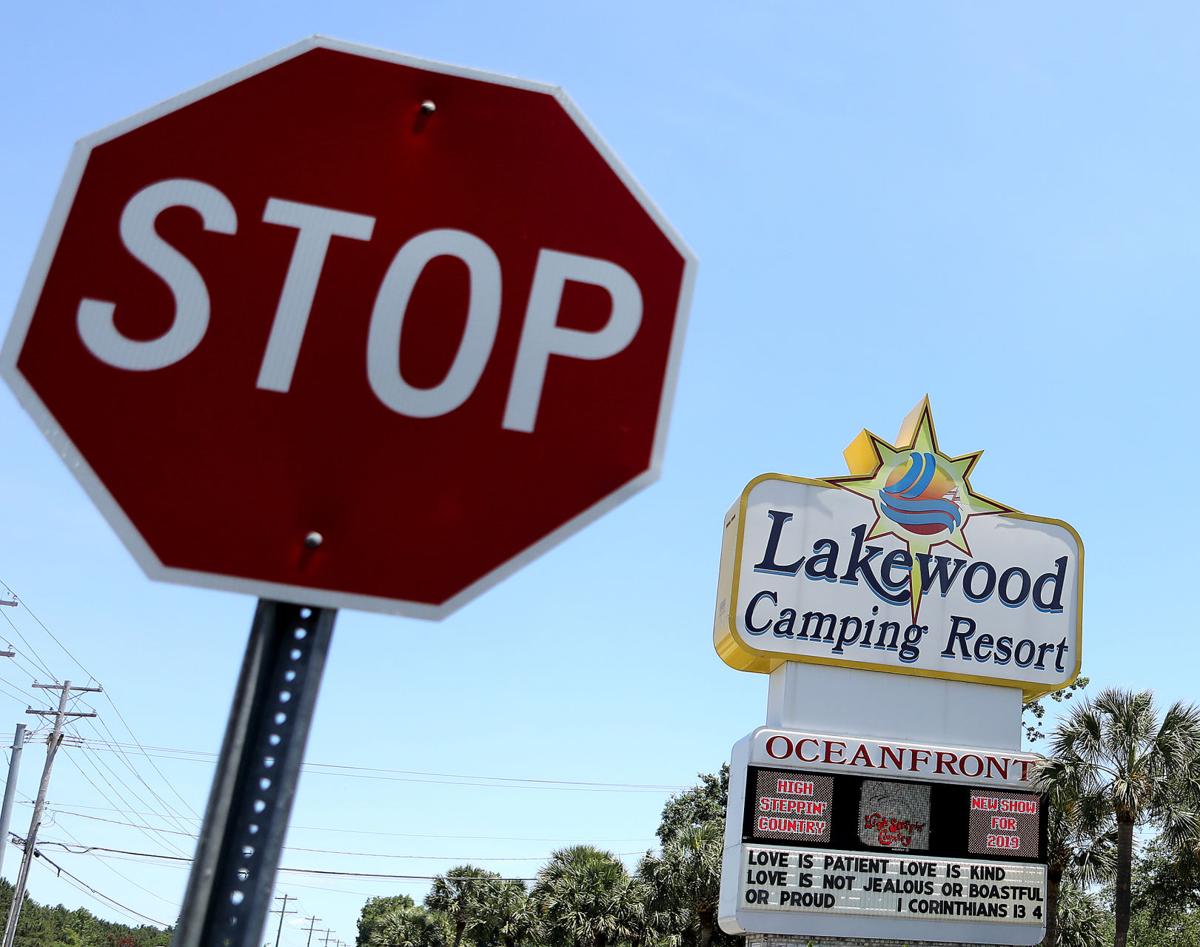 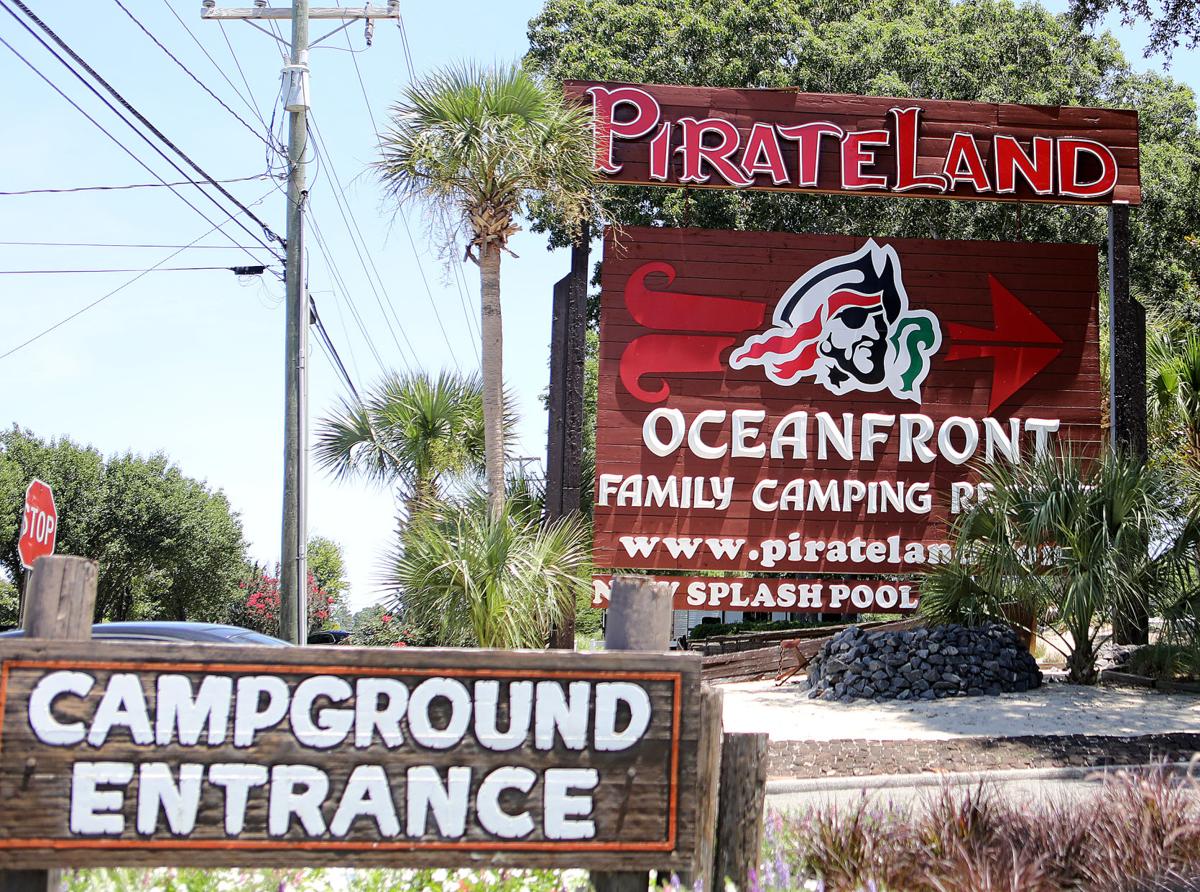 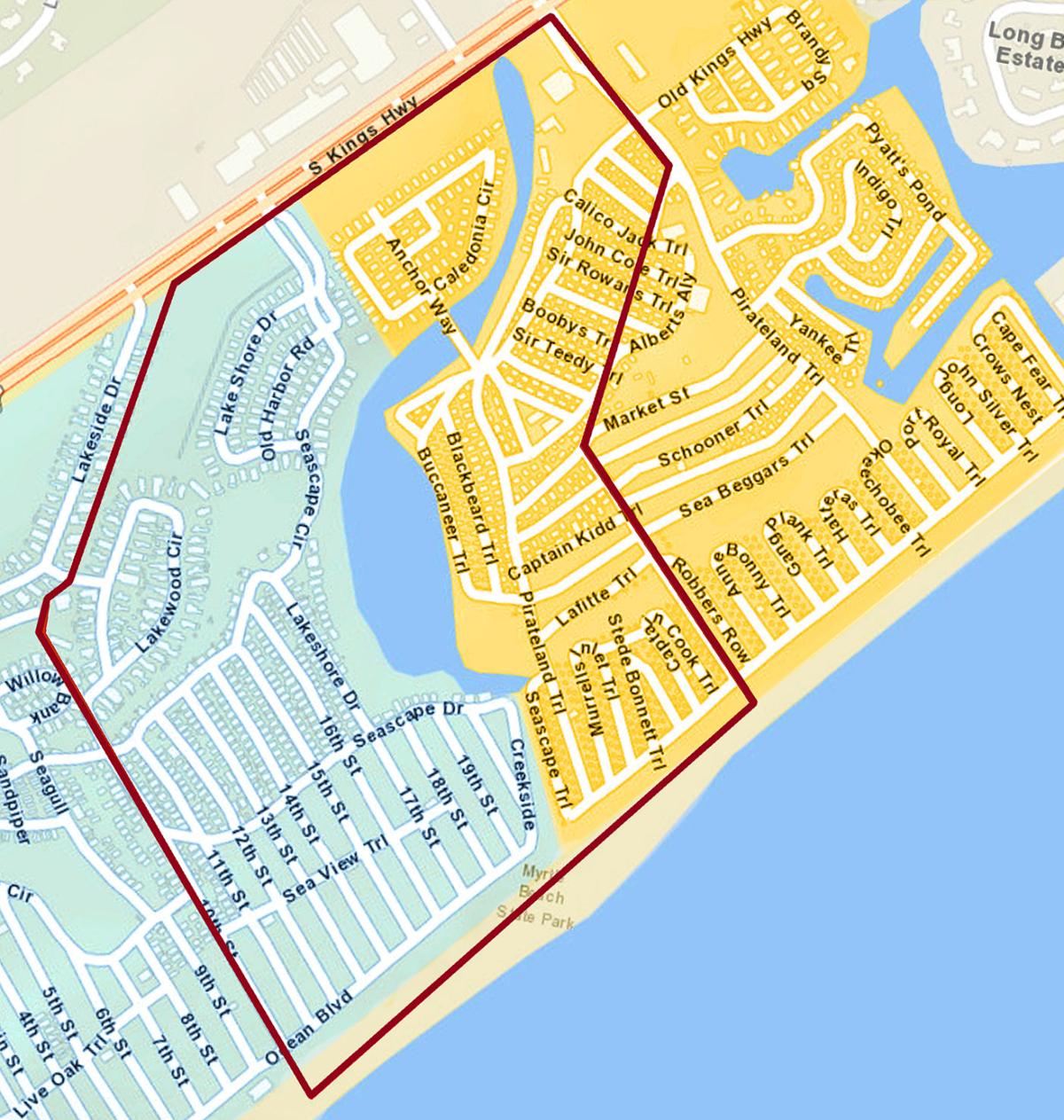 An Horry County tax map shows the city of Myrtle Beach's property that includes the southern end of PirateLand Family Camping Resort and the northern tip of Lakewood Camping Resort. Myrtle Beach plans to sell about 143 acres of the land owned by the city to the campground owners including the 12.32-acre lake that straddles the line between the two campgrounds. The PirateLand property is shaded yellow and the Lakewood property is shaded blue. The city's property line is in red.

Myrtle Beach approved selling nearly 145 acres of campground property on the Grand Strand that generate millions of dollars each year for Myrtle Beach International Airport amid the threat of a lawsuit from Horry County over the sale. City officials also decided what would happen if the sale ultimately doesn’t go through.

Myrtle Beach City Council on Tuesday voted to sell the parcels located inside Lakewood Camping Resort and PirateLand Family Camping Resort to the two campground operators for a combined $60 million. City councilman Mike Chestnut was not at Tuesday’s meeting.

Both campgrounds are located south of the city limits. The city acquired the land from the federal government after World War II when the government deeded the city the land as surplus property.

Last year, the city increased the fees associated with the lease in a five-year agreement with the campground owners. Officials said there are about 700 privately-owned structures that sit on city-owned land inside the two campgrounds and that the structures are difficult to sell because they are on land subject to a five-year lease.

The sale of the property to the campground owners lets them enter into longer term agreements with the owners of the structures, which allows those owners greater latitude to sell.

The city-owned property has been leased to the campgrounds’ operators for decades with the current leases lasting through Feb. 28, 2025. Of the $60 million being paid to the city, $10 million will be paid at closing, with the remaining $50 million being paid out within five years of closing. The agreement calls for the city to finance the $50 million, five-year payment with rising interest rates each year beginning with 1.5% the first year, 2% the second, 3.25% the third, 4% the fourth year and capped off at 5% the last year of the financing.

The county signaled its intentions to file a lawsuit in a court document filed last month. Written by deputy county attorney Randy Haldi, the filing is what’s known as a lis pendens, a Latin term that means “suit pending.” This type of record notifies anyone who might want to buy a piece of property that its title is in question. The document filed by the county states that the county is preparing to pursue an action against Myrtle Beach over the campground property in question.

The dispute centers on a 2004 agreement between the county and the city that outlines how the revenues generated from the campground land should be divided. The city leases the property to the two campground owners for $3.6 million annually. As part of the agreement with the county, the city sends 75% of the lease revenue — about $2.7 million — to the county to be used at the airport, which the county manages.

But the city maintains the county contract strictly deals with lease revenues, not the proceeds from the sale of the land.

The city’s proposal has irked county officials. They object to the sale because of the impact the lost revenue would have on airport operations. They also maintain the proposal does not meet the city’s legal obligations to the county.

“The sole purpose of the money generated from [the properties] is to support the airport,” Horry County Council Chairman Johnny Gardner previously said. “If that is sold and that money goes somewhere else, it won’t be supporting the airport.”

County officials maintain that both the 1948 deed to the property from the U.S. Government and the 1953 release from the federal government “are expressly premised on agreement that these properties are intended for the use and benefit of the airport,” according to the county’s letter to the city.

“This fundamental understanding” was the basis for the 2004 city-county agreement, Gosnell wrote.

The administrator gave Myrtle Beach officials 10 days to confirm that the city intended to comply with the 1953 release, “wherein the city obligated itself to ‘utilize any revenue derived from the use, lease, or disposition’ of the properties for the benefit of the airport.”

In the court document filed last month, the county's deputy attorney wrote that the upcoming action will focus on the “rights and obligations of the parties.”

If the county sues, this would be the third major city-county dispute to wind up in court in the last two years.

In August, the two sides agreed to settle a 2019 lawsuit that the city filed over the county collecting a hospitality fee inside city limits without the city's consent. Though it seemed most aspects of that case had been resolved as the parties waited for the S.C. Supreme Court to determine how $19 million in fee collections would be distributed, the court rejected the settlement reached by both sides, effectively telling them to go back to the negotiating table and reach a consensus without any disagreements. Thus, the matter currently remains unresolved.

In a 2018 case, the county and Horry County Schools argued that the city withheld millions in public funds from the county and the school district. The city planned to use that money for infrastructure projects in The Market Common area. That case remains pending in court.

Though closing of the campground land sale was originally anticipated to happen by the end of the year, city attorney William Bryan Jr. said Tuesday that the county filing a lis pendens makes that “practically impossible.”

“That won’t happen,” he said. “It won’t happen until we get straight with the county and the lis pendens is released.”

The agreement approved Tuesday calls for the the city to annex the property with the city taking over the stormwater maintenance on the 145 acres. Currently there is no land that connects the campground property to the city limits.

The nearly 145 acres inside the campgrounds is divided into five parcels that include the southern end of PirateLand and the northern tip of Lakewood. The five parcels include a lake that straddles the line between the two campgrounds. The city’s land reaches from Kings Highway to the ocean.

The current lease dates to 1990 with amendments in 1999, 2009 and 2019. Officials said the campgrounds would like to continue using the land as a campground without plans of other types of development.

Carl Perry founded Lakewood in 1961. The campground is operated by the second and third generation of the Perry family. It is located at 5901 South Kings Highway.

PirateLand is located just north at 5401 South Kings Highway. It was founded in the 1960s. It currently operates on 180 acres, according to the campground’s website.

Since the city’s first of two required readings to approve the sale, earnest money deposits for each campground has been reduced from $100,000 to $50,000.

The city can choose to back out of the deal upon an “adverse judicial determination” — that is, if it is ruled the city doesn’t have the ability to sell the property or, Bryan, the attorney, said, upon the finding that the county is entitled to a greater percentage of the sale price than the city would stomach, then causing Myrtle Beach to terminate the agreement.

If Myrtle Beach does back out of the deal, the city would return the earnest money with each purchaser receiving a lease payment credit of up to $150,000 for the buyers’ sunk costs (such as appraisal-related expenses or attorney fees.) Also, each campground operator would be entitled to a 25-year lease extension. The extensions would work under the terms of the existing agreements.

While Smith, the city councilman, did have concerns with the campground property being leased for another 25 years if the sale is nixed, he acknowledged that the agreement would continue the parcels’ current use, something that he wants rather than, say, a high-rise resort being built.

City councilman John Krajc had some concerns as well, but he also voted in favor of the sale.

“I understand that we have some curveballs because of our friends on the other side of the waterway,” he said, “but a real estate transaction of any kind has risks.”

An email to an Horry County spokeswoman asking about the county’s intentions was not immediately returned Tuesday afternoon.

However, Gardner, the county council chairman, has said, “We’re going to do what we can do legally to protect that property so that we can protect the airport.”

“The airport’s important to Horry County,” he said.

Seems to be another money grab from the City of Myrtle Beach. There needs to be open disclosure of the buyers.

This sounds like a sweetheart deal for ones who are leasing the land from the city. Owning prime oceanfront land and after 5 years ,doing whatever you like with it. These deals don’t happen very often. Sign me up.

I think every resident of Myrtle beach that lives outside the city limits, should join a class action suit against the City of Myrtle Beach to recover hospitality taxes and and other taxes imposed on them in receipt of nothing. Next they will want to annex everyone outside of the city limits to impose taxes on us and still offer nothing. It's taxation without representation.