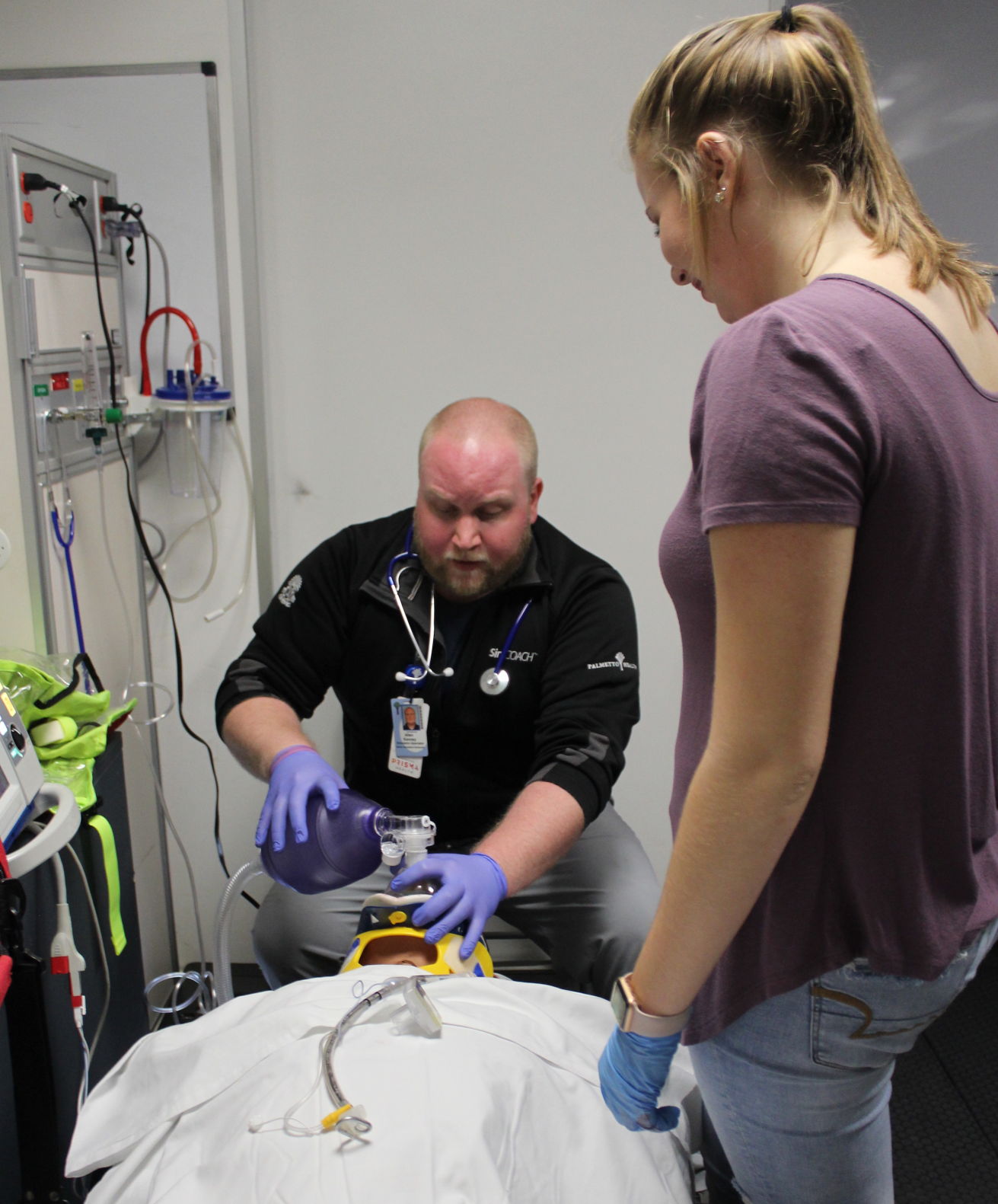 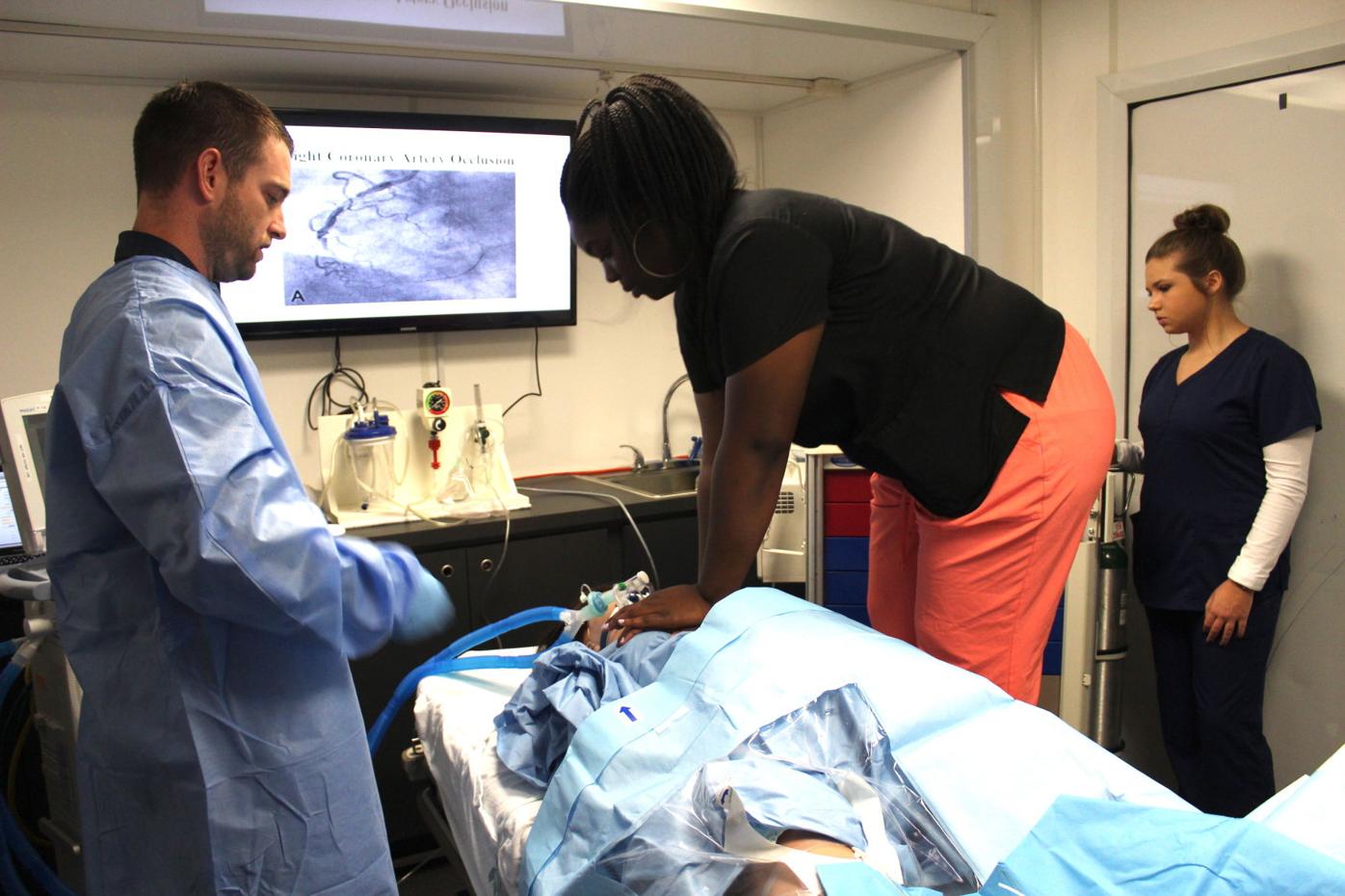 Some Conway High School students got to work hands-on trauma and cardiac emergency simulations this morning, thanks to a visit from Palmetto Health’s SIM Coach mobile training unit.

Teachers Lucia Watson and Jonathan Tedeton-Johnson were excited for the opportunity to have the SIM Coach at their school, which was the first time the mobile simulation van visited a school in Horry County. Watson previously used some of Palmetto Health's videos in class, and gave feedback online about a recent video. Thanks to her feedback, Palmetto Health offered to come to CHS.

“We’re pretty thrilled,” Watson said. “Lots of students will get to be involved today.”

Tedeton-Johnson said that the simulations were so good, some of the students were a little bit overwhelmed.

Based in Columbia, the unit provides mobile trauma, cardiac and childbirth situations for training at hospitals, so they don’t have to send their employees across the country for training. A lot of their work is training birthing centers in the state to improve the state’s maternal mortality rate.

Tedeton-Johnson said he learned that the United States was one of four countries in the world whose maternal mortality rate is increasing.

“The others are Syria, Libya, and Afghanistan,” Tedeton-Johnson said.

While CHS only participated in the trauma and cardiac simulations today, SIM Coach Coordinator Hannah Sheeley said that their childbirth simulations are very realistic.

“[The simulator] blinks and breathes,” Sheeley said. “It even can simulate breech births and postpartum hemorrhaging.”

The mobile unit is divided into two simulation rooms, which hold around 10 people each. The students are able to split their class time between the two simulations.

Allen Kenney, a SIM Coach trainer with a background as an emergency medical technician, got the students pumped up to work quickly to save a man (simulator) that was involved in a car accident and was thrown from the vehicle.

“Oh!” exclaimed student Parris Todd, as she pulled back the sheet on the simulator’s leg to reveal a bloody leg injury which she was instructed to tourniquet to stop the bleeding.

While Todd and Kenney worked to save the trauma patient, trainer Glen Miller talked the other students through how to deal with a right coronary artery occlusion, or a blood clot in an artery of the heart.

The students learned about the importance of angiogram and echocardiogram details in determining in which area of the heart the clot may be located.

Student volunteers Celina Brown, Halle Chadmon and Zoe Lewis worked together to perform CPR on the patient simulator. The class learned what drugs to give in the situation, as well as how those drugs worked.

Watson said that while their simulations today might be a once-in-a-lifetime opportunity for today’s students, she hopes in the future they may be able to have the SIM Coach back for other classes. Watson said that the skills they learn in the unit fits into their curriculum involving technical skills and teamwork.