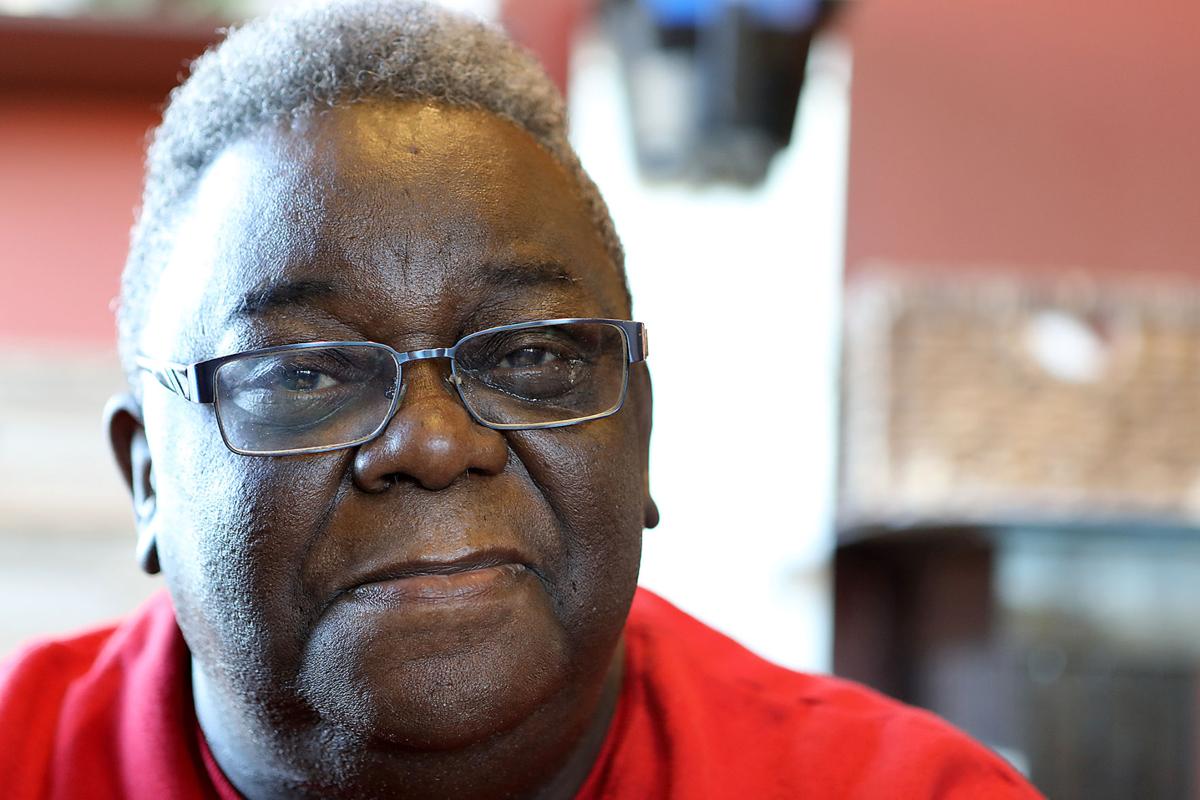 "There's been a devil in the works. There's been an effort to divide based on race, based on economics, based on party. We can't have that," Bennie Swans said gearing up to the 12th annual Freedom Rally in 2018. The rally is a four-day celebration in honor of Dr. Martin Luther King Jr. Activities include a film festival, an economic development summit, a worship service, the awards banquet and the parade on Ocean Boulevard in Myrtle Beach. 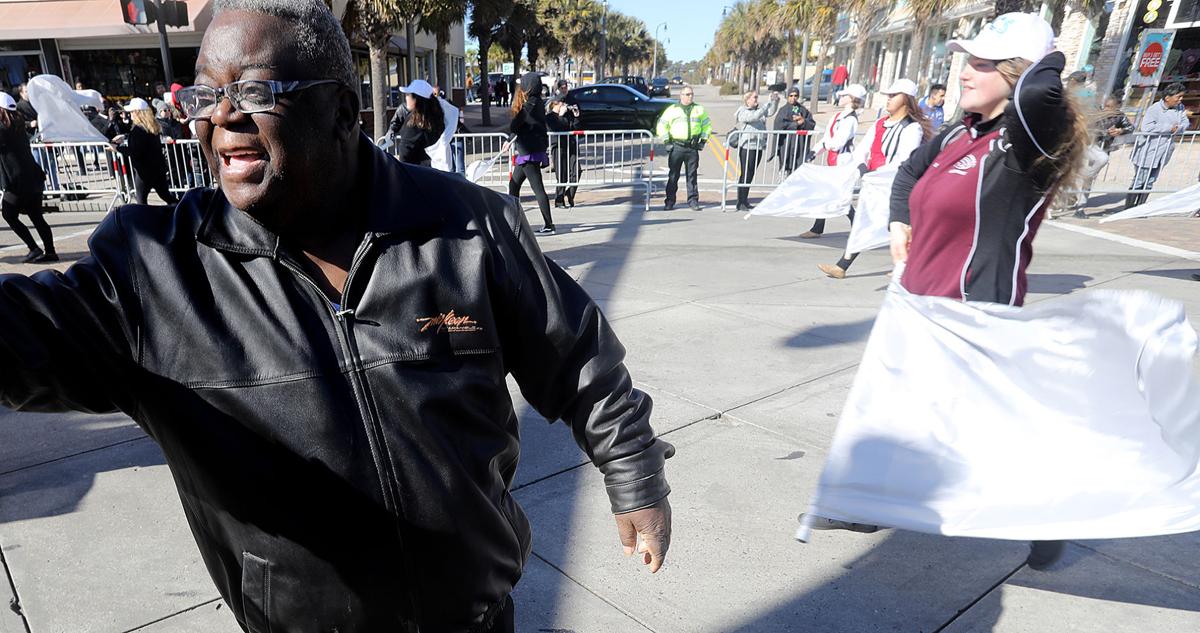 Bennie Swans smiles as the Horry County Schools All Star Marching Band marches by on Ocean Boulevard during the annual Dr. Martin Luther King Jr. Parade on Monday, Jan. 15, 2018. All the county schools are represented in the 500-member band.

Bennie Swans was in the business of inspiring others.

That was evident in the Myrtle Beach Convention Center Friday where loved ones and others came together to honor the late community leader and activist. There, they gathered for prayer and to share memories during a memorial service. Local leaders honored Swans as a trailblazer who worked to spur community togetherness in the area and other places where he lived for many years.

“He wouldn’t let a moment go without uplifting you,” said John Bonsignor of his friend.

Swans died Saturday after battling a lengthy illness. He is survived by family members including his wife Marcella, three sons, a sister and multiple grandchildren and great-grandchildren. Swans was 70 years old.

“Whether you agreed with him politically or not, you respected him,” said Trey Paul with WPDE-TV. “At the end of the day, he wanted the same things we all want, and that’s to be heard and understood.”

Swans was chair of the Horry County Democratic Party from 2016 to 2018. Party leaders said his efforts helped prompt the HCDP’s resurgence in recent years.

During his time in the Myrtle Beach area, Swans chaired the Carolina African American Heritage Foundation.

He rallied against local violence, lending his help during the creation of the organization South Carolina Mothers Against Violence.

They were with others in the Myrtle Square Mall food court talking about issues facing the community.

When times were tough, he added, Swans was there for him, lifting him up all the while. Looking into a crowd and not seeing folks who looked like himself was hard.

“This man would encourage me to keep moving forward,” Chestnut said. “This man was what a true friend really is.”

Swans also wanted to help the younger generation stay on a positive path.

“[He] was about trying to encourage young folks to stand up and do the right thing and be an example,” Chestnut said.

Over a decade ago, Swans developed a close friendship with Bonsignor.

Both of them even helped found the Grand Strand Community Law Enforcement Appreciation Committee that aims to strengthen bonds between police and the public.

Swans felt discrimination has no place in society, according to his friend.

“Bennie fought very, very, very hard to wipe that out,” Bonsignor said. “He wanted to erase it.”

But more than that, Swans was a man of faith. A caring friend. Someone devoted to his family and who taught them the importance of unity and sticking together.

“He made me a better person,” said Christel Bell, a former anchor for WMBF News. “He loved the community, he loved people and you heard it every time he spoke.”

Long before he moved to Myrtle Beach, Swans fought during the Vietnam War, earning three Silver Stars, two Bronze Stars and a Purple Heart before he was honorably discharged. Swans’ burial and a private graveside service at the Florence National Cemetery followed Friday’s convention center ceremony with full military honors.

Swans was also a longtime resident of Philadelphia, Pennsylvania, before his time on the Grand Strand.

He was a volunteer with the Safe Streets Initiative and eventually became its director.

Swans also helped started The Crisis Intervention Network as he worked to fight against gang violence, uniting folks from different backgrounds for crisis teams that mediated disputes with rival gangs. The program’s model spread to other big cities.

Before relocating his family to Myrtle Beach, he lived in Kingstree for a couple years where he was involved in the Salters Prison Project that helped create jobs in the region for minority contractors.

The Rev. Tim McCray described Swans as a father figure.

“He cared about you,” he said.

It was decades ago when McCray first heard the name Bennie Swans — McCray was in New York City at the time — amid gang activity on the East Coast.

Back then, McCray never thought he’d end up moving to Myrtle Beach and meeting Swans more than 19 years ago.

“He’s been my hero ever since,” he said.

McCray and others remembered Swans as passionate.

“He would call me … and say, ‘Tim, you’ve got to do something!’” McCray said. “Sometimes I wanted to give up. I wanted to run and leave and go back home.”

“Bennie didn’t stop encouraging people, even until the end,” Chestnut said. “That was Bennie.”

"There's been a devil in the works,” he said in 2018. “There's been an effort to divide based on race, based on economics, based on party. We can't have that."

The Swans were the driving forces behind the annual Martin Luther King Freedom Rally events and parade in Myrtle Beach.

“It started out small, and now it is one of the biggest events we have here in Myrtle Beach,” Bonsignor said.

“Bennie has passed the mantle to us,” he said.

And as the city continues to celebrate Freedom Week year after year, it’s one way Swans’ legacy remains.

The marathon goes on.