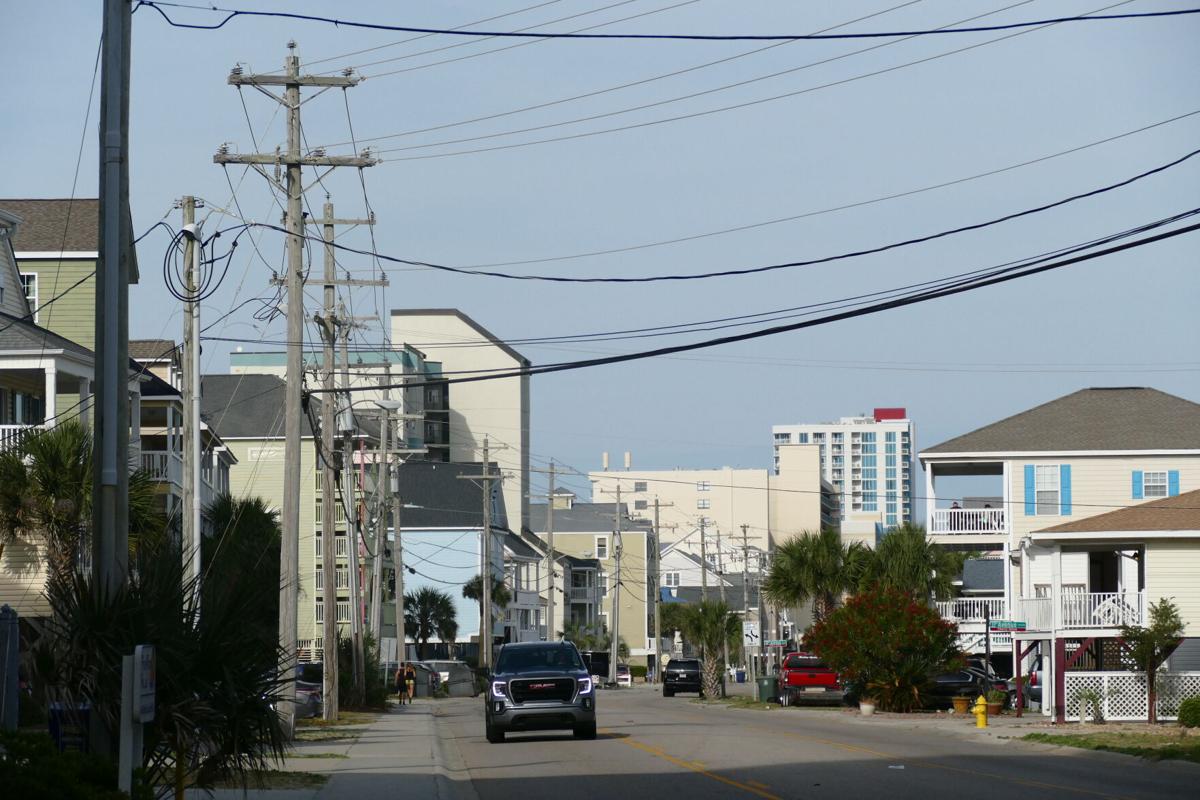 The city of North Myrtle Beach plans to spend $1.75 million to bury utility lines in Cherry Grove from 29th to 34th avenues north in Cherry Grove. Photo by Christian Boschult 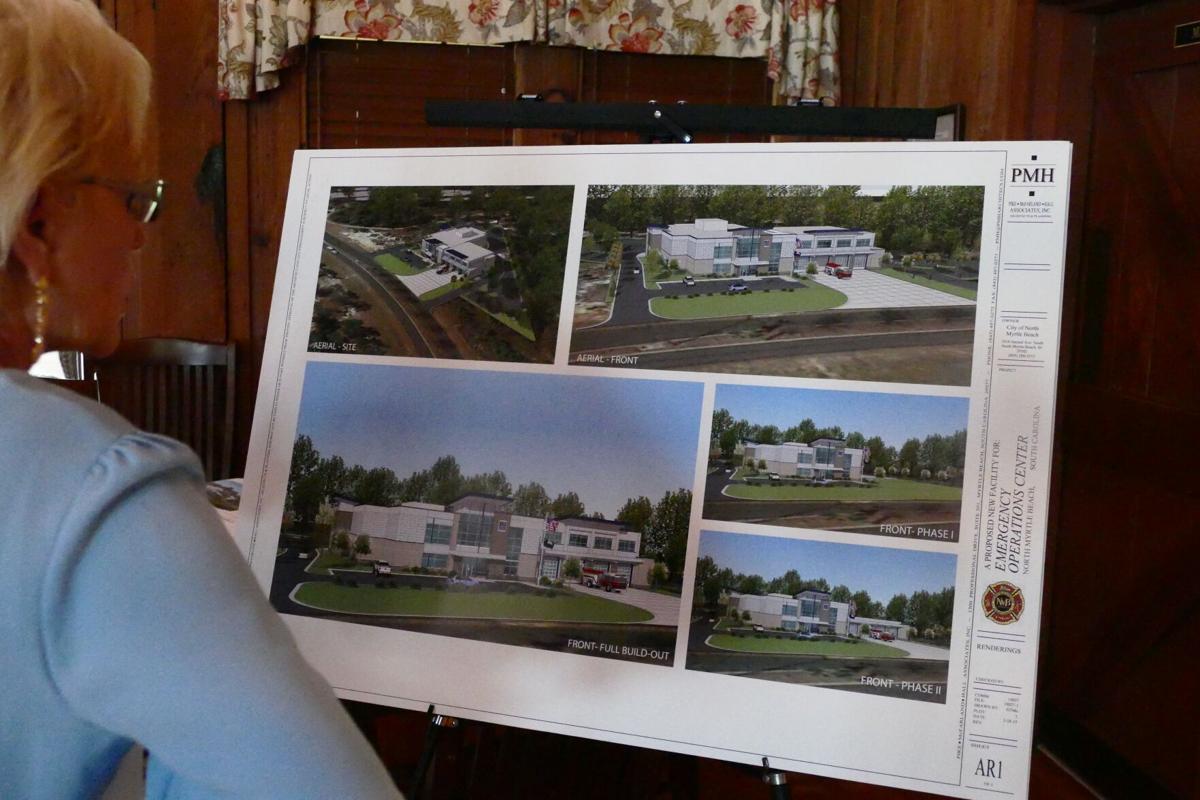 North Myrtle Beach Mayor Marilyn Hatley looks at plans for the city's new emergency operations center and data center. This year, the city is funding $8 million of the roughly $11.7 million cost. A fire station and training facility, which will cost more money, will be build when there's demand and the budget allows for it. Photo by Christian Boschult

North Myrtle Beach’s budget proposal of $122.6 million includes several capital and infrastructure projects that were in last year’s budget but delayed because of COVID-19.

The proposed fiscal year 2021-22 budget, made up of 17 different funds, has an end-of-year balance of $43.7 million. It funds 433 full-time employees and adds no new positions, although the city currently has 35 budgeted positions that aren’t filled.

The city’s general fund is $43.1 million. The ending balance is projected at about $13 million. There are no new tax increases.

The city also plans to issue $31 million in general obligation bonds to help pay for the EOC and the $36 million it will cost to build new facilities in 96-acre sports park expansion property that the city bought in 2019. The city plans to spend $21 million on the park this fiscal year and $11 million in FY23.

During the city's budget retreat Monday, Finance Director Randy Wright said $25 million of the bonds will go toward the park and $6 million to the EOC. The city doesn’t plan to issue the bonds until it has a cost estimate for the park expansion, Wright said, but he added there’s enough funding in the budget to start construction on the projects this fiscal year before the bonds are issued.

“The thing is you have to get a better bid, then you have to have a real concise report, a cost estimate, to go out and issue debt,” Wright said. “We do have that now from the EOC, so we know what’s that going to cost. And since we’re only borrowing $6 million out of the $11 million, $12 million we’re going to spend, that’s not a problem, because you’re only borrowing a portion of that.”

The EOC and data center

Located on Champions Boulevard across from the back entrance to the city’s park and sports complex, the new emergency operations and data center will serve as a base for city officials working during hurricanes.

Right now, the city uses the training room in the fire station across from city hall, but that facility isn’t designed to withstand major hurricanes.

“We currently have our EOC in our fire training room in Station 1,” said Fire Chief Gary Spain. “Once we move to a Cat. 2 Hurricane or above, we’re going to have to move our resources.”

The new EOC and data center will be designed to withstand a Category 5 hurricane and house crews for an extended period of time during natural disasters. It’ll even have showers.

“We’re running out of space. The buildings we have will not hold up in a Cat. 5 [hurricane]," said Mayor Marilyn Hatley. "So we need to secure and build a space that is strong enough to withhold a Cat. 5 and also a place that we can keep our database safe. The database is the most important."

The new building will function first as the city’s backup data center and later become the primary data center.

“It’s something really important for us to maintain our data,” Wright said, citing the recent Colonial Pipeline shutdown and other hacks of local governments. “You’ve got to try and protect our data as much as possible. It’s not if we get hit, but when we get hit.”

The city is planning to budget $8 million in FY22 and $3 million in FY23 to pay for phase I of the center, which will include the data center and EOC. The cost estimate for the first phase is $11.7 million.

If all goes to plan, Spain said, the city could start construction on the EOC later this year.

Phases II and III of the EOC, which include a fire station and training facility, will be built later according to demand and the city budget.

After decades of prohibition, could North Myrtle Beach's oyster beds reopen for harvest?

The NMB Park and Sports Complex

The 96-acre sports park expansion along Champions Boulevard will increase the size of the attraction to about 257 acres. Facilities in the new property will cost the city about $36 million over two years and include a splash pad, an arcade with 45 games, six new ballfields and five new soccer fields. It’ll give the park 13 soccer fields and 12 ballfields.

The city estimates the operational costs for the expansion will be $2,537,879 per year and the revenue at $2,583,516. The city already generates revenue with the park and that trend would continue with the new additions.

The project will let the city turn the two-mile light show route into a three-mile route with room for an additional 110 cars to stack up on Champions Boulevard.

“It’s very exciting,” said Parks and Recreation Director John Bullard. “I think it presents many new opportunities for us to attract tourists and to provide services for our locals.”

Bullard said the city plans to bid out the projects in September, and if the bids are in line with the city’s projections, construction could start early next year. If not, he said, the city may choose to postpone the projects.

The city is budgeting $1.75 million this year to bury utility lines in Cherry Grove along Ocean Boulevard.

“Primarily it’s for faster recovery from storms, so if a storm comes through, they’re not blowing the lines down, they’re not having to install a brand-new overhead system,” Blayton said. “So they can get the water out of the underground system, turn the equipment back on and they’re typically good. The side benefit is aesthetics, they just look better; they look cleaner.”

Included in the FY22 budget is $9 million for a new ocean outfall at 18th Avenue North and $5.5 million for the outfall next year.

The two-year project is designed to reduce flooding in the area, and send stormwater a quarter-mile off shore where it will discharge at about 22 feet below the surface of the ocean, sending bacteria away from the swim zone and hopefully lowering the frequency of DHEC beach closures.

The outfall will replace state Department of Transportation pipes and will collect water from 14th to 23rd avenues north, said city spokesman Pat Dowling. It should reduce flooding along 11th Avenue North and along Ocean Boulevard between 18th and 20th avenues norths.

Blayton said the pipe will also tie into ponds on Springland Lane and the ponds at the condo complex on 18th Avenue North.

“That will help for the water that comes out of the golf course pond and flows through the middle of that condo project,” Blayton said. “If you’ve seen it during a storm, it runs out of their driveway and into the median between 18th north and Shorehaven Drive and fills up the road. That pond is pumped by the golf course irrigation system all the way to 20th Avenue North where it has outlet to Cherry Grove marsh and Sea Mountain Highway. So this should alleviate flooding on that end of Cherry Grove as well as flooding on Ocean Boulevard between 18th and Shorehaven.”

Blayton said the city has roughly a half-dozen more it would like to build at a rate of about one every five years.

The work will start in the fall and last a year-and-a-half, Blayton said. Work will be done on the beach and in the ocean.

“The last one we did, they finished all of the work in the summer but we’ve had other contractors finish all the work before the summer because they’re only allowed to put a work trestle on the beach from September through the end of April,” Blayton said. “So before the end of April, they have to remove all equipment and all temporary shoring from the beach and do the remainder of work from a barge. So that’s their economic incentive to finish the work while they have access to the trestle.”

“One way or another we’re going to get this parking under control."

Facebook on Friday announced that it may allow former President Donald Trump’s Facebook and Instagram accounts to be reinstated in January 2023. At that time, the social media company will re-evaluate whether the risk to public safety of allowing Trump back onto its services has receded. This two-year suspension will prevent Trump from using Facebook or Instagram to broadcast to his followers until after the 2022 U.S. midterm elections. Do you think tech giants like Facebook are using their power to censor political speech and manipulate U.S. politics? Choices are: