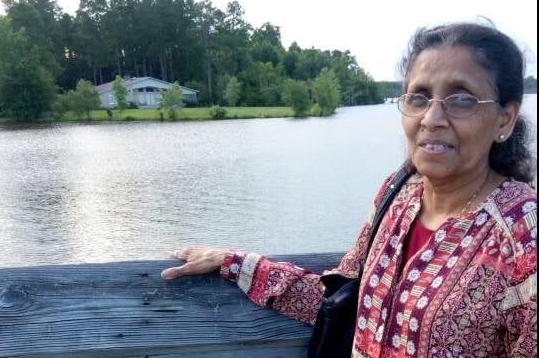 Neela Dave suffered multiple injuries after a portion of U.S. 701 collapsed and she drove into the hole. 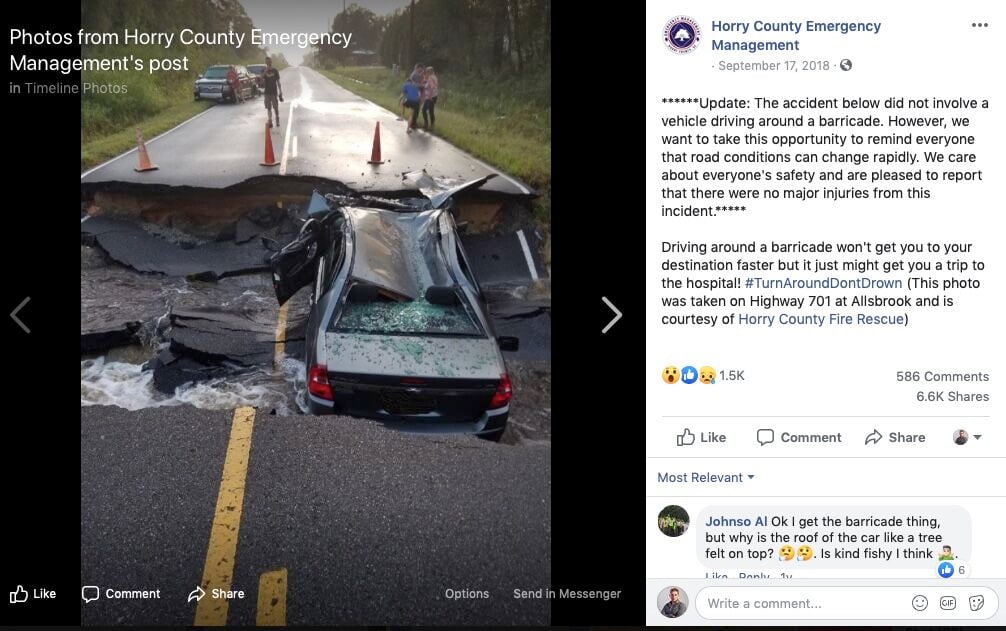 Horry County Emergency Management posted a picture of Neela Dave's car in a ditch following Hurricane Florence, with a caption implying she drove around barricades. A Chevy Avalanche also ran onto the ditch and over Dave's car, denting the roof. The post was later updated.

Witnesses said there were no barricades warning Neela Dave of impending danger when she drove her car into a gaping hole in Highway 701 in September of 2018, after a deluge from Hurricane Florence caused Cane Branch stream to wash out the road.

Her injuries were severe enough to require hospitalization and surgery.

On May 18, Dave filed a suit against Horry County, its emergency management department and the South Carolina Department of Transportation for negligence and recklessness.

She’s also suing the county and its emergency management department for defamation after Horry County Emergency Management posted to the internet a picture of Neela’s battered vehicle with a caption implying she drove around barricades, according to the suit.

But Dave never drove around any barricades, which hadn’t been set up in front of the ditch in the road when the wreck sent her to the hospital, the suit said. Neither did a Chevy Avalanche that also ran into the washout and over Dave’s car, MyHorryNews reported at the time.

Loris area woman survives after driving into hole caused by collapse of U.S. 701

The county and SCDOT both declined to comment, citing ongoing litigation. Dave’s attorney did not respond to emailed questions and a phone message.

Dave, who lived on Ole Maple Street near Allsbrook, left her home shortly after 5:30 a.m. on Monday, September 17, 2018. She drove north on Highway 701 and was heading to work in Loris when she drove into the washout.

The complaint alleges negligence and recklessness by the county and SCDOT, citing the departments’ duty to citizens to protect them from hazards on the roadways of which the departments have “actual knowledge.”

The suit says officials knew of the danger and had closed the road by placing barricades on Highway 701, away from the collapsed asphalt. But it says there were no barricades between Maple Street, which intersects Highway 701, and the crumbled asphalt.

MyHorryNews also reported that there were no barricades in front of the washout at the time of the accident, citing witnesses who arrived at the crash site shortly after it occurred.

Dave’s complaint said her injuries caused her to “endure physical pain and suffering, to suffer mental anguish and emotional distress, to lose enjoyment of life, to suffer impairment of health and bodily efficiency, to lose wages, and to incur medical expenses.”

The suit also accuses the county emergency management department of posting a picture of Dave’s car to the internet with a statement that “improperly attributed the plaintiff with encountering and wrecking into the washout by driving around barriers.”

Following Dave’s trip to the hospital, Horry County Emergency Management posted to its Facebook page a picture of her bashed-in car with the caption “Driving around a barricade won’t get you to your destination faster but it just might get you a trip to the hospital! #TurnAroundDontDrown.” The suit doesn't explicitly mention the Facebook post.

The suit says the county’s statements were false “and were allegations that the Plaintiff had committed a crime.”

The statement subjected Dave to “public contempt, ridicule and obloquy,” the summons says, adding that “the publication and statements were seen and further disseminated by a number of news organizations.”

MyHorryNews did not report that Dave had driven around barriers.

The department’s Facebook post, which as of this writing had more than 6,000 shares, was later updated to clarify that “the accident below did not involve a vehicle driving around a barricade.” It’s unclear when the post was updated.

Dave is asking for unspecified actual and compensatory damages to be determined by the court.