A Little River resident on Tuesday filed a lawsuit asking a court to review the process that led to Horry County Council’s first two votes of approval to rezone a piece of property between Coquina Harbor and Highway 17 that would allow a 12-story high-rise.

Katrina Morrison, who has a law degree but isn’t a member of the South Carolina bar, filed the suit on behalf of herself and other similarly situated plaintiffs against Horry County Council and Horry County Planning Commission.

“The lawsuit is about being more transparent with the way things are handled with the planning commission and Horry County Council,” Morrison said.

In 2005, a company called Coquina Harbor Resorts, LLC, was preparing to build a 180-foot high-rise on a plot of land in Little River, when Horry County Council passed a set of zoning ordinances that reduced the height of any building in that area to 60 feet, save for those within a planned development district.

Morrison’s suit alleges the county never should have entered into that agreement because "directing a public regulatory agency to afford special privilege to a private company or individual" violates the separation of powers doctrine of the United States and South Carolina constitutions.

Coquina Harbor Resort never submitted the plans pursuant to the consent order, and CHR, LLC, bought the property at a public auction in 2013.

In May 2021, CHR, LLC petitioned for a rezoning of the property in question and an adjacent lot from Highway Commercial and Resort Commercial to a Planned Development District, which is the only zoning in that area that allows a building up to 120 feet in height.

The attorneys for the landowner who owns CHR, LLC, also represented Coquina Harbor Resort in the 2005 lawsuit. Attorney George Redman with the Bellamy Law Firm at the May 6 planning commission meeting told commissioners that they were bringing the rezoning to comply with a court order mandating that the height of a building there would be 120 feet, although CHR, LLC was not a party to the agreement which allowed the previous owners to submit plans of up to 120 feet.

Morrison argued in her lawsuit that even if the consent order was valid, it only allows an applicant to submit plans for up to 120 feet, but it "does not compel any action on the part of the county," the suit says. "It in fact simply permits the submission of an application of plans, those plans held to the same standards as any other application."

However, commission chairman Steven Neeves, citing the consent agreement, said he didn’t see how he could vote against recommending the rezoning to county council. The planning commission, with the except of Pam Dawson, followed his lead.

“The May 6 planning commission meeting turned into an adjudication of legal matters, where Chairman Neeves is constantly stating that he only objective of the planning commission is to address the technical assessment of the application, when in fact throughout that meeting… he allowed during the entire time the adjudication of legal matters,” said Morrison, who filed an injunction asking a court to review the audio from the meeting. “And I don’t think that is correct, I don’t think it’s appropriate and I don’t think it’s constitutional, and as a result, this lawsuit has now been filed.”

Neeves did not immediately respond to request for comment.

But the rezoning is not popular with residents in the area, and county councilors have received hundreds of emails asking them not to approve the rezoning request.

“It’s going to cause big issues; we have traffic issues now without that building being there. It’s busy all the time, especially the summer,” said Lyn Somerville, the president of one of two HOAs in Lightkeepers Village.

Somerville also said she was concerned about runoff into coquina harbor, and the amount of people who would take advantage of the boardwalk around Coquina Harbor if the high-rise was built, resulting in potentially more than 300 residential units on the site.

“We have a very lovely boardwalk around coquina harbor that is maintained by the homeowners associations,” Somerville said. “We’ve got enough people that drive in here to walk it. I can’t imagine the mass of people that would be walking it every weekend. My back porch is 10 feet from that boardwalk, so the thought of having throngs of people walking is scary.”

While councilors Harold Worley, Al Allen, Gary Loftus and council Chairman Johnny Gardner voted against the rezoning on second reading, the rest of council voted for it, except for Tyler Servant who wasn’t at the meeting.

“What bothers me is this consent order was made with another developer,” Somerville added. “Fifteen years have passed. They don’t seem concerned with how much the county and Little River have changed in 15 years. It was a sleepy little town 15 years ago, there was not much here so I don’t understand their thinking.” 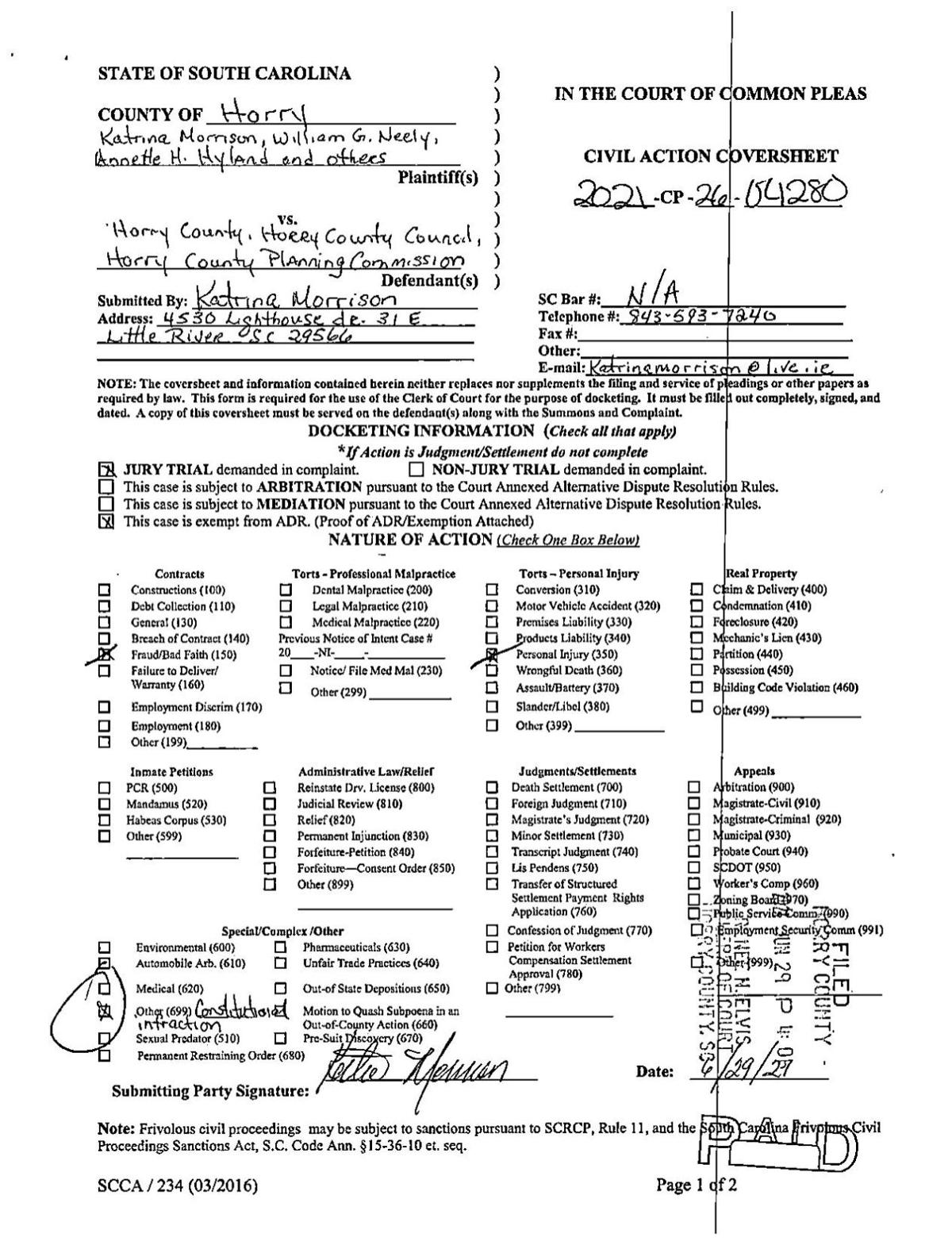 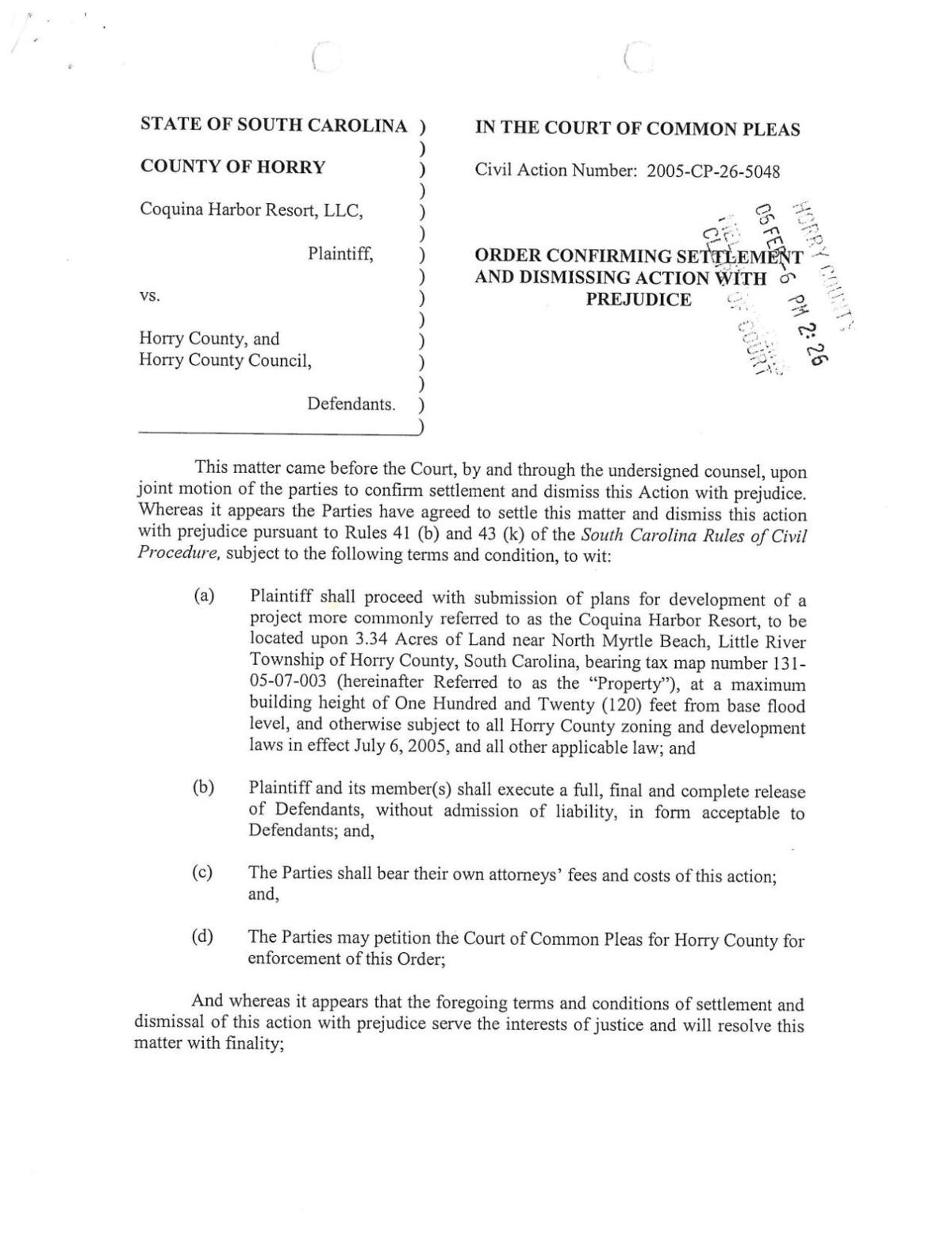 Against the pleas of Horry County Councilman Harold Worley and the residents of his district, county council on Tuesday approved third reading…