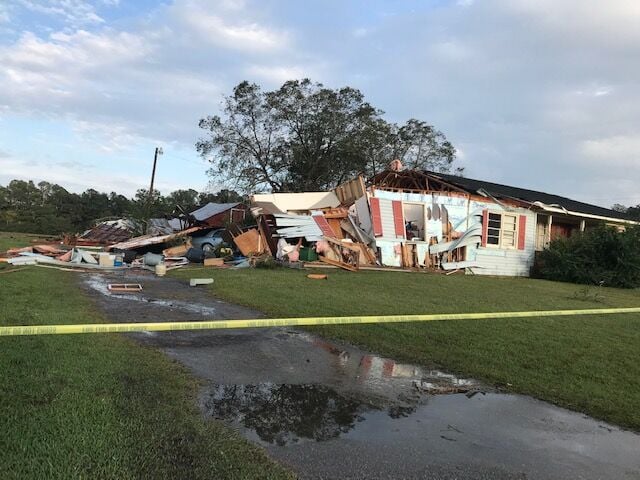 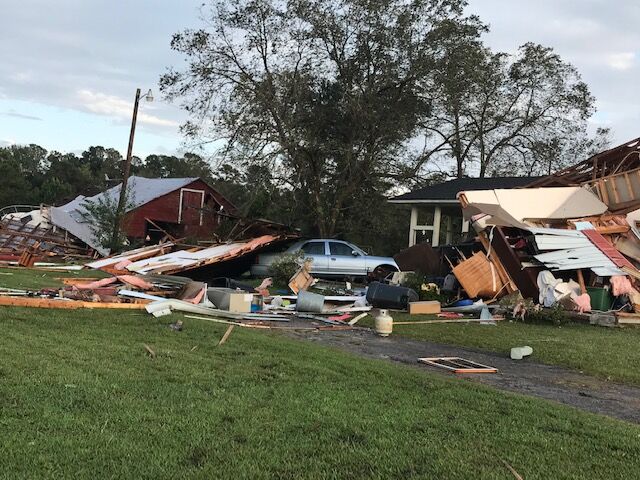 Ginger Tyler escaped her den just before a tornado flattened it.

The 72-year-old had been flipping between weather reports Sunday afternoon watching for updates. Earlier tornado warnings had been issued for Dillon County and northern Horry, but she tuned out when things seemed calm at her house on Oak Street just outside Conway.

She was about to doze off in her chair around 4:30 p.m. when she noticed debris whirling outside. Then she heard something pelt the house. She got up, grabbed her dog and headed for a back bedroom.

“As I got up, some of the glass blew out of the windows,” she said. “I haven’t run that fast since I was in high school.”

In a matter of seconds, the storm reduced her den to a pile of mangled boards, insulation and siding. Part of the house sat on top of her car.
But Tyler's quick thinking saved both herself and her dog, a Jack Russell-Chihuahua mix named Saul T. Dog.

“It’s going to be a pain in the behind to deal with,” Tyler said. “But that beats being laid up in the hospital for months.”

Steve Pfaff, a warning coordination meteorologist with the NWS in Wilmington, said the tornado formed in the fields north of Cultra Road before striking Tyler's house, uprooting some trees in the woods and dissipating near Brown Swamp.

Tyler has lived in the brick house with pink shutters on Oak Street since 1971, the year after she got married. The den had at one time been a carport, but she and her late husband enclosed it after Hurricane Hugo hit in 1989. It was his favorite room in the house.

The main part of the home is still standing. Tyler has insurance and her daughter lives nearby and is helping her. Other than being terrified and unhappy with the firefighters who tried to rescue him, Saul T. Dog — the “T” stands for Tyler — is fine, too.

“I praise God that I’m OK,” Tyler said. “Right after I got up, pieces of the ceiling fell down right on top of that chair.”