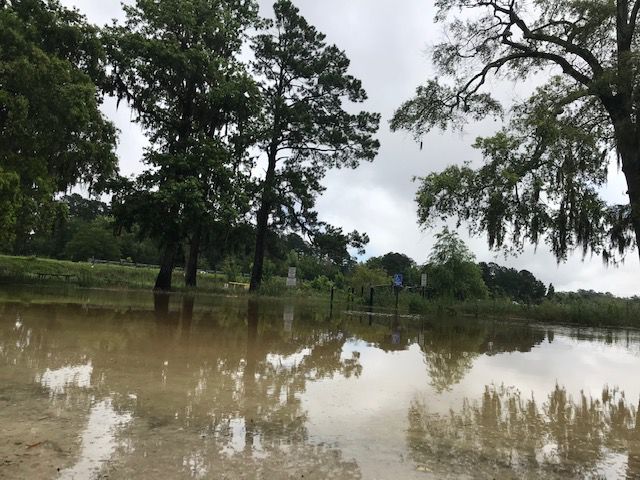 Floodwater covers some of the recreation area near the former Lake Busbee site beside U.S. 501. 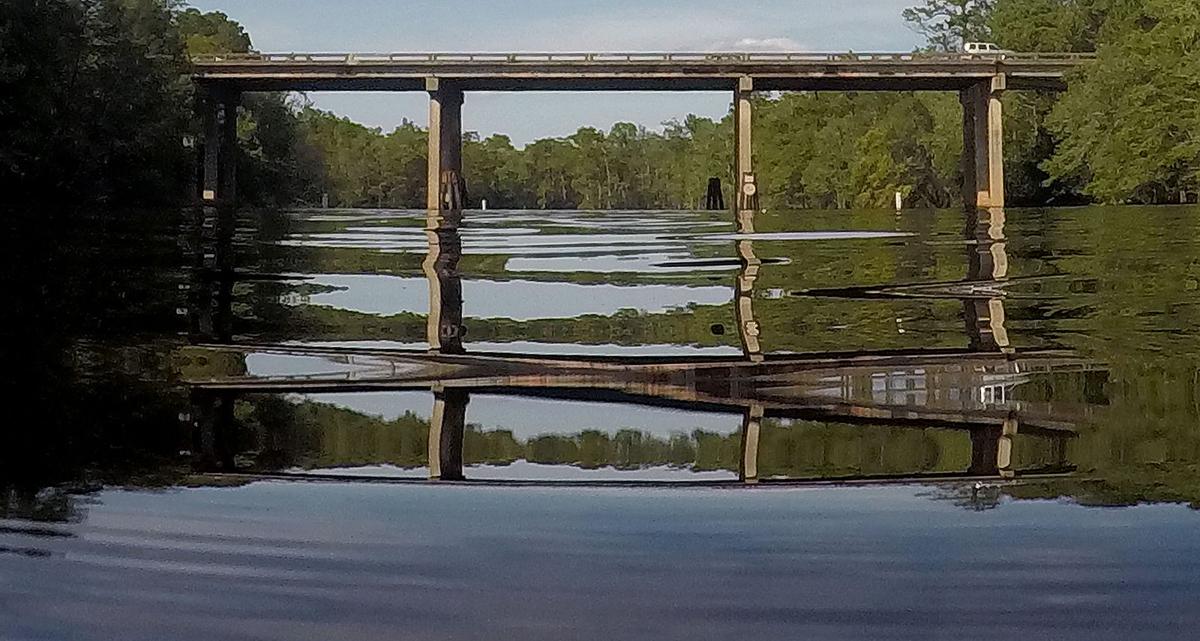 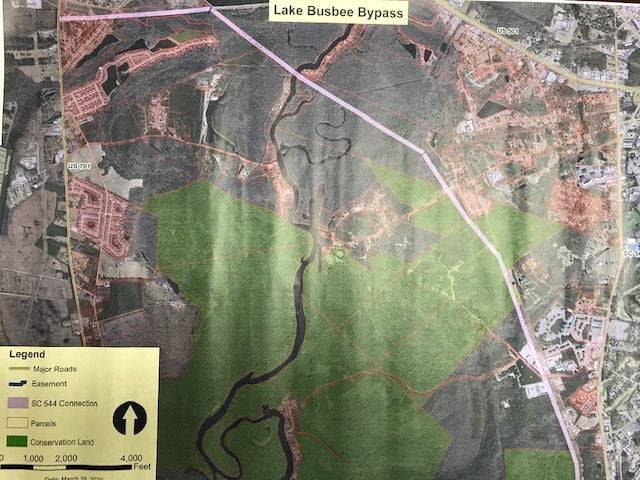 This map of the proposed Busbee Bypass route was prepared by Horry County Government.

Floodwater covers some of the recreation area near the former Lake Busbee site beside U.S. 501.

This map of the proposed Busbee Bypass route was prepared by Horry County Government.

Constructing the Busbee Bypass would cost between $172 and $228.5 million, according to the latest estimates from Horry County Government.

Designed to connect S.C. 544 with U.S. 701 South in Conway, the proposed road and bridge project would provide another route over the Waccamaw River. The road’s proponents have not identified a funding source for the project, but they plan to present the latest estimates to the Horry County Legislative Delegation.

“We’ve got to have some help from the state, whatever we do,” said Horry County Councilman Johnny Vaught, one of the project’s supporters. “[With] all of the paralysis actually that it will prevent — it’s a very worthwhile project.”

The idea for the bypass emerged from the flooding of Hurricane Florence in 2018. During that disaster, state and federal officials built emergency dams along U.S. 501 near the Waccamaw River to keep water off the highway. Flooding cut off other major routes, including S.C. 9, S.C. 905 and S.C. 22.

“There’s no question,” he said. “We need another way over the Waccamaw River.”

In the aftermath of Florence, state and local leaders began discussions about raising the roadbed of U.S. 501 near the river. The state Department of Transportation (DOT) even sought federal funding for an $11.6 million project that would have raised the road by two feet. The funding would have also paid for studies looking at the benefits of placing culverts beneath road to allow floodwater to move through the area more easily.

But the grant application — the only one the DOT submitted for that type of funding — proved unsuccessful, said Leland Colvin, the DOT’s deputy secretary for engineering.

So rather than address U.S. 501 with one large project, Colvin said the DOT plans to make a series of smaller improvements, known as “hardening infrastructure,” to make the area more flood resilient.

For example, he said when that section of U.S. 501 is scheduled for repaving, DOT crews could add a few inches to the highway rather than simply mill the road and replace the existing paving.

Colvin did stress that the area remains a priority to the DOT.

“It’s something that’s still on the radar,” he said, noting that at some point the U.S. 501 bridge will have to be replaced. “We’ve identified that as one of our critical routes and one of our lifelines.”

Emrick agreed the 501 bridge will eventually need to be replaced, but he said that shouldn’t happen without another outlet in place.

“I do not see any ability to do a repair of that bridge without having another bridge first,” he said, noting the traffic would be overwhelming. “[It] would be catastrophic. It would take us back to the days of the flood.”

The bypass would essentially be an extension of the Conway perimeter road that’s part of the county’s RIDE III road construction program. It would run from U.S. 701 South across the river and join S.C. 544.

When Busbee Bypass supporters first presented their proposal to state lawmakers in October, legislators asked for more specifics. Some, including state Reps. Heather Ammons Crawford, R-Socastee, and Russell Fry, R-Surfside Beach, said they don’t want the bridge to compete with other proposed road projects, such as I-73 and the Southern Evacuation Lifeline (SELL). SELL is another bridge project that would link the South Strand with U.S. 701. Others, like state Sen. Luke Rankin, R-Myrtle Beach, support the idea.

But what was clear when state lawmakers discussed the issue last fall was that more details were needed.

That’s why Busbee Bypass supporters asked county staff to develop some initial estimates, which were prepared by the manager of the county's RIDE III program.

The bypass proposal calls for a five-lane road and a bridge. The bridge alone would extend nearly 1.6 miles and the entire project would be about 3.6 miles.

The estimates list several items as unknown, including wetland and utility impacts.

That’s an area where some conservationists would like to see more details.

Waccamaw Riverkeeper Cara Schildtknecht said the swampy ecosystems in that area need to be protected.

“To see it impacted at all would be devastating,” she said.

She said preserving wetlands and protecting the river are always concerns with any infrastructure project, but she noted one unusual aspect of the Busbee Bypass is that bypass supporters have been in talks with the Waccamaw National Wildlife Refuge about adding bike lanes to the proposed bridge. That could help establish a trail connection between Coastal Carolina University, the refuge and downtown Conway.

If the project used existing utility right-of-ways and minimized environmental impact, the bypass could provide pedestrian connectivity for bringing Coastal students to Conway.

“There’s so much potential in downtown Conway,” Schildtknecht said. “That would be really cool.”

Craig Sasser, the refuge manager, said connectivity is what he likes about the bypass concept. He's long advocated for trails linking the refuge and Conway.

"The main issue has always been, 'How do we get over the river?'" he said.

Since the bypass idea was first floated, he's been asked if the refuge's recent boundary changes were part of the plan for the road. He stressed there's no connection at all and the boundary modification was planned long before he heard about the bypass.

Sasser also noted that the design of U.S. 501 near the river is problematic because the height of the road forms an earthen dam, preventing the flow of floodwater.

"That's where you get a major bulge or spike in flooding," he said.

A longer bridge, he said, would allow a swollen river to flow more naturally. And if those building the bypass used existing utility right of ways, he said that would have less of an environmental impact than some of the other potential bridge projects.

"All that just adds up to a better alternative than some of the other ones people are looking at," he said.

Of course, paying for the project is another matter. The most expensive part of the project, the bridge, would cost nearly $143 million, according to the county’s estimates.

And the reason for the expense range in the entire project is that there could be overruns, say for construction or engineering.

Vaught said if the state won’t help with the project, supporters would likely have to wait until the next countywide road-building program, RIDE IV, which could delay the project for a decade or longer.

But if the bypass ever breaks ground, he said the project has an advantage.

“It will take a short period of time to do it because it’s all new,” he said. “We’re not going to have to shut down traffic or anything like that. … Once you get started on it, you can just rock and roll.”