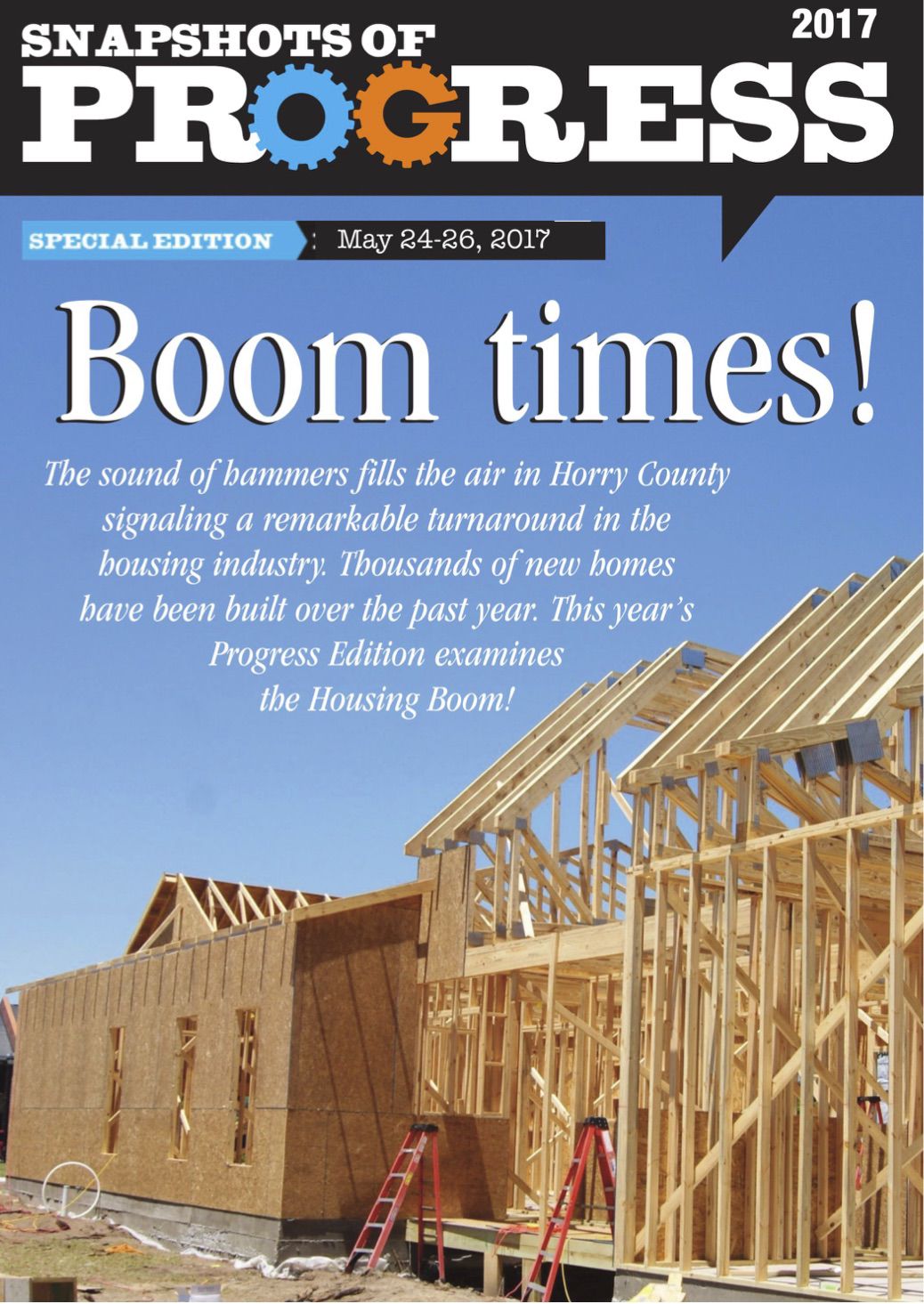 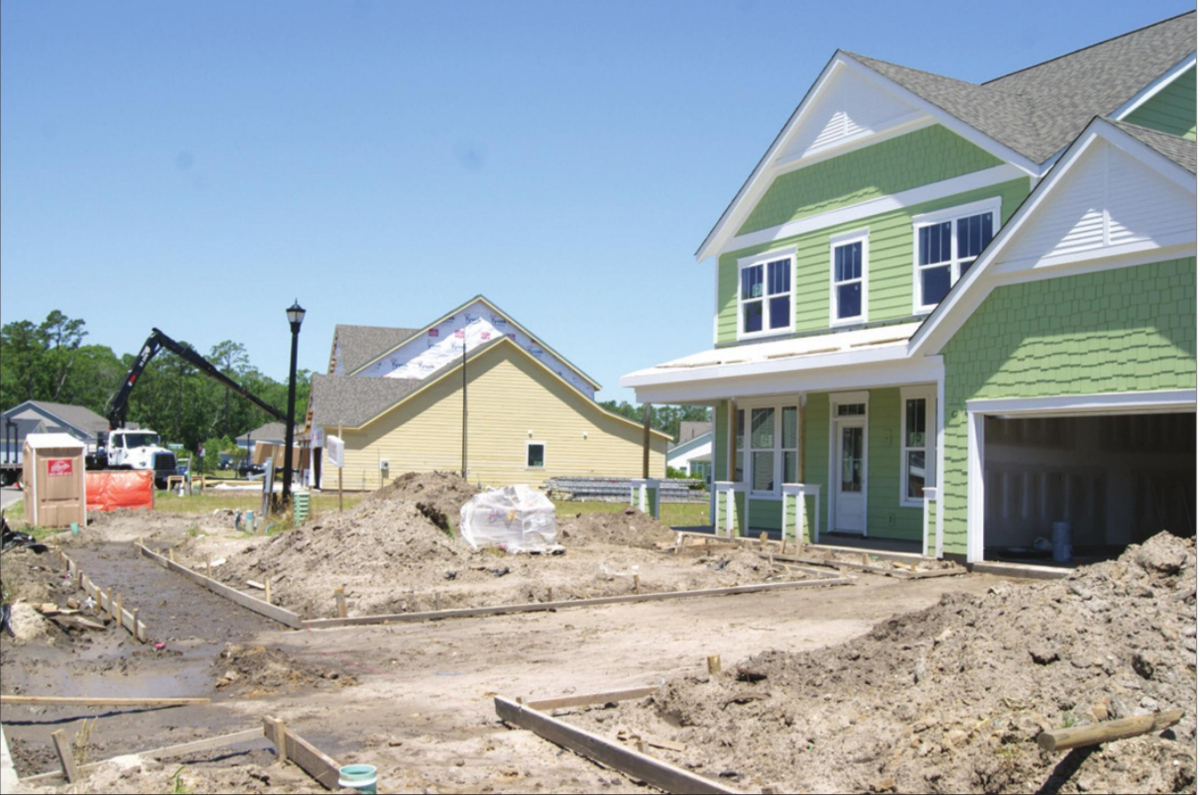 Several national builders are building massive subdivisions at the Market Common, but the trend continues even in rural settings in Aynor and Galivants Ferry.

Several national builders are building massive subdivisions at the Market Common, but the trend continues even in rural settings in Aynor and Galivants Ferry.

Residents and tourists in Horry County have probably noticed the sounds of hammers and new homes springing up seemingly overnight throughout Horry County.

The activity is part of a remarkable turnaround in the housing industry. The U.S. Census Bureau recently named the Myrtle Beach region as the second fastest growing metropolitan area in the United States.

That’s quite a shift from 2009 when the housing market in Horry County, like the rest of the nation, tanked.

Jamie Broadhurst, owner of Century 21 Broadhurst, said pent up demand is pushing the marketplace During the housing crash, many people were unable to buy a home. But interest rates have remained low and the economy has improved, making home buying obtainable again for thousands of potential buyers.

Michelle Duncan, a realtor with Berkshire Hathaway HomeServices, says one reason people decide to move to the Grand Strand is their desire to live in an environment more conducive to year-round living.

“When you look at those numbers, there’s definitely growth there,” said Duncan, “Prices are growing an understandable and reasonable rate.”

Not surprisingly, as real estate sales have increased, so have the number of people interested in becoming realtors.

“Since 2010, our membership has increased,” said Angela Fabbri, Director of Marketing and Communication of the Coastal Carolinas Association of Realtors. “Our [amount of members] has seen a steady, gradual climb to more than 3,500.”

Fabbri also accredited factors such as an improved economy with more jobs and lower mortgage rates as components that contributed to the county’s housing boom.

Local experts attribute the housing boom to a variety of factors, including the lower cost of living and pace of life in the Grand Strand as well as a demographic that includes retirees and migrants from parts of the country like the Northeast.

“What’s funny is that people start as vacationers here, and they end up buying homes,” said Penny Boling, Owner, President and Broker-in-Charge of Century 21 Boiling and Associates. “The lifestyle [here] is great.”

The Market Common area of Myrtle Beach is one such area that’s growing, with plenty of housing developments springing up within the past few years.

In addition to this, Del Webb is in the process of building 524 single-family homes as part of the Del Webb Myrtle Beach at Grande Dunes community for adults aged 55 and up.

The community, which will be located next to the Intracoastal Waterway, is set to be added to the Grande Dunes master-planned development, with the first phase of the neighborhood expected to open in February 2018.

Ashley Hanna, Area Sales Manager for the Lennar Corporation, says part of what makes Myrtle Beach desirable is its availability of land versus other coastal cities including Charleston and Hilton Head, adding that one reason property is selling so well is homeowners deciding to make purchases before an even further uptick in price.

“You’re looking at anywhere from a $15,000 to $20,000 price increase [for properties] year by year,” she said. “People are realizing prices are only getting higher so they’re choosing to buy now.”

Hanna also said for those that don’t wish to live right on the water, Conway has been a desirable area for potential home-buyers, adding that the farther away from the ocean one’s new home is, the more affordable price.

“The Conway market is growing, and there’s an increase in the price point,” Hanna said. “People are more interested in that lifestyle and smaller town mentality.”

Hanna also credited the “ridiculously low” property taxes for homeowners in the Myrtle Beach area versus set property taxes in states such as Florida.

Conway and Myrtle Beach aren’t the only areas seeing growth. Other parts of Horry County are also experiencing an upswing.

The Pageland Heights subdivision of Aynor has also experienced growth as well as the various parts of North Myrtle Beach and Carolina Forest.

Horry County Register of Deeds and former councilman Marion Foxworth also said that what’s driving the housing boom is people moving to the Grand Strand from all over the U.S.

“Overall what you’re looking is a long-term population shift that’s been going on for past 30 to 40 years…” he said. “As baby boomers get older and jobs dry up [in other parts of the country], you’ve seen a migration of people moving to the south and southeast from the West and Midwest.”