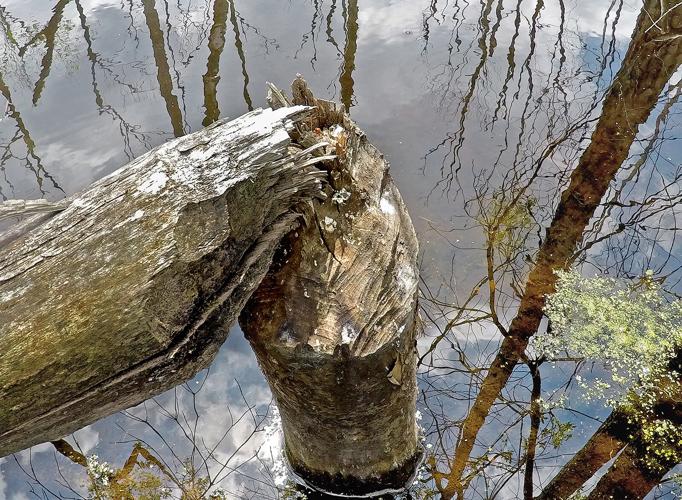 Beaver gnaw marks are seen on a fallen tree in a swamp off Gardner Lacy Road on Friday, May 7, 2021. Photo by Janet Morgan/janet.morgan@myhorrynews.com 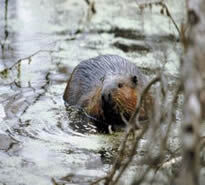 A $25 offer didn’t get Horry County any beaver.

County officials recently increased the price for a slain beaver after the initial bounty program yielded no success.

“Hopefully [we’ll] get some more action on the flooding issue by having more participants involved in it,” Horry County Councilman Al Allen said of the beaver program. “We’re hoping that’s going to make a difference with some of the flooding caused by the beavers. … They cause a lot of flooding in Horry County.”

The idea for a beaver bounty program emerged last year during the council’s budget retreat. The county spends more than $200,000 each year contracting with the U.S. Department of Agriculture’s Wildlife Services division to trap beavers and remove dams.

County officials frequently receive complaints about the large rodents. Beavers destroy timber and crops, and their dams send water into neighborhoods and occasionally wash out roads. The USDA’s nuisance beaver program in South Carolina was developed because of these problems in Horry County.

Initially, county leaders thought that a bounty program would be a cheaper alternative to working with the USDA. However, they now view the bounty program as supplementary to what the federal agency is doing. Statewide, the USDA estimates that its beaver program prevented more than $2 million in damage in 2020, including nearly $370,000 in Horry County.

County officials created the bounty program with the goal of persuading hunters to kill beavers for money, but they weren’t sure what to expect.

However, once their $25 initial offer failed to generate any interest, they raised the bounty and began marketing the program, which they hope will reduce the number of beavers and the damage they cause.

“It’s still kind of in the infant stages,” Horry County Councilman Danny Hardee said of the bounty program. “I still talk to a lot of people that hadn’t heard about it. [They say] ‘You mean we can go shoot beavers and get paid for it?’ Hopefully it’ll pick up some speed and help alleviate some of our beaver problems.”

Under the new guidelines, county officials are asking hunters to freeze the severed front paws of a beaver in a plastic bag and bring them to the county’s public works complex at 4401 Privetts Road between the hours of 8 a.m. and noon on Fridays. Those are the only days the bounties are accepted.

To date, no one has tried to claim any money through the program.

“The County will only accept the front paws of the beaver for collection purposes,” the beaver bounty program on the county’s website states. “The paws shall be frozen and kept in a zip lock plastic bag. A Beaver Bounty Receipt and Application form shall be completed by the citizen applying for the bounty. This application must be filled out in its entirety and signed by the landowner where the beaver was collected. It must be verified that the beaver was collected within Horry County.”

Along with these requirements, the county requires that participants have a valid state hunting or trapper license and fill out a W9 and a payment form to be compensated. The county will mail the payment.

Wildlife experts have doubted the county’s program would be successful. Hunting beavers is hard. The nocturnal animals live in inhospitable swampy conditions and are difficult to see, let alone shoot.

“If you happen to see one, man, it’s by chance,” Allen said. “Because they are very shy. They are very, very, very elusive, I guess like Bigfoot. The signs are there and you know they’re there, but you don’t ever see one.”

Allen suspects that any people who participate in the county’s program will be trapping beavers. He would like to see state wildlife officials teach a beaver trapping class here.

That's a possibility, said Jay Butfiloski, a wildlife biologist who has worked for the state Department of Natural Resources (DNR) for more than two decades. He is a furbearer biologist who has developed landowner guides for controlling beavers.

There is a catch, though. Some folks have to be interested enough to take a class.

"I’m surprised that the folks that are already doing some beaver work aren’t turning stuff in for the bounty," Butfiloski said in an email. "I suspect they must not know about it as it would be easy to 'double dip' by getting paid to remove beaver then turning in the feet for bounty money. That being said, beaver trapping can be hard work, especially in real swampy areas. Doubly so in warmer months when the alligators and cottonmouths are out."