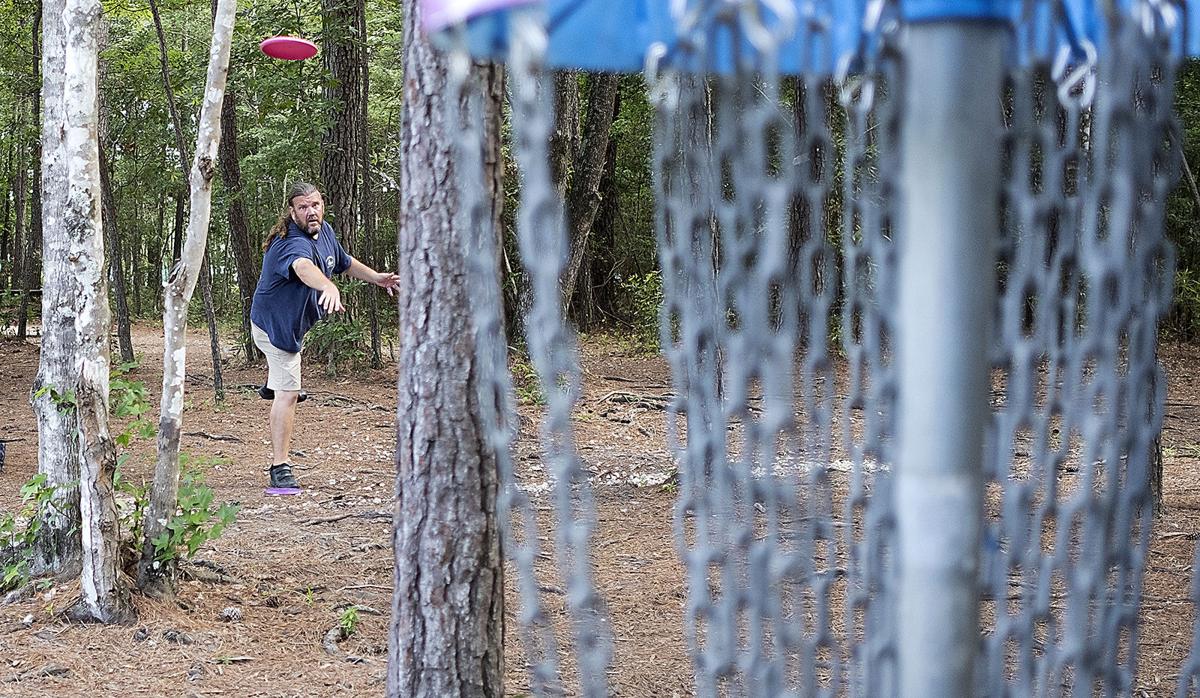 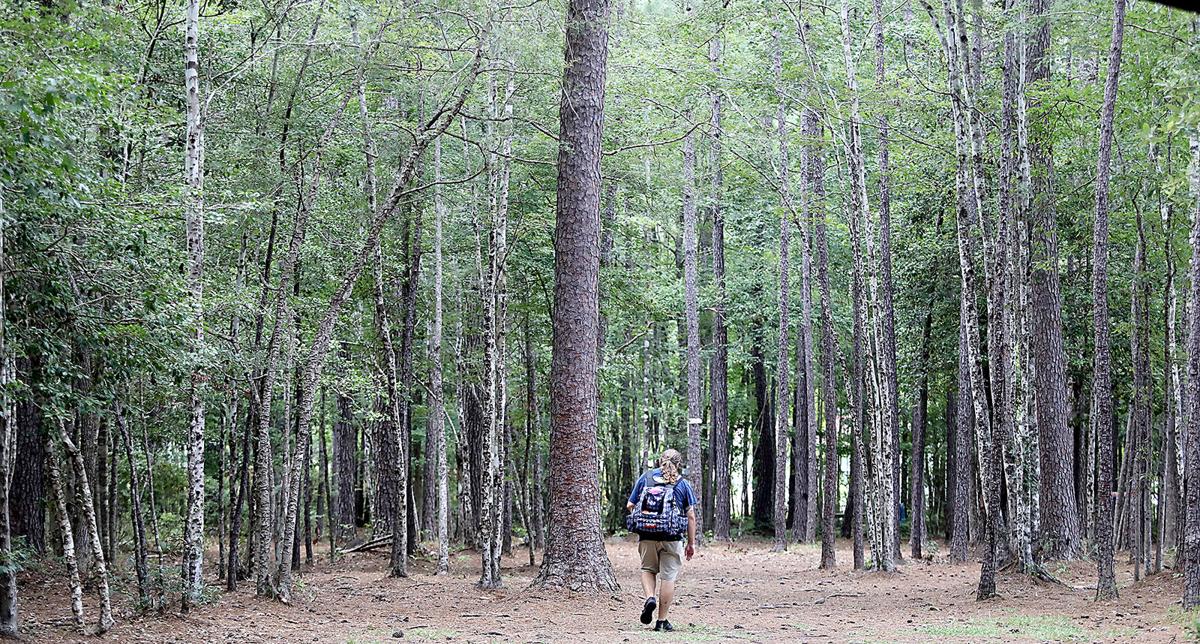 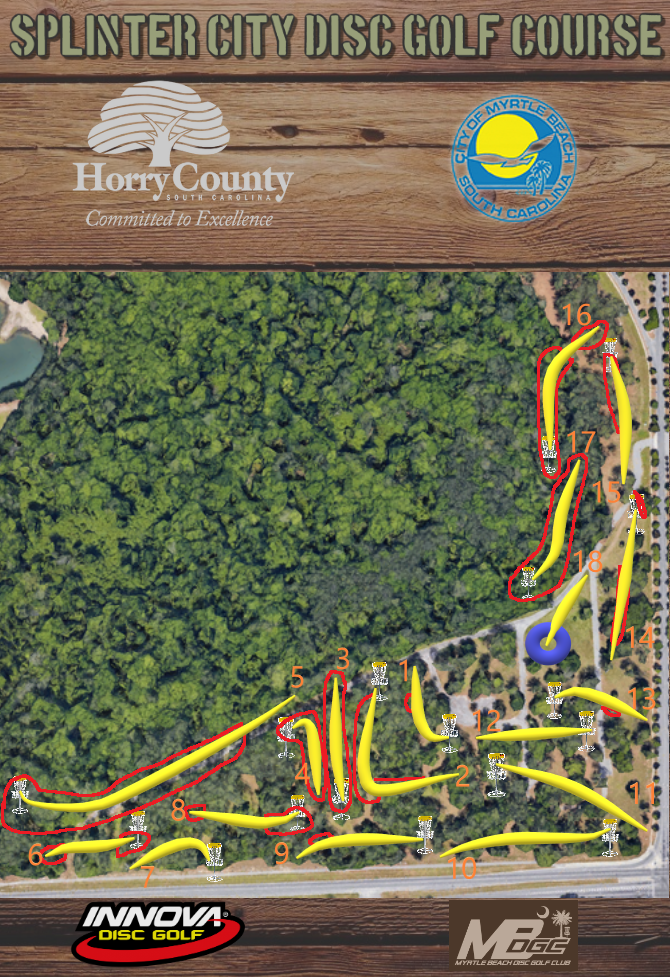 This is the new layout for the Splinter City Disc Golf Course near The Market Common.

The disc golf course at the Socastee Recreation Park is free to the public and operated by Horry County. Photo by Janet Morgan/janet.morgan@myhorrynews.com 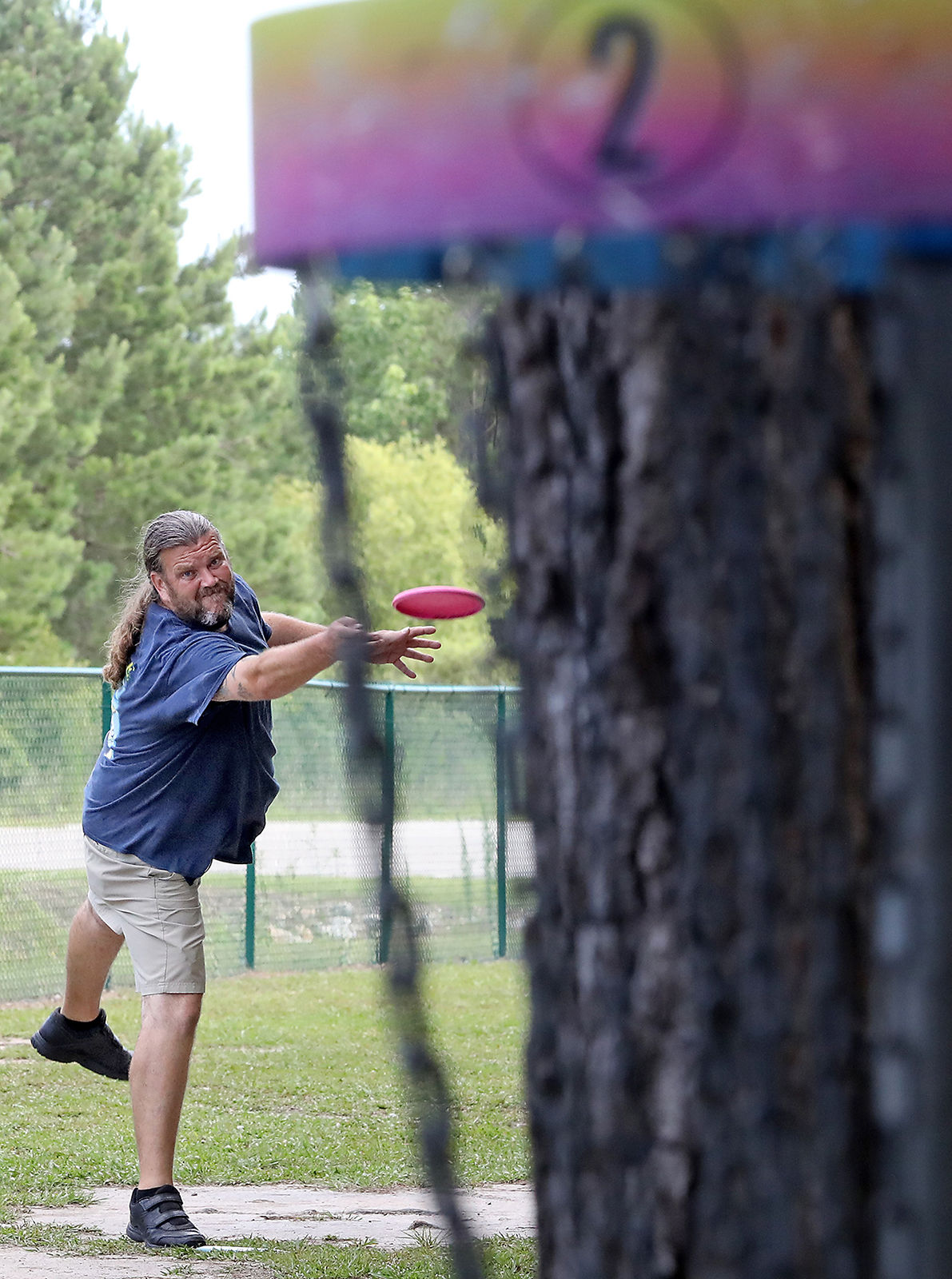 The disc golf course at the Socastee Recreation Park is free to the public and operated by Horry County. Photo by Janet Morgan/janet.morgan@myhorrynews.com 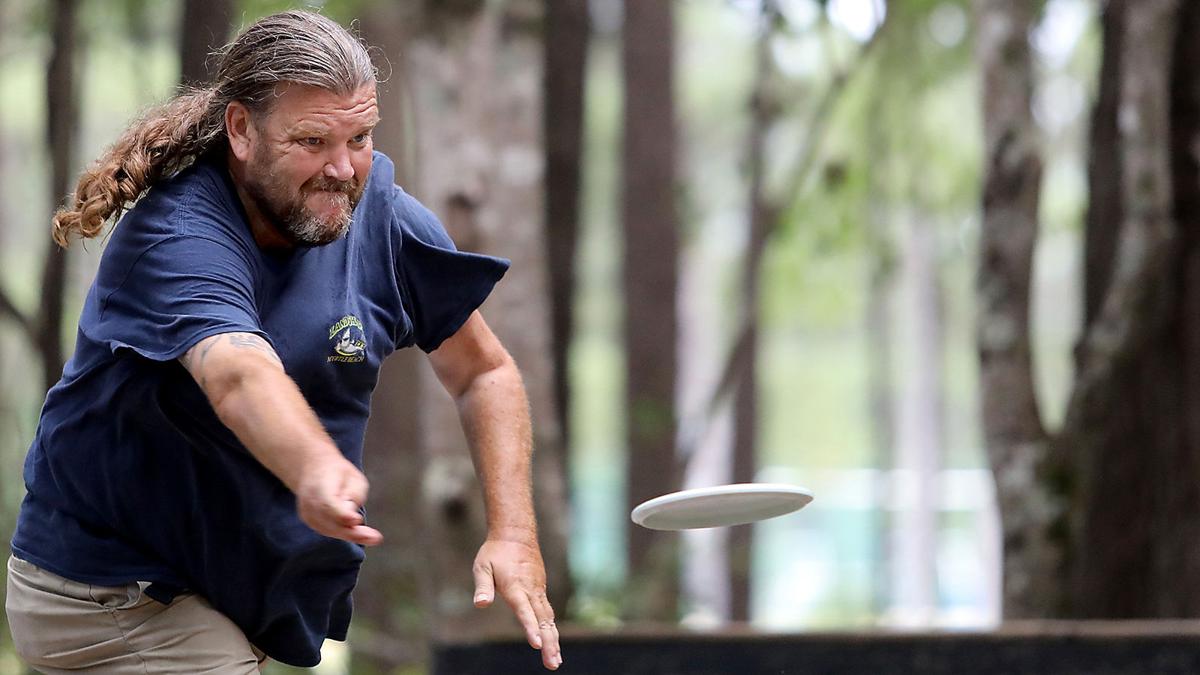 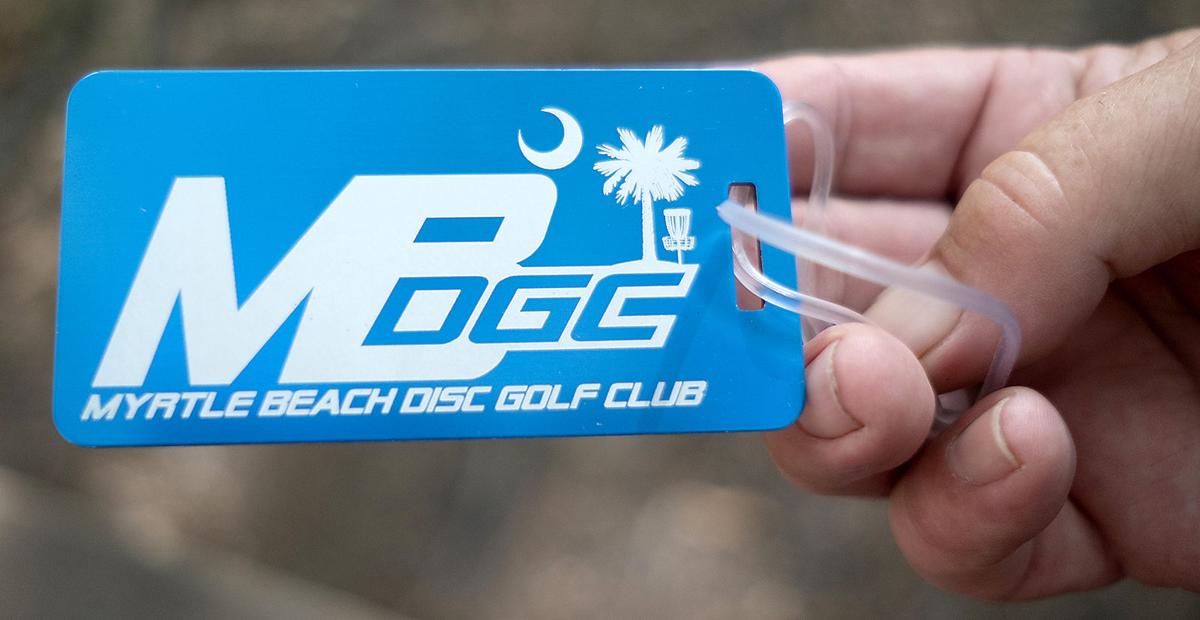 Sean Hodge turned to disc golf as a backup workout.

When his gym closed because of COVID-19, the 45-year-old bartender needed a way to burn calories and lower his blood pressure. A few friends played the 18-hole course at the Socastee Recreation Park, so he figured he’d check it out. By June, he’d lost nearly 60 pounds, found a new hobby and discovered a community that embraced him.

“I gained a bunch of friends out of this,” he said. “Friends I didn’t have otherwise, man. … It’s becoming more popular and more popular. I’m starting to see a lot of people talk more and more about it.”

Disc golf is appropriately named. It’s a sport that involves throwing a disc into a basket, and the player who can do that in the fewest throws (just like golf strokes) wins. Locally, the sport’s popularity has been fueled by an active nonprofit club and the willingness of local officials to invest in more disc golf facilities. This summer, the governments of Myrtle Beach and Horry County agreed to build a new 18-hole tournament course near The Market Common. The county has already begun clearing space for the Splinter City Disc Golf Course and its design is complete. City officials also have plans to construct an additional 9-hole course in the area for beginners.

“It’s pretty cool how much [disc golf] has blossomed in Myrtle Beach over the last few years since the club got rolling,” said Chad Sullivan, president of the Myrtle Beach Disc Golf Club. “It’s pretty awesome.”

A former golf pro who grew up playing ultimate Frisbee, Sullivan started visiting the disc golf course at Socastee in 2016.

The Socastee course was built in 2012. Initially, it consisted of a few baskets and trees. A dozen or so regulars went there, but gradually more diehard disc golfers moved to the area. Par 4 and Par 5 holes were added and Socastee soon became a popular tournament site.

In some ways, the development of Socastee’s course led to the disc golf club forming in 2018.

The club has grown from about 60 paying members to more than 125.

Along with maintaining Socastee’s 18 holes, the club set out to establish another disc golf course on the Grand Strand.

“Being disc golfers in Myrtle Beach, the next 18-hole disc golf property was an hour and a half in any direction, whether that was Wilmington or Charleston or somewhere else,” Sullivan said. “Our goal from the beginning has been to establish another 18-hole property in Myrtle Beach. And it’s been a grind, man. I’ve put some serious time into getting it all together. We ended up being able to kind of grow the sport in the area enough to get people’s attention.”

“Disc golf is something I’ve wanted to have for the city for several years,” said Dustin Jordan, Myrtle Beach's director of parks, recreation and sports tourism.

The problem for the city was that there wasn’t enough available land for a course.

The reason Splinter City worked out is because the county owned 25 acres at the intersection of Farrow Parkway and South Kings Highway. The land used to be part of the Myrtle Beach Air Force Base and both the county and the city saw the site as a way to support the growing interest in disc golf.

“That’s something I wanted to do anyway,” Jordan said. “That was great for me.”

The course, which is expected to open in the coming months, gets its name from an old camp site on the property. It will have 36 tee boxes and 18 baskets. Jordan sees it as a compliment to the Socastee course.

“The usage there is very high,” he said. “Statewide and nationally, disc golf is a growing sport.”

“The idea would be putting something a little shorter and not quite as challenging as Splinter City,” Jordan said.

Sullivan agreed there’s a need for that type of course.

“We want to find a stepping stone-type facility for people to kind of be brought into the game a little bit more softly than [with] all the trees that we have in Socastee,” he said. “They move, I swear.”

On a humid Tuesday afternoon, Sean Hodge hauled his bag of multi-colored discs through a maze of Socastee pines.

“It would be nice to see some more courses,” the North Myrtle Beach resident said. “There’s some times out here on Saturday mornings or Sunday mornings, it gets kind of crowded.”

Since he started playing, Hodge has introduced a few of his buddies to the game.

Although disc golf initially was a way to sweat through a few miles each day, he quickly discovered he liked the camaraderie of the players. At Socastee, disc golfers come from various backgrounds. Doctors and lawyers compete with carpenters and landscapers.

“It’s a pretty open community,” Hodge said. “Everybody’s super, super positive. I played a lot of real golf before I discovered this. But the real golf community can be pretty pretentious at times. This is a little more earthy.”

In playing disc golf, you need to be comfortable while playing. Here are the disc golf shoes that will help you with your disc golf experience.