A proposed change to the way Horry County Council members are elected could lead to a court challenge and appears to have no legal authority supporting it, according to an opinion issued by the state Attorney General’s Office.

Horry County Councilman Harold Worley sought guidance from the office of the state’s top prosecutor because Worley wants the county to hold a referendum asking voters about changing the method of electing council members. Currently the council consists of 12 seats: 11 members elected by voters in specific districts and a council chairman who is elected countywide. Worley has proposed keeping the districts but requiring that their representatives be elected at-large, meaning all the county’s voters would decide who holds each seat.

Worley asked state Rep. William Bailey, R-Little River, to send the AG’s office a letter outlining his proposal. In his letter, Bailey noted that some of his constituents want to develop a petition for a countywide referendum that would ask this yes-or-no question:

Bailey also inquired about the proper method for preparing such a petition, if the document needed to be in a specific form to be valid, where it should be filed and if the proposed question was in the proper form to be included on a ballot.

When asked about the letter, Bailey told myhorrynews.com that he doesn’t have any position on whether the method of election changes; he was simply seeking the AG’s opinion at Worley’s request.

“I sent it up the chain and that’s exactly what I got back,” Bailey said. “I’m assuming that he just wanted to know [that] if he wanted to push it, how could he legally push it.”

In a Sept. 22 response written by Assistant Attorney General Matthew Houck, the AG’s office noted that the question generally met the form requirements in state code. But Houck questioned if there was an error in the drafting because of the way the referendum question was worded.

Horry County officials to begin drawing new council and school board districts. What could change?

The letter also included a footnote. It stated that making every seat on the council subject to an at-large election could lead to a challenge under the federal Voting Rights Act of 1965.

After reviewing the AG’s opinion, Worley said he doesn’t see a reason to abandon his effort.

“They can say what they want to,” he said. “A judge will have to determine that.”

Horry County Councilman Harold Worley said he wants all council members to be elected countywide. He maintains this would make them more accountable to voters outside the communities they call home.

Worley said he asked the AG’s office to weigh in as part of his research on the topic. He said he plans to spend his own money on a petition campaign, and he doesn’t want to fully commit to the project until he’s confident he can succeed.

“I wanted to find out what they knew,” he said. “They have nothing.” 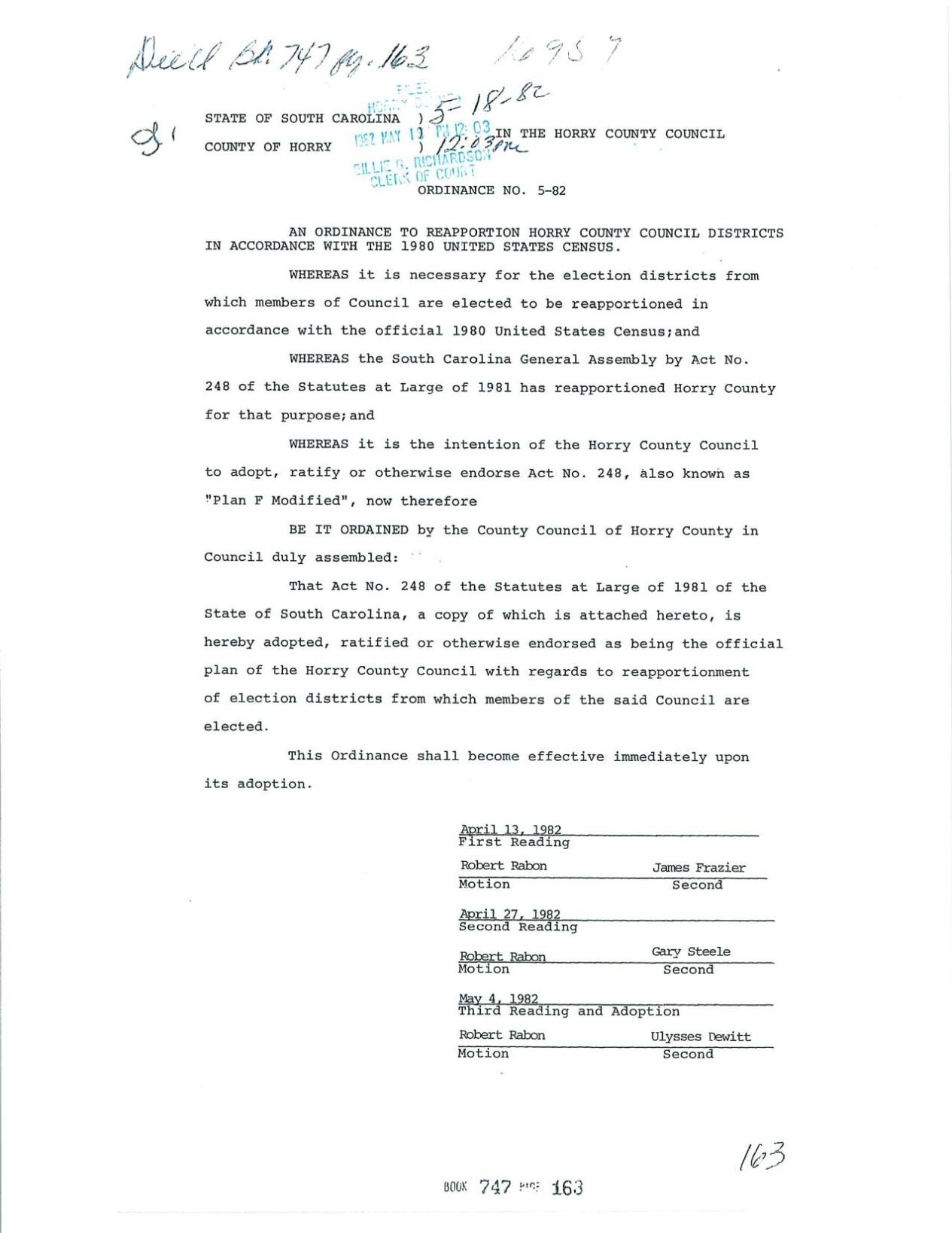 The idea for modifying the election method emerged from Worley’s frustration with his peers on council. After they ignored his pleas to vote against a controversial rezoning in his district, Worley began pushing for a referendum. His argument is that if council members are voting for projects in other council districts, the affected voters should have a say in whether those leaders remain in office.

“It puts the power back in the hands of the voters,” Worley has said.

But the idea has been met with opposition from some council members. They point out that Worley’s plan would put more power in the hands of population centers like Carolina Forest and Myrtle Beach, which would be choosing the representatives for smaller areas such as Bucksport and Galivants Ferry.

“I’m very concerned,” councilman Cam Crawford said. “Utilizing an at-large method could make it more difficult for minority communities to elect their preferred representatives. … It would be difficult for them to elect someone who reflects their values.”

Doris Potter-Hickman, who serves with the Horry County Democratic Party as a state executive committee member, and Orton Bellamy, a Republican Horry County councilman, have joined the county's redistricting committee.

“It would give more influence to money in elections," Crawford said.

Under that system, Crawford envisions council members requiring more publicly funded resources such as a county car or staffers to help them address countywide needs as opposed to focusing on a specific community.

“We have to have a discussion about that,” he said. “How would that work?”

The lack of support for the referendum on council means Worley would not be able to persuade his peers to request that such a vote be held. In Worley's mind, the only option is a petition drive to change the method of election to the type that the AG’s office can find no legal authority to support.

Attorney general’s office spokesman Robert Kittle said in an email that he could not comment on the matter beyond the statements made in the opinion.

“It would be up to a court to declare the proposed method of election is valid or illegal,” Kittle wrote.

But even if Worley is correct and such a change is possible, just getting a referendum question on the ballot would be a major undertaking.

The process would require collecting the signatures of 10% of the county’s registered voters. That's more than 26,000 people. And then there’s the challenge of persuading a majority of the county’s voters to support the change.

Worley has discussed hiring a consultant to run the campaign. But before he forks out additional money for this effort, he said he wants to speak with more attorneys about the likelihood that he could prevail, not just at the ballot box but in a courtroom.

Worley said he isn’t worried about a challenge under the Voting Rights Act, which has been essentially gutted by U.S. Supreme Court decisions in recent years. He does, however, remain concerned about investing so much just to see a judge overturn the result.

“I’m going to be on solid legal ground before I pull the trigger,” he said. “I don’t want to put good money after bad. … I’m going to get my legal work done. … I’ve got plenty of time. I’m not going anywhere.”