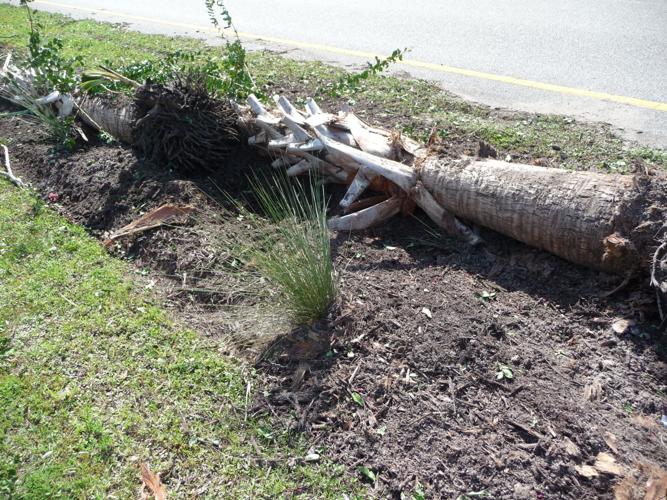 A July 5 wreck damaged thousands of dollars worth of median landscaping that had been planted by Beautify Carolina Forest. 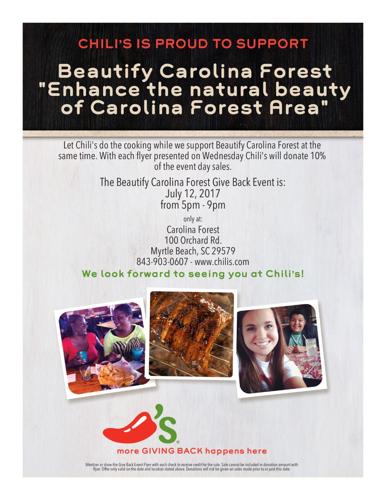 Anyone who presents this flier to Chili's Wednesday night can donate 10 percent of the bill to Beautify Carolina Forest.

A July 5 wreck damaged thousands of dollars worth of median landscaping that had been planted by Beautify Carolina Forest.

Anyone who presents this flier to Chili's Wednesday night can donate 10 percent of the bill to Beautify Carolina Forest.

A group that keeps Carolina Forest’s medians looking green needs a little green from the community.

Beautify Carolina Forest, a nonprofit that hosts litter cleanups and landscapes local medians, is trying to replace some trees and shrubs that were destroyed in a wreck last week. The trees were planted in the median on River Oaks Drive.

Replacing the landscaping, which had been funded in part by a state grant, will cost $3,600, the group’s members said.

The group will hold a fundraiser Wednesday at the Chili's in Carolina Forest from 5-9 p.m. For each customer who brings a flier about the fundraiser, Chili's will donate 10 percent of the individual's bill to the group (a copy of the flier is attached to this story).

Horry County spokeswoman Lisa Bourcier confirmed the plants had been part of work funded by a state grant.

“At this time, there is no determination on how those will be replaced,” she said.

The wreck happened on July 5 and a Beautify Carolina Forest volunteers said a landscaping company removed the palm trees on Friday morning. The company considered replanting them, but it determined there was too much internal damage.

The $3,600 would cover the cost of replacing all the trees and shrubs.

Fay said the county’s claims manager had reached out to the insurance company of the driver whose vehicle did the damage.

“We weren't sure how to proceed as the land is owned by the county,” she said. “We planted it, so we are working through them.”

Fay said the group is waiting to hear if the company will pay for the damage.

The project had been a key success for the small group, which planted 12 palm trees and 80 ornamental grasses in the median in March, said Richard Skrip, who founded Beautify Carolina Forest.

The project cost $5,500 and $2,500 of that came from a Palmetto Pride grant. Another $1,500 came from the recreation accounts of Horry County Council members.

The crape myrtles were paid for with a 2014 Palmetto Pride grant.

Even if the driver’s insurance pays for the plants, volunteers said the group needs donations to support its efforts.

There are several ways to support the group.

Anyone with a Kroger card can go to krogercommunityrewards.com, register the card and enter the NPO #53213. The nonprofit will receive a percentage of the customer's purchase as a donation.

Amazon shoppers can go to amazon.com/smile and select Beautify Carolina Forest as an organization to support and the group will get a percentage of those purchases.

Contributions can also be made via the nonprofit’s web site, beautifycarolinaforest.org, its Facebook page or by mailing a check to Beautify Carolina Forest, PO Box 50411, Myrtle Beach, SC 29579.