North Myrtle Beach City Council knew about the limitations of targeting certain types of protected speech before it passed an ordinance to regulate vulgarity and profanity, records show. First Amendment experts and the American Civil Liberties Union have decried the new law as unconstitutional.

On June 22, a visitor emailed city council to express disdain for the music coming from the Sky Bar on Main Street.

“I must say I was quite shocked when I took my family to Main St at 10:00pm to purchase ice cream,” Darryl King wrote. “As we sat at the tables on the city street I was appalled at the music that was being broadcast from a local bar. ‘The Sky Bar’ on Main St was blasting music that every other word was profanity.”

King’s email complained of three children with him, ages 5 to 10 years-old, being “forced to listen to this garbage” while the bar played “a song that every other word was either M-F or G-D.”

The night following King's email to council, during the early morning hours of June 23, police officers visited the Sky Bar for a noise complaint, but the the bar turned down the volume and “the music was kept at a reasonable level until the bar closed,” according to an incident report.

In a response to King and city council the next day, city manager Mike Mahaney said there was little the city could do “because of constitutional issues regarding freedom of speech and expression.”

Mahaney noted in his June 23 email that in the six weeks prior, dispatch records showed no calls for a violation of the noise ordinance at Sky Bar.

Mahaney told King and council in his email that “Because of the constitutional issues involved the City cannot issue a citation because someone is offended by the lyrics.”

Public records show the complaints kept coming from people upset about language they could hear from the Sky Bar, including a man from Stanley, North Carolina, who wrote to Mayor Marilyn Hatley about "the 'N' word, 'F' and 'wet ass 'p' word..."

"Is there no ordinance for this type of offense and filthy language to be blasted to be heard for two blocks away?" Derek Summey wrote. "I would hope this is not something you and the city of north Myrtle beach would allow."

In July, city council met in executive session to discuss how it could address the vulgarity coming from the Sky Bar. Both vulgarity and profanity are protected categories of speech under the First Amendment, and the strict definition of obscenity precludes music from meeting the criteria.

To be obscene, the Supreme Court has ruled that even sexually explicit speech that appeals to a prurient interest must also lack redeeming artistic, literary, political or scientific value. Music inherently has artistic value, and sometimes political value. Even rap group 2 Live Crew’s “As Nasty as They Wanna Be” was found not to be legally obscene in 1992 despite the sexually-explicit lyrics that are pervasive throughout the entire album.

In response to more complaints about the language contained in music broadcast from The Sky Bar, city attorney Chris Noury wrote back to Summey that “City Council is very aware of the ‘music’ and the sexually explicit and profane lyrics that can be heard by the general public who visit our Main Street area. Council recently met in executive session this past Monday (7/19) to discuss First Amendment issues related to this matter. Staff will meet with Council in the near future to further discuss how the City may possibly manage this issue potentially through a future ordinance.”

City spokesman Pat Dowling said in an email that “The City’s position evolved over time,” adding, “The matter does involve constitutional aspects but they do not necessarily block the path to regulating sound to reflect community standards.”

First Amendment expert Ken Paulson told MyHorryNews in an interview that if the city wanted to clamp down on vulgar language, it would merely have to pass an ordinance that holds all amplified speech to the same standards.

On Oct. 4, the city passed an ordinance holding music with profane, vulgar or obscene language to a much lower decibel threshold than other types of music that don’t contain such langue, if the music can be heard in a public space like the sidewalk or street.

The new law makes it illegal for anyone to use sound equipment to broadcast sustained or repetitive noise into the public that rises above 80 decibels when measured from the property line between 7:01 a.m. and 10:59 p.m. From 11 p.m. to 7 a.m. the limit drops to 60 decibels. Those restrictions apply to all music being broadcast using sound equipment.

Sixty decibels is as loud as a conversation in a restaurant and 80 decibels is equivalent to a garbage disposal or a freight train at 15 meters, according to a Purdue University spreadsheet.

But the city uses a different and more restrictive decibel threshold for music the city deems vulgar, profane or obscene. In those cases, the city has all but banned the targeted language before 11 p.m. and severely restricted it after 11 p.m.

On Thursday, the ACLU of South Carolina sent Hatley a letter asking the city to reject its new law and raising some constitutional problems with the city’s ordinance.

“Content-based laws like the Ordinance at issue here ‘are presumptively unconstitutional and may be justified only if the government proves that they are narrowly tailored to serve compelling state interests,’” wrote Allen Chaney, the ALCU's director of legal advocacy. “The NMB Ordinance immediately fails this test because the City does not have a ‘compelling interest’ in enforcing prudish sensibilities or in maintaining its reputation as a ‘family beach.’”

Chaney noted that the city’s ordinance “has illegally criminalized vast categories of protected speech. The Ordinance defines ‘profane,’ for example, as ‘to treat with irreverence or contempt, crude, filthy, dirty, smutty, or indecent.’ To start, these words are vague and subjective, fail to provide notice of what speech is illegal, and thereby create a serious threat of discriminatory enforcement.”

The city has not provided a list of words or lyrics that would meet the city’s definitions. If a person is found guilty of amplifying their constitutionally-protected speech with the profanity or vulgarity up to the same decibel limits the city sets for non-vulgar and non-profane speech, that person’s speech could land them in jail for up to 30 days or earn them a fine of up to $500, or some combination of the two.

“Beyond North Myrtle Beach’s interest in honoring its citizens’ constitutional rights, passing an unconstitutional ordinance is also ill-advised because it exposes the City to the imminent threat of litigation,” Chaney wrote. A lawsuit challenging the new law “would be costly to North Myrtle Beach, even in the absence of damages.”

Asked about the ACLU’s letter, Dowling wrote in an email that “Everyone is entitled to their own opinion.

“The City is not prohibiting public speech of any kind,” Dowling added. “Anyone who wants to enter a place where such music is broadcast is free to do so. Anyone who does not want to consent to listen to it does not have to enter a place where the music is broadcast and does not have to listen to it from an adjacent or other location. As for how the City would defend its ordinance in court, if challenged, that is not something we will share or debate publicly.” 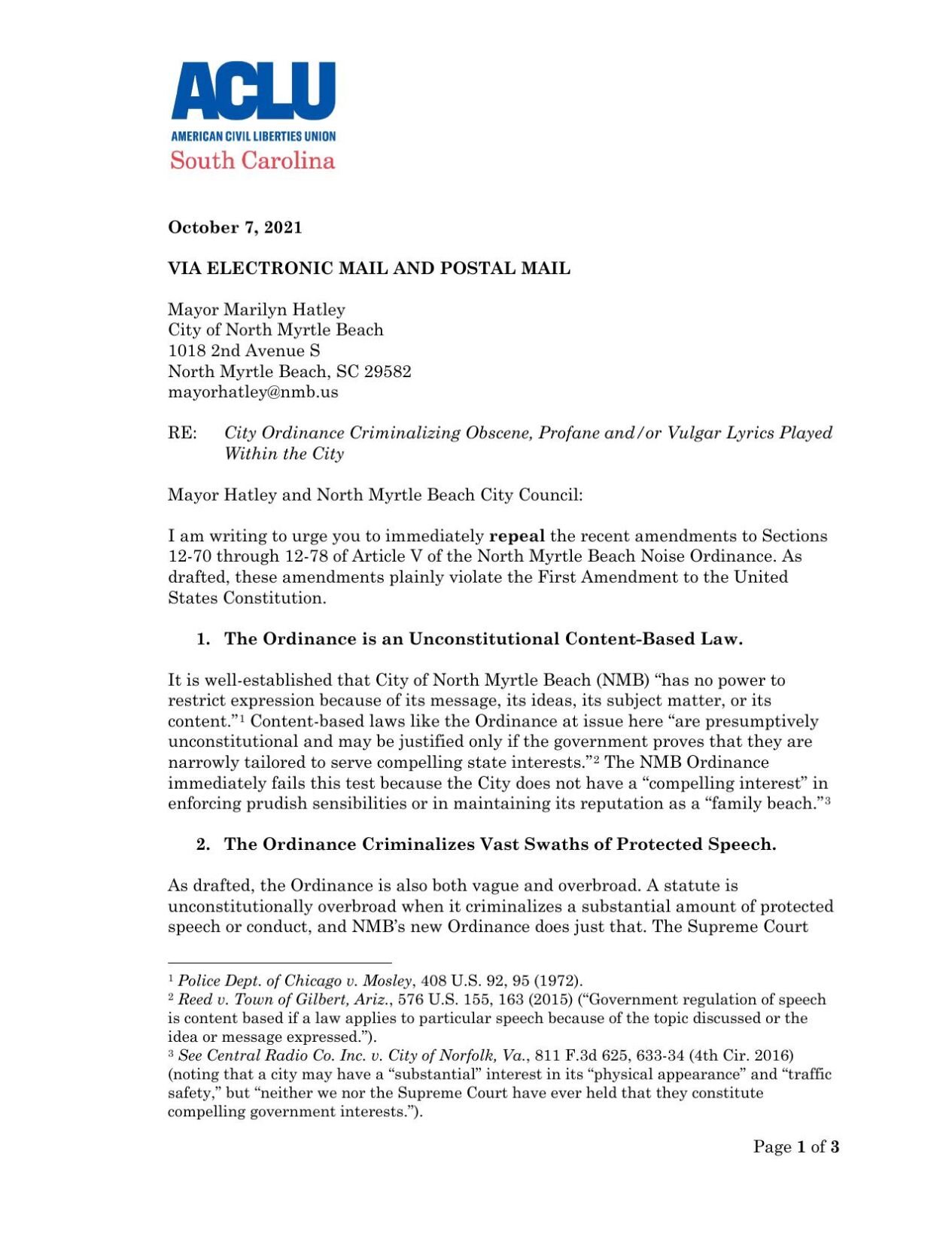