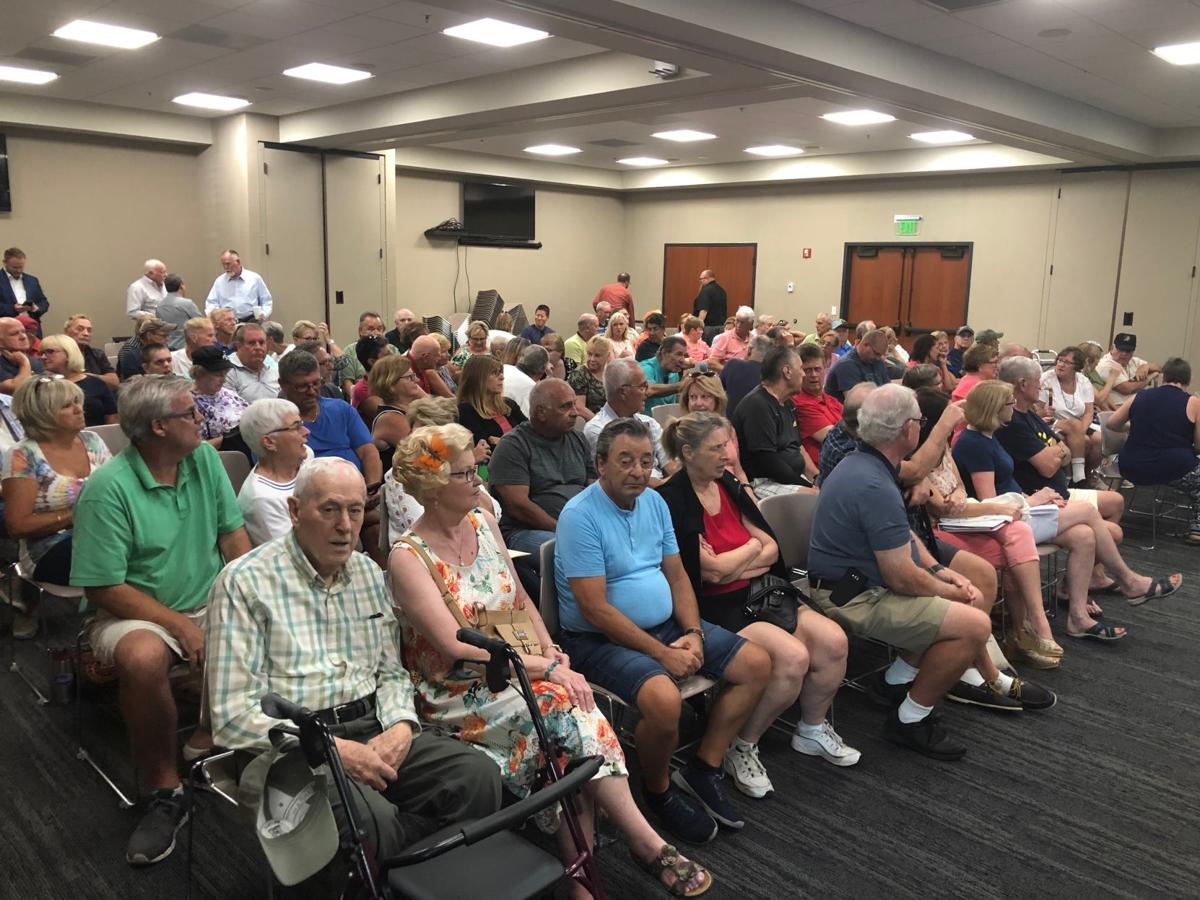 A packed crowd wasn't happy to hear about the possibility of more development in Carolina Forest. Photo by Christian Boschult 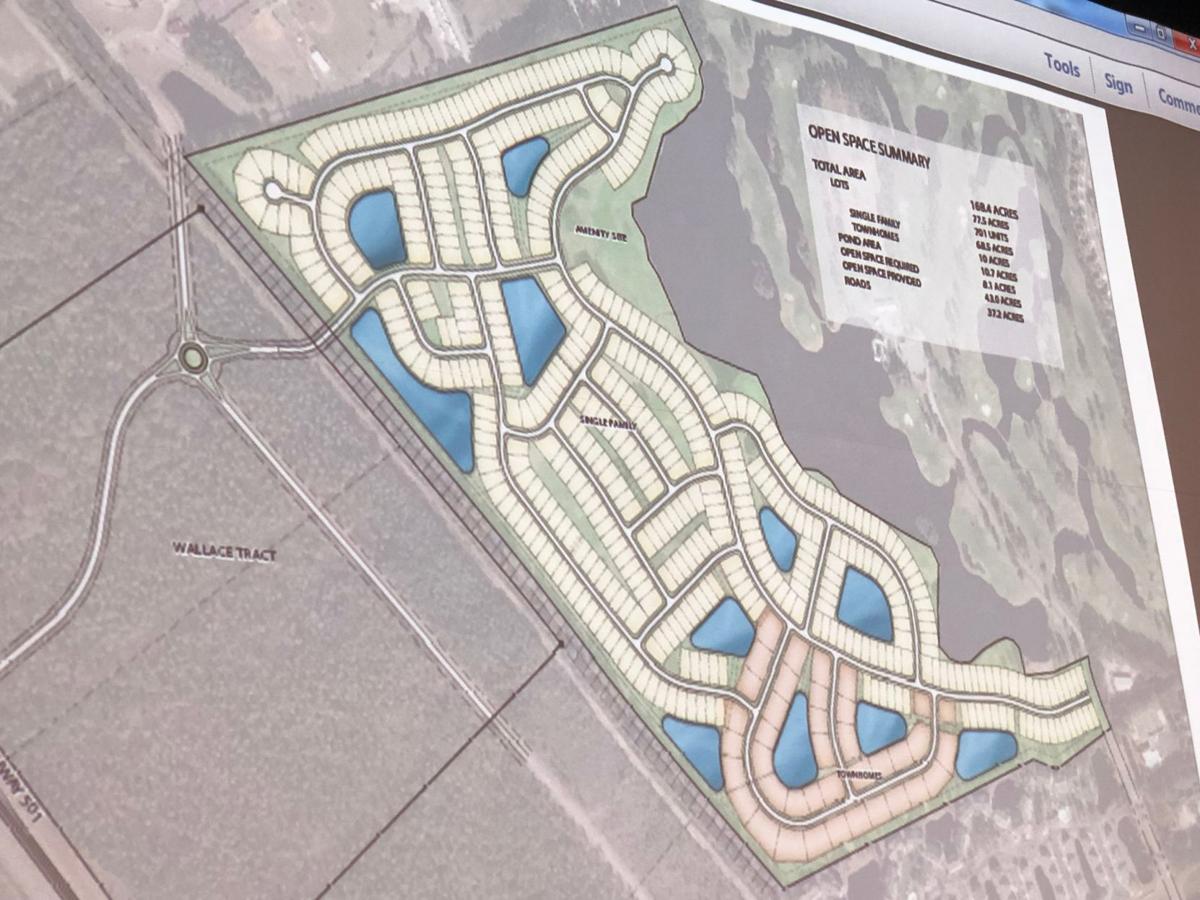 Site plans show the layout of a proposed development on Wizzard golf course in Carolina Forest. Photo by Christian Boschult

Ronnie Parker Jr. stood in front of a tense crowd Wednesday night to give Carolina Forest residents the first look at a potential redevelopment of the Wizard Golf Links.

“My family’s been involved in the Horry County real estate market since 1985,” Parker told the crowd of about 100 packed into an upstairs room in the Horry County Government & Justice Center. “I’ve lived here full-time since 2005 and about 10 years of that time, I lived in Carolina Forest, so I understand some of the issues you guys might be wanting to discuss tonight. We’re excited about this potential project, but…”

The crowd cut him off.

The discussion, originally planned as a private meeting between the developers and Carolina Forest community leaders, became public after the news of the gathering spread through social media. On Wednesday afternoon, some residents became so unhappy that Horry County Planning Director David Schwerd threatened to bring in security to keep everyone in line.

“No one is saying you have to like this, but you have to be respectful,” said Schwerd, who also lives in Carolina Forest. “Don’t yell. Everyone will have an opportunity to speak.”

The meeting was not a legal requirement for the developers, who have not yet submitted a rezoning request for the property.

The developer’s presentation showed a home and townhouse development with 701 single-family units, although a proposal for 750 units was also discussed. The proposed development has two access points in and out.

“[Of the] key elements of our plan, one was to minimize any impact at all to the surrounding area from a traffic standpoint,” said Walter Warren with engineering firm Thomas & Hutton. The crowd laughed at him.

“I understand your concerns,” Warren added.

The plans call for one access from Gateway Drive on the south end of the development and another road that intersects Postal Way in a roundabout and then continues to U.S. 501 on the north end of the project.

The U.S. 501 intersection only exits to the north toward Conway. Residents going north on U.S. 501 could turn right into the intersection also, but no light is planned due to potential traffic problems on the already congested highway.

Warren tried to allay some concerns, telling the room that the development would not be complete until the Carolina Forest Boulevard widening project is finished, and Schwerd said county regulations mandate that the new development will have to reduce peak stormwater runoff by 20 percent compared to the current runoff at the course.

“Traffic generated from this project would not be created until the completion of Carolina Forest Boulevard,” Warren said. “That’s currently around the summer of 2021.”

In addition, the development includes more than 40 acres of open space — five times the required amount — and features a buffer all the way around the border.

But the proposal provided no comfort to neighbors already frustrated with the traffic problems in the area.

“One of the things that has happened since 2007 is this issue has come up over and over again,” said Carolina Forest Civic Association President Carole vanSickler, who lives in the Waterford Plantation development near The Wizard. “I met with Ronnie Parker last year. I told him ‘Hell no.’ I said ‘Walk away. Don’t have all that traffic, don’t have all those homes and don’t you dare come out on Gateway.’ And what are they trying to do? Come out on Gateway.”

VanSickler isn’t the only community leader with concerns. She told the crowd that they would have to keep showing up to planning commission and county council to stop the proposal.

“What color is your T-shirt going to be?” asked county councilman Bill Howard, referencing a tactic used in the past to pack council chambers with people wearing the same-colored clothing. “I work for you, and I’m listening to you.”

Councilman Danny Hardee, who represents the district where the development is proposed, said he wouldn’t vote for the project in its current form.

“It’s either going to be a golf course or a project, and the people don’t want the project,” Hardee said. “I represent the people, so I’m going to vote the way the people need me to vote.”

The developers haven’t actually submitted a rezoning request yet, and are open to suggestion.

But vanSickler said even if changes are made, she would still oppose the development.

ARE YOU LOOKING FOR A GREAT IDEA FOR A GIFT??