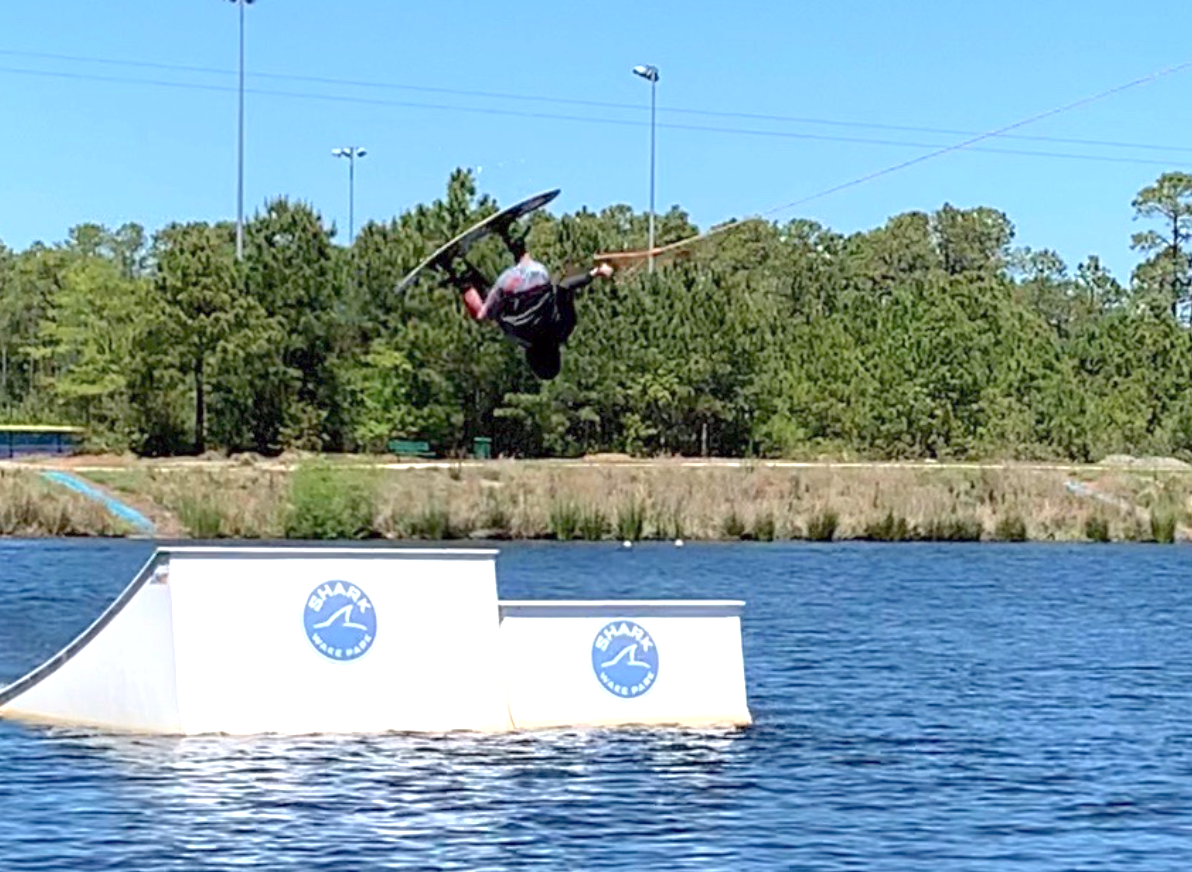 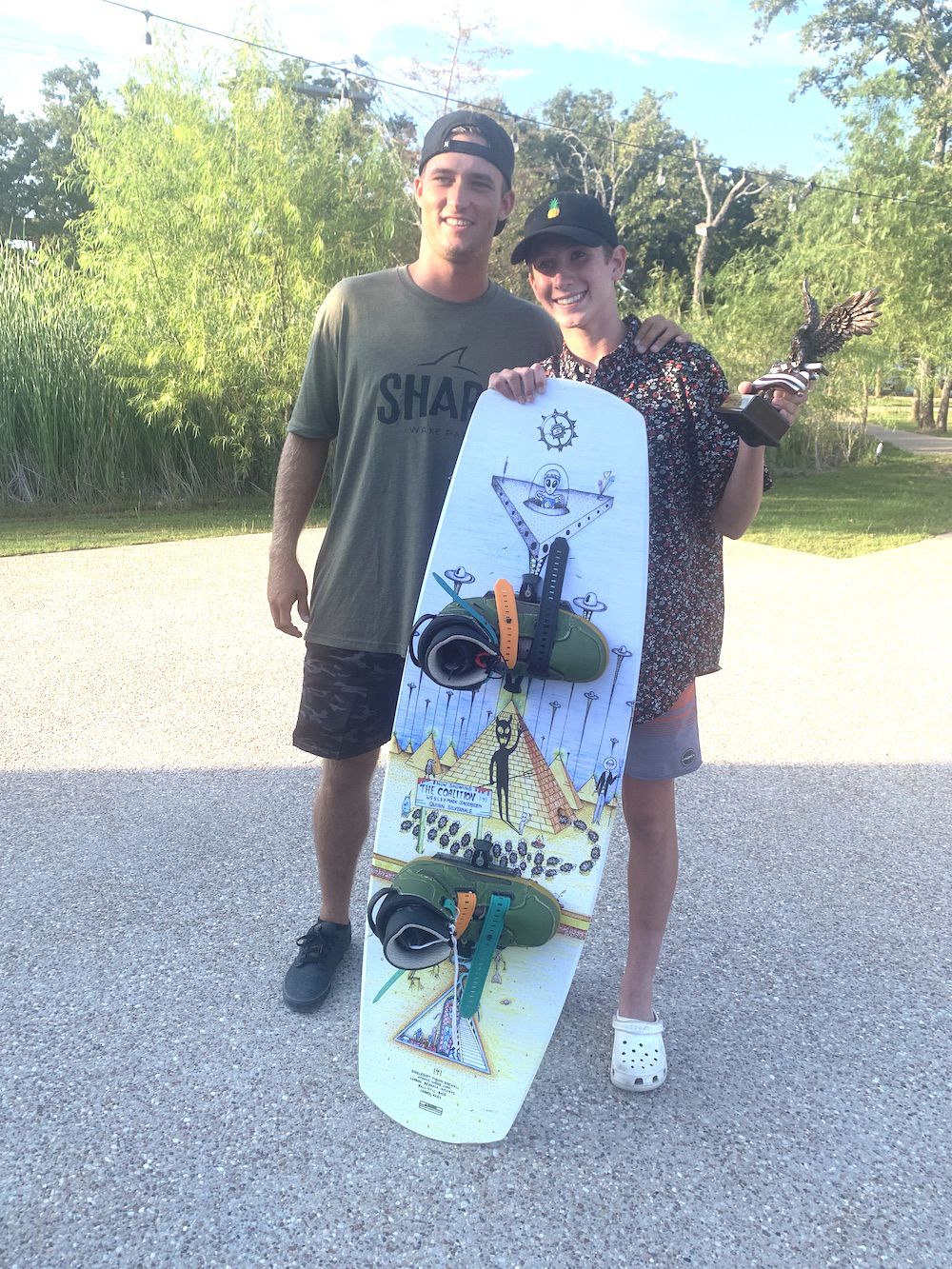 Trey White (left) of Shark Wake Park, and Ethan Bellamy after his third place win at a national wakeboard competition in Texas in August.

Trey White (left) of Shark Wake Park, and Ethan Bellamy after his third place win at a national wakeboard competition in Texas in August.

Trey White said Ethan Bellamy’s wakeboarding injury in 2017 was like none he’d seen before.

“He was just riding around when it happened, his arm went through the handle,” said White, who is the general manager of Shark Wake Park where Bellamy learned to wakeboard. “It was pretty scary.”

He did a summer camp at Shark Wake Park and the rest is history.

“That’s when I fell in love with it,” Ethan said.

On August 2, 2017, he fell while wakeboarding and his arm went through the handle, and the rope caught his arm and pulled him through the water. It severed ligaments, arteries and a nerve in his left arm. After two ambulance rides and a helicopter ride, he was on his slow road to recovery.

Recovery took about four months, and his left wrist is still not back to normal.

Despite his limitations, he still advanced through quarter finals and semi-finals in the Texas competition, and took third place nationally in the finals on August 31. The national championship is the final event of a series of competitions in a “points chase” contest, where competitors must qualify in several points chase contests leading up to the national event.

He wasn’t sure he would wakeboard again at first after his injury.

“When it happened, I didn’t [think I would wakeboard again], but once recovery started, I knew I would be able to do it,” Ethan said.

His father Ty Bellamy said wakeboarding started out as just one of those hobbies he thought Ethan would like to do for a summer, but it has turned out to be so much more.

“When he fell…it was a big indicator to us that he was pretty good at it [because of] the amount of kids that came from the park to see him and send cards and gift baskets. Kids we didn’t really know, these were sixteen to twenty-year-olds coming to check on him,” Bellamy said. “That’s the kind of camaraderie they have out there.”

Bellamy said he and his wife, Harmony, were rooting for him to get out there and try again.

After winter went by and summer came around again, Bellamy took Ethan back to the park.

“Ethan said ‘Dad, I want to take my board just in case,’” Bellamy said. “The first time getting up he fell down, but the second time he stood up and his been going ever since.”

Shark Wake Park is just one of the regional wake parks that hosts the “points chase” contests.

Bellamy said 11 team members came from Shark Wake Park in all ages and categories. Two advanced the first day, and only Ethan advanced the second day.

“We were pleasantly surprised to see him make it to the semi and finals,” Bellamy said. “That in and of itself, for his age and as long as he has been riding. It’s really stiff competition.”

Then they found out Ethan had placed third nationally.

“Jaws dropped … he was jumping up and down,” Bellamy said.

White traveled with Bellamy and his family to the championship in Texas, and said he was so happy to be there to watch the competition.

“It was an incredible comeback,” White said. “It was insane, my heart was about to beat through my chest I was so excited for him.”

Bellamy said he also participated in a contest this past weekend through a local wakeboard club, and got second place in his division. In two weeks, he is participating in a benefit contest called Wake For a Cause, where winnings go to charity.

Ethan said besides school, wakeboarding is his main hobby and he plans to keep doing it as long as he’s having fun, he said.

Last year, the S.C. House of Representatives passed a bill that encourages internet providers like HTC and Spectrum to expand broadband internet service in underserved areas where at least 90 percent of households do not have access at speeds faster than dial-up. The bill calls for the state to subsidize up to $2 million to providers to offer expanded services. Do you think the state needs to help fund expansion of broadband internet? Choices are: