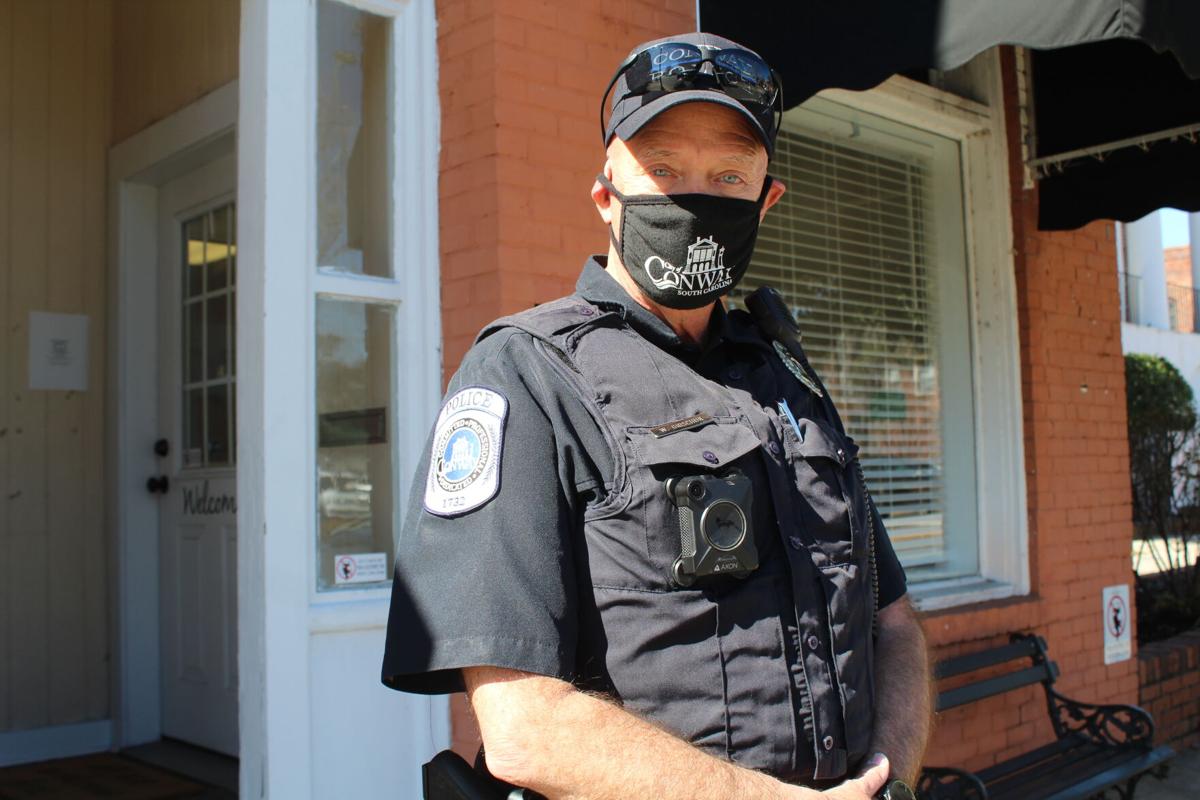 Bill Grischuk stands in front of the Downtown Conway office where police will soon have an office. 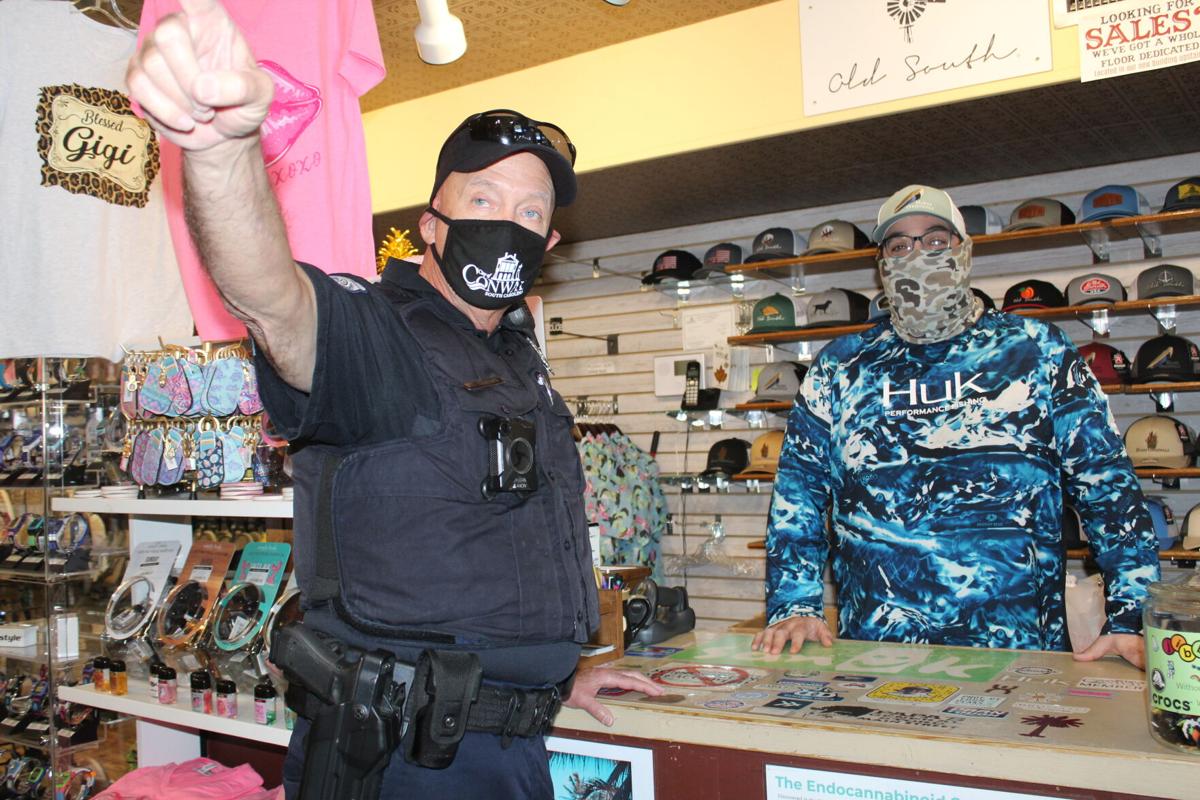 Bill Grischuk stands in front of the Downtown Conway office where police will soon have an office.

As Senior Master Patrol Officer William “Bill” Grischuk walked around Downtown Conway Tuesday morning talking with merchants and having his picture taken, a couple approached him about a vehicle violation they wanted to talk with a judge about.

Grischuk told them they couldn’t plead their case at the Conway City Hall because it was a county violation and he told them where they needed to go.

Making friends is a big part of his job as the downtown officer.

Grischuk has been assigned downtown at least part time for about three years, but that is about to change now that the city has an office for him and the Conway Police Department has eight new officers coming onboard.

The office, located in the building facing Main Street beside city hall, is also allowing some other city departments to spread out.

Conway police will soon settle into the left side of the building, with a few employees from human resources and IT already settled into the rest of the building that also includes a conference room and a small, as yet, unclaimed area.

Grischuk retired from his police position in New Jersey after 27 years when he and his wife decided to move to the Conway area. They had visited the area on vacations and Grischuk, still a golf lover, had enjoyed golf trips here. He is also a motorcycle enthusiast and has owned a motorcycle for 50 years now.

At 67-years-old, he especially likes the lower cost-of-living in this area and has settled in easily with the Conway Police Department.

Conway Police Chief Dale Long said Grischuk “is an extremely personable officer, a great communicator, which you expect from somebody that has the years of experience he does.”

His goal is for Grischuk and, eventually a second officer, to build relationships and be there when Conway’s business folks need him.

Being assigned downtown full time will also allow the officers to get to know business people’s vehicles, and when they walk through alleys and byways, they will begin to understand what’s normal and what’s not, Long said.

He wants to see an officer there always from Monday through Friday, but right now the reality is when patrol shifts are shorthanded an officer must answer those calls.

Grischuk already knows that one of the things merchants want him to tackle is parking violations. Some merchants claim that others park in front of their businesses and many people don’t follow the two-hour parking limit downtown.

“As I walk around downtown I get more people saying hello to me and more people thanking me for my service. It’s really nice,” Grischuk said.

When he sees children in the area, he gives them junior officer stickers hoping to teach them not to be afraid of police, but to know instead that they can go to them when they need help.

He is already working to compile emergency access numbers for the people who work in his territory. He’s found that to be a much bigger job than he expected. Just taking care of the people on Third Avenue was an eye opener to him, not realizing that many of the buildings have people working or living upstairs, but he isn’t discouraged. He plans to list the numbers for everyone in his area.

Grischuk is also known to hop into a golf cart and check out his entire area that runs from the Conway Marina and Riverwalk to S.C. 905 near the Ocean Fish Market and then along Fourth Avenue.

He says the Conway market is much smaller than he’s used to in more metropolitan areas, making the Conway beat more personal and its people more approachable, and he gets to see people he normally might not see.

He’s even finding some businesses he didn’t know existed. He isn’t limiting his logs to retail businesses. He’s including restaurants, attorneys and some members of the Solicitor’s Office.

“Doing the old walking beat downtown just appealed to me. I enjoy it,” he said.

But just walking around these several blocks isn’t all he’s doing.

“I got plenty more to do,” he said, starting to roll off a list.

He takes care of delivering the city’s water department’s bank deposits, taking the bond work from the Conway Municipal Court to the J. Reuben Long Detention Center, serving warrants on inmates, staying in the court when it’s in session and usually transporting inmates to the court and back to the detention center. He takes the police department’s mail for postage, and the trained school resource officer, at times, doubles in that role.

But he says he likes staying busy.

Long says the big advantage of having the downtown office is his officers will be able to download their car and body cameras, write reports, check computer information and allow people to walk in the front door if they just want to speak with an officer.

He also foresees using the space for briefings for downtown events like Riverfest or the recent running events.

The big advantage for the officers is they won’t have to return to the Public Safety Building on Ninth Avenue to complete these tasks.

Also, he said, for the downtown business people the advantage will be having help closer and more responsive.

He also expects them to learn whose cars are whose and where they should be and keep a closer look at activity in the alleys.

More officers on the way

Allowing Grischuk to concentrate on downtown and get help from a second officer are possible because the Conway City Council chose to beef up its police contingent by eight officers this year at annual cost of $296,000.

“We don’t hate police in Conway,” Councilman Shane Hubbard said, adding that he’s for anything that keeps people safe.

“If you ever hear me say defund the police it’s going to be in a way talking negatively about someone that wants to do it,” he said.

“I don’t think Dale’s going to ask for anything he doesn’t need and isn’t for the betterment of Conway. I think that if our police department feels like there’s a need for it, then I’m all for it. They know better than I do. I don’t see all the calls come it,” he said.

Conway Downtown Alive Executive Director Hillary Howard says over the years Grischuk has gained a lot of knowledge about downtown, the buisness owners and any problems they might have. This institutional knowledge will give him a leg up and will benefit all of downtown, she said.

Recently, she said, she’s heard a lot of positive feedback about the “devoted downtown officer” that’s been moving around the downtown area.

She believes potential problems are being handled much more swiftly due to the relationships that have been built.

“I think in general the downtown merchants feel protected,” she said.

John Rogers, deputy city administrator/grants coordinator, says the renovated building means a lot to the city because the city has been low on space downtown. In the past, human resources employees were sharing the city’s finance building, and it was packed, he said.

Before a bathroom, that wasn’t close to meeting city code, was in a closet.

He doesn’t call the building a substation, but says instead it’s a “functional office.”

“…of course, the police officer being a visible presence downtown will make a big difference,” Rogers said.

City workers planned to install the technology needed for the police this week.

The city has eight officers in various stages of training now and should be most of the way through their training by mid-summer, according to the chief.

The department will still have four openings when these eight officers are on the job, but Long hopes by then to assign an officer or two downtown full time.

Long says his department needed the eight new officers to keep up with Conway’s growth.

He says Conway’s growth is somewhat different in that it isn’t an expansion of the city’s borders; it’s the increasing density.

He says particularly in the S.C. 544 area “the density is unbelievable.”