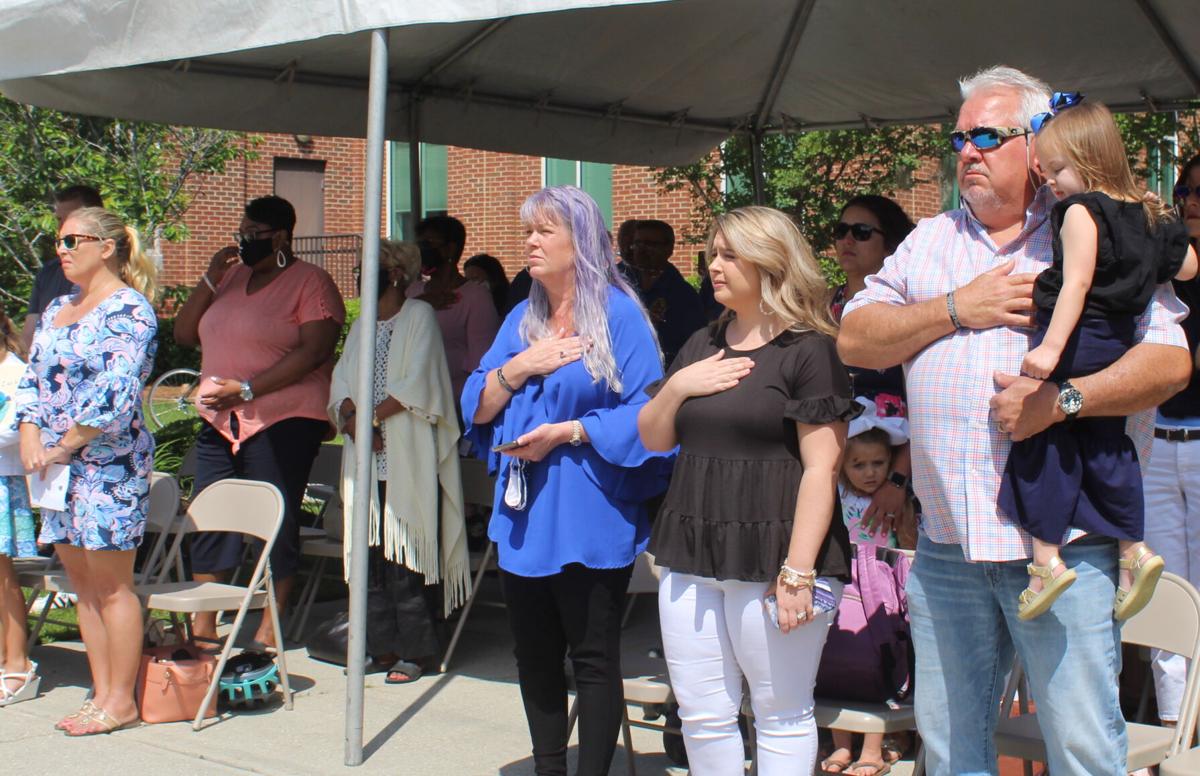 Members of the family of the late Gordon Best stand as the National Anthem is sung. They are Deana Gore, Taylor Best, Gregg Gore and Blakely Best. Sgt. Best died in a car crash Jan. 1 as he rushed to answer a call from Barefoot Resort. He was only 30-years-old. 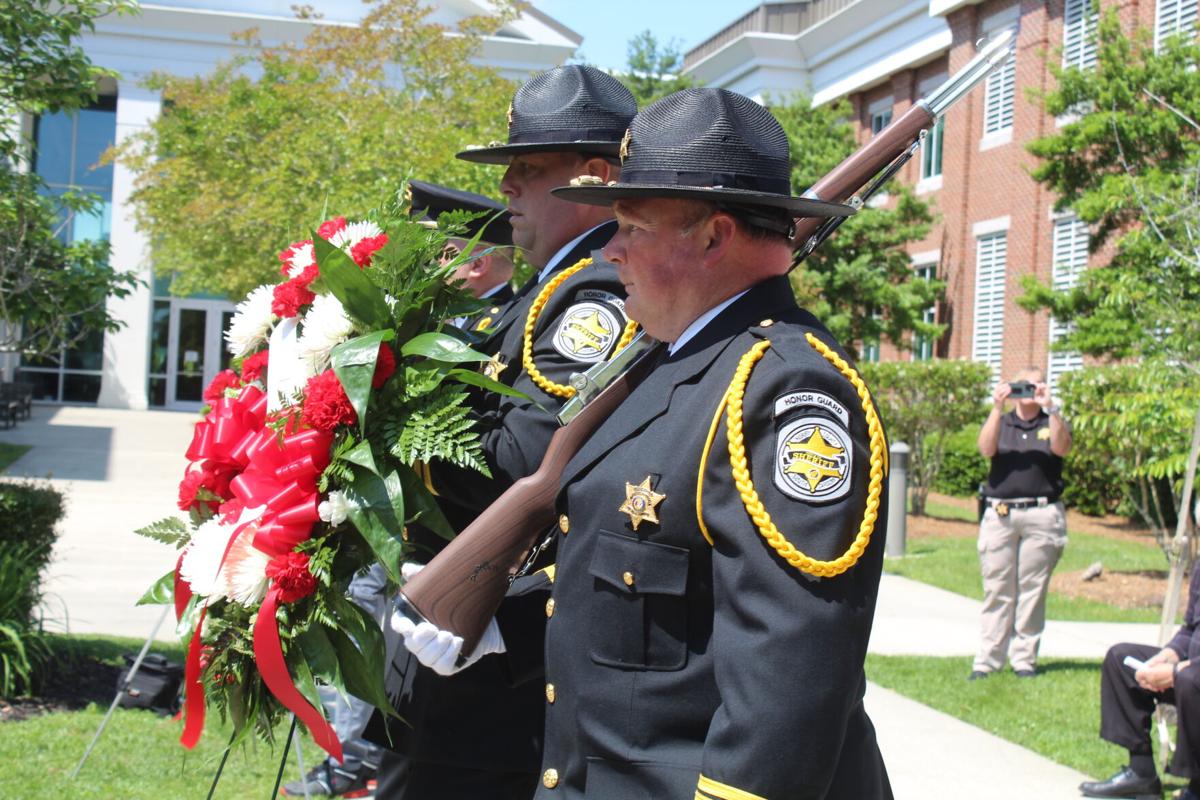 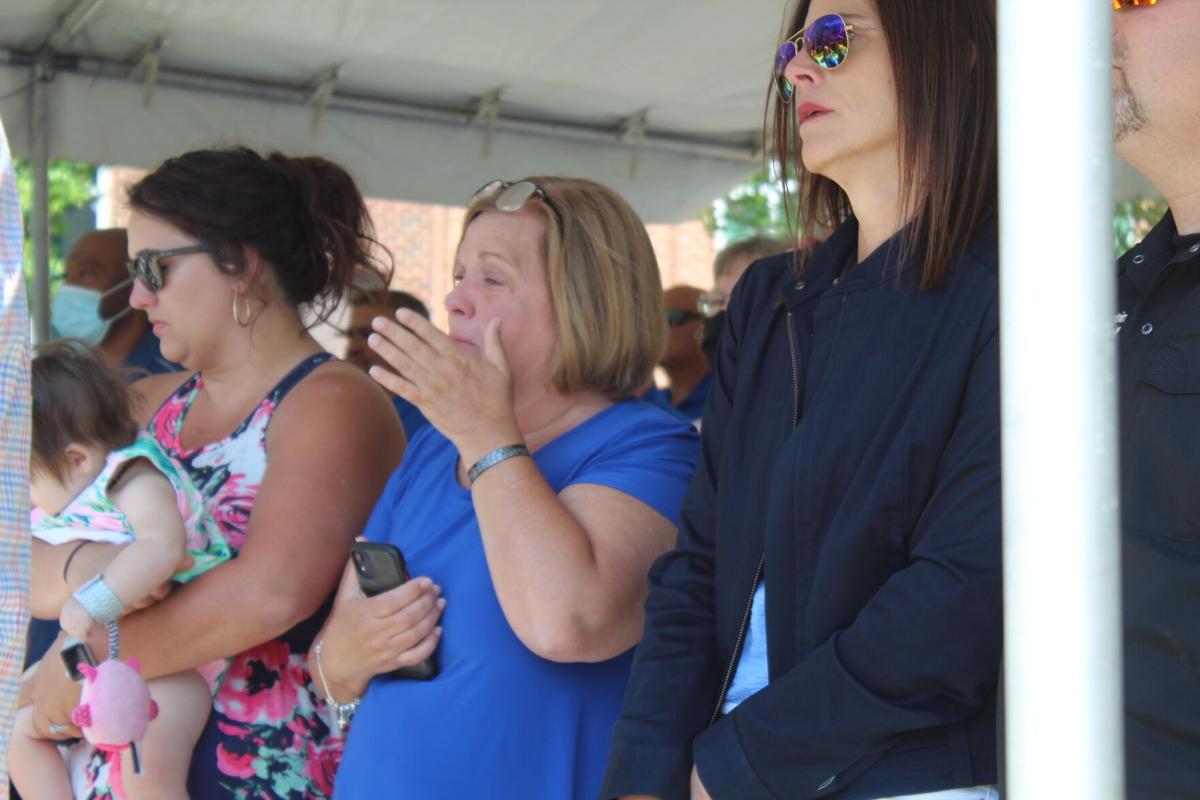 Members of the family of the late Gordon Best stand as the National Anthem is sung. They are Deana Gore, Taylor Best, Gregg Gore and Blakely Best. Sgt. Best died in a car crash Jan. 1 as he rushed to answer a call from Barefoot Resort. He was only 30-years-old.

Gwendolyn Gerald has attended the police memorial at the Horry County Government & Justice Center every year except one for the past 20 years.

She was there again this year remembering her husband that she lovingly referred to as “my gentle giant.”

Her giant, Randy Gene Gerald, was shot to death in 2001 when he stopped to help a woman who was being assaulted by a man.

The lieutenant with the Horry County Sheriff’s Office was 47-years-old when he died.

“This is basically all we get each year is a memorial service,” Mrs. Gerald said. “We live with it everyday. It’s great to know that the county keeps the memory alive.”

At Friday morning’s service, Mrs. Gerald said she sat across from a young widow who burst into tears during the service.

“That was me 20 years ago, so I know I could feel her pain and feel so sorry that she had to be here,” Mrs. Gerald said.

Twenty years later she said it’s still hard facing her husband’s death saying it’s just as fresh today as it was 20 years ago.

“You have your days,” she said. “It’s just our new normal. You learn how to adjust to it. It’s a never-ending story…”

That story is just beginning for the families and friends of the four officers whose names were added to the memorial this year.

Ambrosino died with COVID-19, Best died in a car accident as he rushed to answer a call from Barefoot Resort, Hancher died when he answered a domestic violence call and Gore was hit by a car when he stopped to remove debris from the road to keep others from being injured.

The day included the singing of the National Anthem and God Bless America sung by Shannon Kipe; Amazing Grace played by the Coastal Carolina Shields Pipe and Drums; reading of the names of all 17 Horry County officers who have died on duty since 1891; the placing of a wreath on the police memorial monument at the Horry County Government & Justice Center; comments by Chuck Canterbury, a former Horry County policeman and former national president of the Fraternal Order of Police, his son, K.C. Canterbury, the current president of the FOP, and 15th Circuit Solicitor Jimmy Richardson; and the playing of Taps by the Horry County Sheriff's Office Honor Guard.

The former police officer and FOP president said when he was policing he didn’t think much about what officers subject their families to, but now that he has a son who’s an officer he feels the fear that other family members fear every time a phone rings late at night, or he hears a siren or sees an ambulance.

He asks the crowd of at least 100 people to help his group push Congress to pass legislation making killing a police officer a hate crime.

He pointed out that a record number of officers are leaving law enforcement and he wants to help do something about it.

“We are and will be the loudest voices in these calls for action,” he said.

Richardson said the past year has been hard on everyone.

He, too, is worried about modern day treatment of law enforcement officers and screams about their behavior.

“I need you to know that regardless of the screaming, the vast majority of Americans respect and appreciate what they do,” he said.

Gregg Gore, a member of Gordon Best’s family said, “Gordon was one of the best.”

He said the family has received a lot of support from a lot of people since he was killed and have even been the beneficiaries of a few fundraisers.

Jess Noble, whose father is a retired state policeman and her brother a city policeman, said she was at the memorial to talk about the issue of police suicide. She said far too many police officers at dying at their own hands these days and she wants to bring attention to the problem.

Della Tann Buford and Randy Eugene Gerald of Longs, both cousins of Randy Gerald, said they have also attended all but one memorial in the past 20 years.

Buford called Friday’s memorial “awesome” and said, “I enjoyed it, and I’m so happy that he’s recognized still. He was an awesome guy."

She also described him as quiet, intelligent and fun to be around.

Gerald said Randy Gerald was a beautiful person to be around.

[He was] “well respected and he was loved by everyone.”

Peace officers who have died in Horry County