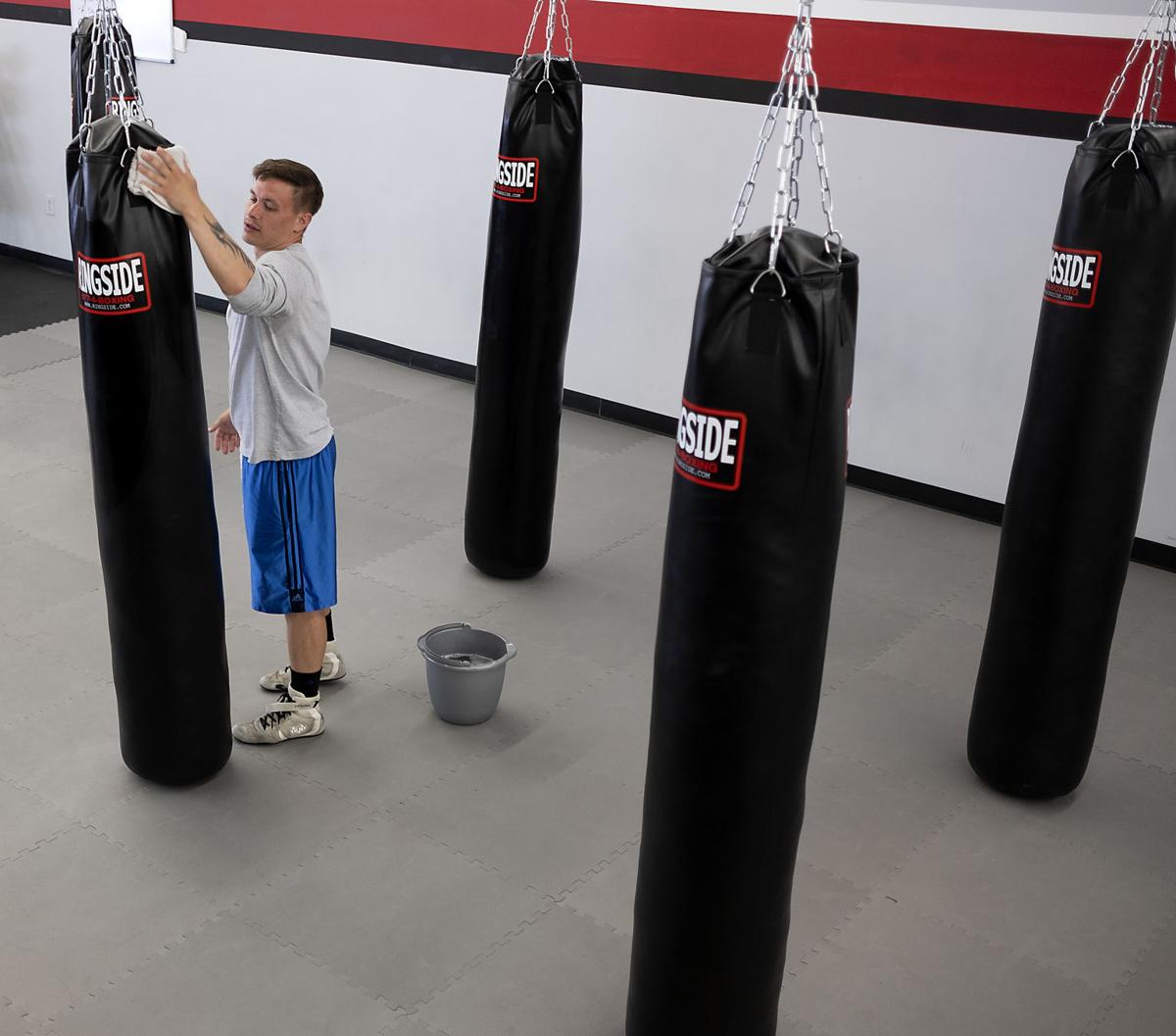 John Romyns cleans the bags at Beast Boxing in Myrtle Beach on Friday in preparation for Monday’s reopening. Photo by Janet Morgan/janet.morgan@myhorrynews.com 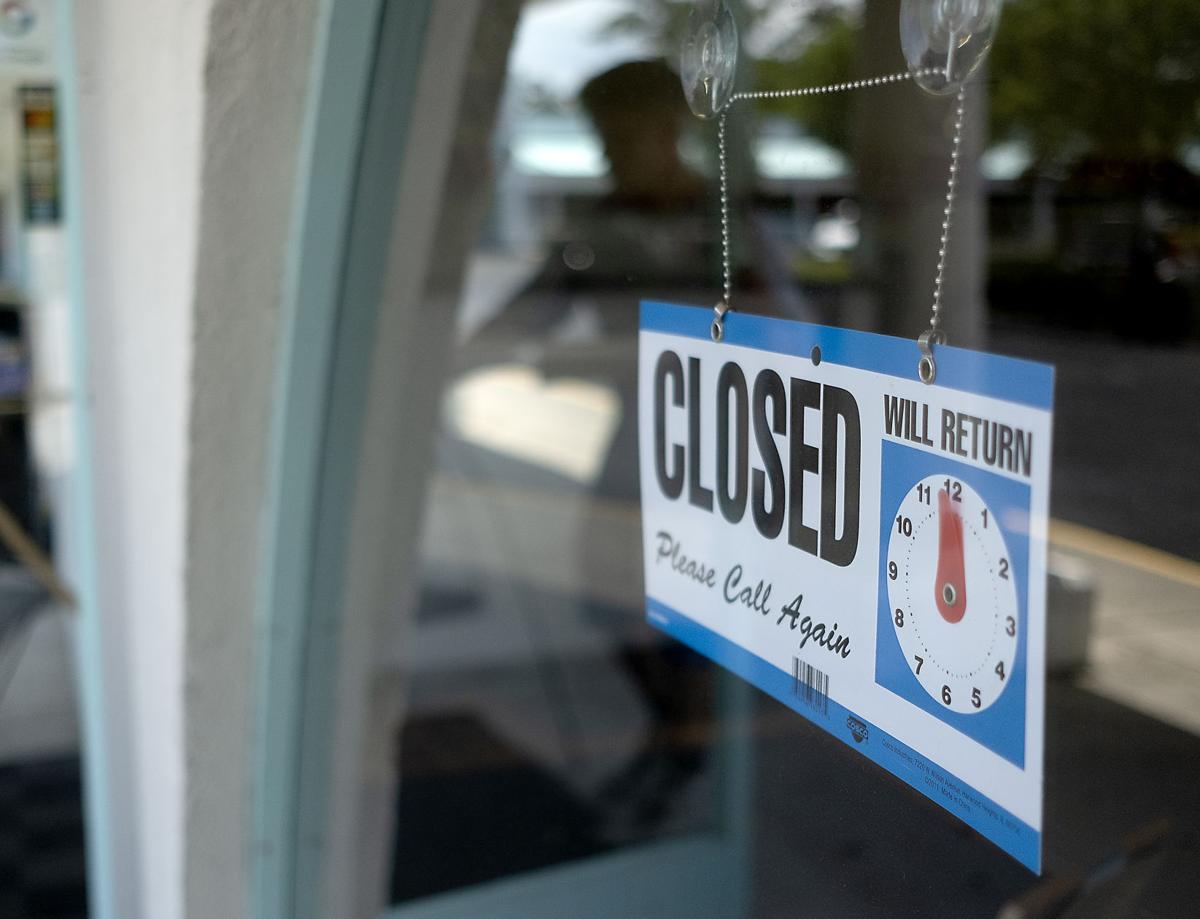 John Romyns cleans up at Beast Boxing in Myrtle Beach on Friday in preparation for Monday’s reopening. Photo by Janet Morgan/janet.morgan@myhorrynews.com 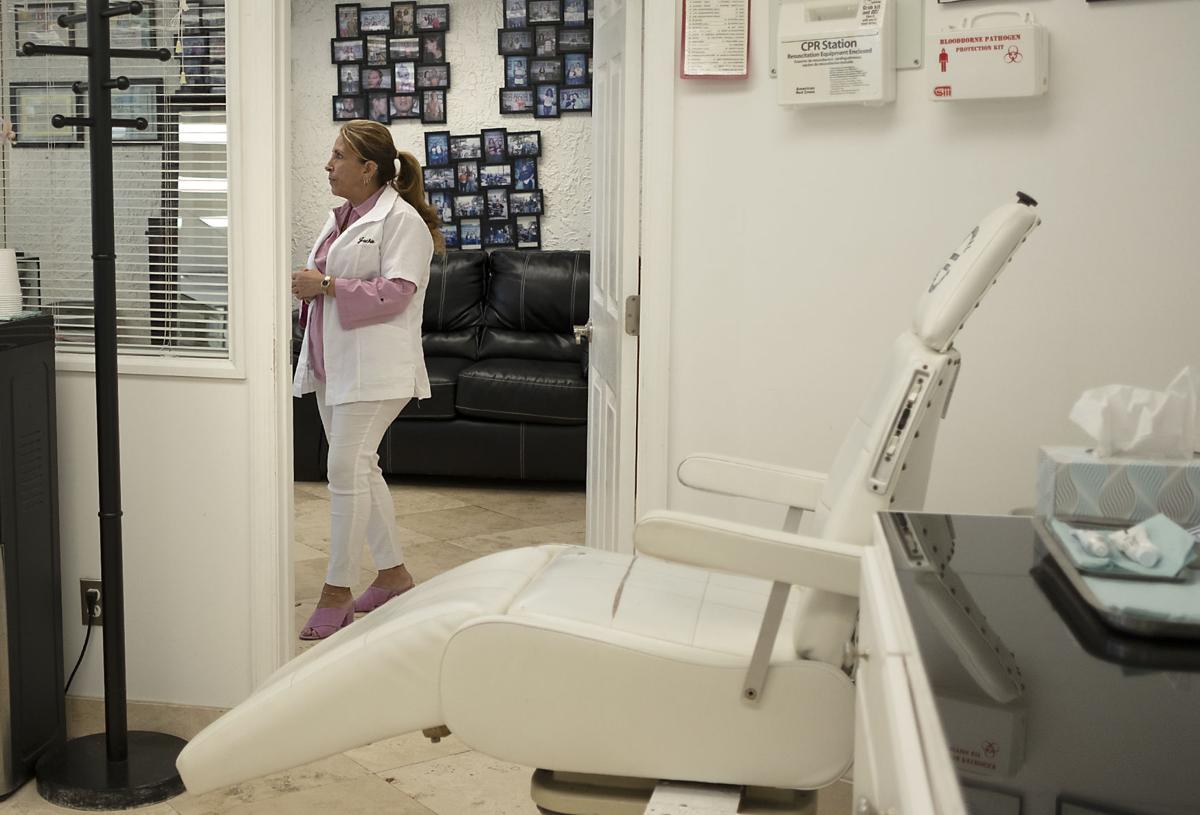 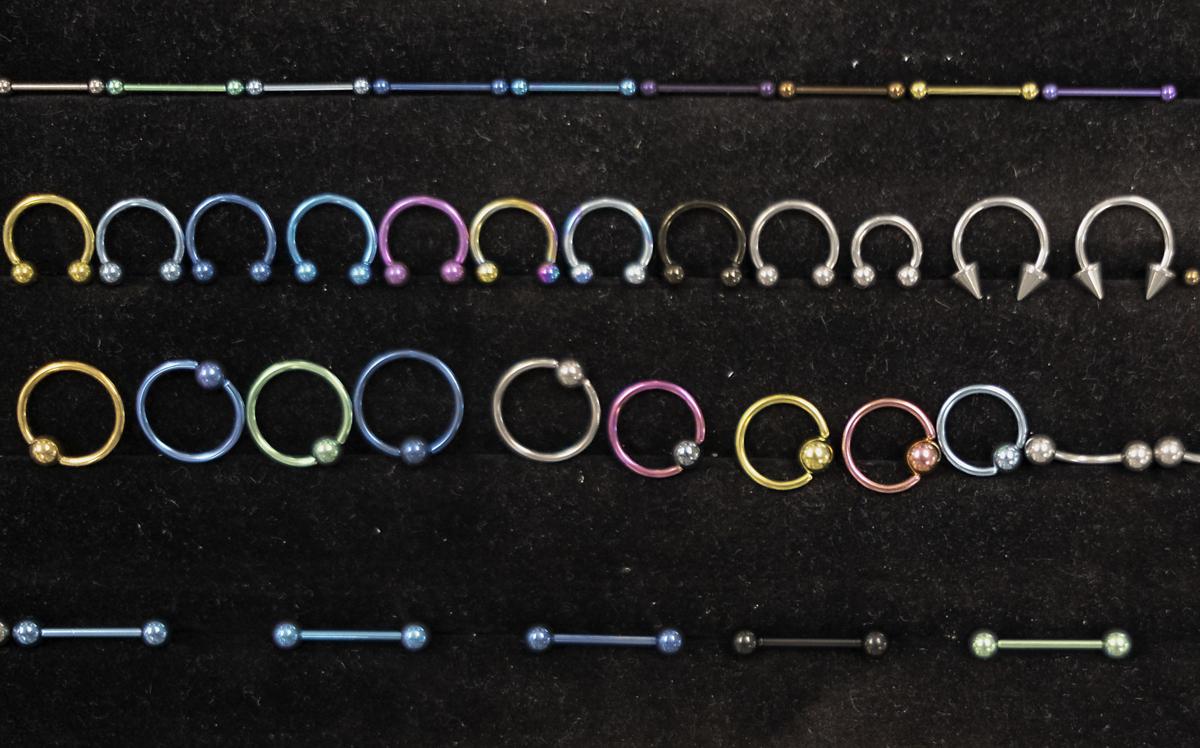 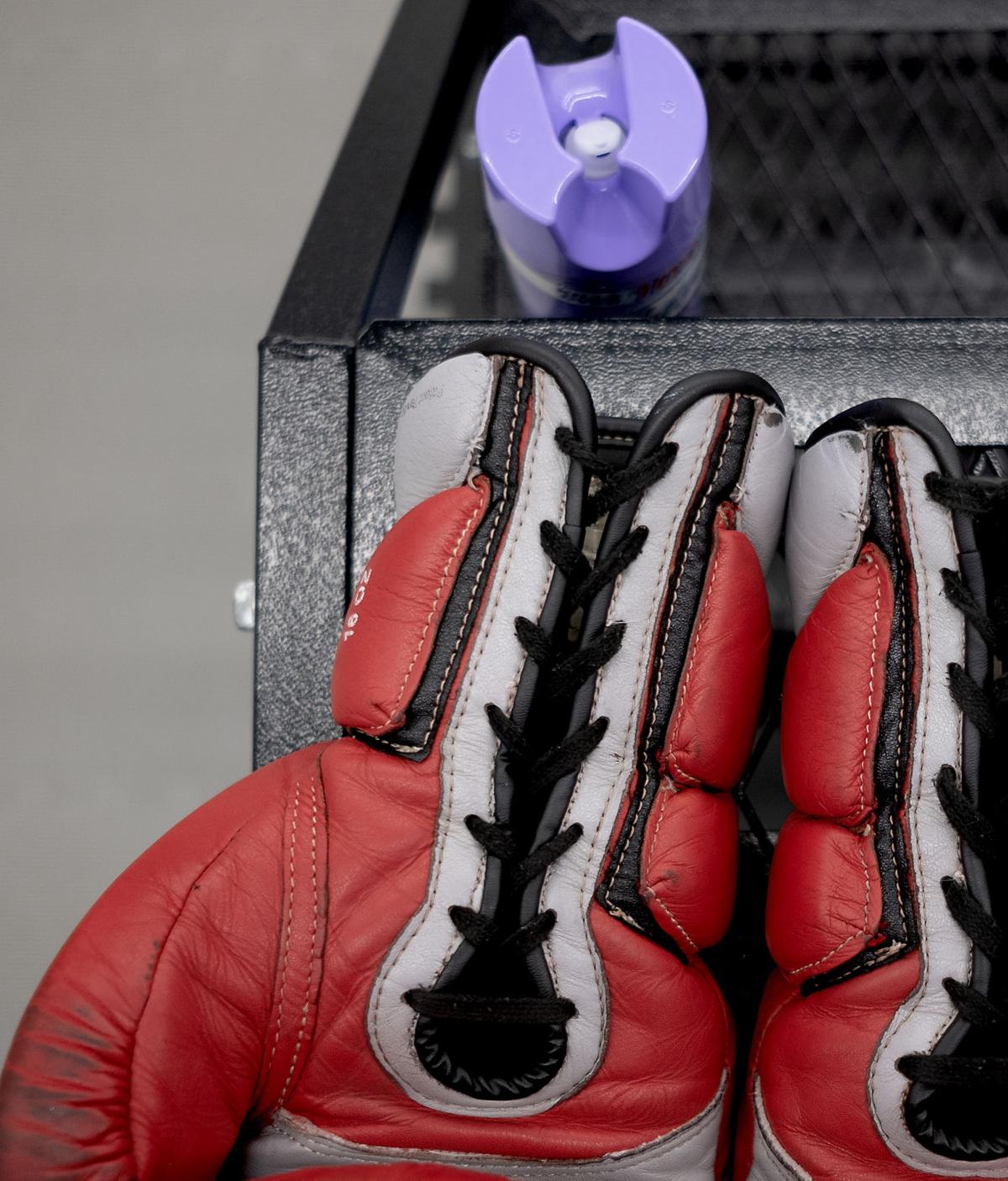 Gloves and Lysol sit side by side at Beast Boxing in Myrtle Beach on Friday in preparation for Monday’s reopening. Photo by Janet Morgan/janet.morgan@myhorrynews.com 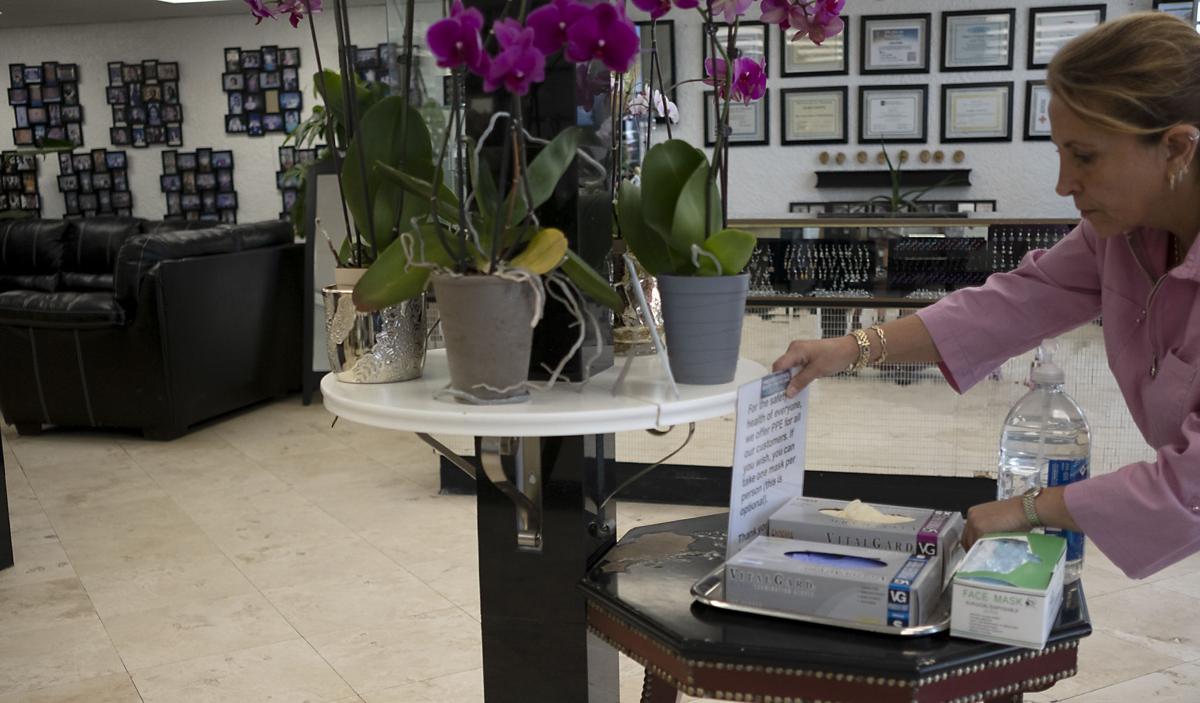 Jackie Chattaj places a sign letting customers know they can use the shop’s gloves, masks and hand sanitizer at Professional Body Piercing by Jackie in Myrtle Beach on Friday. Chattaj said she is ready to reopen her shop off Seaboard Street on Monday. Photo by Janet Morgan/janet.morgan@myhorrynews.com

John Romyns cleans the bags at Beast Boxing in Myrtle Beach on Friday in preparation for Monday’s reopening. Photo by Janet Morgan/janet.morgan@myhorrynews.com

John Romyns cleans up at Beast Boxing in Myrtle Beach on Friday in preparation for Monday’s reopening. Photo by Janet Morgan/janet.morgan@myhorrynews.com

Gloves and Lysol sit side by side at Beast Boxing in Myrtle Beach on Friday in preparation for Monday’s reopening. Photo by Janet Morgan/janet.morgan@myhorrynews.com

Jackie Chattaj places a sign letting customers know they can use the shop’s gloves, masks and hand sanitizer at Professional Body Piercing by Jackie in Myrtle Beach on Friday. Chattaj said she is ready to reopen her shop off Seaboard Street on Monday. Photo by Janet Morgan/janet.morgan@myhorrynews.com

Like others in the community, he’d been busy helping prepare his workplace ahead of the facility’s reopening.

“This is what I love to do,” Romyns said of his job at the gym as a fitness instructor and nutrition consultant.

He’s been able to keep in touch with members about training, sending workout information or simply chatting with them when seeing them in the area.

The boxing gym is one of several Grand Strand businesses that announced plans to reopen Monday, more than a month after Gov. Henry McMaster ordered them to close their doors in response to the coronavirus pandemic.

The governor recently announced that close-contact service providers such as barbershops; fitness and exercise centers; commercial gyms and public or commercial pools would be able to Monday in a limited capacity.

General guidelines have been provided for close-contact service providers, in addition to specific guidelines for cosmetology establishments, gyms and fitness centers and public or commercial pools that are optional.

Beast Boxing owner Shannon Griffiths said the shutdown has not only been tough for her business, but for members who look forward to physical activity and interaction at the facility that helps them stay happy and fit.

The business hasn’t been charging customers with memberships while the gym was closed, and has applied for an Economic Injury Disaster Loan.

Looking ahead, Griffiths said people hit hard by the COVID-19 crisis could spend their money elsewhere.

Ever since opening last summer, the gym continued to experience growth.

But now, Griffiths expects some slowdown.

“We’re a new, unestablished business,” she said. “We definitely didn’t need this in our first year.”

With Monday’s reopening, though, she’s hopeful for better days.

In recent weeks, she’s gotten emails, calls and texts asking when the business will open, and that’s reassuring.

Griffiths believes people are eager to get out their homes for exercise there once more.

“People are ready to get out and start interacting,” Griffiths said. “What better place to do that at than a gym?”

Near U.S. 501, Professional Body Piercing by Jackie in Myrtle Beach has received several calls and customers showing up inquiring if the business was still open in recent weeks, including patrons who regularly visit the Grand Strand in the summer.

The outbreak caused the Seaboard Street facility to shut down for the first time in nearly 19 years, though they planned to reopen Monday.

Owner Jackie Chattaj said about four months out of the year are especially crucial for numerous local businesses.

“A lot of businesses are not going to survive,” she said.

Initially, McMaster’s order was surprising, and Chattaj wasn’t sure how long it would last.

She questioned why beaches would be open, but not businesses like hers, noting customers typically don’t spend long periods in her studio.

While Chattaj was able to get help with her bills through a loan via the Paycheck Protection Program (PPP), she feels for other business owners who might not qualify for assistance.

Further south, Ocean’s Edge Salon & Spa in Surfside Beach was another business that was forced to close.

Since owner Maureen McGrath purchased the establishment in September 2017, she said the business has experienced “tremendous growth” and has done well. The salon had been busy ahead of the shutdown.

And while applying for help may have been “uncharted territory” for some, workers there and other businesses have been able to collect unemployment, and the business also has gotten help through a small business loan.

Still, the money the business lost out on during its closure hurts.

“It’s a very weird time” McGrath said. “There was a lot of uncertainty and a lot of financial insecurity unfortunately.”

Even before the governor’s mandate to shut down, which was effective at 5 p.m. April 1, the business closed its doors out of precaution toward the end of March.

Since then, McGrath has been focused on using her free time efficiently.

She’s been active on social media and even posting on YouTube, sharing tutorials.

The facility itself has also been spruced up, with artwork being installed, a new air conditioning unit a break room being created for stylists.

Additionally, the salon has been organized and scrubbed from top to bottom.

“Time truly has been a gift in so many ways,” McGrath said.

Busy times seem to be on the horizon, as many have asked McGrath about the reopening. This week is completely booked.

“People are dying to get in here,” McGrath said.

Across the board, businesses are excited to be able to open in time for the summer season.

From Easter through the middle of August, there’s a marked increase for sales and services at Ocean’s Edge.

As a result of COVID-19, however, businesses are taking extra safety measures.

At Professional Body Piercing by Jackie, staff members will wear face masks, and customers have the option to do the same with coverings provided at the studio.

Areas like showcases, floors and windows will be cleaned constantly.

One piercing will be done at a time.

Ocean’s Edge has split the staff into two so that each team can work on alternating days and is able to ask certain questions to those looking to make an appointment.

At the Surfside salon, three hairdressers will be on the floor at a time: two on the main floor and one in the back. Staff members will be "sanitizing everything" between customers.

For now, the business is limiting customers to South Carolinians.

Those who come to both the salon and piercing studio will have their temperatures taken by a contactless thermometer at the door.

Griffiths said the boxing gym has also added disinfecting items for equipment and has hand sanitizer and face masks available.

The facility is stepping up disinfecting and sanitizing practices, and keeping members using equipment spaced out.

There are other changes, too, like refraining from the typical practice of giving clients trial boxing gloves and halting sparring and mitt work.

McGrath and other business operators are determined to do what they can to make clients feel comfortable.

While there is some apprehension about the risk of exposure, the salon owner said, “At the same time, life goes on. And we have to be a part of it.”

The S.C. Department of Health and Environmental Control on Monday announced 126 new cases of COVID-19, including one in Horry County, and six …