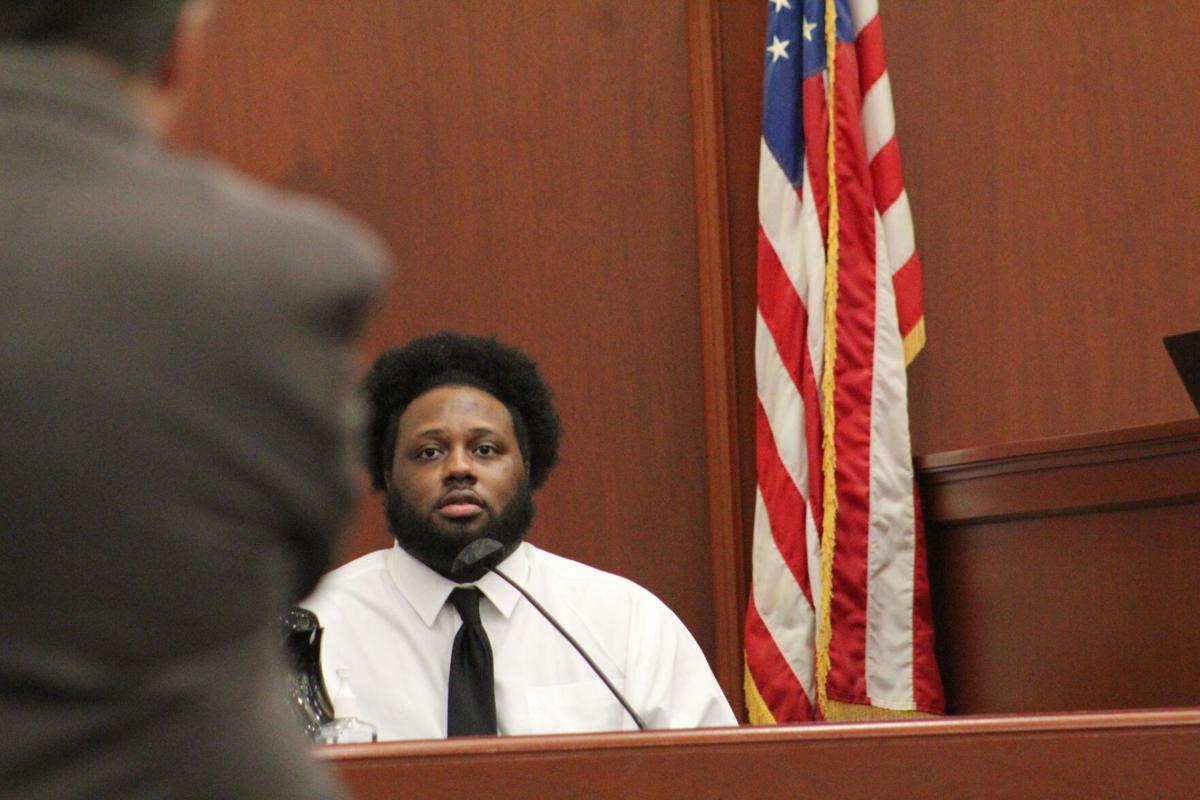 Jakkari Brown takes the stand June 9. Brown is charged in connection to a 2018 murder at RipTydz in Myrtle Beach. 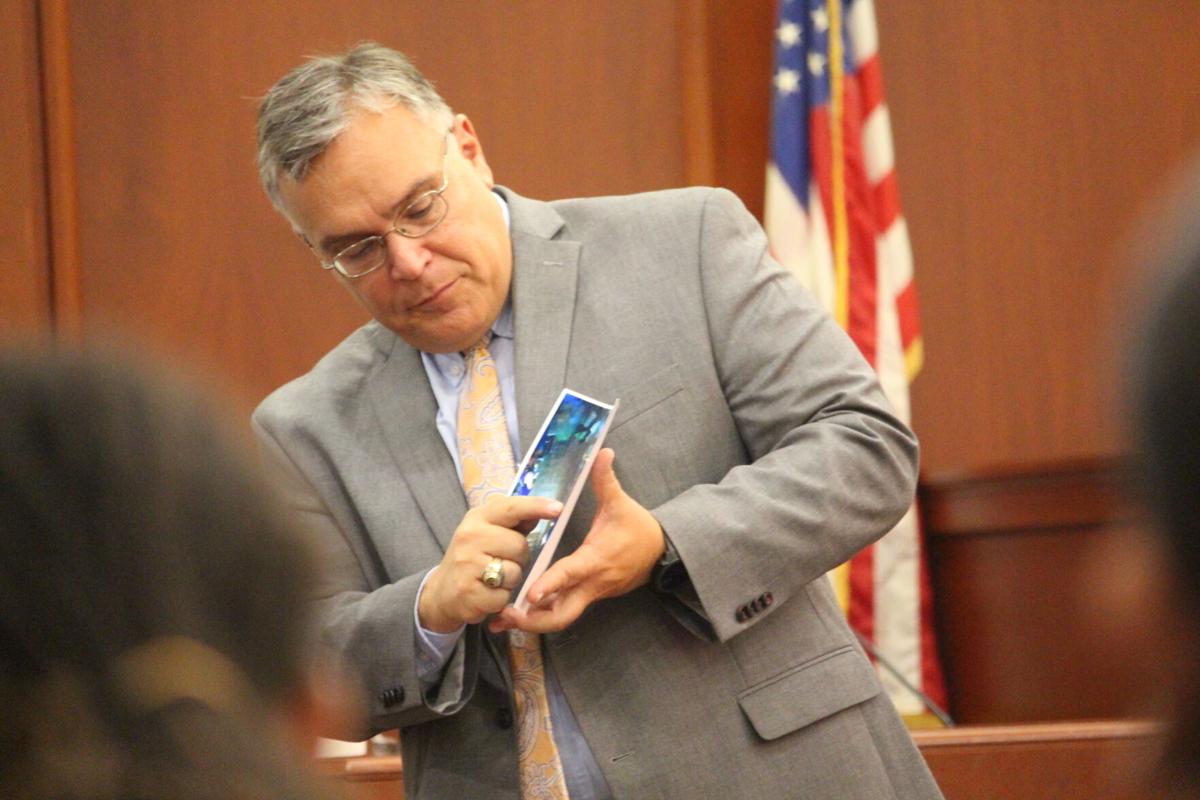 Prosecutor George DeBusk identifies people in still shot from surveillance footage on the night Roger Ramos was shot at RipTydz. 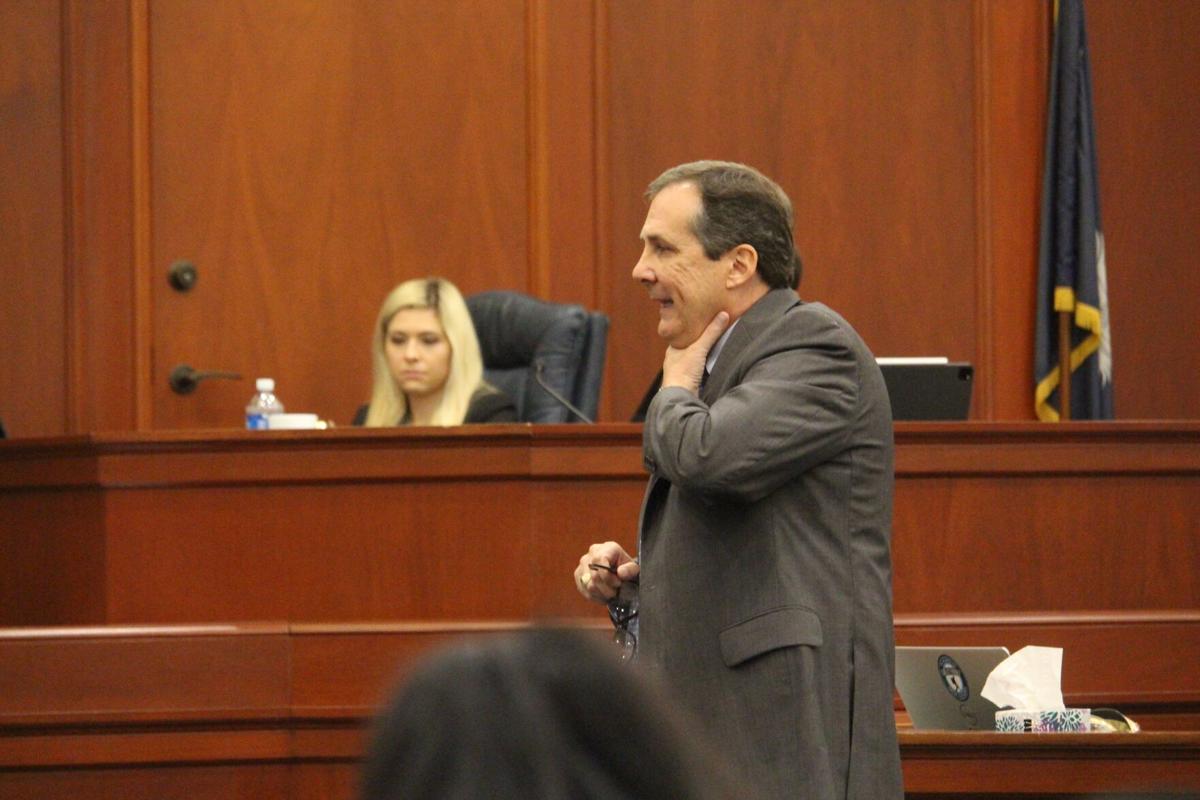 Defense Attorney Eric Fox enacts how people at RipTydz were laying hands on each other the night Roger Ramos was injured.

After less than two hours of deliberation Thursday, a jury found a Georgia man guilty of killing a Myrtle Beach man at an oceanside bar in 2018.

Jakkari Jaquille De'Andre Brown, 26, was sentenced to 35 years in prison.

Brown was found guilty of murder and weapons charges in the shooting of Roger Ramos, who was 25 years old when he died on Oct. 7, 2018. Brown shot him in the face following a UFC watch party at RipTydz Oceanfront Grille & Rooftop Bar.

15th Circuit Senior Solicitor George DeBusk began his closing statement Thursday morning by explaining what happened on the night Ramos was shot. Many people were gathered at RipTydz to watch the UFC fight between Conor McGregor and Khabib Nurmagomedov.

DeBusk argued that since Brown could be seen contributing to the violence that broke out after the UFC fight, Brown couldn’t claim self-defense. He referenced prior testimony of witnesses to justify this. DeBusk said it was obvious that Brown is dangerous because of how a man who worked with Brown at the time had approached him but quickly put his hands up and backed off. Furthermore, based on the actions of Nick Blake and Brown’s other co-workers on surveillance footage, DeBusk pointed out that those around Brown felt he was threatening.

DeBusk said there were inconsistencies in Brown’s version of events, and that discredited him. Brown testified Wednesday and DeBusk noted the discrepancies in his testimony.

“You heard two different stories about what happened and you heard them from the defendant," the prosecutor said. "He said the guy in the pink shirt hit him. But he told police that he didn’t see anyone. He said in court he went to turn himself in. But he also said he changed his shirt because he was going to leave. Things in the statements just don’t fit. He said, 'I never used the front entrance,' but in the video he used the front entrance three times.”

DeBusk then argued that Brown was aware of Ramos because he had to see that Ramos had thrown a bottle toward him in order to put his hands up to block it.

DeBusk made the case that Brown had clearly acted with malice and was therefore guilty of murder.

“He had malice when he said, ‘I’m going to [expletive] you up,’” DeBusk said.

DeBusk also disputed Brown's contention that he had acted in fear.

“He knew he was in trouble," he said. "That’s why he was scared. The fear wasn’t from some bottle. That fear was because he was facing consequences for his actions.”

DeBusk said Brown must not have had much hesitancy since he pulled the trigger.

15th Circuit Public Defender Eric Fox implored the jury to appreciate the incredible feelings of stress and fear affecting Brown in the moments leading up to his shooting Ramos.

Since the prosecution had pointed out disparities in Brown’s original statement and his testimony in court, Fox asked the jury to focus on the substance of what he said.

“Imagine the pressure of Mr. Brown two and half years ago,” Fox said. “I suggest to you any difference is not material. They’re not major things. He told [the police] everything. On the things that matter, he was truthful.”

Brown’s motives weren’t obvious, Fox argued, and that means it couldn’t be proven that he acted with malice. Whatever the action and the motive were, he said, “it absolutely is not murder.”

Ramos' best friend, Sarah Templeton, spoke before the sentencing about the pain of losing such a vibrant person whom she knew well.

"Twenty-six years of laughter, love and memories with Roger is all we have left, when it should have been a lifetime," Templeton said. "This wasn't a mistake that Jakkari made; this was a choice. He made a conscious, sober decision to carry his gun with him on a regular basis, knowing that at any point if he felt scared, he was willing to use his deadly weapon. [Roger] went to RipTydz that night to see his work family and enjoy his night off. He wasn't looking for a fight. If you knew Roger, you loved him. His personality's unforgettable. He was the guy who always made you laugh. He was always the best-dressed person in the room. For 977 days, we tried to find any sense of peace with Roger's murder but we can't. We're searching for closure with this trial, which we can only hope will lead to forgiveness."

Following the trial, Fox said he was glad that Brown got to have his day in court, though the outcome wasn't what he had hoped for.

"Although very disappointed with the outcome, we're grateful to finally get into court and have his side of things heard," Fox said. "What I said was true: everyone who looked at this — the State, ourselves — felt the most likely and proper thing was the voluntary manslaughter but we just couldn't agree on what that sentence was going to be."

With Brown being found guilty, DeBusk admitted that his conviction wasn't a simple win.

"It's a job well done but it's not a victory; two lives destroyed, it's very sad," DeBusk said.

After being sentenced Thursday, Brown said he was sorry for what he did, adding that he hopes the victim's family will be able to forgive him in the future.

Cox Boat Trailer for up to 14' Boat. Excellent condition