The State Law Enforcement Division opened an investigation into allegations of bribery in the 7th Congressional District race following a request from candidate Mark McBride, the agency confirmed Friday.

“I don’t know what happened between Mark McBride and David Hucks, but I knew the whole time it was total bullshit,” said Richardson, who’s running against McBride, incumbent Tom Rice, R-Myrtle Beach, and state Rep. Russell Fry, among others, for the GOP nomination on Tuesday. “I knew I hadn’t done anything wrong. But the public didn’t know that.”

With several candidates announcing a bid for the 7th Congressional seat, U.S. Rep. Tom Rice will enter a crowded primary field for the first time since the district was established a decade ago.

In a letter dated Monday, Deputy Attorney General Donald Zelenka wrote to State Law Enforcement Division Chief Mark Keel that there was “insufficient evidence” in a 10-minute phone call between McBride and Hucks to support finding a violation of state code 7-25-200, which makes it illegal to offer, attempt to offer, or accept anything of value in exchange for filing for state or federal elected office or withdrawing as a candidate for such office.

“There is also insufficient evidence of criminal intent by Mr. Hucks in the 10 minute telephone call,” Zelenka wrote. “I further find that there is no credible evidence at this time that any other candidate made an illegal or actual offer of employment to Mr. McBride or gave David Hucks actual or apparent authority to do so on their behalf.”

On Monday, both Richardson and Hucks criticized the timing of the announcement right before Tuesday’s election.

“I’m mad because they’ve held onto this damn thing until hours before the damn polls open and they come out with this,” Richardson said. “They already smeared my name all over the news. SLED never even called me, they never even talked to me.”

“The timing, we’re done the day before the election,” Hucks added. “For me, the timing is fine but for the candidate that’s falsely accused, the timing is curious. How soon did they know? We knew we had not bribed this man. It’s obviously good news, but I’ll use the word curious. It feels political.”

SLED first opened the investigation on March 14. At the time, McBride had posted videos on Facebook claiming Hucks had offered him $70,000 to drop out and endorse another candidate, adding that the only candidate in a position to make that offer was Richardson. Richardson has consistently denied the accusations.

In the letter, Zelenka said he had listened to the Feb. 28 phone call multiple times.

“A reasonable review of the telephone call is that it was an attempt by a non-candidate to suggest that if the candidates who allegedly had minimal popularity should drop out and support someone other than the incumbent, a position with the new congressman would become available, stating it was similar to when Rodney Berry, an alleged candidate who dropped out in a earlier run against Representative Rice and later became employed as a staffer for the congressman in the District,” Zelenka wrote.

“There was no guarantee by Mr. Hucks or anyone else of a $70,000 job in return for Mr. McBride dropping out,” the deputy attorney general continued. “Both Hucks and McBride were aware of this from a reasonable review of the conversation. In fact, Mr. McBride acknowledged and stated his belief in subsequent public statements that Hucks could not offer a $70,000 job. Finally, there is no evidence that Mr. McBride either solicited or accepted any alleged offer of employment or benefit if he dropped out of the race.”

In the letter, Zelenka said McBride had gone to Horry County police and SLED, which both told him there was no evidence of bribery. But McBride asked 15th Circuit Solicitor Jimmy Richardson to look into it as well, and Jimmy Richardson referred the case to the state attorney general’s office.

“We still think we’re gonna win this damn race," Ken Richardson said. "We think we’ve got a good shot at taking the runoff tomorrow night. I will guaran-damn-tee you there’s no way in hell that Mark McBride and some of these other people will beat me when this election is over.”

Zelenka’s letter said Hucks was not interviewed since he had retained counsel. Hucks said at the start of the investigation that he planned to sue McBride over the allegations, and stood by that plan on Monday.

“I’m certain Mr. McBride is going to be sued not only by me but by other particular candidates he’s defamed,” Hucks said. “My plans are to sue the living hell out of him.”

Ken Richardson said he would wait until after the election to contemplate whether to take any legal action.

“I don’t want to threaten anybody with any legal action,” he explained. “That makes me sound like Donald Trump. I just want a fair election and for the people to have a choice. I that’s why I fronted my own campaign.”

McBride, a former mayor of Myrtle Beach who’s unsuccessfully run for election in other races since, said he stood by the accusations and that he would release a tape of the phone call during a news conference.

“I got the call 17 hours before the polls opening on a two-month investigation,” McBride said. “I think they’re B.S. What I’m gonna present next week after the election, I’ll let the people decide. I’m gonna have a press conference and let the people decide and see if they agree with what the attorney general says.”

McBride had previously declined to release a tape of the call. He said he didn’t release it to back up his assertions in the months before “Because in society today we have to have faith in people not to lie. And that’s all our politicians do is lie all the time.”

He explained, “We have to get where our society can believe someone’s word. I said it, and now we’ve watched the political game take place for three months. And now 17 hours before the election the attorney general does his job. If he had done it two weeks ago, I could have brought the tape out.”

Zelenka wrote that "the current evidence does not rise to the level of probable cause and no prosecutorial action is required."

Hucks said he felt “vindicated," and that SLED had done good work on the investigation.

“Obviously, I knew all along that we hadn’t bribed this man,” he said. “The results are gonna come in tomorrow and this man will be lucky if he comes in at one or two percent in the polls. This was a desperate attempt by a habitual failed politician to rally his campaign with false accusations. It was a campaign ploy, pure and simple. And I don’t appreciate it.” 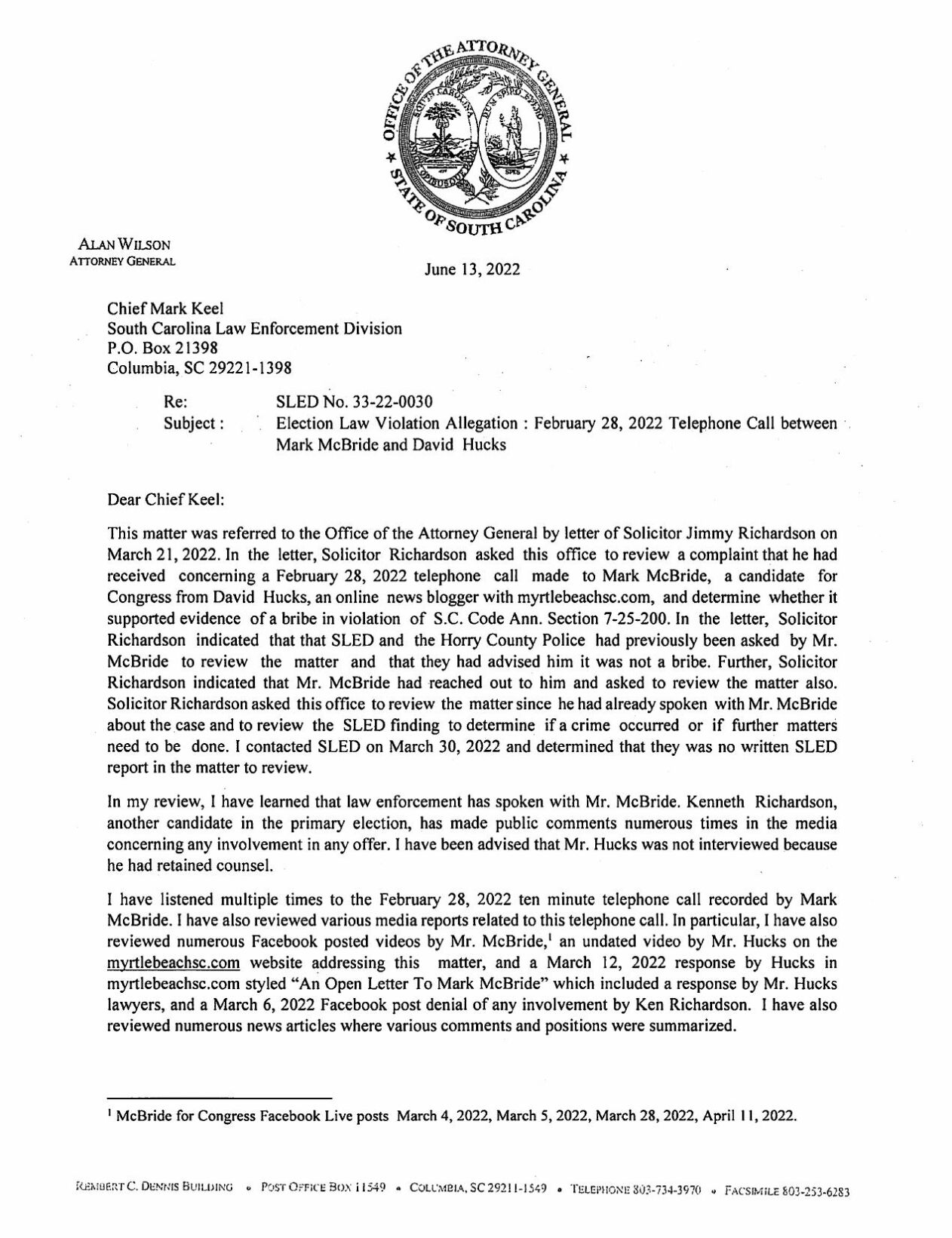