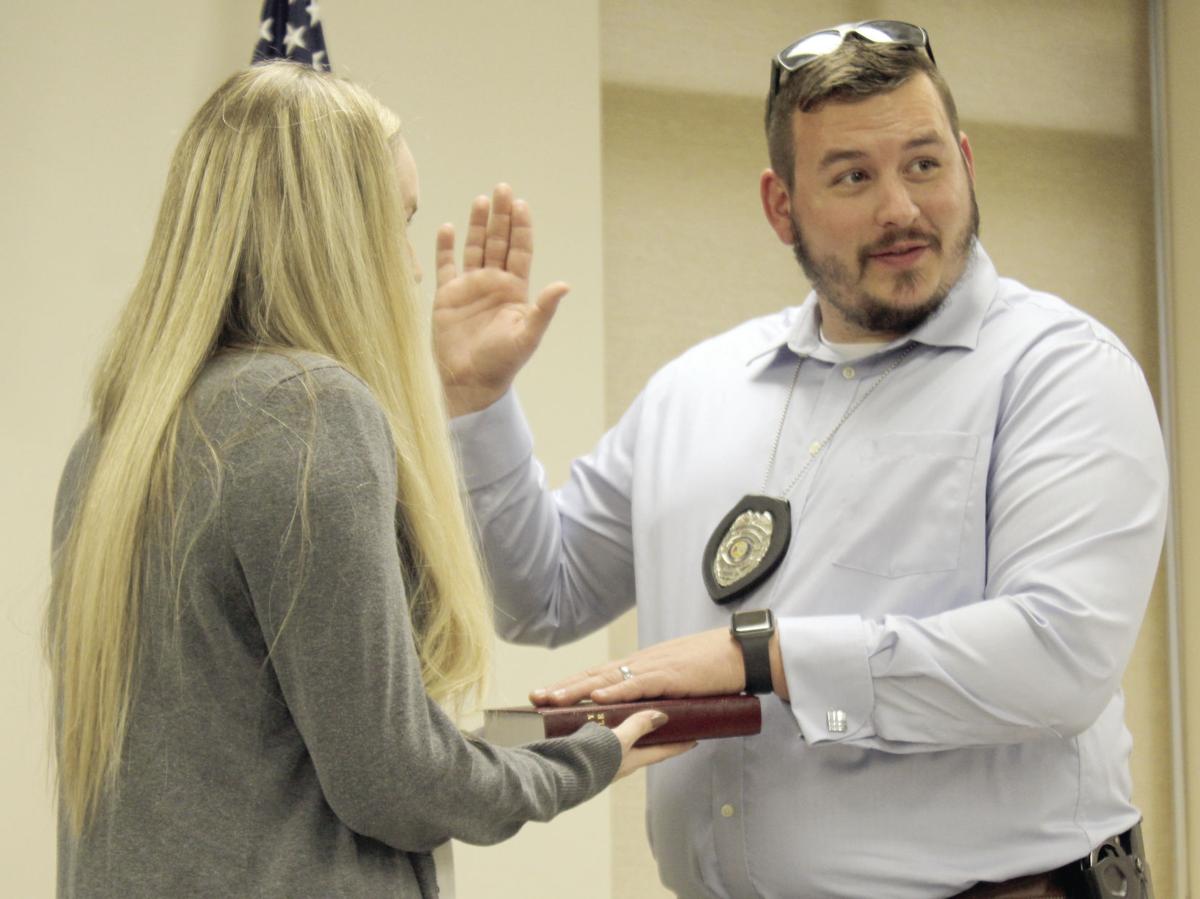 Allan Huggins took his oath as a new detective with the Conway Police Department Friday afternoon. 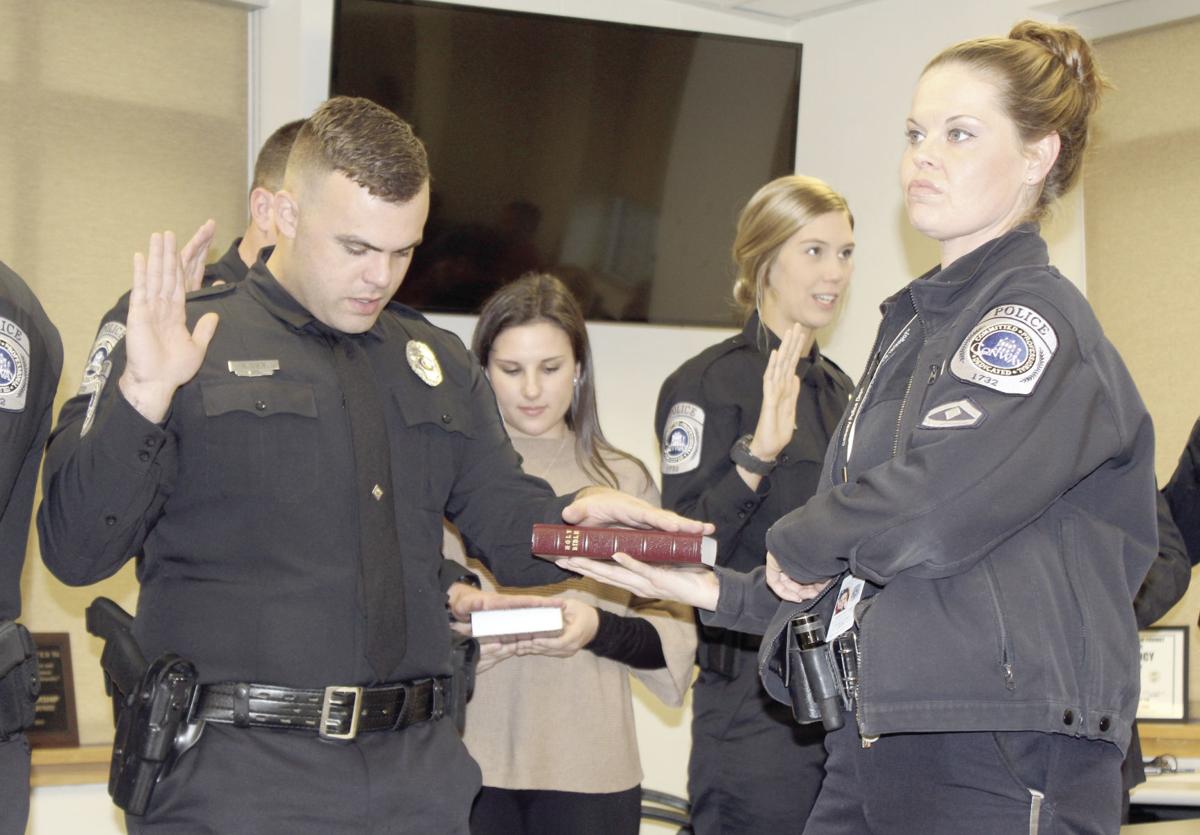 Conway Master Police Officer Amber Todd held a Bible while Nicholas Davis took his oath as a first class police officer at the Conway Police Department Friday after graduating from the S.C. Criminal Justice Academy earlier in the day. 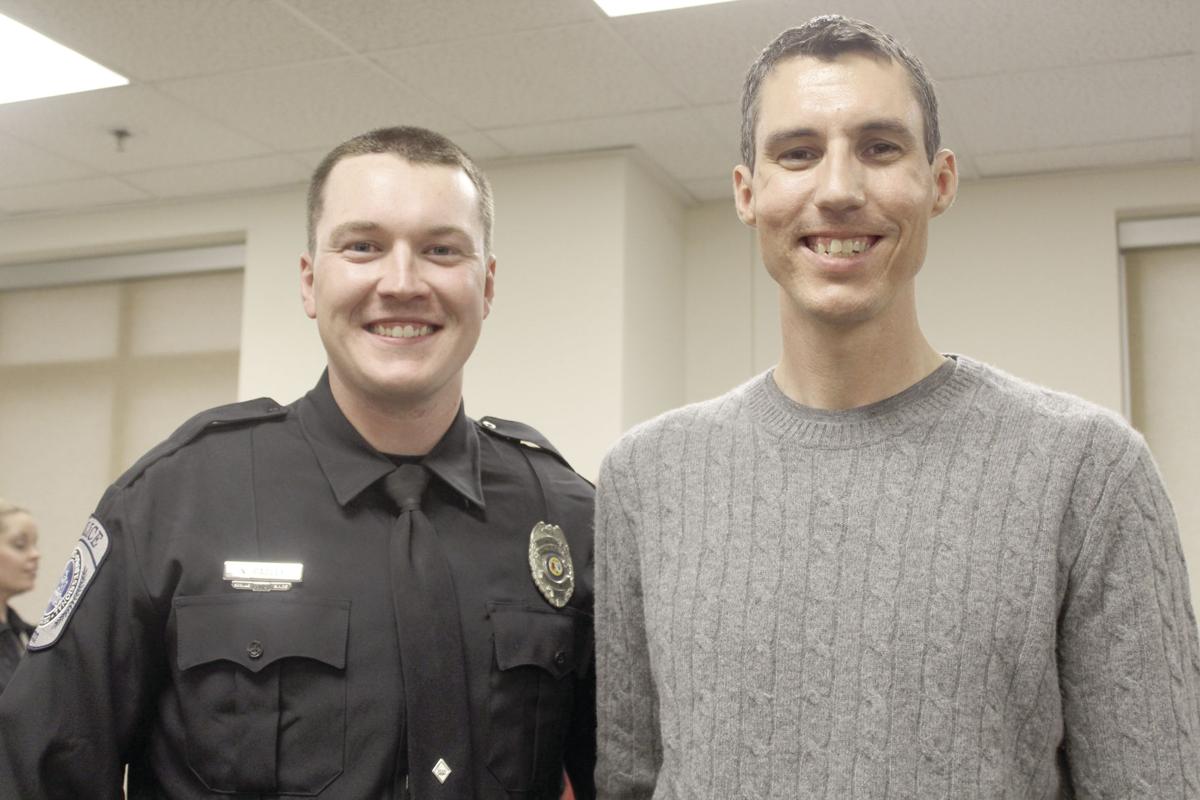 Allan Huggins took his oath as a new detective with the Conway Police Department Friday afternoon.

Conway Master Police Officer Amber Todd held a Bible while Nicholas Davis took his oath as a first class police officer at the Conway Police Department Friday after graduating from the S.C. Criminal Justice Academy earlier in the day.

He had traveled to Columbia earlier in the day where he watched his new recruits graduate from the S.C. Criminal Justice Academy. He watched them walk across the stage and even spoke at the graduation.

The new officers reduced the Conway Police Department’s shortage to only three officers. While that might sound like a lot, it’s the best shape the Conway department has been in for several years.

Long said this was an especially strong group of applicants. In other searches for new officers, the department has culled the suitable candidates to as few as one.

Long said this group of hires put in exemplary performance at the police academy.

He told the new officers, some of whom were set to hit the streets as soon as the next day, “Y’all make us proud. Everybody is safer because y’all are here.”

“Well as we go through the hiring process we have picked up an officer here and there, but this candidate group was especially strong,” Long said.

It was very unusual to find five different officers who were all a good fit for Conway.

“We were fortunate,” he said.

The new recruits were followed by the swearing in of two new Class 3 officers and one new detective Allan Huggins.

Long noted that many of the new officers were sworn in by family members, saying it’s sort of like passing the torch among families.

One of the family members, who came to swear in his brother, was Cory French, who traveled all the way from Los Angeles where he is on that city’s police force. French said he and his brother, Nick Padley, also have a sister, Jessica Padley, who is moving toward becoming a police officer.

French said he was willing to travel across the country for Friday’s festivities because he remembers how much it mean to him when special people came to his swearing in 14 years ago.

He said when he learned that he could be part of Conway’s ceremony he knew he had to come.

French had a vote of confidence for his brother and the entire group that is choosing police work these days.

He said he thinks that this generation understands better what they are undertaking and doesn’t have false expectations about it.

As for the newer officers, he said, “I think they’re ready for it.”

As for his siblings following his lead, he said, “It doesn’t scare me. I know with safety and good tactics it can be a safe job.

“I have confidence that he got good training and he’ll use good judgment and do well,” he said of his brother.

French said he doesn’t think policing is tremendously different in Los Angles than it is in Conway.

Human nature is the same everywhere, he theorizes.

Conway Master Police Officer Amber Todd had the pleasure of swearing in her daughter’s boyfriend and her police mentee, Nicholas Davis.

As for Davis choosing her for the swearing in, she said, “It was unexpected, but I was very honored.”

Caroline Lewis’ mom said her daughter was 18-months-old when she joined the Conway Police Department and now she’s 21, “so it’s all she’s known.”

Seeing her friend become an officer was a pleasure, but Caroline Lewis said, “It’s kind of scary. I don’t know what to expect. Now I have two people to worry about.”

Caroline’s sister, Ashlyn Lewis, commented on having a police officer for a mom.

“It’s nice, like having people all around you. It’s like having another family, that’s how it feels.”