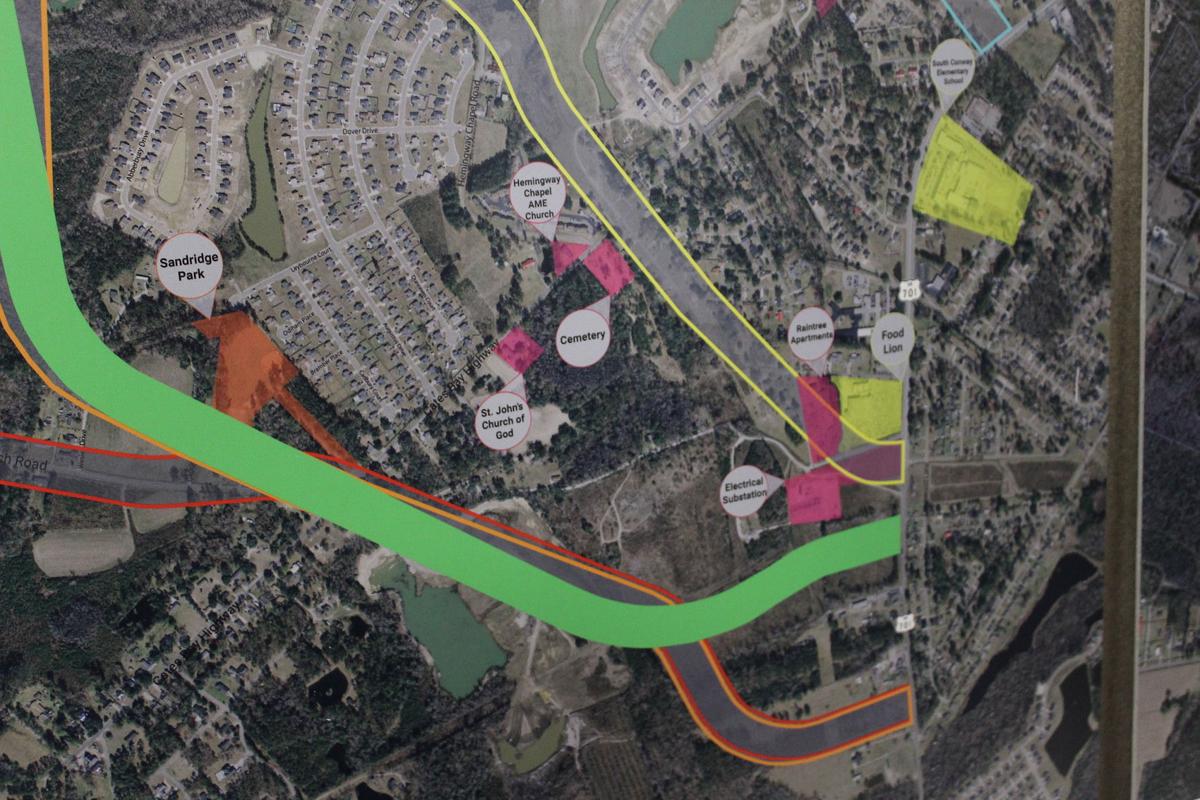 This photo shows a close-up of the proposed route (in green) as it meets up with U.S. 701 South. The full map plus all other previous corridor options can be viewed at http://info2.scdot.org/projects/ViewerFiles/ArtBoard-Allsm.pdf 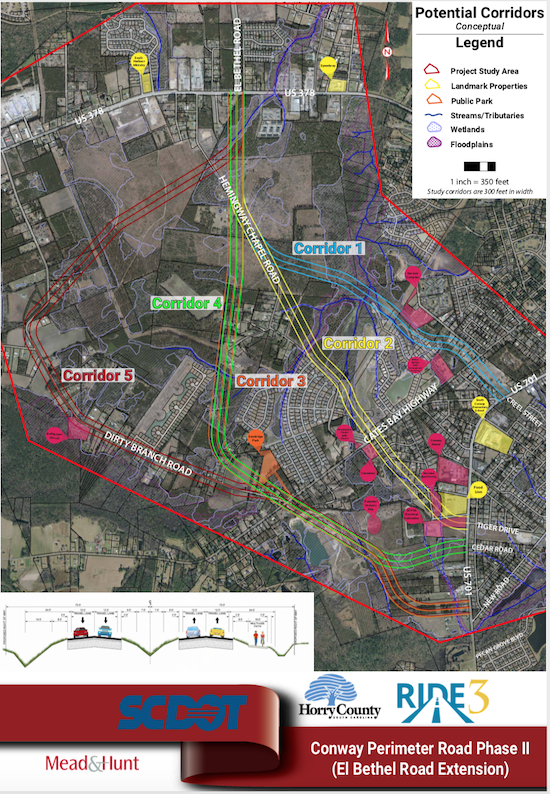 View the PDF in more detail at http://info2.scdot.org/projects/ViewerFiles/ArtBoard-Allsm.pdf

This photo shows a close-up of the proposed route (in green) as it meets up with U.S. 701 South. The full map plus all other previous corridor options can be viewed at http://info2.scdot.org/projects/ViewerFiles/ArtBoard-Allsm.pdf

View the PDF in more detail at http://info2.scdot.org/projects/ViewerFiles/ArtBoard-Allsm.pdf

“It’s a lot of burden to put on people,” Faulk said.

The Ride III Sales Tax Project will four-lane highway with a median between U.S. 701 and U.S. 378 “to contribute to the network of perimeter routes for enhanced local mobility.”

Of the five possible routes on the project, SCDOT revealed that its staff chose Corridor Four, which extends from El Bethel Road in Conway across U.S. 378, over a part of Hemingway Chapel Road, down across the end of Fred’s Lane, down across Wesley Drive and over Cates Bay Road at the end of Dirty Branch Road. From there the route meets up with 701 South across from Cedar Lane.

The preferred route is 300 feet wide, SCDOT officials say, and the route photos shared included possibilities of roadway alternatives on each side, within 150 feet of the roadside. SCDOT says these alternatives “will continue to be refined during the design process in an effort to further minimize human and environmental impacts.”

Faulk said due to those alternatives, people still have to wait to see the final route.

“We still don’t know exactly where it’s going to be,” she said.

Three of the five proposed routes would have gone through Faulk's property, but Corridor 4 will not.

The $13 million project will take the path of least impact, according to SCDOT officials. Their data shows that this preferred route will take up 12 acres of residential land, 33 residential parcels, 12 acres of commercial land, with a total of 54 parcels affected.

No churches or cemeteries will be impacted, according to Berry Still with SCDOT.

The Rev. Jerry Faulk, Mrs. Faulk’s son, believes that the question still remains on how this road will help traffic. He said it will make traffic worse on U.S. 701 South coming onto Fourth Avenue in Conway.

“It’s mind boggling,” Jerry Faulk said. “It is not an idea well thought-out. How is it we talk about new roads when we can’t maintain the ones we’ve got?”

Elaine West-Huggins, who lives off of U.S. 701 South, said this road will make parts of town more easily accessible, but she thinks other routes should take priority over this one.

“If we’re going to spend that kind of money, with global warming causing more frequent and more intense storms, why are we not concentrating on a southern route out [of Pawleys Island area],” West-Huggins said.

Some citizens at the public meeting said they don't believe the new road is needed at all.

Bishop Edward Blain Jr., a 95-year-old World War II veteran recently recognized by his community for his service, suffered a heart attack earlier this week. Some of the other proposed routes would have affected his home.

His relative Cedric Blain-Spain said that the first thing Mr. Blain wanted to know from his hospital bed was where SCDOT decided to put the road.

“It’s a fight on our hands,” Blain-Spain said. “I hate anyone would lose their home.”

He encouraged citizens to be involved in public business.

Matt DeWitt with SCDOT said after Thursday's public comments are processed, the environmental documents will be processed and hopefully finished by early 2020. Right-of-way proceedings won’t happen until later in 2020, and construction should begin in early 2023.

To see all the proposed routes, go to http://info2.scdot.org/projects/ViewerFiles/ArtBoard-Allsm.pdf and for more information go to http://scdot.maps.arcgis.com/apps/MapSeries/index.html?appid=44e39fa0076846ce8c743cf630e7917f